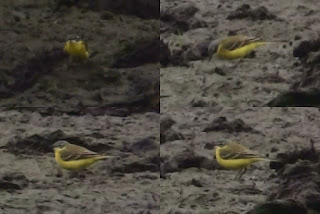 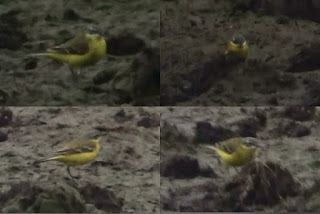 On 27th May 2015 a hybrid Blue-headed Wagtail x Grey-headed Wagtail was discovered by Frank Bird at Mythop Grange, Mythop, where it remained until the following day. The bird exhibited plumage features intermediate between the two forms: a blue-grey hood (darker than Blue-headed, paler than Grey-headed), a poorly defined supercilium (weaker than in Blue-headed, stonger than in Grey-headed), and pale below the eye (absent in Grey-headed). Such hybrids occur where the two subspecies meet in a zone from southernmost Norway east through central Sweden, southernmost Finland, and northern Estonia into Russia (Alström et al., 2003).

On 8th May 2015 Stuart Piner located a trip of 5 Dotterel in a coastal ploughed field at Cockersand. The birds remained until the following day, and one was still present on 10th May before it departed during the morning.Cockersand last hosted a Dotter…

At dusk on 11th February 2015 Chris Batty located a 1st-winter Caspian Gull on the beach at Knott End.Photo montage by Chris Batty.

On 16th January 2015 Dave McGrath located a Dusky Warbler at Marton Mere. Unfortunately the bird was only seen briefly, and could not be relocated during searches over the following days. This represents only the second Fylde record of Dusky Warbler, f…

On 10th January 2015 Chris Batty discovered a juvenile Pomarine Skua on the beach at Knott End. On 12th January Peter Rhind relocated the bird at Cocker’s Dyke, where it fed on the corpses of dead birds until 27th January. The bird occasionally ranged …

On 16th December 2014 Frank Bird discovered a pair of Todd’s Canada Geese with Pink-footed Geese at Todderstaffe. The birds lingered on the Fylde until 31st December, when they were seen at Cocker’s Dyke. They also visited Fleetwood and Knott End durin…

On 3rd December 2014 Jim Sheldon discovered a Shorelark on the beach at Rossall Point. The bird showed well through the winter and was last seen on 31st March 2015. This represented the first Fylde record of Shorelark for over a decade; a pair frequent…

On 1st November 2014 Steve and Jan Beastall discovered a Great Grey Shrike on Lytham Moss whilst collecting dandelion leaves for their pet rabbits. The bird remained faithful to the area around Eastleigh Animal Sanctuary until 2nd February 2015.The las…