The Safari picked up CR, dropped off Monty and aimed the car northwards on a welcome all-dayer at the big reserve an hour's drive away. The forecast was for bright sunshine all day but the windscreen wipers told a different story.
Our first stop was the saltmarsh where the water levels in the pools looked good, lots of oozy mud everywhere but where were the birds to take advantage? Other than a flock of about 400 roosting Redshanks on one pool and a scattering of Lapwings on the other it was virtually birdless. Gloomy too with persistent heavy showers havingus fear for our camera gear and we'd not brought a waterproof jacket - RULE 1 - - Never believe the weather forecast, as the Scouts say Be Prepared! 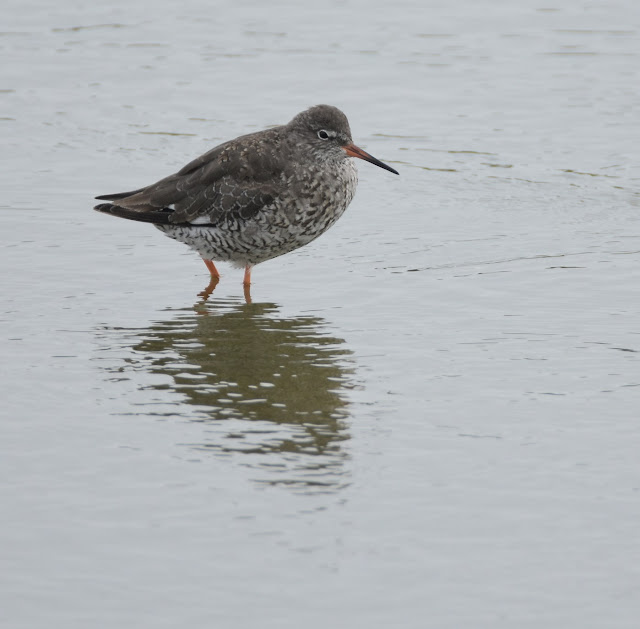 CR found a cooperative Snipe who's ears picked up the noise from our shutter, it went all Wrynecky on us trying to work out where the strange sound was coming from. 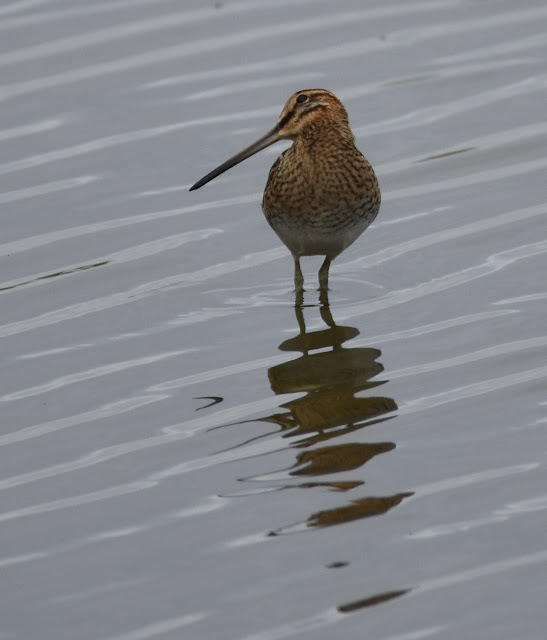 Best of the rest here were a couple of Dunlin, a Black Tailed Godwit, and four camera shy Greenshanks. A Little Egret flopped in to a deeper area to fish for shrimps and a Sparrowhawk causes a minute of mayhem among the waders as it flew over. Away in the distance the cronking calls of a couple for Ravens was heard and we watched them drift high overhead.
Possibilities exhausted we decided to move on to the main part of the reserve, having said that a quick look at the clock revealed we'd been there an hour.
There had been a local rarity on site for a couple of days and with all the overnight rain it was bound to be still present so we headed straight down that way. The hide was full to busting, standing room only! And the words "you should have been here five minutes ago" greeted us. It was just a waiting game now but within five minutes someone had spotted the Purple Heron (167) creep out from behind a dense clump of reeds. We got really views in the bins of this Lifer and filled an embarrassing gap on our list, although for some reason we didn't twitch the one that was here for over a week 20 years ago. Having to stand we weren't able to get the camera through the opening viewing slats in the hide and our picks through cobweb and rain drop covered glass at an angle all hit the cutting room floor.
There wasn't a lot going on other than the heron so we left to let others take our space, there was a steady flow of 'traffic' coming down the path towards us.
The next stop was the feeding station where we soon picked up a Bullfinch (YBC #146) four our Year Bird Challenge. 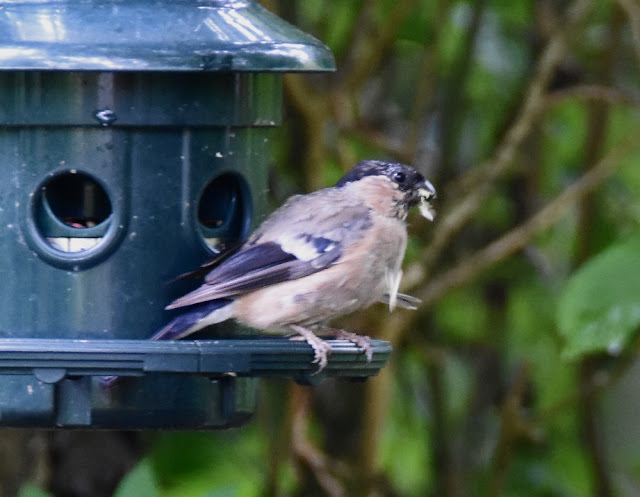 Not the best of pics but what do expect at ISO ridiculous 1/40 sec at 600mm handheld! It's identifiable so it goes on our tally.
We didn't spend long in the nearby hide as it was quite apart from a few snoozing Mallards and some Coots.
By now the weather was trying to perk up a bit and although still cloudy the threat of rain had virtually gone and it was warm and sticky. Walking along the boardwalk through the reeds was quiet - where are all the small birds? A Common Darter dragonfly lifted off the woodwork in front of us, good to see them on the wing as there might be photo opportunities later.
At the hide it was busy-ish but not bombed like the 'heron' hide. There was another "you should have been here five minutes ago" this time we'd just missed the Otter. Never mind it would no doubt come out again shortly - it didn't! But instead an Osprey (168, YBC #147) flew in and landed on the dead tree they always do - if ever there was a need for an artificial platform to be put up this is the place, right on top of the adjacent Scots Pine tree that looks like a Bonsai tree. Never mind the Otters (or lack there-of) and the Osprey there's a Mediterranean Gull flying towards us with a few Black Headed Gulls - best bird of the day no matter what ever might happen later. We called it loud and proud giving directions as to its changing position in the flock but no-one in the hide looked up! Come on guys, bird of the day just flew over and you all ignored/dismissed it - arrrrggghhhh what are you lot like!!
The tree the Osprey was in is a long way off, never mind being in another Post Code it's almost in another County!
Still on ISO Stupid these pics are enlarged by 150%. 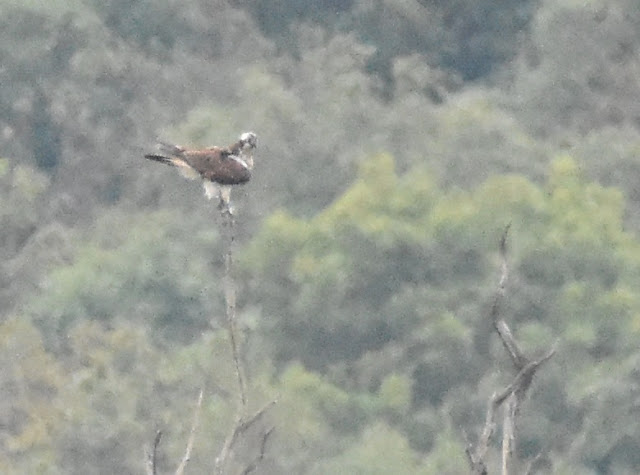 It stayed up there a good while having a little shuffle and wing stretch from time to time which we totally missed with the camera. Despite the distance we could hearing it calling though. 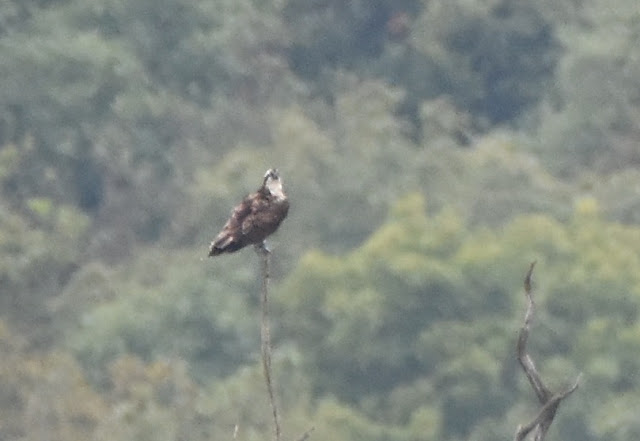 Eventually it took off and had a circle round and gave a half hearted dive over the far pool before swinging round towards us. Now this would be great if it could just dive right in front of everyone, the hide waited with baited breath but no, it veered off up and over the hill to our right...soooooo disappointing! 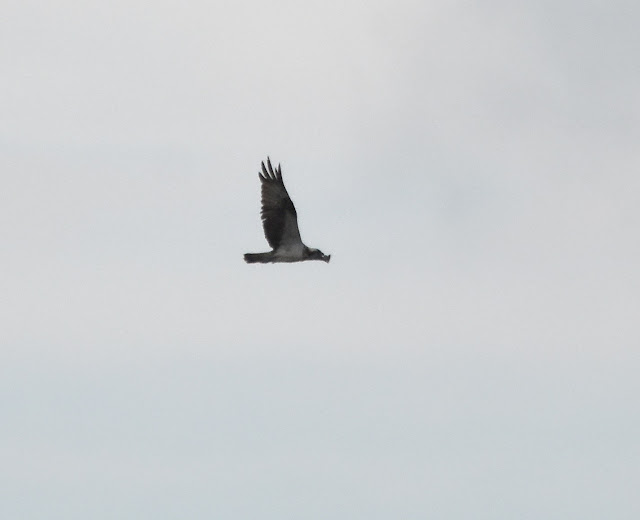 Off we went again on our ramble passing the dyke where we saw Brown Hawkers and what was either a Southern Hawker or an Emperor dragonfly none of which were for stopping.
Little dicky birds were in very short supply along the woodland trail to the net hide, other than a singing Chiffchaff there was hardly anything about. CR did manage a very quick snap at a raptor disappearing behind the trees, a Marsh Harrier, word on the street was they'd already left the  reserve so was this one just passing through? Once we'd turned left down the track to the hide we immediately heard at least a couple of Bearded Tits (169) pinging away in the reedbed a few yards to our left. No chance of them showing unless one did a short flitting flight across the top of the reeds and even then there'd be no chance of a pic - we'll have to be patient and wait until they come to the grit trays later in the autumn.
The hide was empty and so was the view! We sat it out thinking why weren't we here when the Osprey was on its snag as it would have been a lot closer from here and facing us rather than having its back to us earlier. With nothing happening we set off back to the previous hide. Glad we did cos as soon as we opened the door we were told the Otter was showing and showing well it was! For the next quarter of an hour we had stupendous views. 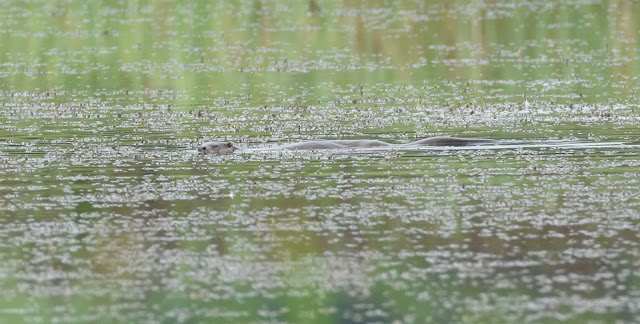 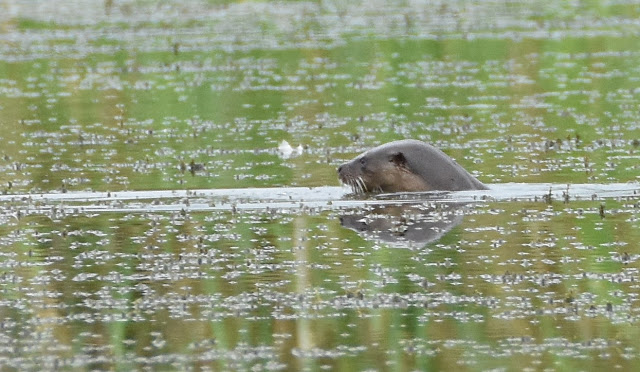 What worries us is we see far more Otters these days than Stoats and Weasels put together.
Now time was starting to push on a bit so we retraced our steps back towards the Purple Heron to see if we could get a better look at it and hopefully some pics. Stopping at the main hide briefly there was a 'normal' Grey Heron just outside the window. 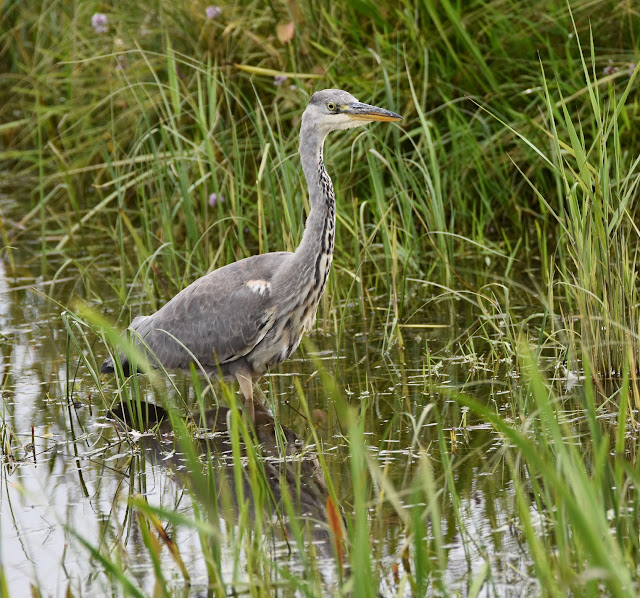 We needed a quick 'pit stop' so C waited at the feeding station and when wee returned he told us the Bullfinch was on a much nearer now.
Off we trundled back to the Purple Heron and this time there was no waiting for it to come out and there were plenty of free seats at the windows. 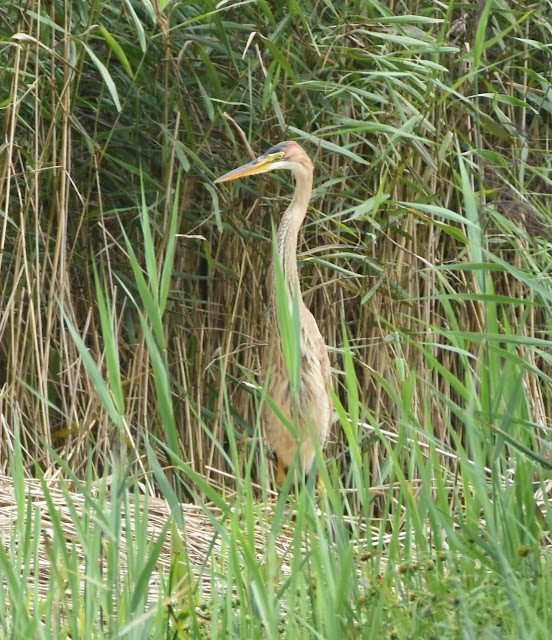 It goes on the YBC list at #145 as we did get some pics earlier even if we did delete them once we were back at Base Camp.
There was a small boy sat next to us who had started birding about an hour earlier but was having trouble seeing the star of the show with his little plastic bins so we put our new Swazzas around his ncck and implored him not to leg it through the hide door. "Wowwwwwww! - How much are these?" he asked looking towards his mum stood behind us. "50 years saving up" we answered, mum looked relieved she didn't have to dash back to the shop in the centre brandishing her credit card. We told him that Red Deer are sometimes seen under the solitary tree in the middle of the view. Some one down the line misheard us and muttered there were no deer to be seen in a stage whisper but seconds later a hind and calf walked in to view - thank you Safari Gods!!! We gently grabbed our little friend's head and turnedd it round - "Wowwwwwwwww - deers!!!!!!!! - this is the best day ever!"
He wasn't wrong! These were the first deer of any species we've seen for at least 20 months, no idea how we've managed that!
They soon returned to the depths of the reedbed and were lost to view, back to the main event then... 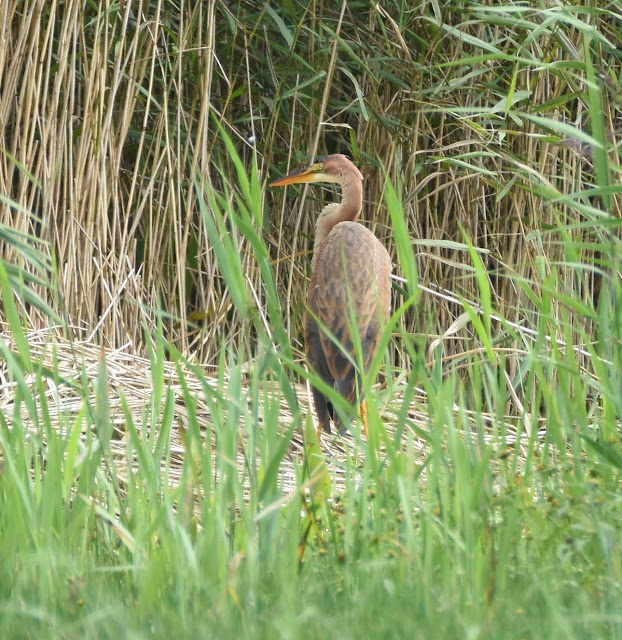 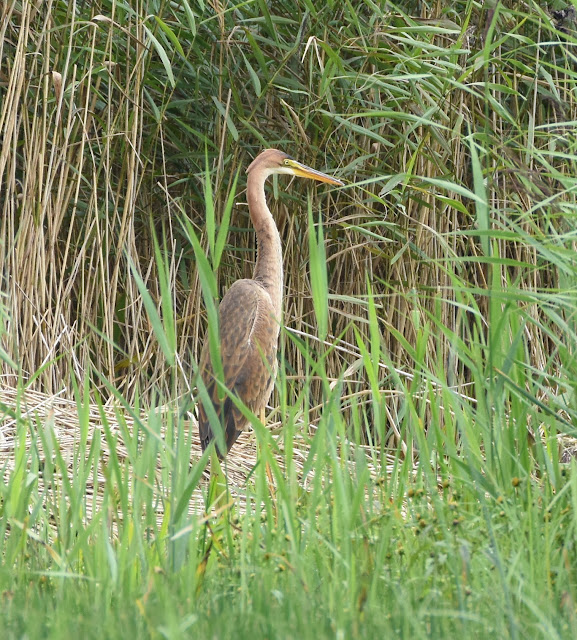 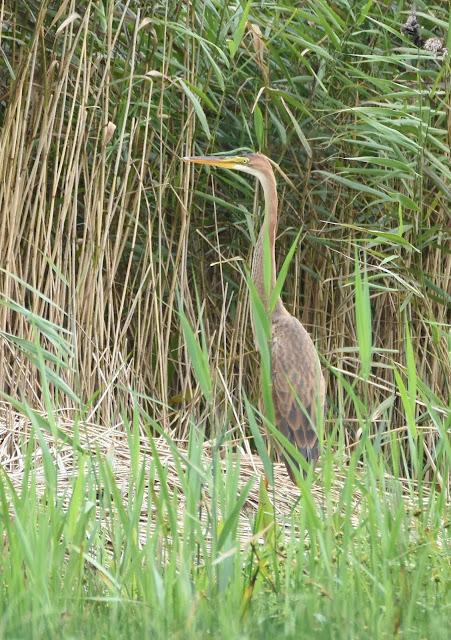 What a great day out and we didn't get wet in the end.
Where to next? Could be anywhere - the adventures are never ending now.
In the meantime let us know who's got all the colour in your outback.