Harrisend.
On Tuesday I made my first visit this year, and not for 8 months since 1 September 2017. I had given up on the Stonechats on Harrisend, but didn't realise it was to this extent.
But there was little joy in the visit, but thankful for small mercies I found just one pair of Stonechat, they were initially atop of the lone Hawthorn. Also seen, 11 Meadow Pipit, at least 4 Willow Warbler, 4 Curlew, 3 Raven, 2 Reed Bunting, 2 Red Grouse, 2 Swallow, and a Wheatear. Up to 8 Greylag came up over the ridge in ones and twos over a couple of hours, and flew off in all directions, though there are some upland breeding records, I have no idea from where. A kestrel and 3 Buzzard, one of which had missing primaries. 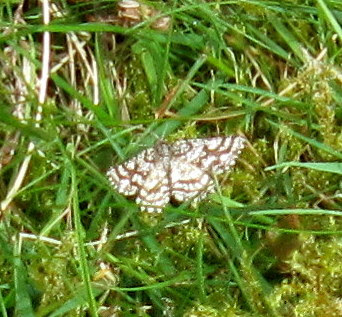 Latticed Heath. Harrisend Fell 8 May. Pete Woodruff.
The sun came out, and within 30 minutes had brought with it 12 Large White butterflies, also a Latticed Heath moth.
Hawthornthwaite.
The visit was thwarted and made brief by the weather, it came on to rain around 2.15pm. The forecast was for a shower in the afternoon, it was still raining four hours later at 6.15pm....so much for the shower! 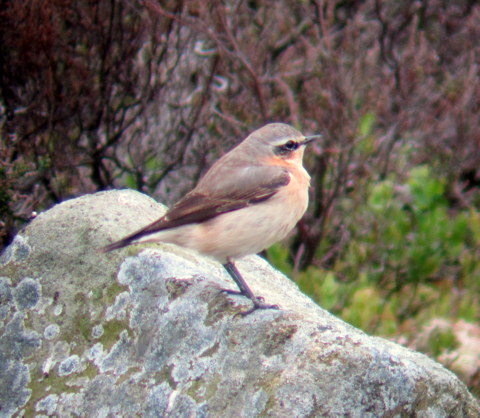 Before the early retreat, 12 Sand Martin, 4 Meadow Pipit, 4 Red Grouse, a Wheatear, and a very vocal Wren.
As a big surprise, I saw a Peregrine Falcon on the day, like other raptor species in Bowland, they have been 'driven' - that's me being polite - to extinction. I have appropriately reported the bird.

A Kestrel hovering before flying off, my first ever over the residential area of Bowerham, if not my first ever in urban Lancaster, also 3 Swift over the same Bowerham area.