I can’t believe it’s six months since my last blog entry. I suppose the travelling we’ve been doing has been with family and football so not all that many birds to write about; well apart from the Snowy Owls at Montrose in Chicago at Christmas, the divers off the coast of Cornwall in February and a visit to Ham Wall en route. OK so I’ve done a bit of birding but spring has been slow this year no more exemplified by the lack of moths in the moth trap.
Oh, and I’ve produced a book on the Pug Moths of the north-west of England (not authored by me I must add!) which has done rather well I’m glad to say.
There have been some excellent local birds recently - Marshside has had a bit of a purple patch recently with Glossy Ibis, Spoonbill, Snow Goose, Temminck’s Stint and a host of migrants. Rishton Reservoir on the other hand has been very quiet apart from the Glaucous Gull that was semi-regular in January. The leak in the dam wall seems to have been fixed and the water levels have remained high - good for the grebes hopefully!
Anyway, the football season is over (and we’re promoted :)), most migrants are in now and breeding is in full swing and bird-report writing needs to start. But before all that was a mini-trip to Bulgaria organised at the turn of the year with John Wright, Steve Flynn, Bill Aspin and Mark and Margaret Breaks.
The flights from Manchester to Burgas were rather restricting - the 11pm flight actually left at 1am on Tuesday 15th May so around 7am we were met by Dimiter Georgiev, our guide and driver for four days of full on birdin’.
Starting off a little late wasn’t too much of a problem as we sped past the enticing Burgas wetlands (that was to be saved for tomorrow) towards the eastern Strandzha woodlands. The area was a mixture of oak woodlands and pastoral farming with all the associated fauna and flora. Birds were everywhere and in good numbers, probably because invertebrate life was also abundant - I can’t remember when the windscreen on my car at home was caked in insect road-kill, but our transport was.
We searched a prime patch of woodland - and after a quiet start, we started to rack up the birds. As well as commoner birds, we got good views of Short-toed Treecreeper, Ortolan, Masked Shrike and Olive-tree Warbler as well as several raptors: Short-toed and Lesser Spotted Eagle, Honey Buzzards and Hobby. Sombre Tits were being rather difficult but we diud get some good, if brief, views. In the background we could hear Golden Orioles and Nightingales wherever we went and in the more open areas, Corn Buntings and Red-backed Shrikes were incredibly common. Dimiter said that there were one million pairs of the latter in Bulgaria - I can honestly believe that in the country the size of England but an eighth of the population.
Everywhere we went, the adornment of Spring flowers and the associated Lepidoptera added another dimension to our enjoyment of the country. The next stop was a more open area as we neared the Sakar Hills, having seen Booed Eagle and Black and White Storks on the way. Here we had a marvellous Eastern Imperial Eagle, displaying Isabelline Shrike, Black-headed Buntings (all over the place), Black-headed Wagtails, Tawny Pipit and Syrian Woodpecker.
Lunch was spent semi-outdoors with nesting swallows as company before we birded other areas for Masked Shrike (as well as Woodchat) and a rather splendid Eastern Orphean Warbler. We headed for an area near the Greek/Turkish border where one of the special target birds, Levant Sparrowhawk showed well along with Rollers, Bee-eaters, Orioles, Lesser Grey Shrike, Rosy Starlings and other really excellent birds.


Our rural retreat for the night was the nicest place we stayed at and we were the only guests. The food was good and the rooms comfortable. Add that to having Lesser Spotted Eagle and Montague’s Harrier from the surrounding roads and the hedgerows supporting more Orioles, Nightingales, Buntings and Eastern Olivaceous Warbler, what’s not to like! 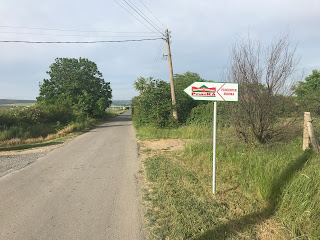