Following on from Wednesday’s post about the wholesale Killing of Ravens here is another troubling story. This also concerns Natural England.
Natural England is an executive non-departmental public body, sponsored by the Department for Environment, Food & Rural Affairs. It is the UK Government’s adviser for the natural environment in England – “helping to protect England’s nature and landscapes for people to enjoy and for the services they provide.”
December 7th 2018 via Jason Endfield blogger and environmental campaigner http://jasonendfield.weebly.com
“Natural England recently confirmed that they issued licences to shoot at least 40 species of birds between 2015 and 2018. The list of species makes for shocking reading and includes such treasured British birds as Curlew, Skylark, Blackbird, Great Tit, Red Kite, Moorhen, Mute Swan, Kestrel, Ringed Plover, Peregrine Falcon, Golden Plover, Robin and Wren.” 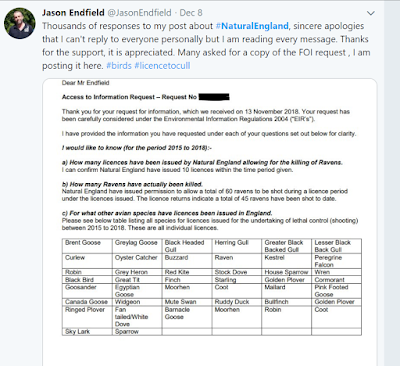 Natural England's Kill list
The list surfaced after Jason Endfield made a request under Freedom Of Information (FOI) as part of his campaign to stop the cull of English Ravens.
Readers will immediately identify a significant number of the species for which shooting licences have been granted are classed as endangered and feature on the Red and Amber lists for birds of conservation concern. This includes Skylark, Golden Plover, Curlew, Ringed Plover and others, all in need of the most urgent conservation. Such species repeatedly feature on Internet birding sites, newspaper articles and other outlets as a means of alerting the general public to the demise of many species of birds in the natural environment.
“Natural England say that these are all 'individual licences' permitting the 'lethal control (shooting)' of the said birds. The list doesn't include any species listed on the CL12 'Air Safety Class' licence or General Licences GL04, GL05 and GL06, so the actual number of species targeted is likely to be much higher.” (This licence allows for the catching or killing of wild birds on or near an aerodrome for air safety purposes.)
The news that so many of our most loved and familiar species of birds have been shot is quite appalling, potentially even more so when it appears that Natural England nor the licensees have  shown due diligence or completed the necessary checks of the supposed facts.
The list shows that Natural England hand out licenses to people who cannot identify the birds they wish to shoot and that Natural England itself does not know even the correct names of birds they “help to protect” but allow people to shoot.
From the FOI request above - “Fan-tailed/White Dove”. There is no such wild bird on the British List. Presumably the applicant means Collared Dove but cannot recognise one or even name it correctly?  So once in possession of a licence they could easily shoot one or more Turtle Doves? Or a raptor that flies in a similar manner to a small dove – a Merlin or a male Sparrowhawk?
“Sparrow” - how will the applicant distinguish between House Sparrow and Tree Sparrow, not to mention Dunnocks and other small birds? Will they kill all small brown birds just to be on the safe side?

"Finch". Which species of finch does the applicant want to shoot? All of them? Greenfinch, Chaffinch, Linnet, Brambling, Bullfinch, Redpoll, Siskin?
The lack of knowledge displayed by the use of misspelt “Black Bird”, Sky Lark”, “Oyster Catcher”, and “Widgeon” is very worrying and suggests to me that the applicants require to prove their fitness to even hold a gun licence, never mind own the added responsibility of shooting wild birds. The fact that Natural England can not identify and correct such basic errors shows a lackadaisical approach to their important role in judging applications.
While the specific reason for each of the licences being issued above is not known, can there be any justification for shooting a Wren, Robin or a Skylark? To even the most jaundiced eye these are harmless birds and there can be little defence in allowing their slaughter.  As a nation we issue licences to kill threatened birds just because they are are in conflict with human activity. This needs to stop. 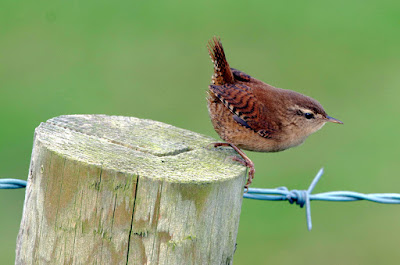 Wren
I intend to write to my Member of Parliament about the apparent lack of checks, balances and lack of accountability displayed via Natural England’s response to Jason Endfield’s email.
I would urge others to do the same.
Alternatively, write to Natural England, County Hall, Spetchley Road,Worcester, WR5 2NP. Email enquiries@naturalengland.org.uk.
Or read how to make a Freedom Of Information request at https://www.gov.uk/government/organisations/natural-england
Good Luck.