The Safari had a wont to have a peek at the rarer geese that had been found last weekend in the fields and marshes Over Wyre. Our first port of call was the farmland bird feeding area where there were numerous Tree Sparrows, always good to see them, and Chaffinches but at the back of the flock was one of target birds for the day a nice tidy male Yellowhammer (PYLC #82). Lens issues meant that this was the best pic of it would could get and lens issues were to be a feature of the day! 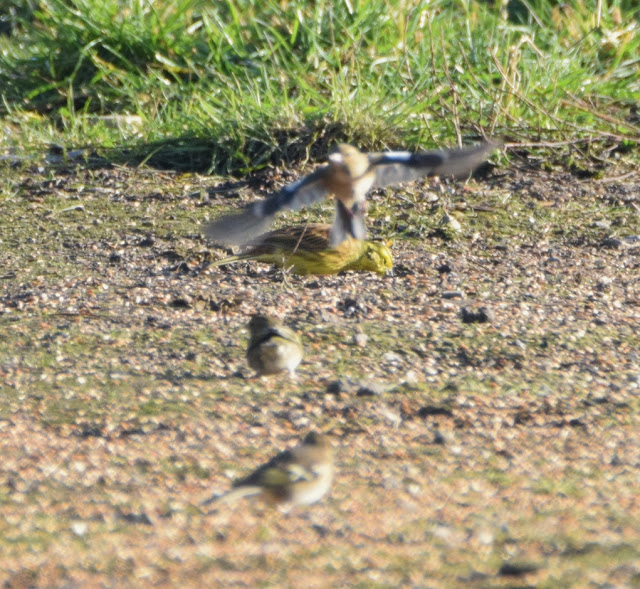 We waited around for a good few minutes seeing a few Reed Buntings at the dropped seed but no sign of the much scarcer, and another of the day's target birds, Corn Buntings. Just round the corner from the feeding area is where the scarcer geese had been seen, feeding on waste potatoes left in a muddy field. A birder was already scoping the small flock but had had no joy. other small parties of Pink Footed Geese were dropping in every few minutes or so and there was a much larger flock on a pasture field but hidden behind a hedge. We left him to it and went for a look at the feeding station at the other end of the village, where we had a Great Spotted Woodpecker tapping away in the large tree beside the car and we did see a couple of Corn Buntings but were unable to get pics as we were looking right into the harsh low morning light.
Turning back to find out if there was any better news from the goose flock we passed a Barn Owl hunting a small patch of rough ground. It was too often obscured behind the hedge from our very limited vantage point for good pics especially as we were trying to not get any 'hand of man' in the frame - it does make life tricky! After a while it flew right over us and away over the field across the road. Now was the time for that gorgeous full frame shot...but Lens Issues....arrrrggghhhh and we got lots like this - oh no man! 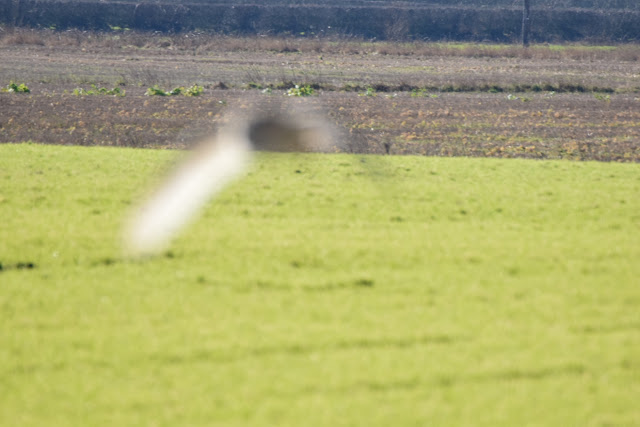 Back on our side of the road it hunted the field again for a while before moving away along the ditch to hunt a more distant hedgerow. We waited for a good while for it to return again hoping for that full face pic but it was so intent on hunting it didn't even register our presence.

A 100 yards down the lane there was now a little posse of goosers but between they they'd had no success. By now Monty had been in the car too long so we took him up to the nearby picnic area for a run and sniff. We had a drive down the adjacent lane and back first seeing a good sized flock of mixed waders including Curlews (PYLC #83) complete with more lens issues, Lapwings and Black Tailed Godwits but no (hoped for) Golden Plovers.
At the picnic site it was simply gorgeous, sunny and warm with barely a breath of wind - it's not often like that when we visit here. Out on the marsh there were a tidy number of Pink Footed Geese and lots of Shelducks further out on the mud. Overhead we heard the 'trilleeps' of passing Skylarks and the odd snatch of song. It was great to be out there at peace with the world just soaking up the view and sounds across the marshes to the snow covered heights of the Lakeland fells.
Far in the distance we spotted a dot winging its way towards us which had a falcony jizz about it and sure enough once in range of the bins it was indeed a Peregrine. The big question now was will the lens focus on it? Just about in the nick of time as it passed high overhead the lens locked on for PYLC #84. We'd already got a cracker of pic of a Peregrine 'in its usual place' so not allowable for our challenge and so we needed to get a flight pic, could still use a better one but this one will do just fine for the time being. 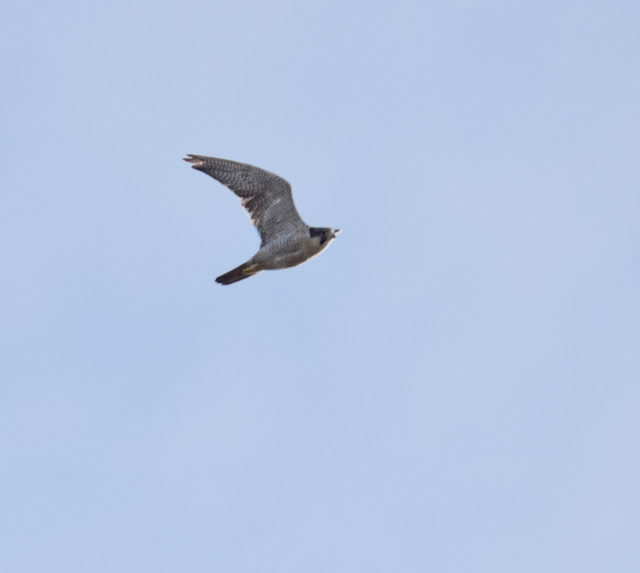 Out on the marsh the geese were getting closer but we couldn't find the recently reported Brent Goose, it may well have been well out on the interface of the marsh and mud or down a creek somewhere in-between.

It was very atmospheric out there - just lovely.
We had a wander round the track by the pool and played a bit of stick with Monty, enjoying the dappled sunlight under the trees illuminating clumps of Snowdrops. 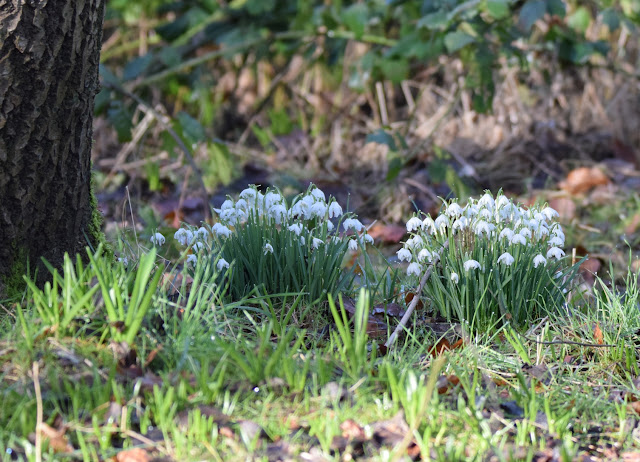 So we didn't see any of the geese we'd hoped for but who cares it a beautiful day to be out on safari no matter what we did or didn't see.
Later in the week we had a couple of wanders around Stanley Park lake with CR. The first day was overcast and gloomy but for the second we had pretty good spells of sunshine. Here's a compilation of the two days pics in no particular order.
The regular wintering Black Headed Gull VLJ from Denmark (or is it Norway - we can't remember) has returned for its umpteenth winter - good to make its acquaintance it again 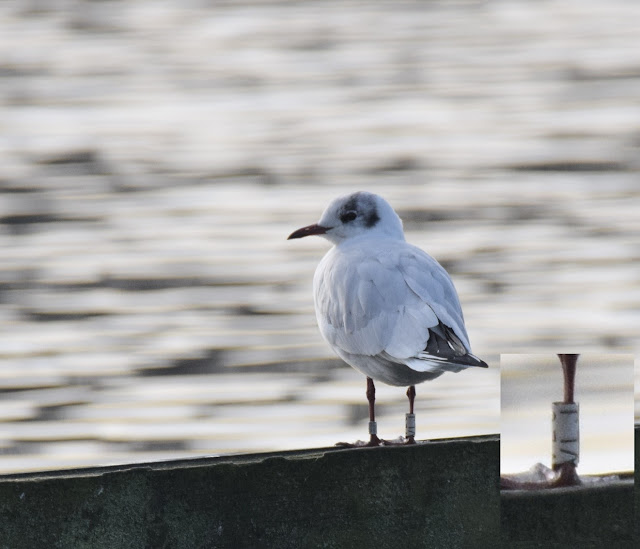 There are plenty of Coots on the lake forcing their way through the intolerable mass of Azolla. 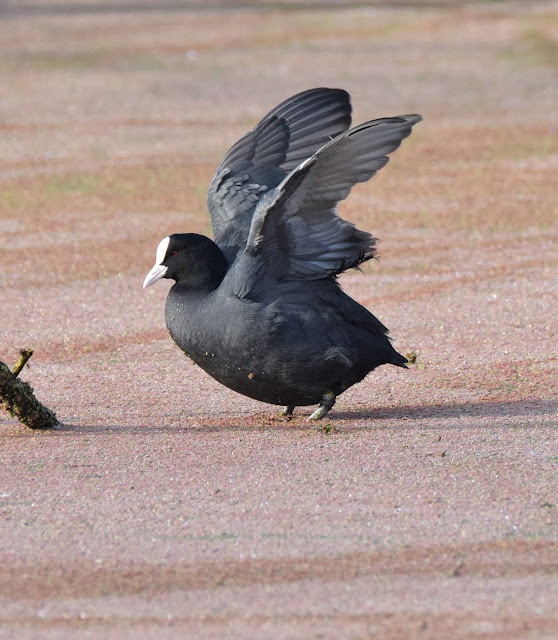 The Cormorants won't swim through it although there's probably np point as there won't be any fish in the deadzone beneath it.
The Gadwall don't seem to mind the Azolla, in fact they appear to be only birds that are eating it. 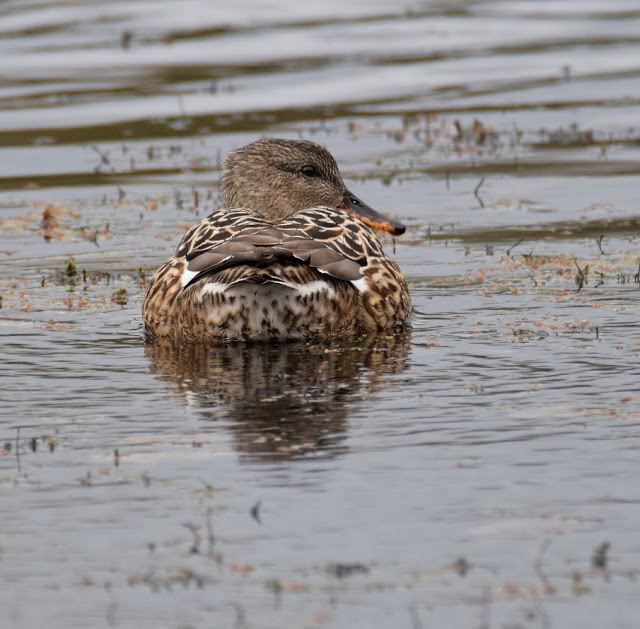 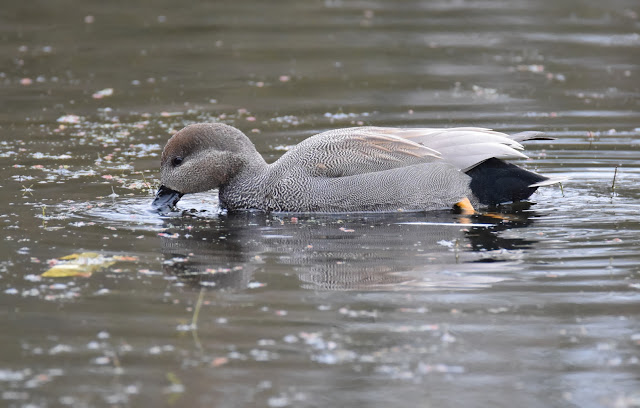 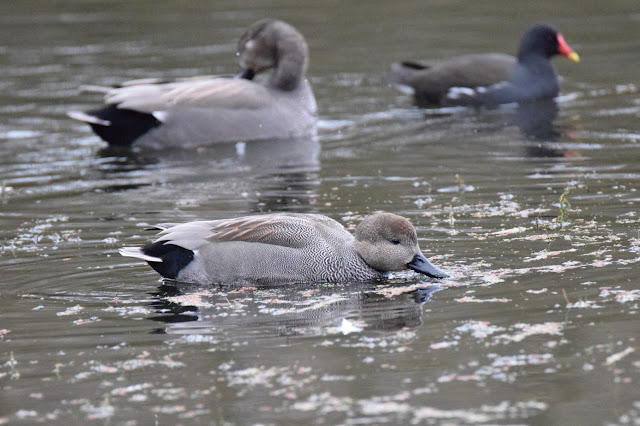 Is there anyone left out there who isn't aware of the insidious affect of plastic pollution on the worls's wildlife, well it's here too, our Great Crested Grebes are trying to build their nest with it rather than the traditional water-weed. 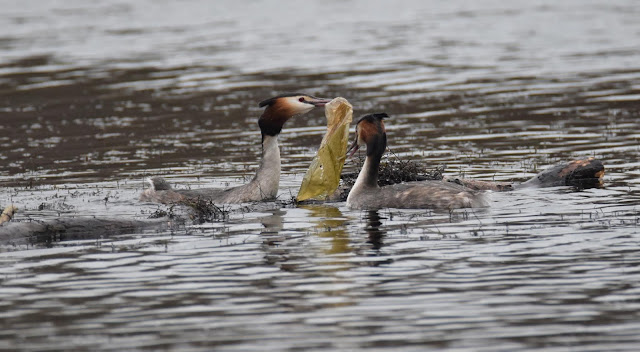 Sometimes we see pics of birds from foreign parts and get a little bit envious of the colours some of the have, but then ewe look around at our own 'common or garden' species and hey-ho that myth is dispelled those Great Crested Grebes are a bit bonny and their courtship dance is something special. All going to prove that you don't need to go far from your own front door to see some awesomely special wildlife. 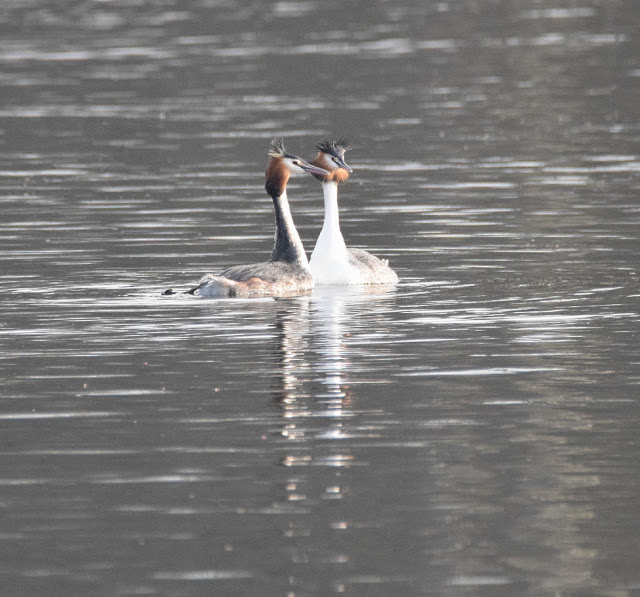 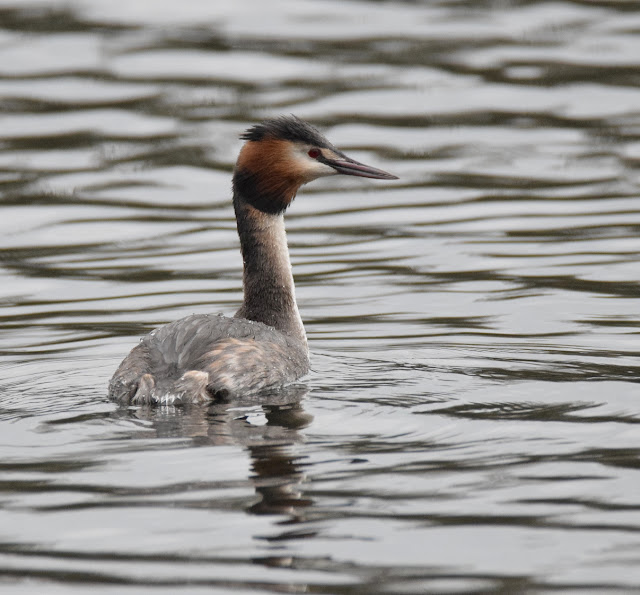 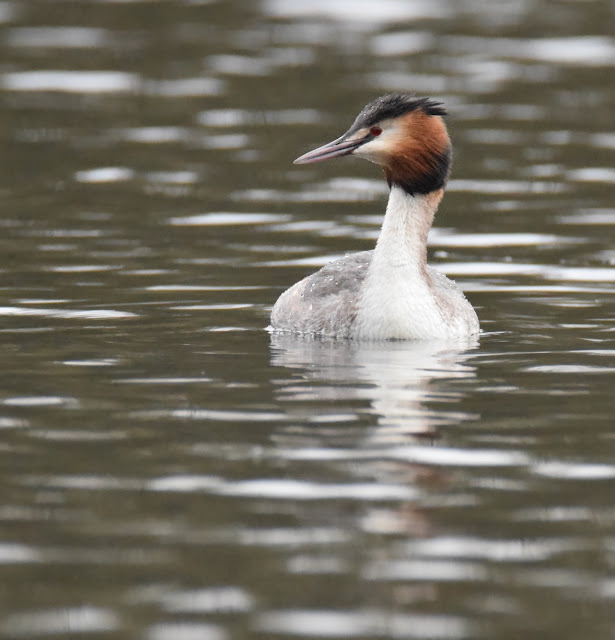 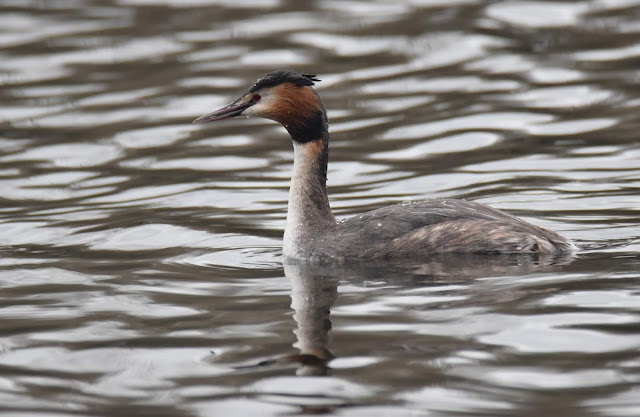 And the third, unpaired bird, caught a Perch right below us as we were crossing the bridges. 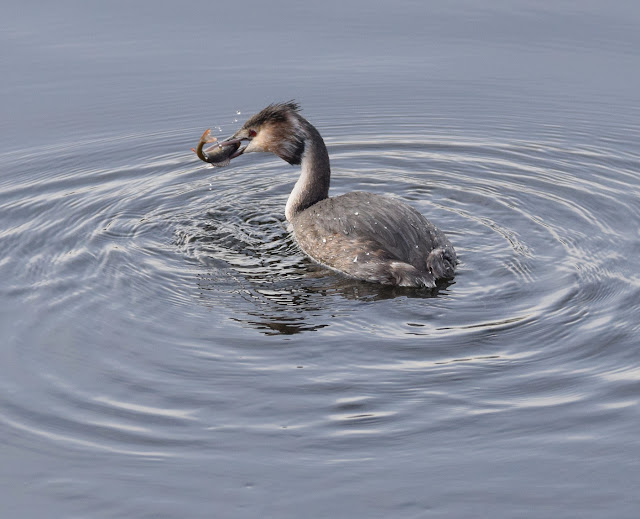 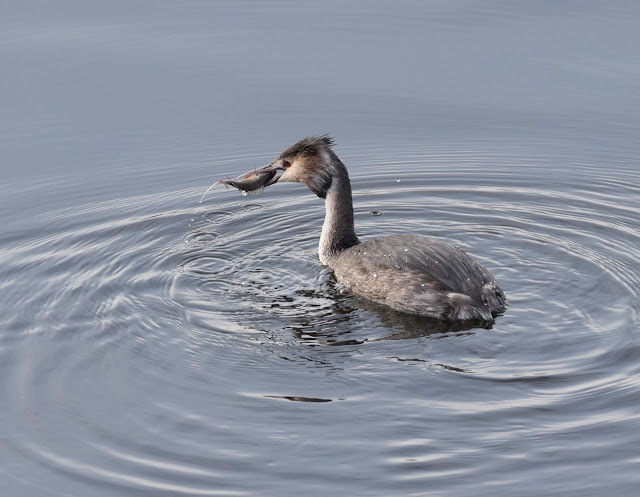 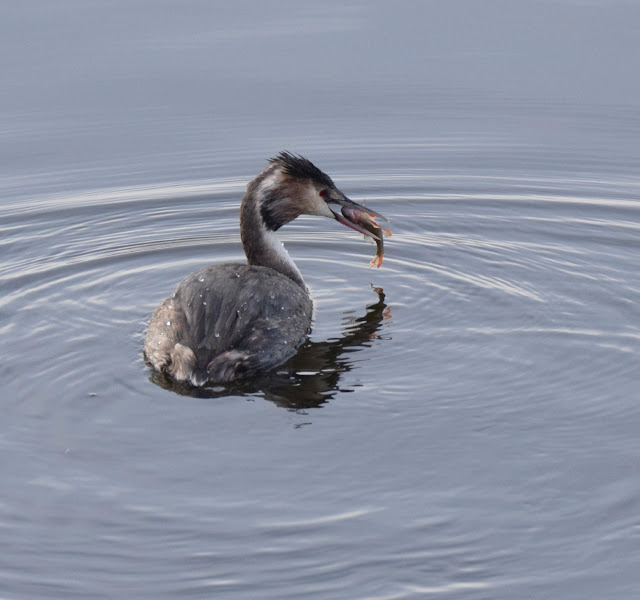 Meanwhile the paired-up pair were doing some interesting behaviour. 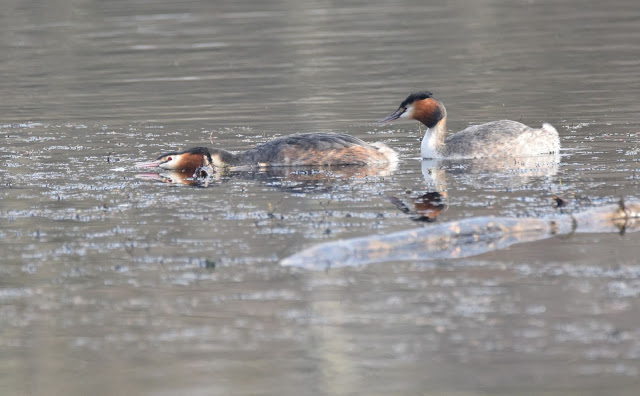 The Heronry is getting into swing too with 17 birds sat on or near the large nests. Sitting was the name of the game as there were wasn't much flying about going on on either day and we had a good wait to get this rather boring shot. 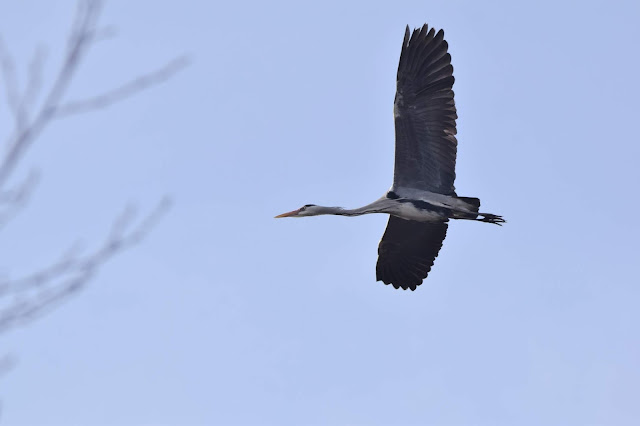 On the first day it looked as though one was sitting but the nest was empty the following day, unless it was sitting very low indeed. 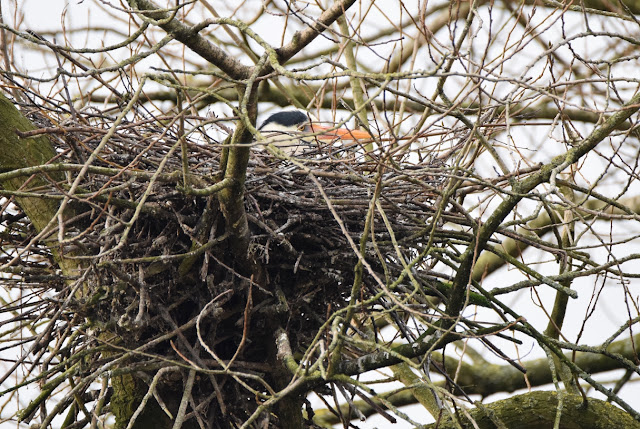 Can't beat a drake Mallard swimming quietly by in the sunshine. 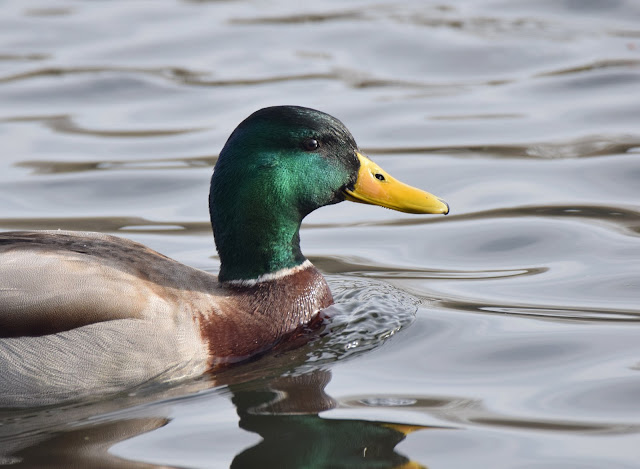 Nearby the dry chackles of a Mistle Thrush had us looking up to see four of them arguing about territories in the top of the trees. 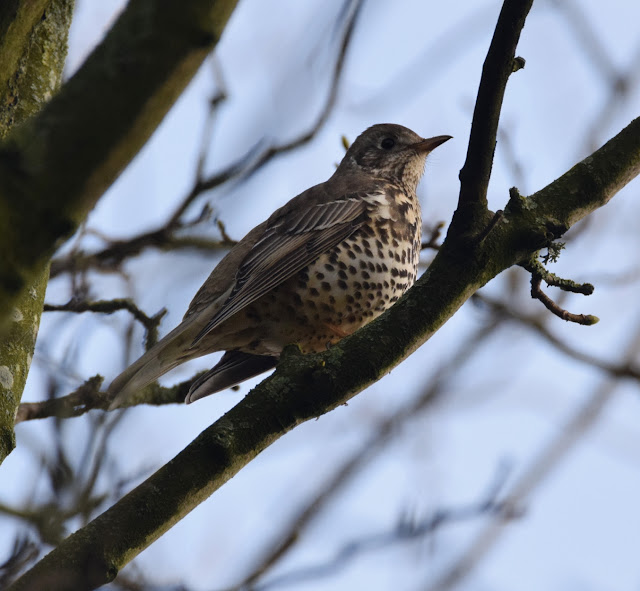 Then at the weekend we had a great surprise back at Base Camp. We were doing the washing up at the kitchen sink when a Grey Wagtail dropped in and landed on the edge of our pond, the first we've had since 2014 but it can't be counted for the challenge as it's on the wooden board at the edge, if only it had run to the far end where the bankside vegetation tumbles over the very realistic looking plastic rocks.
Where to next? We've got some safaris lined up based around the very high tides due to the 'supermoon'.
In the meantime let us know who's reacquainting themselves with your outback.