The Safari wants to know if anyone spotted the deliberate mistake in our last post? Treecreeper should have been number 87 not 86 again - somehow we missed we'd doubled up.
Since then we've been busy adding several more species to our Photo Year List Challenge. But we'll start with a couple of shots of our local Starling roost. The tide was just dropping when we arrived but the Starlings hadn't arrived yet, by the time the first few flew in the tide had dropped a fair way down the beach. 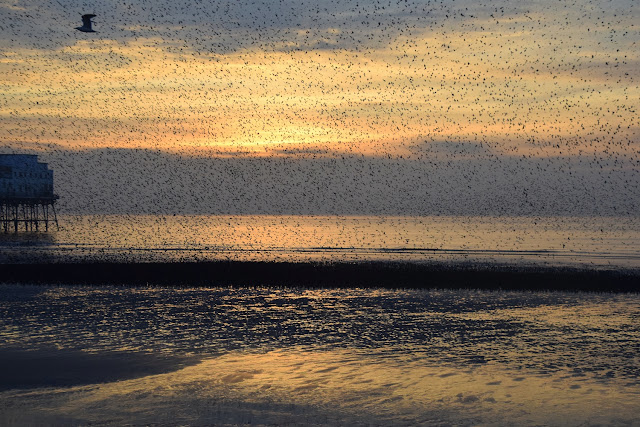 With the beach being exposed the birds chose to pre-roost on it. Being closer than normal we could just about see what they were doing down there - nothing much just standing around. Also being on the beach left them vulnerable to numpties getting too close mostly deliberately 'to make them fly'. 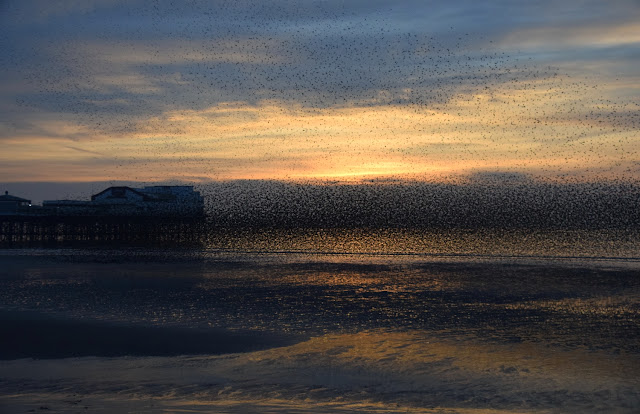 At least 50000 we totally guestimated, would love to know how many there actually are and if our guess is close or not.
News of a couple of Waxwings not too far up the road on the southern outskirts of Lancaster sent us twitching on a drizzly morning. We arrived on the street and saw two 'Starlings' sat in a low tree just past the row of shops, looking more closely as we drove slowly past gave us Waxwing (PYLC 88) as a top quality 'from the driving seat whilst moving' tick. We stopped a little further down the road and got our kit together and Monty out of the car but as we were doing that a bin wagon arrived and reversed into the driveway right under the tree flushing the birds. It took half an hour for them to be relocated, high in a tree on the opposite side of the small park there. 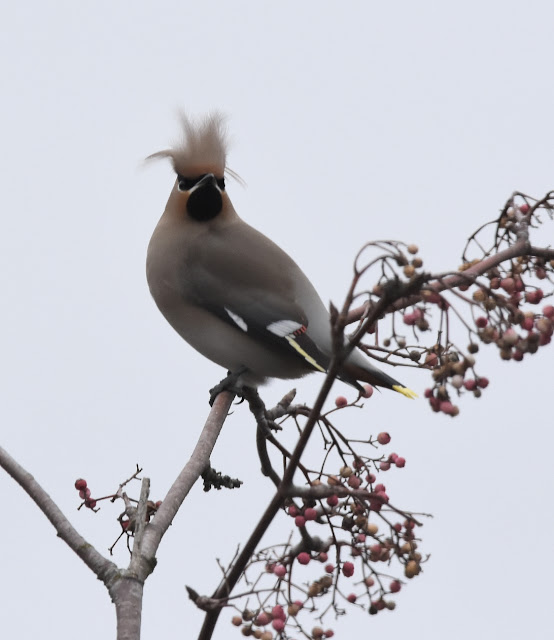 After a while they gained confidence and returned to their favourite berry tree. Shame the light was so grotty. 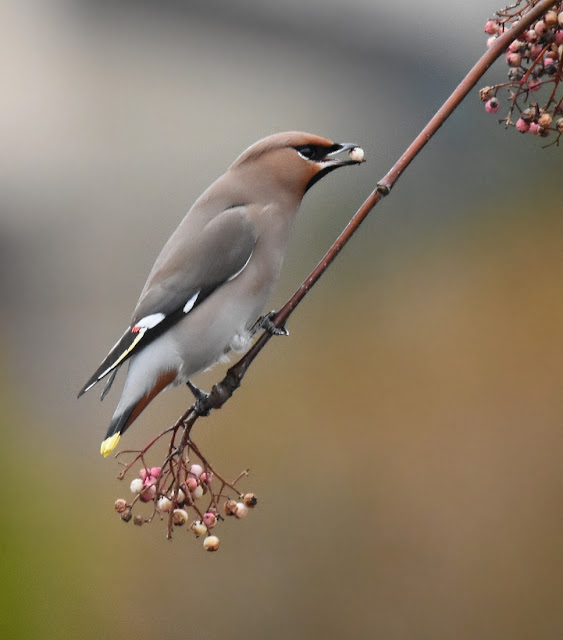 Job done we had a drive round the lanes back to Base Camp being thwarted by road closures at every twist and turn so we abandoned the lanes and went straight on to Knott End to have a look at the flock of Twite (PYLC 89). 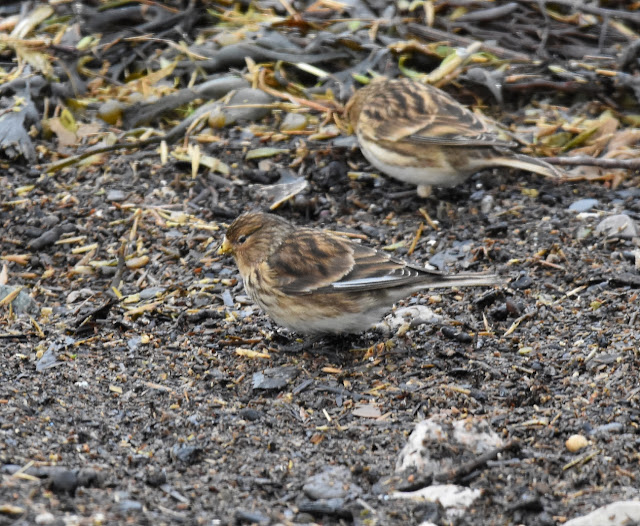 A trip down to the SouthSide with CR saw us checking out a rather quiet Lunt but it did give us our first Toad of the year. 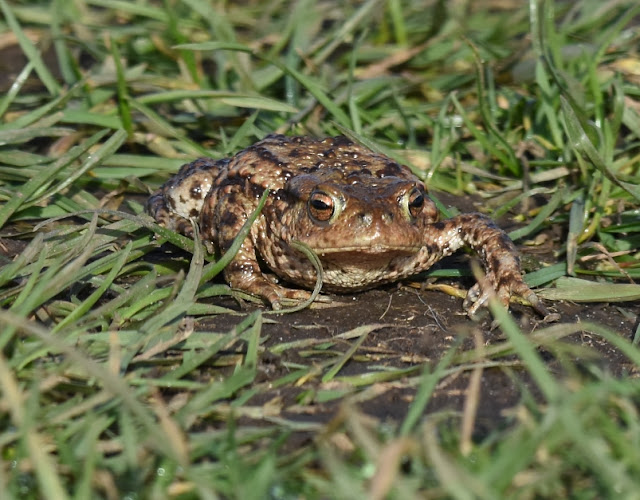 With nothing much happening we left earlier than anticipated and went down to the coast for an hour or so. It was mad busy being a sunny day and the tide was already too high for any waders to be on the beach. We headed through the dunes finding several Stonechats including a couple of singing males. 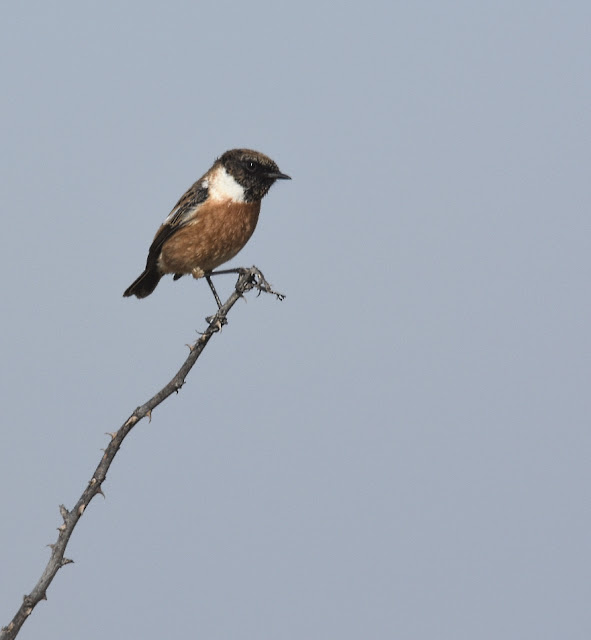 With possibilities exhausted we upped sticks to Mere Sands Wood where it was quiet again but we did find several 7-Spot Ladybirds, a Tree Bee and a Buff Tailed Bumble Bee in the warm afternoon sunshine. The good weather had brought the farmers out on the land but never have we seen so few gulls following tractors, it used to be like a plume of snow behind a plough not just a few dozen. 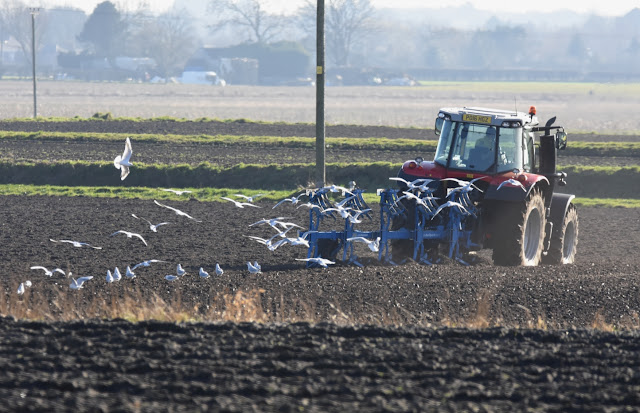 The good weather continued in the week and we had our first butterflies of the year with this Small Tortoiseshell and later another at Marton Mere, but no decent birds to point the camera at. 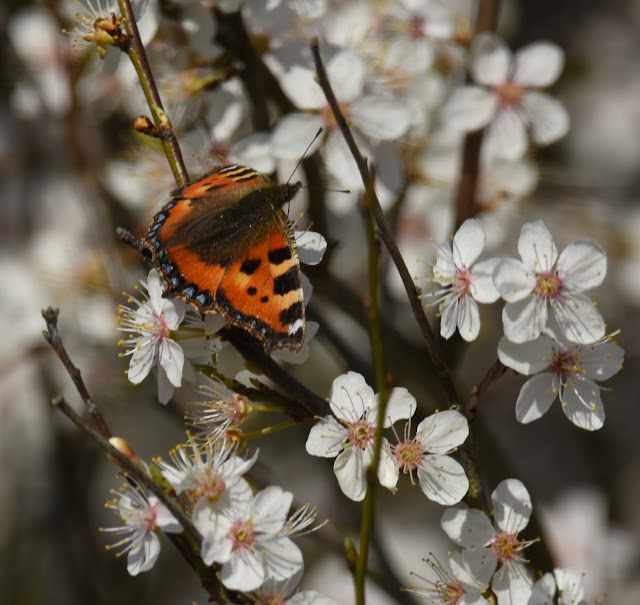 The 'supermoon' coincided with high tides in the middle of th day so a safari down to the marshes was order of the day. We had a mooch finding this distant but shy male Kestrel (PYLC 90) which flew off when we tried to creep a little closer. 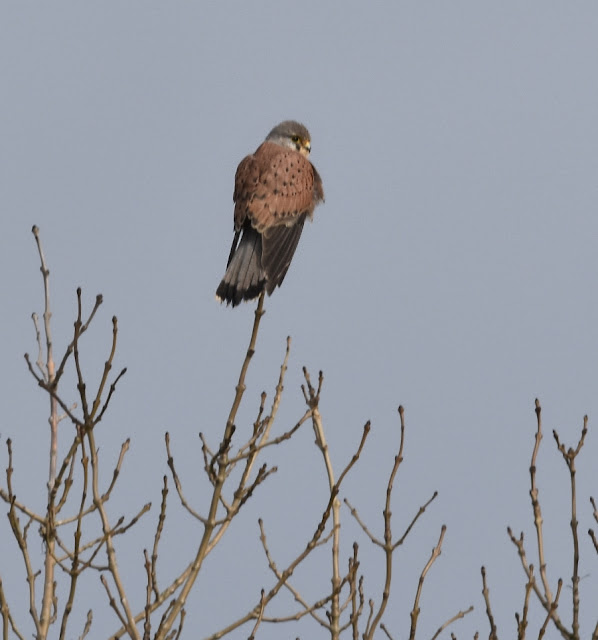 Retracing our steps back to the embankment we came a cross a pair of Wrens (PYLC 91) scolding a Dunnock that had strayed into their territory...They weren't happy! 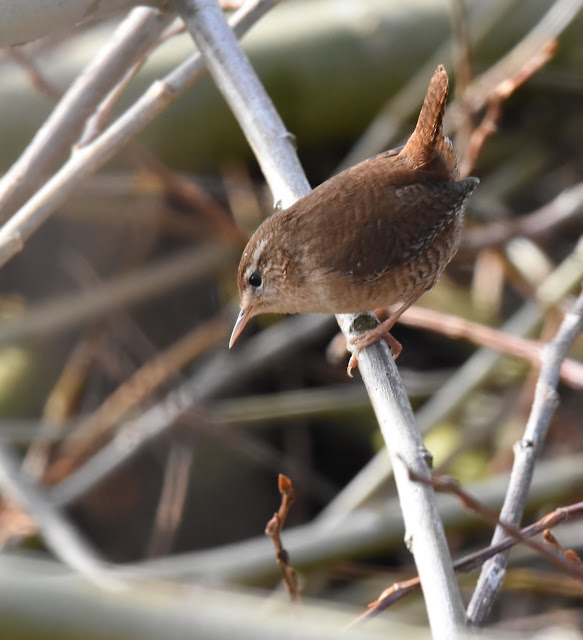 The tide came right up to the defences, something you don't see too often but we failed to see the Hen Harrier(s) again. The other target birds were the Water Pipits which we did see but only as awful silhouettes in the atrocious glare. Best of the rest was this Water Rail flushed out of the marsh by the rising water and having to take refuge in a bankside Hawthorn bush in the absence of any other cover. Not a good day to be a vole either asa they were getiing picked off by the Black Headed Gulls as they desperately swam as fast as their tiny legs could take them for dry ground. 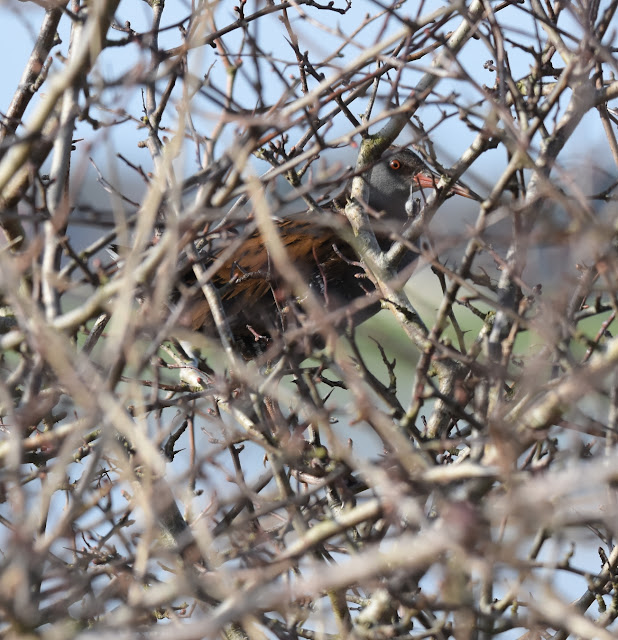 Another round Marton Mere this time on a gloomy day was unproductive until we left the reserve and walked round the bridlepath to give Monty an off-lead run and we came across a Goldcrest (PYLC 92). A tricky one to get to grips with as if flitted busily through the twigs and branches of a dense Willow bush. 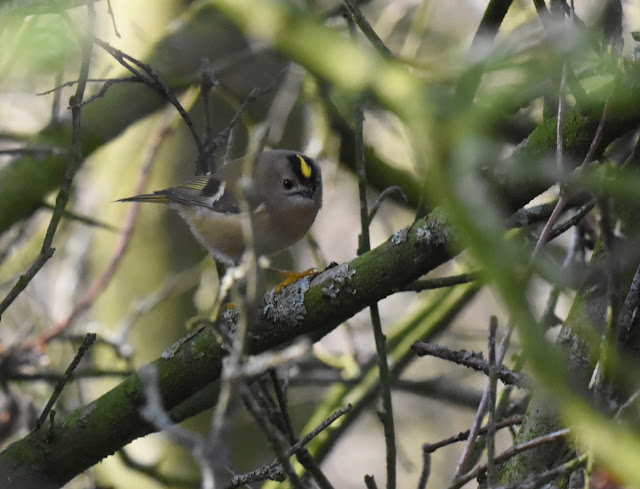 An impromtu family wander along the prom at Fleetwood had us getting to grips with a Meadow Pipit (PYLC 93) while Wifey spotted three male Stonechats in a little group close to the tower on the way back to the car.
Back at Base Camp in the week we'd watched a Buzzard soaring over CR's place and luckily a different, darker, bird came soaring high over Base Camp the following day. (PYLC 94)
Then it was all birding systems go when LCV came up for a few days non-stop birding. We met him at 'the place we don't mention by name' for a couple of hours getting lots of good birds, water fowl, waders and much better views or their Tawny Owls than last time we were here. 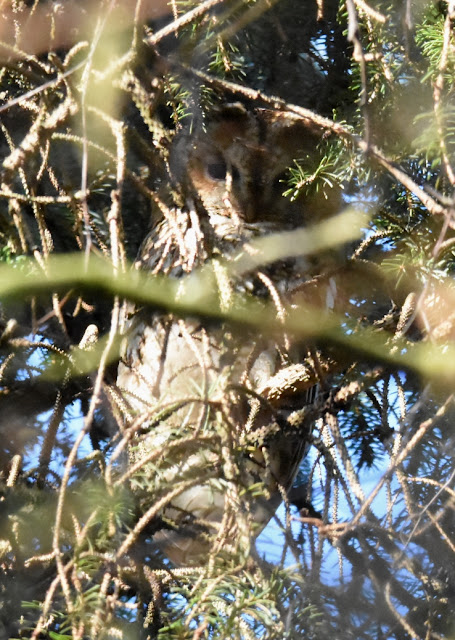 The sunshine brought out Brimstone and Red Admiral butterflies, always good to see the former as they are very scarce on our side of the river.
We counted 56 Avocets (PYLC 95) but learned that earlier in the day there'd been twice that many. Had to get a good pic of at range shooting into the harsh afternoon light. 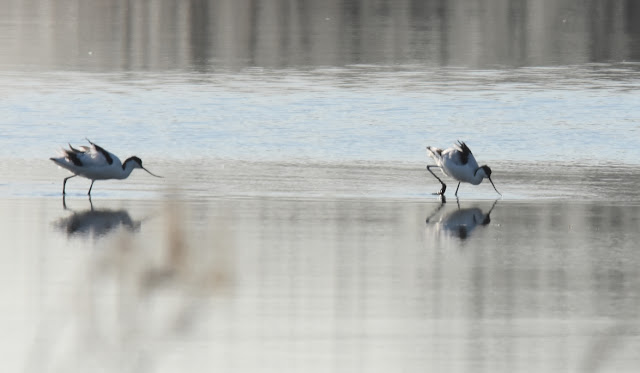 The following day we set of up the motorway in the opposite direction to Leighton Moss in blistering sunshine again. Lots going on there with plenty to keep us occupied but a search for the over-wintering Great Grey Shrike was fruitless yet again.
We'd heard a few pings of Bearded Tits on the way down to Lower Hide but our luck was in when LCV heard more pinging on the way back and a male showed well but briefly, actually there were two when we noted the colour combinations of the rings on their legs.
Lots of other good stuff around
For our next safari the weather had deteriorated horrendously and we had a wander locally round the lanes of Over Wyre. Bewick's Swans were on the hit list and fluky stop had a family of three being the closest birds to the car (PYLC 97). 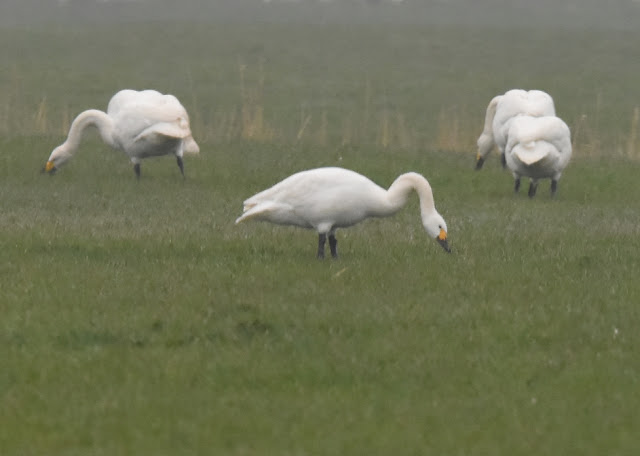 The rain came down heavier as we visited more sites racking up LCV's year list with species he rarely sees back home in the Midlands.  At Fleetwood again we came across the Linnets (PYLC 98) that were too disturbed last time out here with Wifey the other day. The light was truly dreadful by now. 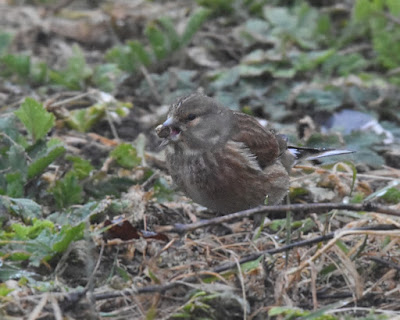 And was even worse when LCV picked up a flock of Ringed Plovers landing close by but a way down the beach. A year bird for both of us and number 99 for our challenge. Actually the 100th species we've photographed this year, Grey Wagtail on the edge of our pond being disqualified due to showing 'hand of man' for the challenge. 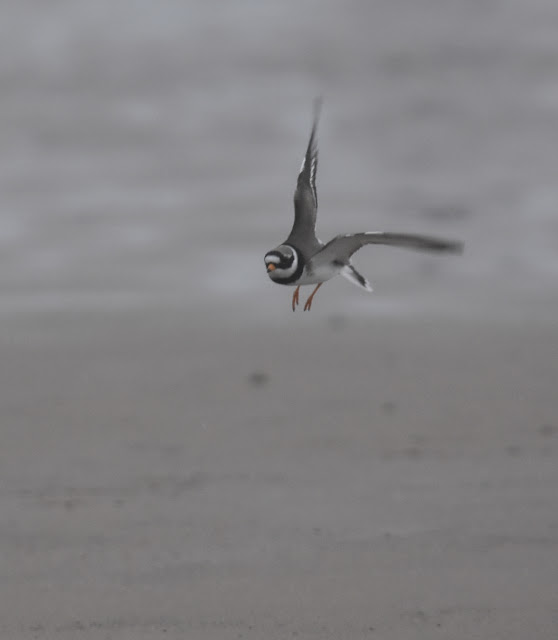 Our last day out was down to Moore nature reserve near Warrington to see if we could see their Lesser Spotted Woodpeckers. We'd not been there long when we heard one calling but could we see it??? We hung around the general area craning our necks at the slightest hint of a flit, we did get an incredibly brief glimpse of what was probably one after we'd seen a flit immediately after a bout of calling but not conclusive unfortunately.
We did get a Willow Tit (PYLC 100) 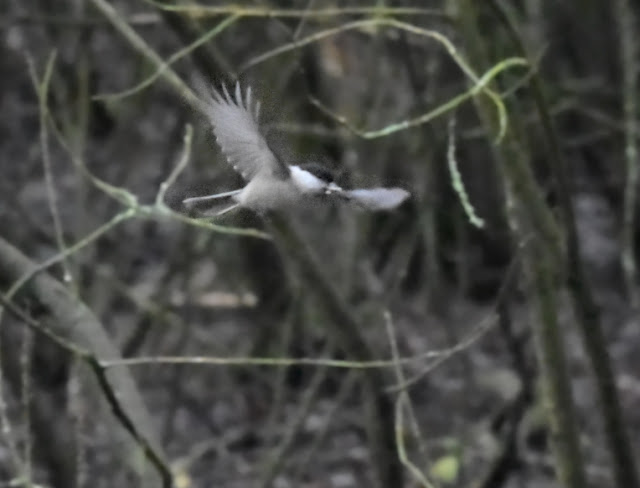 But is it? Latest info from the reserve's Facebook page suggests both Willow and Marsh Tits are now found on site and when visiting the feeders the Willows take their seeds high and the Marsh's go low...which this one did. They've learnt this from their calls, unfortunately this one didn't call and at the time we didn't realise both could now be seen here. So we're (probably) back to 99...or are we??? Which ever it is it was flippin tricky getting the shot in the dreadful conditions, as you can no doubt tell.
A great week with my boy.
Where to next? Oohh not sure where we'll be off to next week.
In the meantime let us know who's getting confused in your outback.
For more pics from our recent safari's have a look at our Flickr site - link on the right hand panel