The Safari didn't get out much last week due to the poor weather although we did spot we'd forgotten to add a species to our Photo Year List Challenge tally when we came across this pic from our recent safari up to Leighton Moss which has a Knot (101) roosting among the massed ranks of Redshanks. 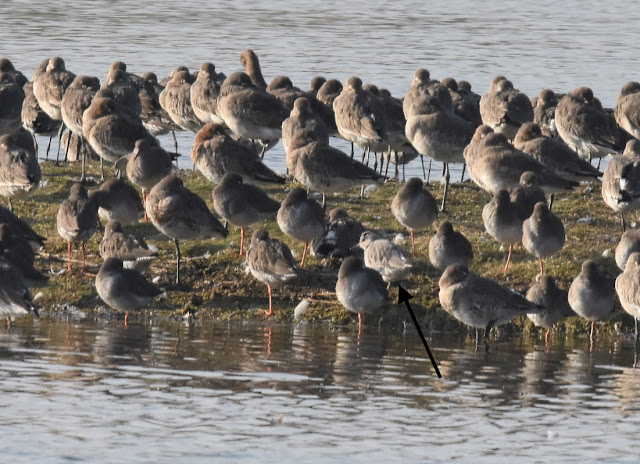 Our best find for a some time came during a visit to our local Marton Mere nature reserve. It was a fairly quite late winter visit with the best being a Chiffchaff calling by the Fylde Bird Club hide, a quiet day but at least we got ourselves a year tick, couldn't see it in the dense Blackthorn scrub to get a pic though. We crossed the bridge and continued along the embankment with the intention of going through the main part of the reserve for a change but as we approached the turning point there was a succession of off-the-lead dogs heading our way - - nightmare so to avoid them we bunked off the embankment at the earliest opportunity and took the path down through the rough field. good choice as through the bins we could make out a bit of a lump low down in the bushes by the barn that didn't look right. not a lump but a Little Owl!!! We heard it calling a couple of weeks or so ago but this is the first sighting we've had of it here since 6th December 2015; we didn't get one on our year list at all last year or in 2016. It was really too far across the field for a pic and a strong gusty wind was blowing us around a bit but it is identifiable - if you squint hard - so is added to our PYLC at number 102.

Back at Base Camp we finally got a Garden Tick in the form of the local Peregrine - to qualify birds flying over must be within the airspace directly above the garden, not just visible from the garden. Better yet it was tussling with a pair of Ravens - never expected to get that species as a garden tick! It was the cronking of the Ravens that made Monty bark which stopped us doing whatever it was we were doing at the time and go and look outside - we immediately dashed back inside for the camera but missed the action as the Ravens broke off from the Peregrine's assaults and headed off southwards low over the roof tops - still it was a totally epic sight from our small suburban garden.
We saw one of the Ravens (we're assuming it was one of the two although we always say you should never assume anything!) the following morning at the start of Monty's early morning walk.
For his second walk, his big walk, that morning we again went to Marton Mere but with a deteriorating forecast already gloomy skies and rain imminent we didn't take the camera. Big mistake, the light wasn't that bad, cloudy yes but quite bright and the imminently threatened rain didn't appear for a couple of hours and we were nearly back at the car. If we had have taken the camera we'd have got a super pic of a Little Grebe really close at the Dragonfly Den hide. We had hoped to get good pics of this species at Moore last week but although there were several there on all the ponds and pools none were close enough to warrant pointing the lens at.
Salt was rubbed in our wounds when we went to the shops in the afternoon to park up in the car park next to a car that had a Rook sat on it. The bird was un-phased by us winding down the window and just looked at us as we hastily footled round in our pockets for our phone - yes it was that close! The PYLC rules state 'no hand of man' in your pics but this Rook was so close a good portrait of its face could have been had without any of the car it was sat on in the frame...unfortunately we'd left our phone on the table by the front door back at Base Camp...dohhhhh. But never mind we'll have to go back and do 'some more shopping', taking a proper camera and maybe a bit of bread for bait with us.
We did take the camera out with Wifey and Monty and met up with GB for a bit of a breezy mooch along Fleetwood prom and back around the marine lake.
The Purple Sandpiper was roosting on the end of the island but just as we raised the camera to get a pic a small group of Turnstones flew round from the other end of the island landed next to it and flew off again taking it with them, we tried in vain to get a flight shot....missed by miles! Other 'excitement' came in the form of the now long dead drake Red Breasted Merganser and Monty slid in on the slippery algae covered slopes trying to retrieve an empty plastic bottle he'd picked up and was playing with - he was not amused! Fortunately he persevered and did manage to grab it at the far end of the lake, without falling in this time and we were able to put it in a bin when he'd finished chasing it around in the wind.
The only bird we could find to point the camera at was this Black Headed Gull sitting for a while in the choppy water before lifting off and drifting past us. 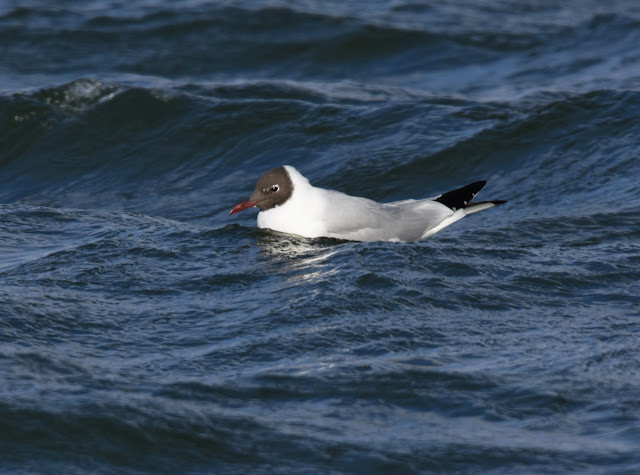 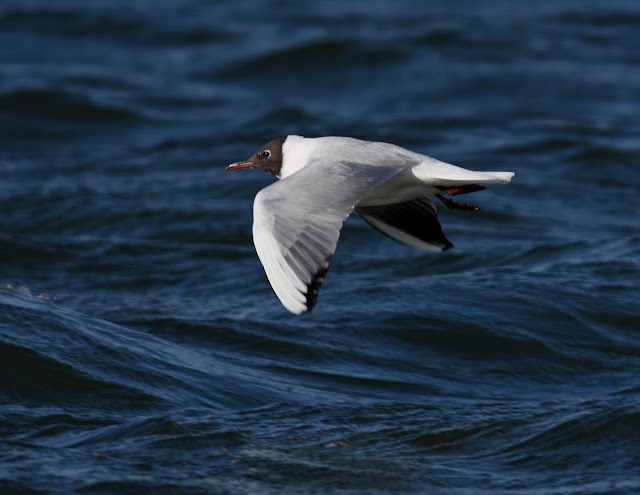 During the brief spell of southerly winds a small number of very early Wheatears and Sand Martins were reported from a variety of local and local-ish sites but we failed to bump in to any of them. That's the trouble with March it gets you all over-excited too soon and then it snows. We'll just have to be patient and take any opportunities when we get them - helps if we take the camera with us. It'll happen when it happens and that's usually not for another month at least yet so we'll have to make do with slim pickings for a while longer.
Where to next? It looks like it's going to be a rough week weather-wise but we're sure we'll hit Marton Mere at least once or twice and maybe a further flung safari next weekend.
In the meantime let us know who was a hit n miss in your outback.