The Safari has had a few good days out in the field during the second half of March.
A couple of Saturdays ago we met up with our Southside chums for a wander round Moore nature reserve near Warrington. We heard a brief Green Woodpecker call and watched Great Spotted Woodeckers chasing each other round the trees calling loudly but of the main event, the Lesser Spotted Woodpeckers, there was neither sight nor soundl despite plenty of folk listening and lurking around the Canal Path where a recently newly excavated  nest hole has been started by one of the males.
e spent some time watching the feeders where a Bank Vole was star of the show. The supporting cast included Long Tailed Tits, a Great Spotted Woodpecker, Reed Buntings, Chaffinches, a Nuthatch, and several Great and Blue Tits but there was no sign of the sometimes regular Willow Tits or the newly arrived at the site Marsh Tit.
We enjoyed seeing the early spring flowers, lots of Primroses and the first Red Campions of the season but wit ha lunchtime high tide an executive decision was made to translocate to Parkgate Marsh half an hour away to see what raptors, waders and waterfowl might be about.
We pulled up in the very full car park, got out and asked the nearest birder if there was owt about - he pointed to a male Hen Harrier which promptly went behind some bushes never to be seen again for the rest of the afternoon. As luck would have it our chums had stopped at a garage for supplies on the way and were a little later arriving than us and got stonking views of the harrier as they drove along the promenade.
Butties, pies and the now obligatory Asda cheesy puffs were scoffed while watching thousands of Pink Footed Geese getting moved up the marsh by the advancing tide and several Little Egrets with a couple of Great White Egrets thrown in for good measure and not forgetting the quartering Marsh Harrier.
AB waltzed off across the car park to investigate shouts of Short Eared Owl and beckoned us over to see one at close range a few minutes later.
The tide was supposed to be as high as the previous day but with higher pressure and less wind it became obvious it wasn't ging to totally flood the marsh today giving at least some of the small mammals a chance to live another day, there were so many photos of Short tailed field Voles being taken by every imaginable predator posted the previous evening that it's a wonder there were any left for this afternoon's predators. but there were and this Short Eared Owl (PYLC 110) had locked on to one unfortunate individual. 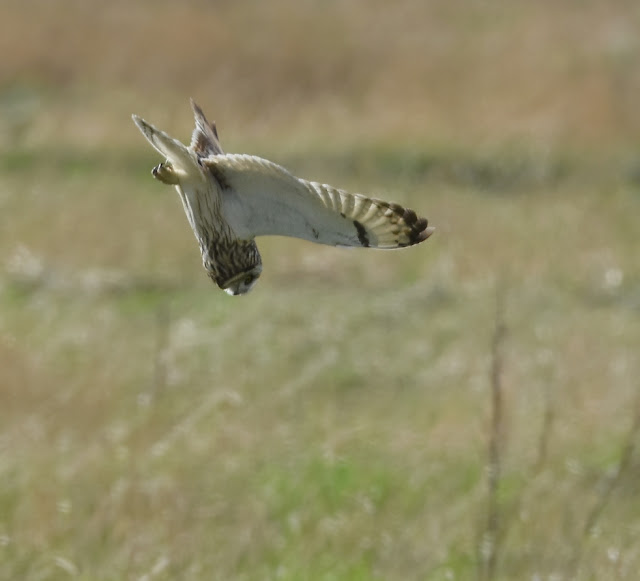 We enjoyed pretty good views after it had eaten its vole and resumed hunting. 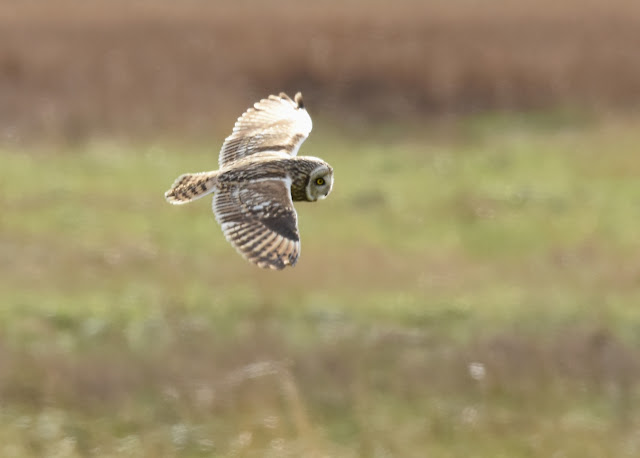 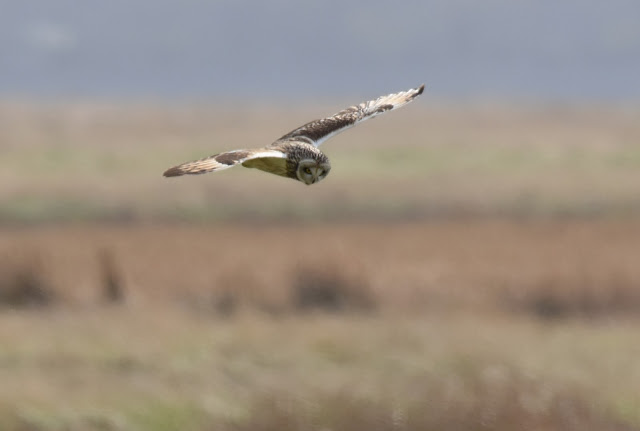 After a brief interlude in the dog-friendly garden of the Boathouse pub chatting and drinking tea watching a/the Marsh Harrier waft past and a Raven land on the marsh close by it was time to head home but at the car park a last few minutes up the path with Monty gave us spectacular views of a hunting Short Eared Owl, giving us a last five minutes opportunity to fill our boots. 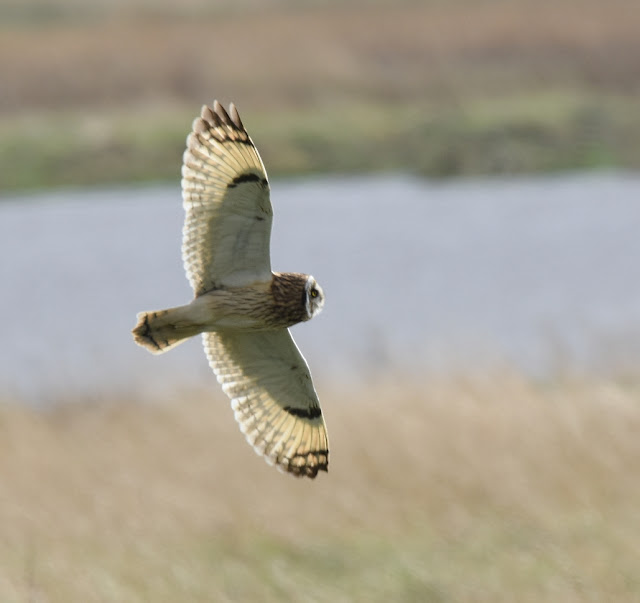 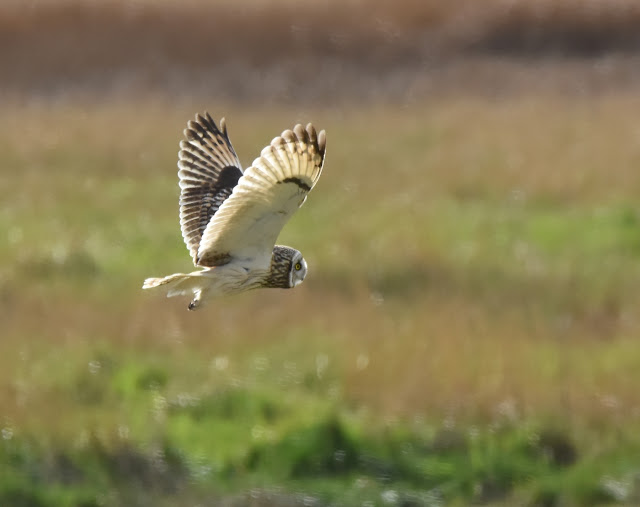 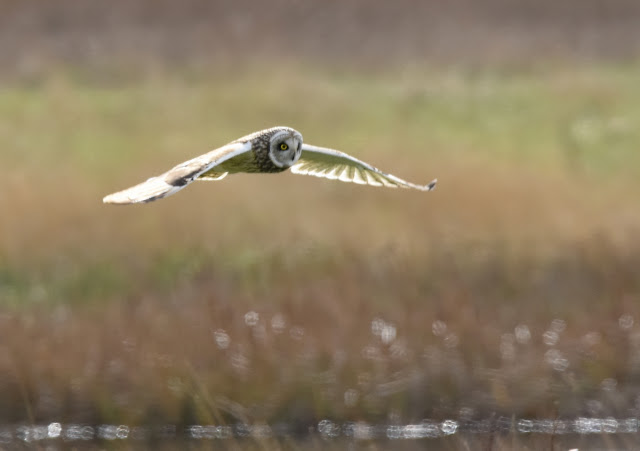 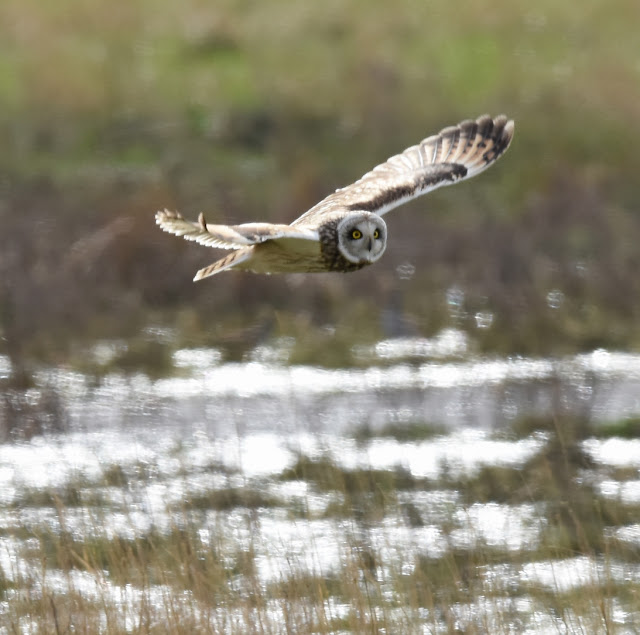 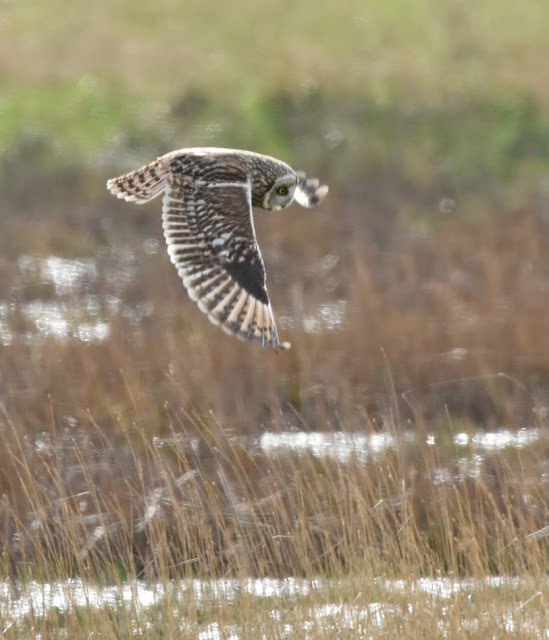 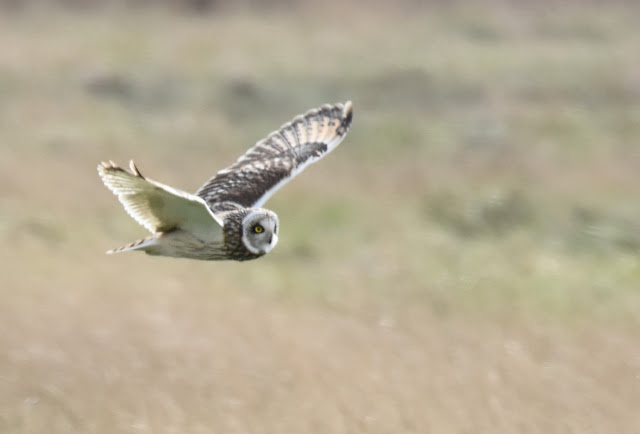 Better was to come but sadly we were in the car. Driving out of the car park there were now two Short Eared Owls hunting the marsh wihin a few feet of the roadway between the pub where we'd just had a brew and the patch of grass we'd met the rest of the gang on earlier - and the sun was coming out. But unfortunately we had begun to run late and there was nowhere to squeeze the car in between the serried ranks of already parked cars...how annoying!
In the week a morning dog-walk took us Marton Mere where there had been an influx of Chiffchaffs (PYLC 111) overnight 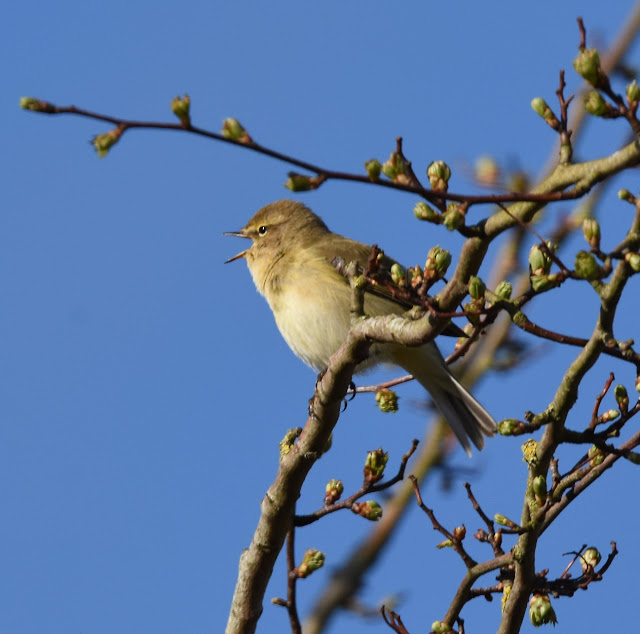 And on the way back after a fairly quiet round, other than the numerous Chiffchaffs, we came across a female Great Crested Newt at a location we've not looked for them at for a number of years so it was really good to see they are still in the area. Then we fluked a female Bullfinch. We half dismissed a finch flying across our path and into some nearby bushes as a Chaffinch as it had a big flash of white on it as it went by. Something in our brain mustn't have quite computed as after a milli-second of dithering we looked at where it had gone to see a Bullfinch sitting at the back of the bush. Really tricky to get a pick of throughthe twiggery but we got a half decent record shot in the end...well chuffed - they are still very scarce round these parts and only seldom seen!!! 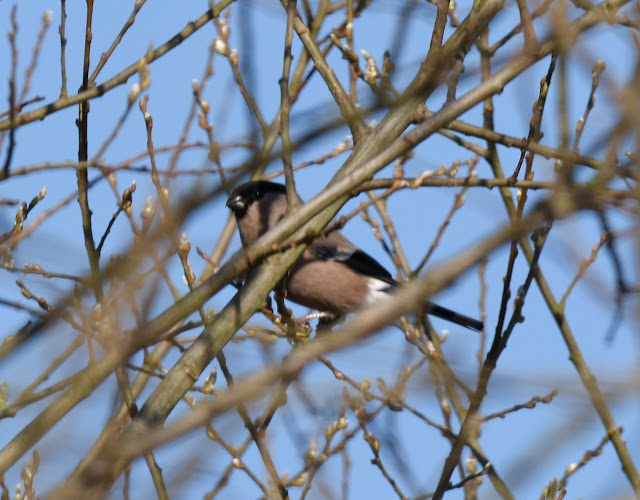 At the end of the week we had a safari up to the southern fringe of Lakeland with CR. What a day that was. It was cooler than expected but the Lesser Redpolls (PYLC 112) and Siskins (PYLC 113) made up for the lack of snakes.
After a look around the feeders and at the snake 'hotspots' which were decidedly cold today we had a walk along the boardwalk hoping to connect with some Red Deer, we'd already seen a Roe Deer in a field just after the nearest village, or even a newly arrived Osprey sitting on the nest platform. But all was quiet. Good to see the water levels on the raised bog were very high and there's been some interesting habitat work around some of the streams and ditches since our last visit at the end of the summer.
Once back at the covered verandah at the visitor centre for our lunch another visitor told CR where some Grass Snakes could be found only a few yards away. Never has a ham and tomato butty been so quickly dispatched. Sure enough at the base of the nearby wall hiding in the leaf litter was a tangle of Grass Snakes. Always a pleasure to watch and so disappointing that they are now so rare closer to Base Camp, with all the ponds and wetland areas across the Fylde they must have been extremely common once upon a time but sadly not anymore. Also sadly they decided to slide into the confines of the wall when the weather chilled a little more.
From time to time one would poke its head out of the wall to see if it had warmed up any or if the coast was clear perhaps. It was quite comical. 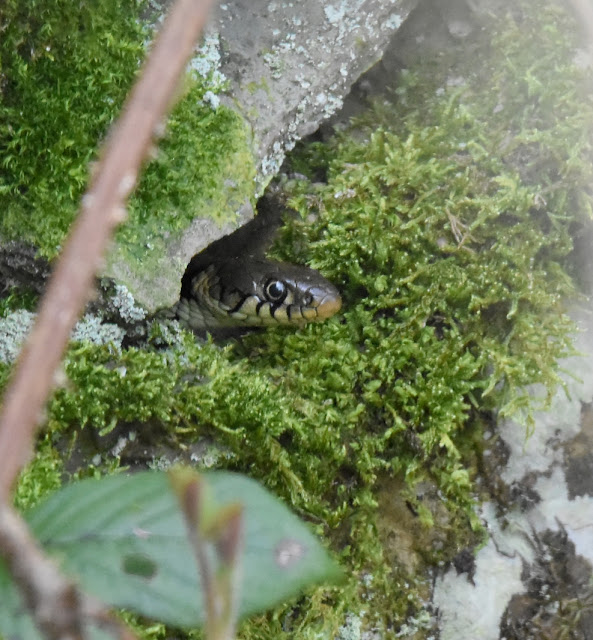 After enjoying the Grass Snakes we had another look  for the still invisible Adders but to do that meant passing the lively feeders again. 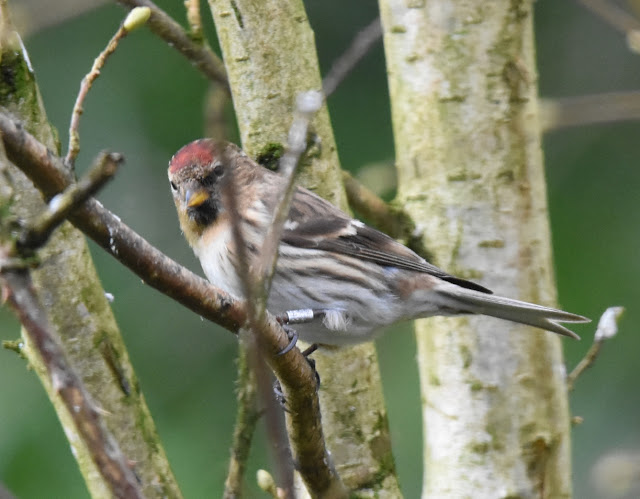 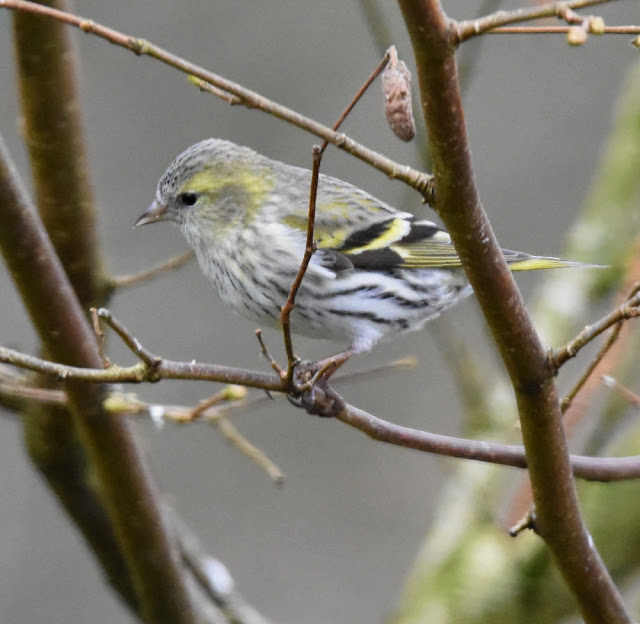 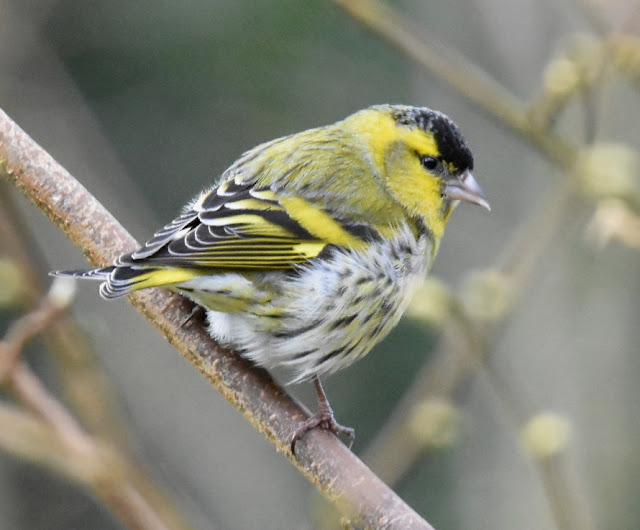 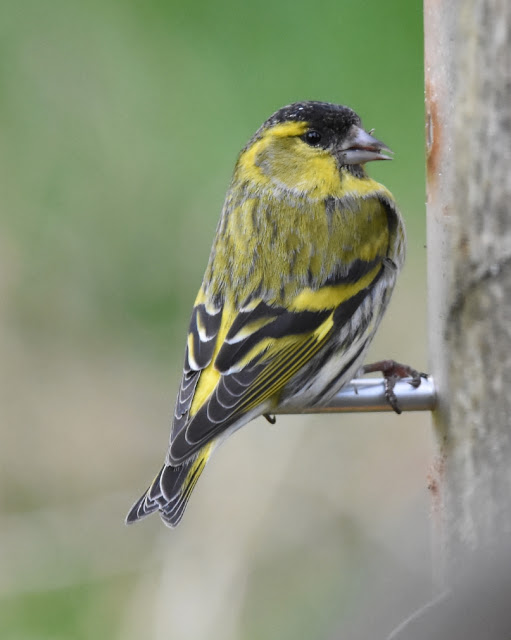 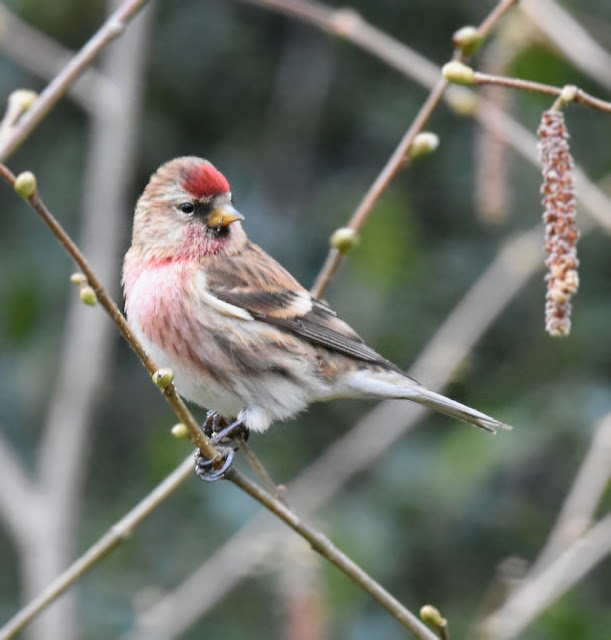 From there we had a walk through the coppice to the higher hides overlooking the Osprey nest and the fields. The woods were quite apart from a few singing Chiffchaffs and in neither the woods nor the fields did we come across any deer. The wild Daffodils though were as spectacular as Wordsworth would have seen them, there were drifts scattered across the woodland floor and in to the field margins where they probably show there had been woodland until fairly recently. It's a great shame we didn't take any pics as they'll be gone by the next time we visit so we'll have to wait a whole year for another chance to see them.
With the woods quiet, they'll be alive with migrant birds of all manner of species in a couple of weeks and no doubt we'll be back to fill our boots with the sights and mainly the sounds of the woodland in all its glory, we headed back to the Grass Snakes which had come out again but were hard to get a sight-line to through the intervening vegetation. 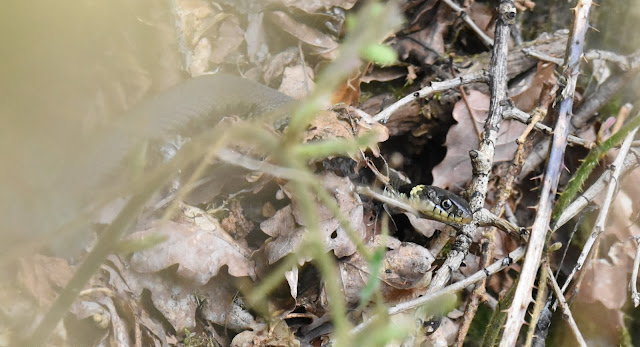 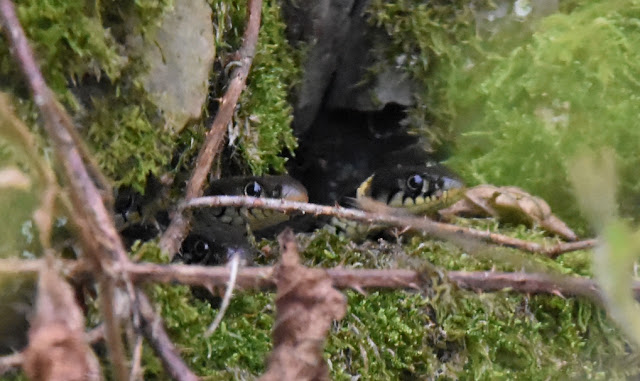 And of course those feeders were close by for a last look before home time. 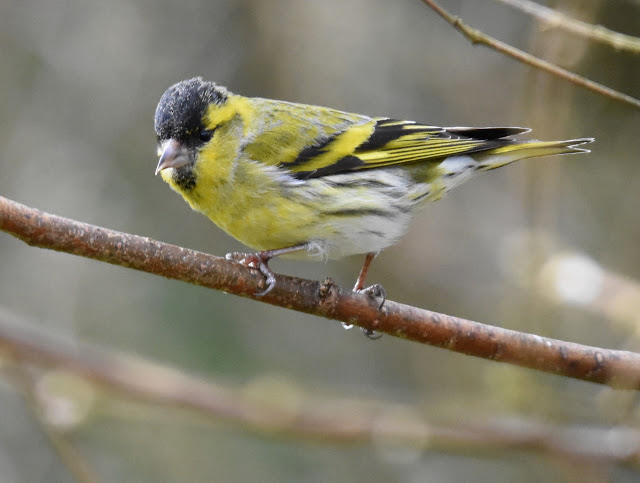 Our thanks go to CR for driving on this superb day up north.

Back at Base Camp decent weather over the weekend had us sky watching for migrating birds of prey. We had some success with a passing Buzzard 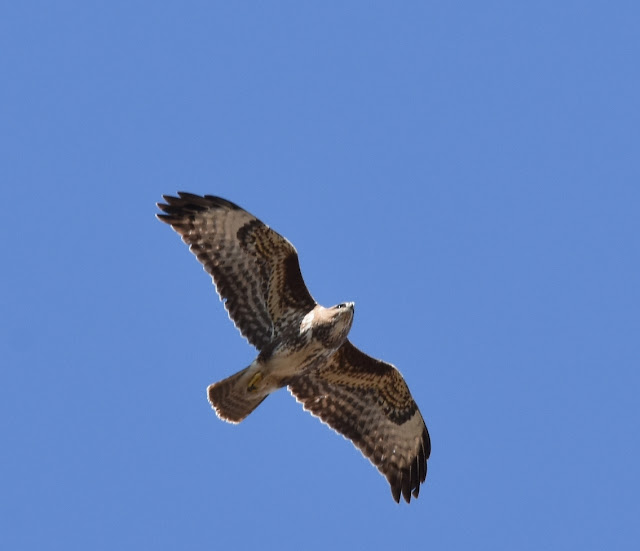 but couldn't grab the camera quickly enough to get a pic of the Raven that flew right over the garden - that was totally unheard of and unthinkable when we moved here 15 years ago, they were so rare round these parts back then...unlike the Grass Snakes they are a local conservation success story - or maybe that should not be conservation but a lack (or at least much lower rate of illegal and unnecessary) persecution by game-keepers.

Perhaps even more welcome than the Raven was our first Robin of the year in the garden, we've heard them not far away but to wait until the end of March to record one in the garden is unprecedented, normally if one hadn't found its way in to the note-book by 3rd January we'd think that was getting very late. We also had a brief visit from a Chiffchaff but despite several passing Buzzards no Ospreys passed overhead as we hoped one (or more!) might - or if one did the gulls didn't alert us to it as they did the Buzzards.
Warmish and, more importantly, dry weahrer mid week allowed us to get the moth trap out for the first time this year and we had immediate success with a single Common Quaker on the first night followed by up to six Hebrew Characters on subsequent nights, a good start considering all the habitat destruction locally over the winter - oh sorry we meant 'tidying up'.
We had planned another reptilian safari with CR for this morning but the weather decreed none would be seen so we went to Marton Mere instead and a fortuitous change of venue it proved to be. Straight away we had about two dozen Sand Martins and our first Swallows and House Martin of the year (our earliest for at least 10 years and by a good margin too). A Buzzard was seen out of its roost by a couple of Herring Gulls as we passed the Feeding Station on route to Dragonfly Den hide. It was noticeable how many Cetti's Warblers and Chiffchaffs there were around the place too.
At Dragonfly Den (aka Ice Station Zebra - and certainly living up to its alias this morning!!!) we tried to get some pics of the Sand Martins and Swallows for the Challenge but they were always too distant really, we got some but they'll have to be replaced over the course of the summer.
And with goodies like two calling Little Grebes 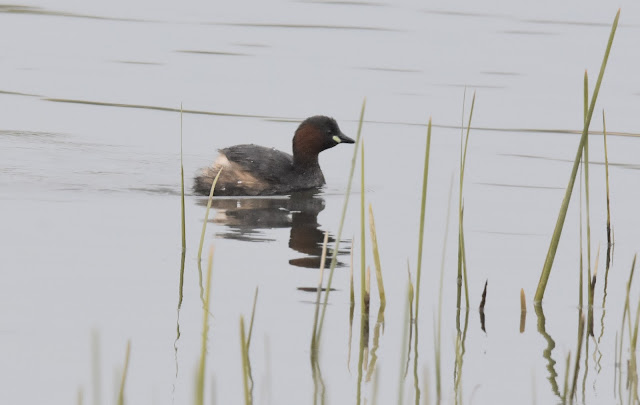 our first Shelducks of the year for the site 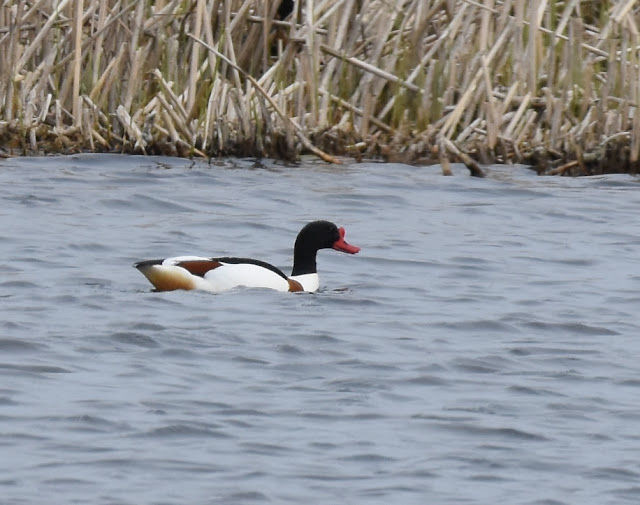 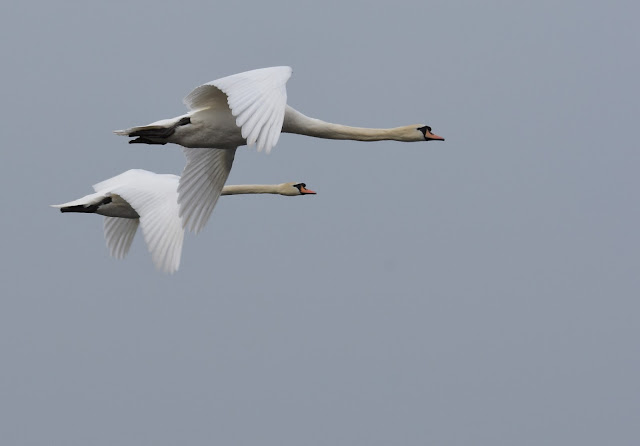 Our first Grey Wagtail for the year at the site - Spotters Badge well and truly earned by C today. 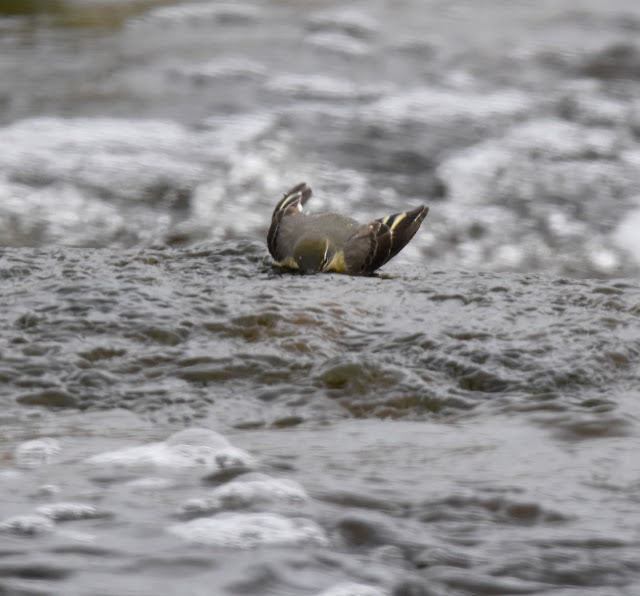 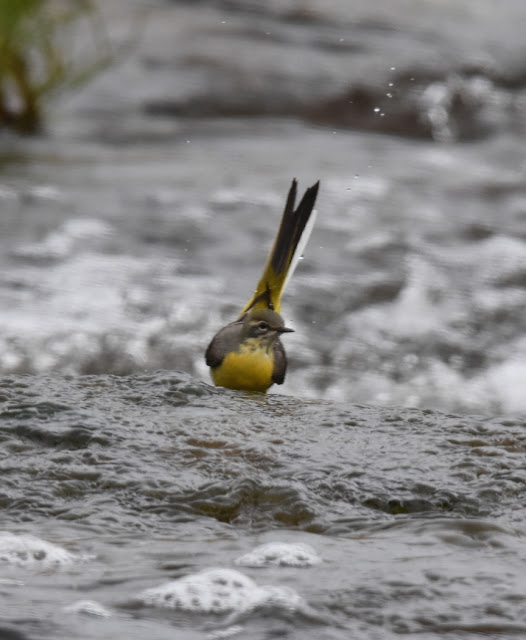 We heard numerous Cetti's Warblers but they were teasing us with only fleeting flight glimpses as they passed over gaps in the reedbed or the briefest of almost at the edge of the reeds or in a dense bush views. Towards the end of our walk a Wren did what we'd hoped just one of the Cetti's Warblers had done. 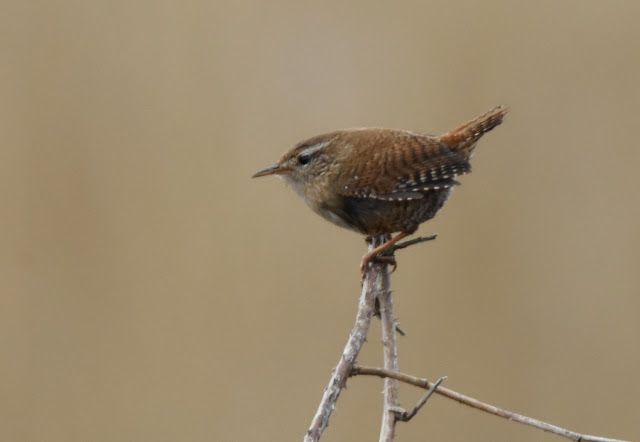 A superb morning out on safari - if a little chilly! Brrr it felt more like February than April.

Where to next? We've got some pond dipping coming up and an amphibian survey with a further flung safari again later in the week. Hold on to your Hollyhocks Spring is sprunging and the natural world is coming alive.
In the meantime let us know who's slithering through the grass in your outback.