The Safari apologises for the lack of recent updates, inexcusable we know but we have been away for a week in a rather windy southern Scotland. But before we get over the border we've been on a few other safaris loser to home doing our best to add to our Photo Year List Challenge. At the time of writing we're currently in third place with no hope of catching the front runner (from British Columbia) unless something awful befalls her, there are a others who are hot on our heels too.
A cold, drizzly and windy Fleetwood golf course early in the month gave us this poor Skylark pic for 116 - yet another to try to improve on as soon as possible. 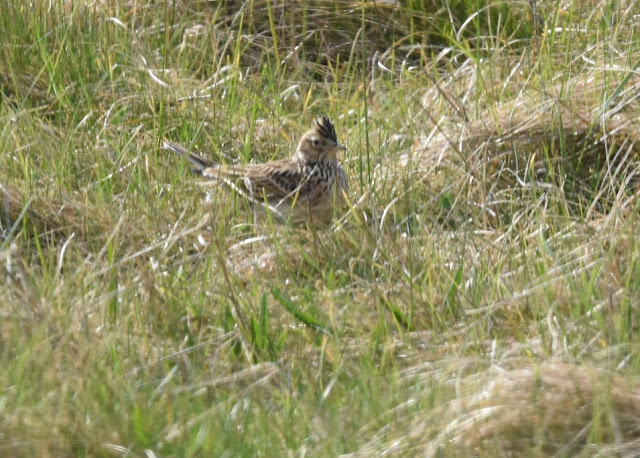 CR took us up to the private reserve in southern Lakeland but the weather transpired against us with no reptiles and few birds seen so by lunchtime we decided to call it a day and head south to Leighton Moss RSPB reserve where we spent much of the afternoon enjoying the Black Headed Gull and Avocet colony. However our fave pic of the afternoon as of this bathing Oystercatcher. 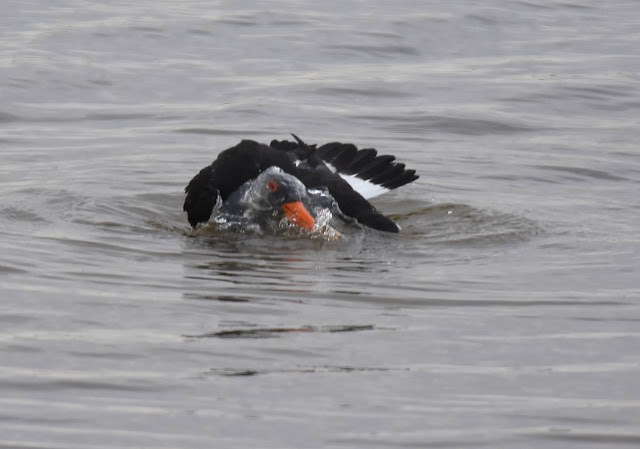 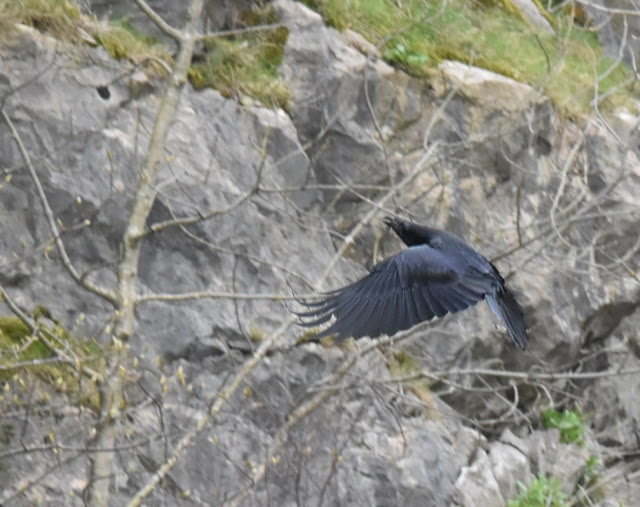 An improvement in the weather brought some migrant birds with Wheatears being seen along Chat Alley but only when we werre camera-less. A wander round Marton Mere gave us our first Willow Warbler  (PYLC 118) of the year. Always a joy to hear their liquid cadence filling the morning  air. 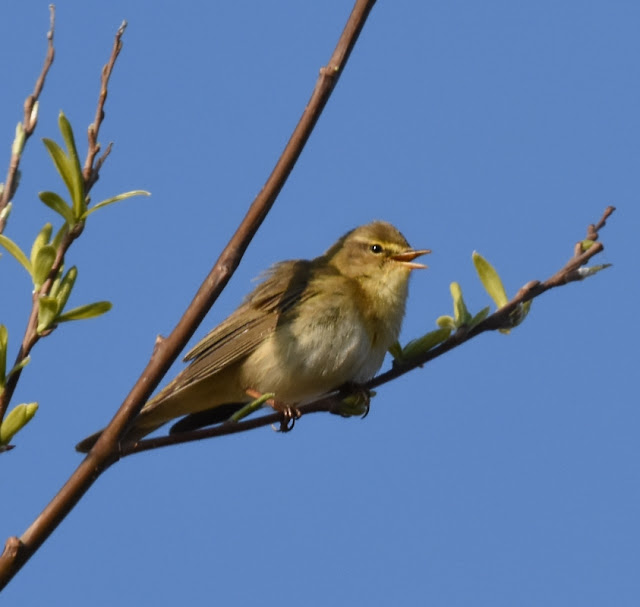 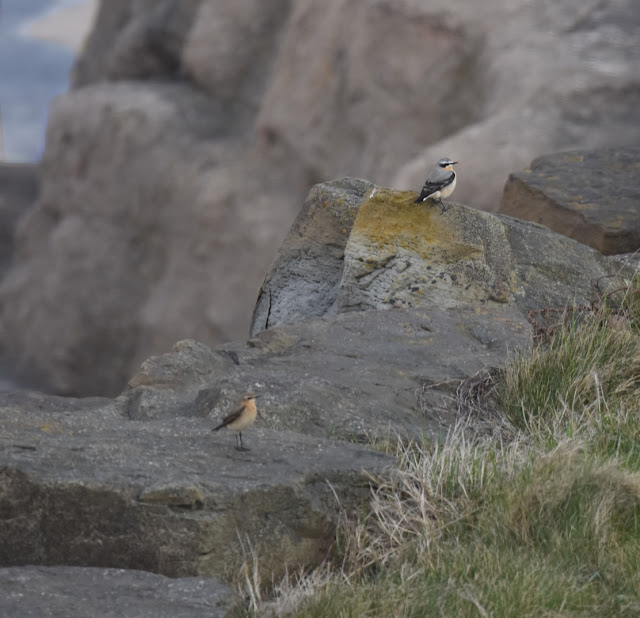 The cliffs aren't 100% natural but we have been allowed it as the 'hand of man' can't really be discerned in the pic - phew!
We've had several visits to Marton Mere, mostly with the aim of coming across one of the many Cetti's Warblers but the skulky little devils continued to avoid us as they had done all year so far - hearing them isn't problem; seeing them out in the open for more than a split second is a different proposition entirely. We were rewarded one morning with a handsome drake Garganey (PYLC 120) that was unfortunately a little too far away to do it full justice 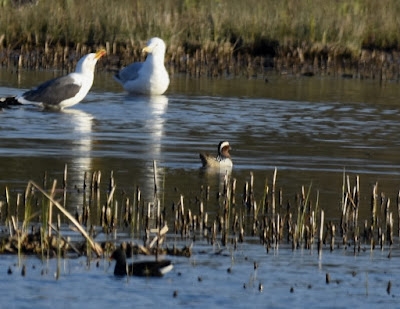 And then to Dumfries and Galloway we went for a week with Wifey, LCV and family. For the first half of the week there was a very cold wind blowing in all the way from the far side of Moscow that was keeping many migrants at bay. The second half of the week warmed to almost tropical temperatures so it was beach and ice-creams wit hthe family. not until we'd visited the Red Kite feeding station at Bellymack Hill Farm - a must visit if you're in the area, open every afternoon of the year. Like everyone else there we filled our boots with pics but chose this slightly blurred one for our challenge pic (121), they stoop very very fast when the food appears!

There's a whole heap more Red Kite pics on our Flickr site.
Morning visits to the nearby RSPB Mersehead reserve gave us lots of Barnacle Geese but few migrants other than chiffchaff, a couple of Willow Warblers and a few Blackcaps, one of which was photographed very poorly for number 122. 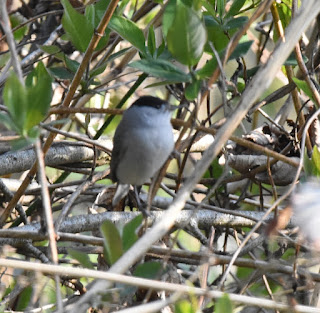 The star of the show there are the Barnacle Geese and we spent a lot of the time just  enjoying them and trying to read some of the Darvik rings some of them sported. 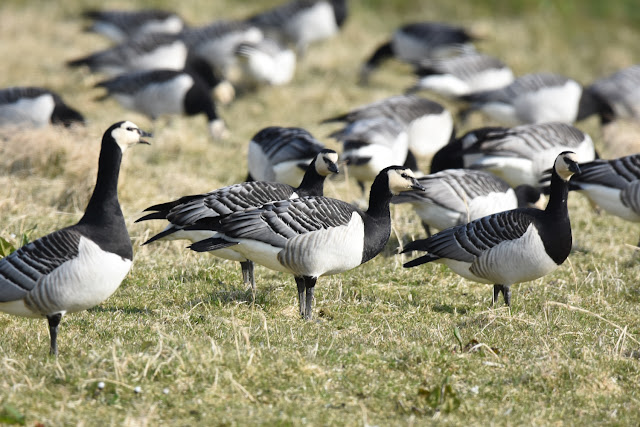 Best animal of the whole trip for us though were the Badgers at the last public watch of the year at Mersehead. We hate to admit it but we've not seen a live Badger since the early 1980s so for a few quid, a comfy chair and an almost dead cert chance of seeing them we just had to pay the entrance fee. A bit of a wait that included a couple of unidentified bats and an unidentified 'dark' owl - not the fairly regularly seen Barn Owl was crowned by not one, not two but three Badgers feeding on the peanut butter bait down to six feet from our boots the other side of the window - we just loved it and big thanks to Calum the warden for allowing the group to stay an extra half hour. hopefully our Badger drought has been ended and it won't be 35 years or so until our next sighting of a live one - crikey we'll only be a few years short of the ton by then!!! 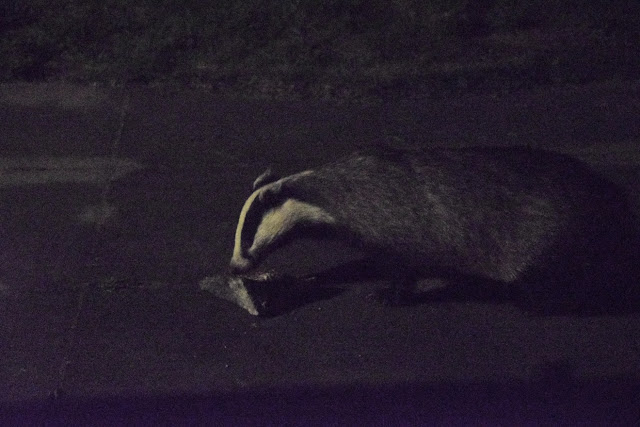 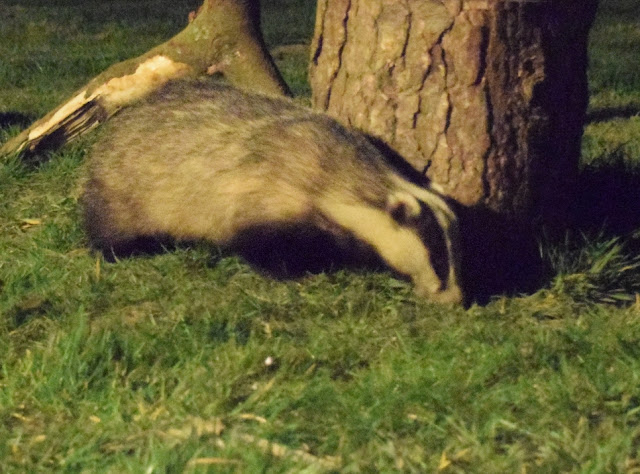 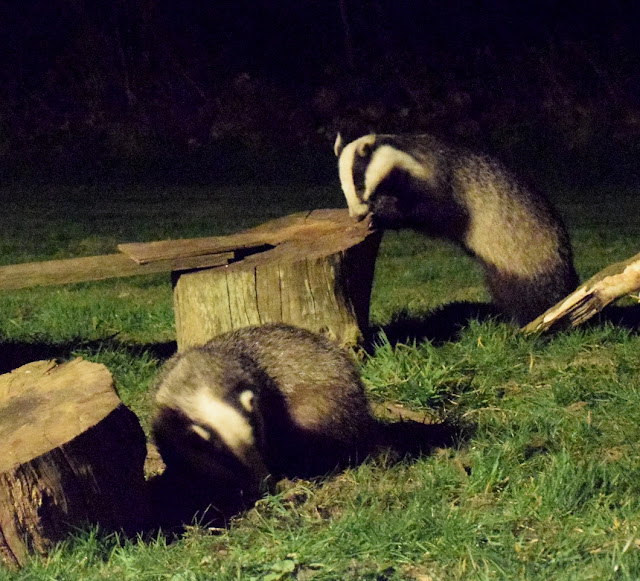 Roe Deer are always good to see there too and we could even have reached out of the car window and touched one as it bolted past us on the way out of the reserve from the Badger watch - awesome!!! 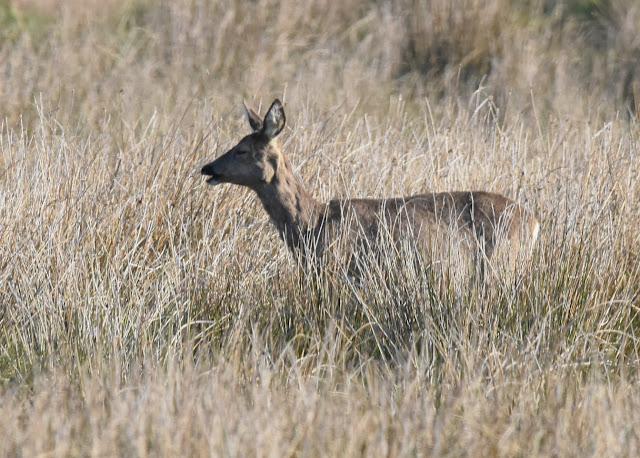 The last couple of days of our trip gave us a distant flock of Golden Plovers (PYLC 123) - not quite the summer plumaged pic we were hoping for but an enforced digi-scoped pic at phenomenal range. Also out on the rocks but not photographable were our first Whimbrel of the year and a local scarcity in the form of three Little Egrets.

Our very last morning gave us another year bird, the Sedge Warbler that LCV had heard the day before.
Back in Blackpool it was only a matter of time before we went to Marton Mere and this time we had our Cetti's Warbler (PYLC 124) success - even got it singing. The relief is palpable. 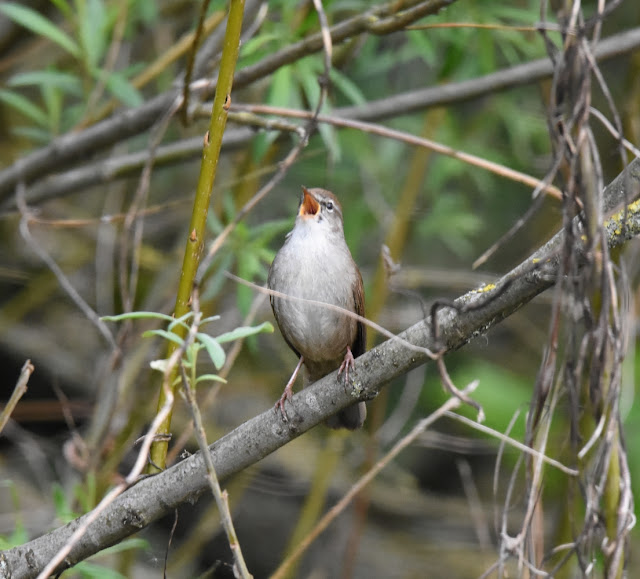 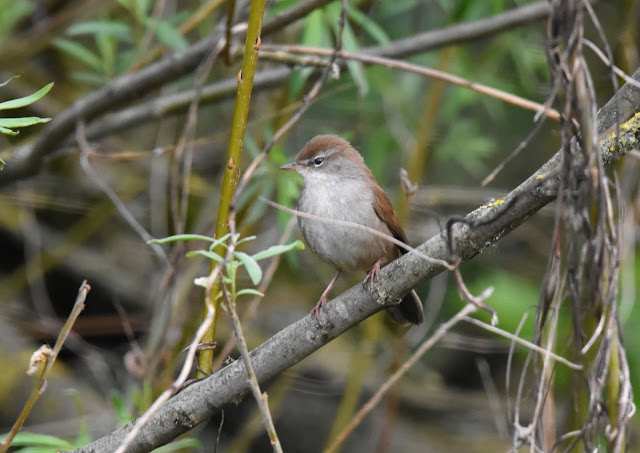 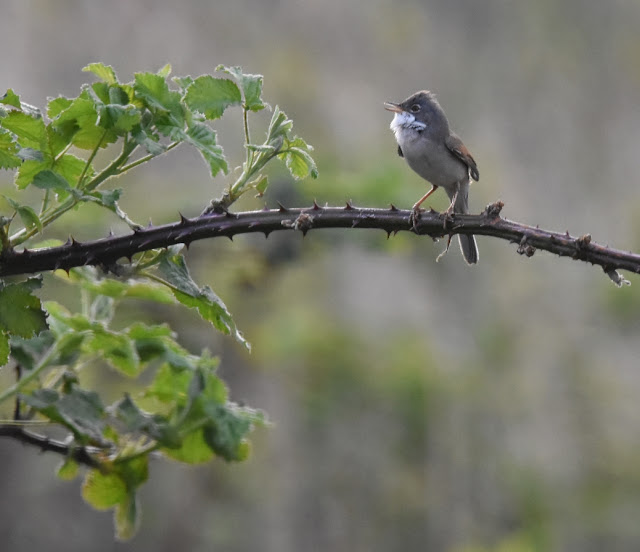 But were still unable to submit Lesser Whitethroat, Sedge Warbler,  Reed Warbler and Grasshopper Warbler to the SD card. Later that afternoon news broke of a nice selection of birds at a bit of a flooded field just round the corner from Marton Mere towards Weeton so we piled Monty into the car and set off. Pulling up we scanned the muddy flood seeing some Black Tailed Godwits feeding in the water and lots of Pied and a few White Wagtails on the mud then a little flit of brilliance caught our eye at the back of the field - result one of the two Yellow Wagtails (PYLC 126). It's such a shame that these are now so uncommon - in our youth aka the old days we came across these much more frequently on our birding days that Grey Wagtails. Could have done with it coming a little close though. 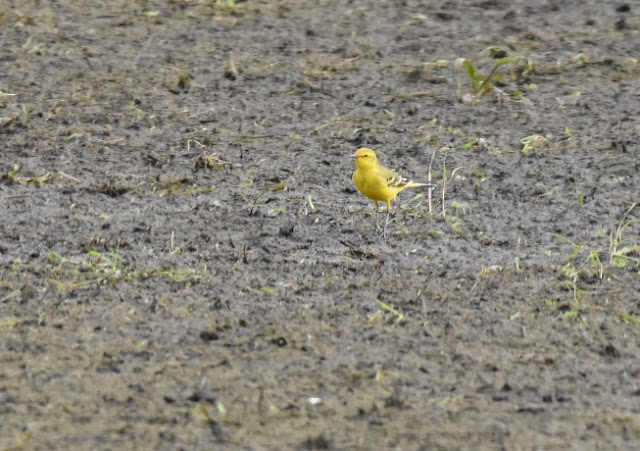 Also in the field and taking some finding as we expected them to be on the mud at around the water margin rather than well away from it in the grass were two Little Ringed Plovers (PYLC 127), again right across on the far side of the field. 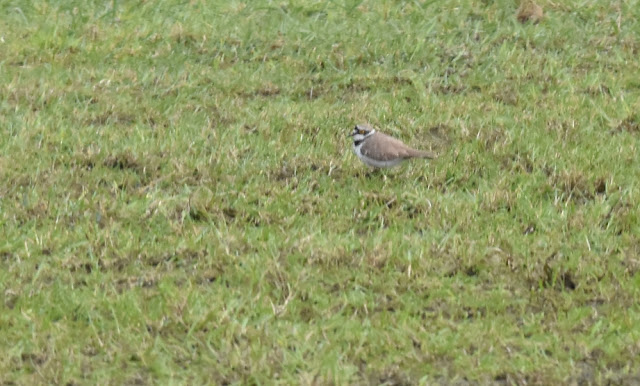 Our next safari was an afternoon out at Brock Bottoms with Wifey where the Bluebells were at their finest. 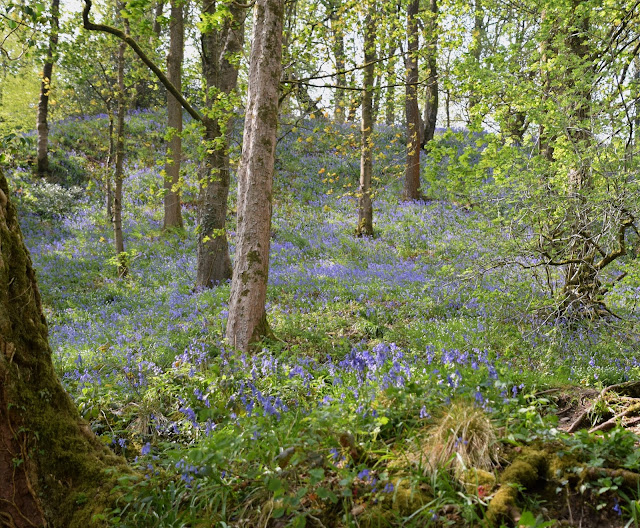 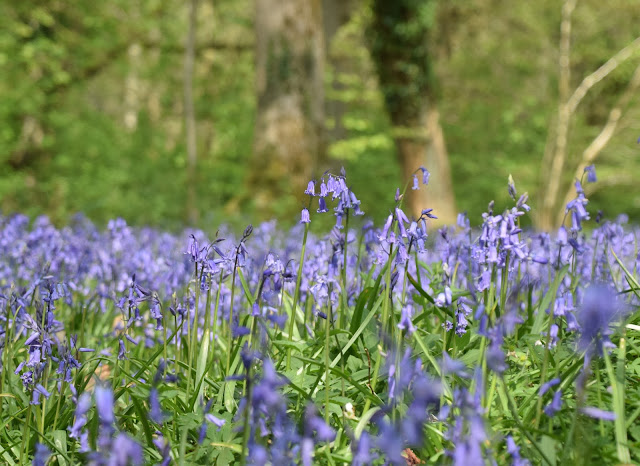 Wifey spotted a butterfly resting on some track-side plants which turned out to be a female Orange Tip laying an egg, the plant being Jack-by-the-Hedge/Garlic Mustard/Hedge Garlic. 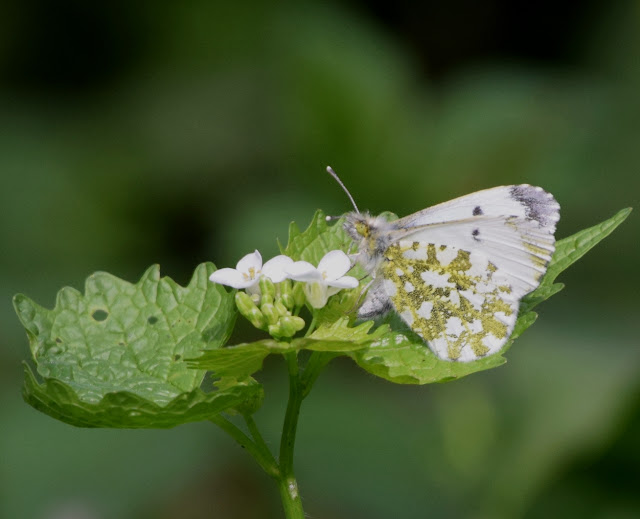 A change in the weather was due and we txtd CR that Stanley park could be good in the morning with Wood Warbler predicted - and would you believe it on our early morning dog walk news broke of a Wood Warbler in Stanley Park, sixth sense/experienced birder/pure fluke - take your pick. They're only ever a one-day-wonder around these parts.
An hour and a half later we'd picked up CR and were watching it infuriatingly flit through the twiggery giving very poor views. Thankfully eventually it moved a few yards and gave much better views. 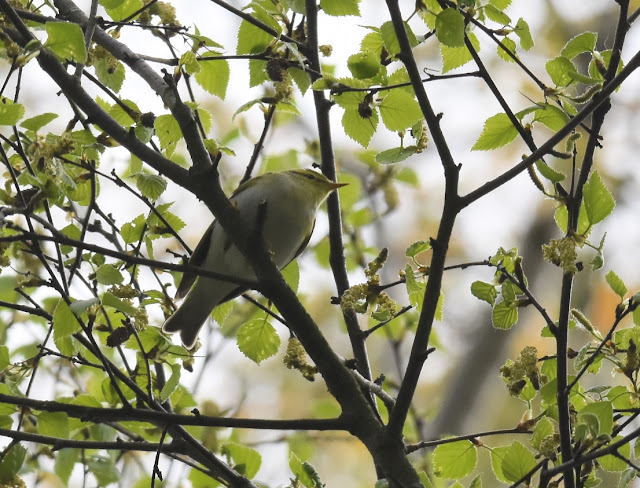 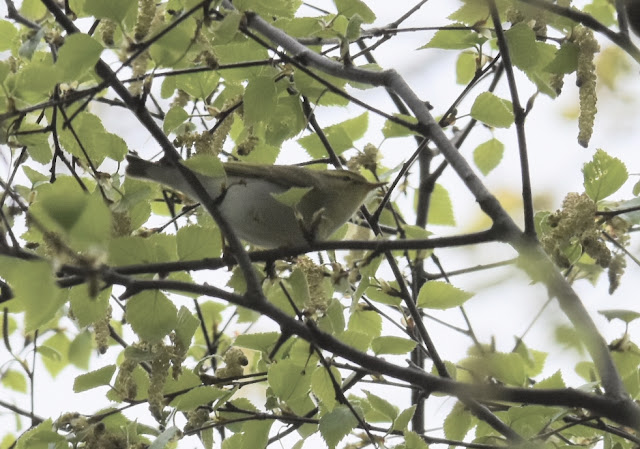 Better views were had through the bins when it showed well again later on in the morning but we had no chance of getting a pic then. Still it's one we didn't photograph in either of our two previous challenges so very happy to add it to this yea's tally at number 128.
While in the park we were told of a family of Tawny Owls over the road in Woodland Gardens so after filling our boots with the Wood Warbler off we went for a look. After looking in slightly the wrong place we came across another lad pointing his camera high into the tree-tops where he kindly pointed out the adult and two fluffy youngsters to us. 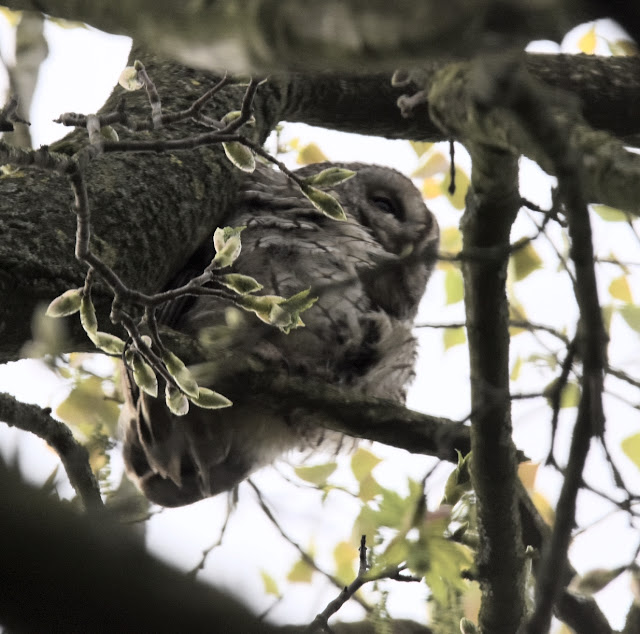 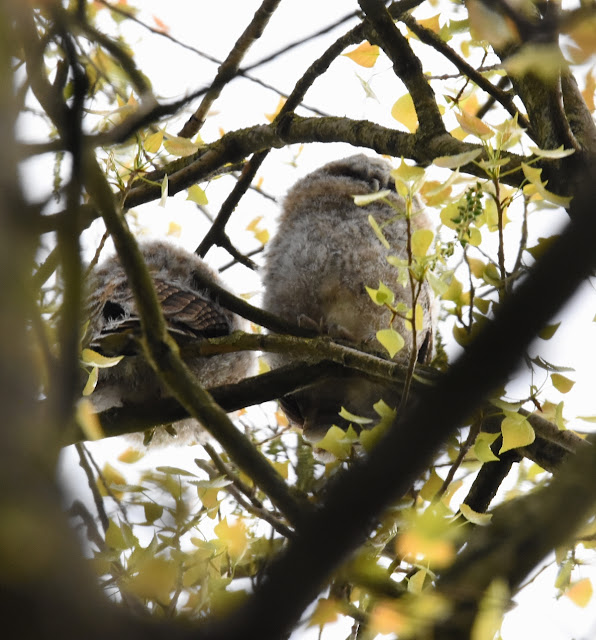 A top morning out!
The following day we left Base Camp in heavy rain and so didn't take a camera with us. Big mistake as when we were down on the embankment at Marton Mere after seeing very little on the way the gulls got up making a commotion and there above them was our first Osprey of the year and well withing range of the big lens and now the sun was shining - dohhhhhh - - you can't win em all!

Never forget you don't have to go to exotic locations and nature reserves to get close to awesome wildlife - here's a gorgeous Small Tortoiseshell butterfly slurping nectar from the Spanish Bluebells (admittedly an INNS weed) right outside the front door at Base Camp. Just make some space for nature in your gardens, doesn't even have to be all your garden just a bit of it will do for starters. 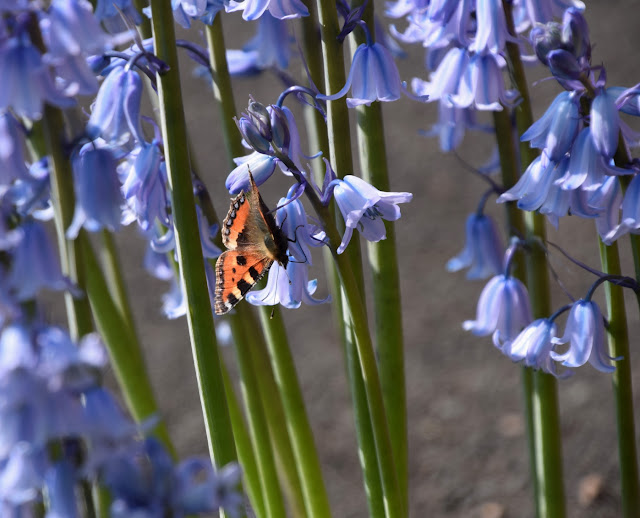 Where to next? Looks like a wet weekend coming up but we have a kids Bird Bingo event in the morning and who knows what might turn up at this time of year and then next week another further flung safari oop north with CR weather permitting.
In the meantime let us know who's the one day wonder in your outback