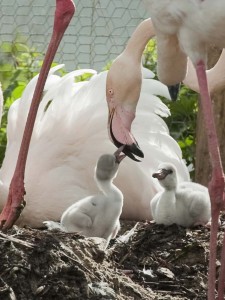 Twenty three eggs have been laid so far this year; so the Grounds team are still expecting many more chicks to hatch in the next week for the award winning Downy Duckling Week, starting Saturday 2 June when visitors can watch and interact with the whole egg to duckling process.

The flamingos, traditionally from the Mediterranean and parts of Africa, nest on bark chippings in their enclosure.  They would usually make mud nests in the wild, but they have grown to prefer bark chippings after they were placed on their Island to assist the breeding of the eider ducks, who were found nesting on the chippings under the slide in the children’s play area.

Centre Manager,Andy Wooldridge, said: “All the greater flamingos that are at Martin Mere 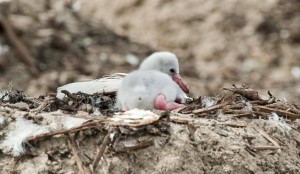 have been bred and raised in captivity which makes them very friendly and sociable birds, you can get very close and even hand feed them. It is very unusual for the birds to use bark chippings but great that the chicks have hatched close together as they form a crèche; giving the community the opportunity of seeing the parenting skills of the flamingos whilst the chicks are huddled together”.

The Greater Flamingos are one of six species of flamingos found in the world. They are the least vibrant coloured of the six species, being a pale salmon pink.

Flamingos are very social birds which need to be kept together in a large group in order for them to be happy. At Martin Mere there are currently have 57 greater flamingos and they choose the same partners every year.  A single egg is laid by each pair and both the male and female take it in turns to incubate.  Incubation takes approximately 30 days and all chicks are parent-reared as these social youngsters benefit from being with their mum and dad as well as with each other.  In addition, adult flamingos produce a special crop milk to feed their babies on (- pigeons are the only other bird to do this).  The fluffy chicks grow very quickly (up to 2cm a day) and they are fully-fledged by the age of 3 months.  They are usually grey or white in colouring and it takes approximately 2 to 3 years to obtain full pink plumage.

Come and see them during the award winning Downy Duckling Week from Saturday 2 June to Sunday 10 June.  The week is your unique opportunity to see and discover how some of the rarest ducklings in the world develops inside an egg and breaks free from the shell into a young bird that you can meet whilst exploring the duckling nursery.