The Safari has been out n about since our last post mostly trying to dodge the weather. We've done a couple of beachcombing and rockpooling events with family groups and of course spent hours staring at an empty sea for National Whale and Dolphin Watch. The latter did give us our record count of 11 Grey Seals in view at one time down at Starr Gate on the first morning, we also manged a distant pic of the 45 or so Sandwich Terns roosting well down the beach for our Photo Year List Challenge #157.

The Sunday watch never happened due to torrential rain. Then the evening before our Wednesday watch we came across (or more accurately Monty's nose came across) a well dead Harbour Porpoise just before the tide came in to wash it off its resting place at the bottom of the sea wall. Unfortunately dead ones don't count on NWDW. Wednesday's watch was also cancelled, this time we'd been invited to accompany Wifey to attended Yorkshire Day celebrations (Heaven Forbid!!!) in Whitby where here works had sponsored the event. not long before we set off news of Bottlenose Dolphins between Barrow and Fleetwood broke - how annoying! But the journey over the moors near Kirkby Stephen did give us a Red Grouse sat on a roadside wall looking forlorn in the filthy mizzle. It would have looked even more forlorn if it knew it was likely to get blasted out of the sky in a few short weeks time. If you're not happy with the wildlife persecution, animal welfare issues and environmental degradation along with the blatant criminality associated with Driven Grouse Shooting then please sign this petition to have the issue debated in Parliament again and hopefully a lot better this time, it's only open to UK residents only though; others can sign this one.
Over on the east coast there was a thick sea mist reducing visibility to no more than a few hundred yards but on our short drive along the coast to our hotel we did sea both Gannets and Fulmars much closer than we ever do here on the west coast.
While Whitby was great as ever and we were made to feel very welcome even though we were 'from the Dark Side' actually we though we'd GONE to the 'Dark Side' it was good to get back to the west coast.
Saturday's watch proved disappointingly fruitless on a flat calm sea apart from a couple of Grey Seals, similarly Sunday's watch helped by experienced cetacean surveyor SD was also sadly blubberless.
The sea did throw up some surprises though, on our family events we came across three new species we've notseen on our coast before. The first we thought we'd found ourselves only to discover later it had been picked up and discarded by one of the young lads - the leg of a Spiny Crab. 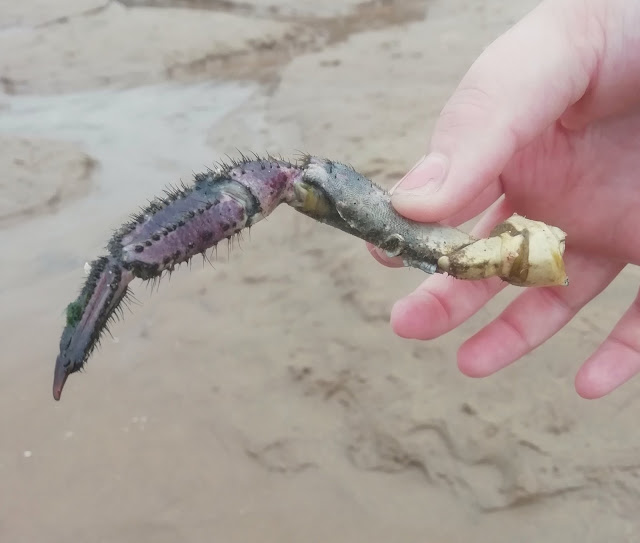 Our next new species were also found by the youngsters, Chameleon Shrimps and a lovely juvenile Gurnard possibly a Tub or Grey Gurnard.
And so to south Cumbria where we joined JG and AK for another wander round the private reserve to see what we could see. It was AK's first visit so we hoped it would be a good one. The drive through the reserve to the car park proved fruitful with a Roe Deer peacefully grazing away right beside the track.
Our first check on the snake areas was unsuccessful but wandering along the boardwalk and coming to the Moss a bird on the overhead wires caught our eye, checking it was 'just' a Tree Pipit revealed it wasn't it was a Whinchat and apparently quite a good record for the reserve.
At the wee bridge a very quick Kingfisher flew almost over our heads and a mixed flock of small birds flitting around the scrub on the otherside of the bridge gave us juvenile Willow Warblers, Chiffchaffs and a cracking Wood Warbler, along with a couple of Blue and Great Tits. The rest of the trail around the Moss was fairly quiet although we did hear a distant Golden Plover calling from the fell tops away to our left and eagle eyed J spotted the tiniest of juvenile Common Lizards and an adult that had lost it's tail.
Back in the snakey area there were no snakes again. Now it was lunchtime and getting our butties from the cars we spotted this Southern Hawker flying around the far side of the car park. 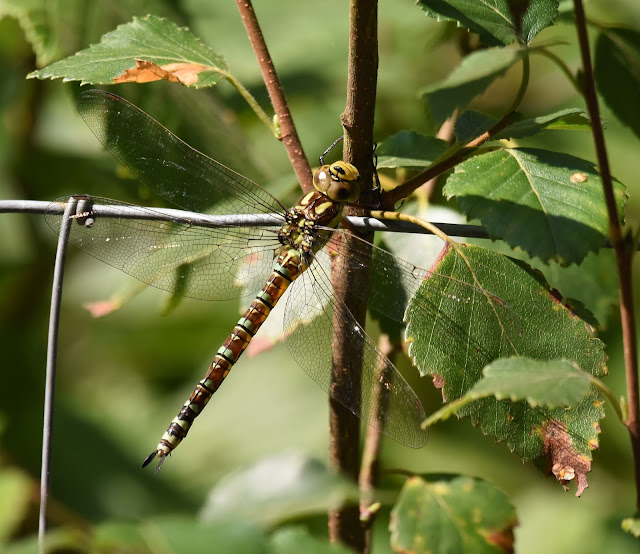 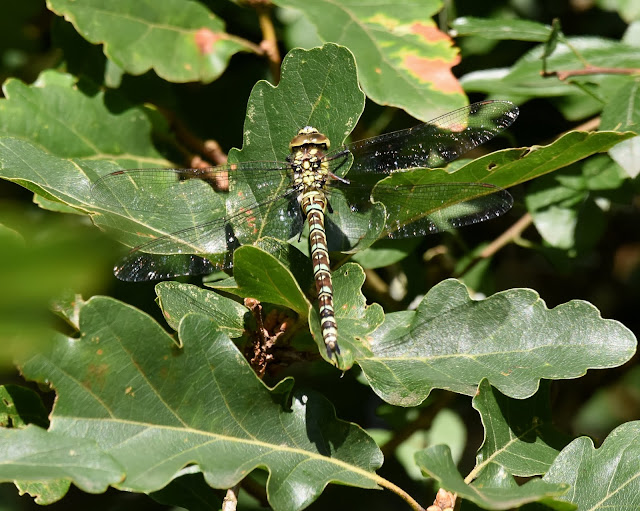 What better way to spend a leisurely lunch-hour than watching the butterflies on the Buddliea and wildflowers in the garden over the wall from the visitor centre terrace and the male Osprey flying around with fish for his youngster. 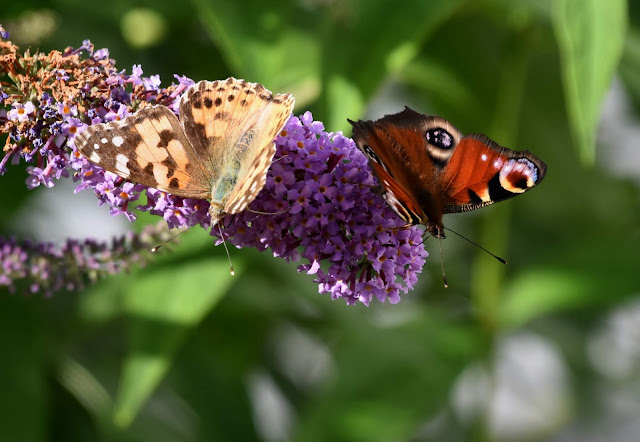 After lunch we took a stroll through the woods down past the lake where we had a brief view of a blue dragonfly, almost definitely a Broad Bodied Chaser. At the pond we were well watched by another Southern Hawker and one of the several Common Darters perched briefly but not long enough for a quick pic on the top of J''s head.
Beginning to run out of time we decided to head back and have another look for the snakes. No joy again but along the boardwalk several Common Lizards had come out to bask in the afternoon sunshine, flattening themselves against the base of the tree trunks to absorb maximum warmth. 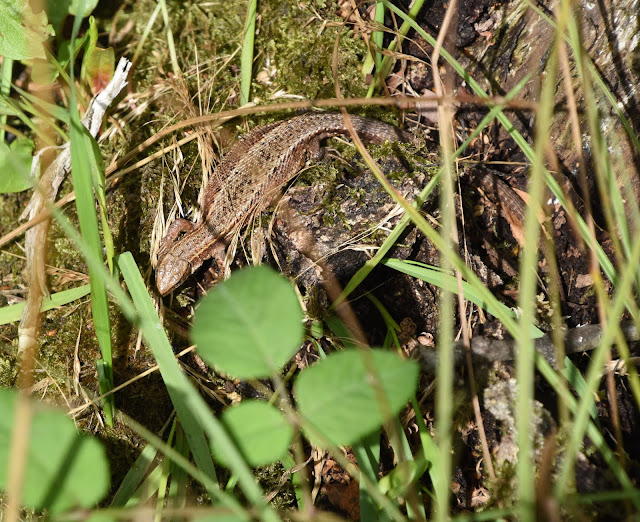 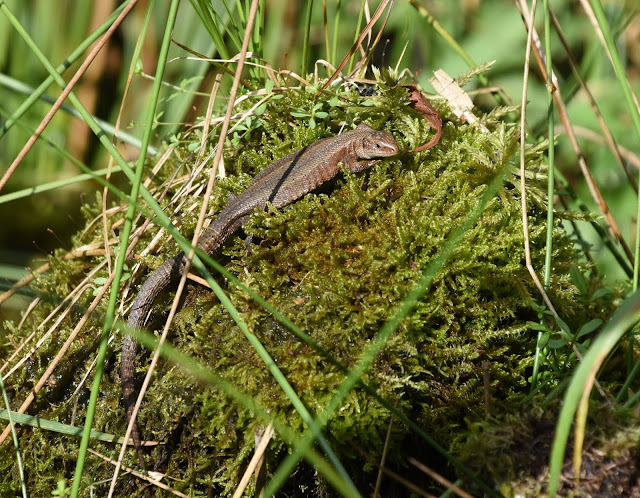 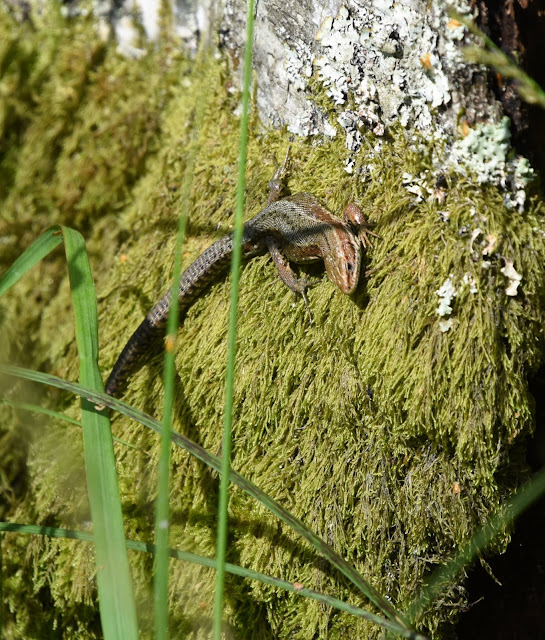 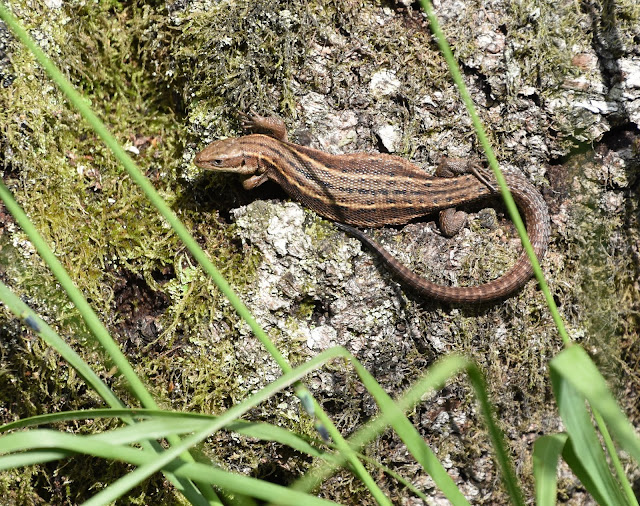 We were hopeful that there might be an Adder or two out hunting them but it wasn't to be.
Checking some Bracken patches for said slitherers we disturbed numerous Grasshoppers 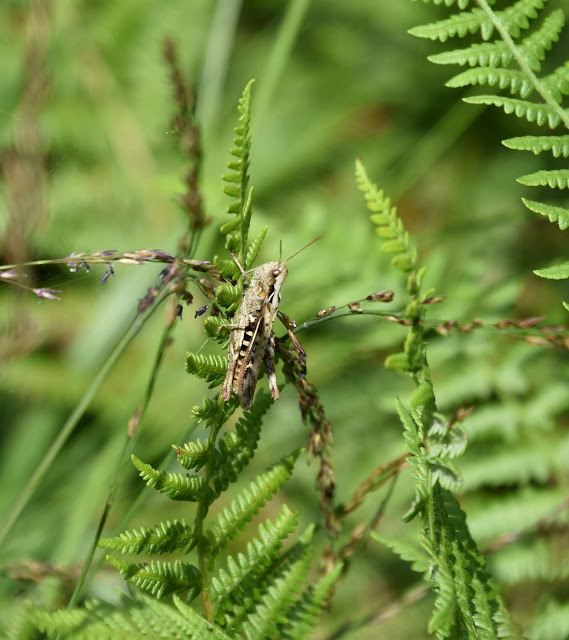 and watched a very small juvenile Common Lizard try to hunt down an ant which got away as it was too big for the lizard's tiny mouth to grab it.
At the edge of the moss we came across a stunningly bright female Black Darter 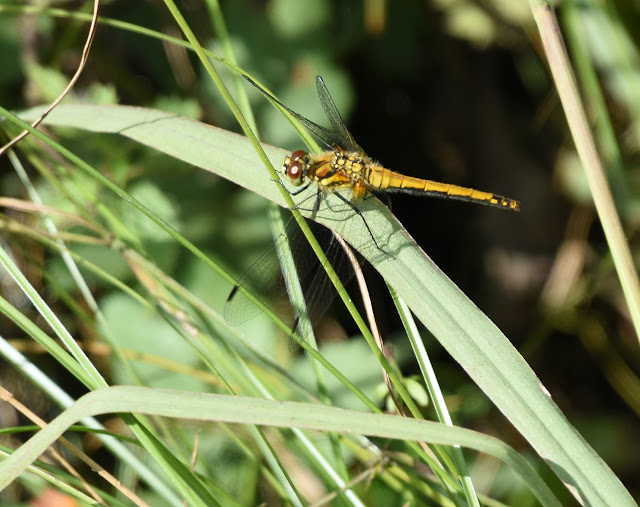 It was then we noticed that time had pushed on and it was time to head back to the cars - time really flies at this site it's that good even though it's not that big.
The drive back to Base Camp started with us spotting about 20 odd Red Deer mooching in a field with the local sheep down the hill just outside the reserve entrance.
So yet another superb safari to this wonderful reserve with great company even if we dipped the snakes. We'll be back before too long that's for sure.
At the end of last week we enjoyed brilliant naked eye views of a Harbour Porpoise happily feeding away on a flat calm sea only about a hundred yards off the seawall while walking Monty, why can't they make an appearance during NWDW so we can send back a sheet with a positive result on it for once.
Where to next? We've a safari planned with some friends later in the week and if they make it it might be their last chance of enjoying some greenery before they head off to work in sun-baked desert lands
In the meantime let us know who's slithering through your outback