Thanks to Peter Jepson (Ecologist), I have now been able to add a further 9 species of Spagnum to the Mosses of Grane List. These were identified on Haslingden and Oswaldtwistle Moors.

Also thanks to Charlie Payne for sending in photos of evidence of Freshwater Mussels that have been found on Holden Wood Reservoir (Bay Area). I also received reports from as early as the middle of last year that it was noted that freshwater Mussels where seen to be uncovered and left dying, probably owing to the more recent changes in water levels which the reservoir has been subjected too, this I believe has been necessary for the carrying out of certain essential repairs. It is now thought that these samples of old shells found on the walls, where the result of possibly corvid predation and then bringing the Mussels over to the perimeter walls to try and smash the mussels on the wall to open them. 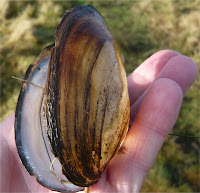 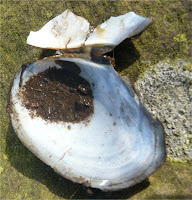 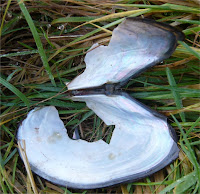