The Safari was in the middle of the washing-up this morning when the phone rang. We couldn't answer it but a few minutes later listened to a voicemail from LGB telling us a Risso's Dolphin was heading slowly north past him down at Starr Gate and could well come past Chat Alley where he knew we'd be walking the dog sometime early morning.
We listened to the message at about 09.10 and immediately donned our coat, grabbed our bins and bundled Monty in to the back of the car for the fastest drive to the prom of his life!
It was now nearly 20 past, there was no sign - had we missed it? We kept an eye on the calm sea southwards with a few scans to thw northbut nothing was seen. A small flock of Common Scoters flew past close in, close enough to pick out the paler females with the naked eye - not often that happens here!
Still no sign of any blubber - we thought at least there might have been a Harbour Porpoise out there, we've not seen one for ages and some of the fishermen have been saying they've been catching Whiting, the Porpoises' favourite prey.
A dog walking friend came along and asked what we were looking for and it was while chatting about the news from South Shore that we picked up the Risso's Dolphin coming towards us quite slowly about 3/4 of a mile off North Pier. It surfaced a few times then made a longer dive before coming to the surface again a couple of times, getting nearer all the while. We saw the huge splash of a breach in the corner of our eye and are a bit miffed we missed seeing the animal leap out of the water. But from then on it surfaced much more regularly and now didn't seem so far out maybe only 1/2 a mile and not far beyond the low water mark. It wasn't to hard to spot with the naked eye now, but getting the other dog walkers on to it was difficult as there were no real landmarks (shouldn't that be sea-marks?) to point them towards and sadly neither of them managed to see it. Meanwhile we were getting quite good views in the bins, the blunt head was obvious and the sickle shaped dorsal fin was particularly hooked although it was still to far away to be able to make out the scarring typical of the species. We watched get closer to the yellow buoy but didn't see it pass it, it would have been closer to the shore than the buoy, and we didn't see it again. What a great morning and a huge Thank You to LGB for the head's up. A cetacean Lifer for us...well chuffed indeed.
In other news we've had the stealth-cam deployed in the garden at Base Camp with the hope of getting evidence of some unusual behaviour from fairly normal garden birds.
Here's a selection of the usual garden feeder visitors - apologies for the quality of our aging camera 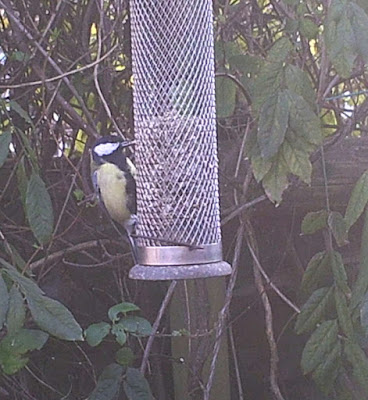 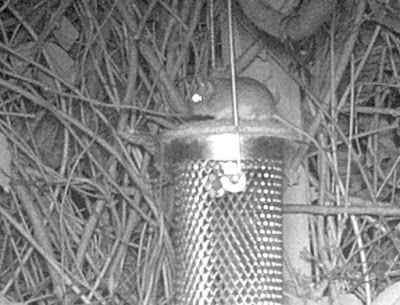 And now the two pics we'd hoped for. A couple of years or so ago we got a pic of a Dunnock on this feeder taking sunflower hearts but hadn't seen one doing that since then until a week or so ago when it happened a few mornings in succession but every time we'd dashed off to get the camera it had gone not to return by the time we got back to the kitchen window. So we decided to be sneaky and set up the stealth-cam in the hope of snapping the evidence.
But better was to come further down the SD card. We were surorised to open one of the images and see a Robin was doing the same, something we've not seen from the kitchen window. Again has anyone else seen Robins using wire feeders? 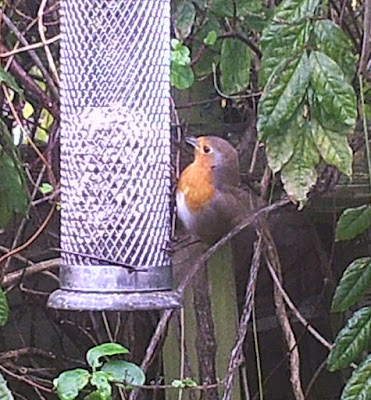 Isn't wildlife brilliant - a totally unexpected Lifer on one of our Patches and some unusual behaviour from 'ordinary' species in our own garden, doesn't get much better than that and no need to travel to far flung or exotic places...well actually Blackpool promenade is pretty exotic!
Last Monday was a dry, calm and sunny day wit ha bit of a frosty start. We've not had a full day out with Wifey for a while and seeing as how she was on a long weekend we decided to venture into Lakeland for a scenic low level walk. We picked her sister up on the way and headed to the well known beauty spot Tarn Hows between Coniston and Ambleside.
Beauty spot is an apt description, it was glorious up there. Cold and crisp with the frost on the grass lingering all day in shady glens and a bit of snow on the higher mountain tops.
The bright blue sky and lack of breeze meant some reflection photography was order of the day. 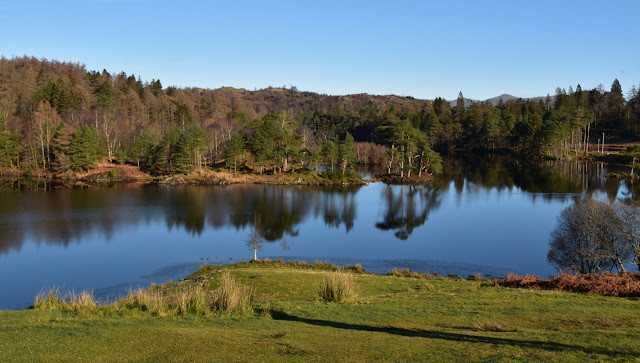 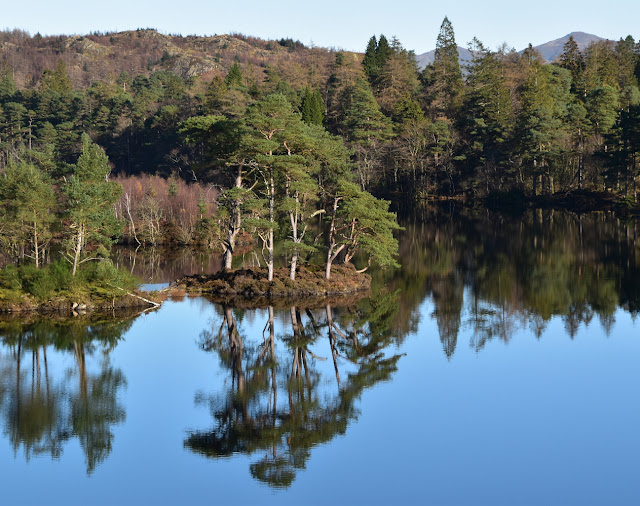 There wasn't too much wildlife to be seen, a couple of female Goldeneyes and a female Goosander on the tarn and the odd Raven and Buzzard passed overhead.
The only slight dampener on the day was we couldn't walk the full circuit of the lake as the furthest third was out of bounds due to some serious tree felling. The Larches had contracted Phytopthera fungus and were having to be felled, 100m around each infected tree, this meant the peace and quiet was non-existent until the workers stopped for lunch then it was noticeable how quiet it was out there with just the 'tseep' of occasional Goldcrests and a Treecreeper in the remaining trees and the 'wacka-chacka' of a passing Fieldfare flock to break the deep silence - not even the few remaining leaves on the deciduous trees made a rustle.
Where the Larches had already been felled it looked devastating but the extra light reaching the woodland floor should allow a much more natural forest of Birch, Rowan, Alder, Holly, Oak and especially Juniper to reclaim their rightful place on the hills now the alien conifers have been much reduced. Although within the walk there were some Belted Galloway cattle, and much worse for any tree seedlings that might try to get established, Herdwick sheep. 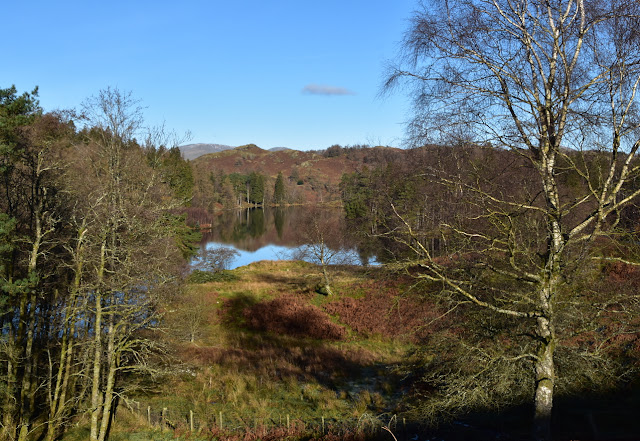 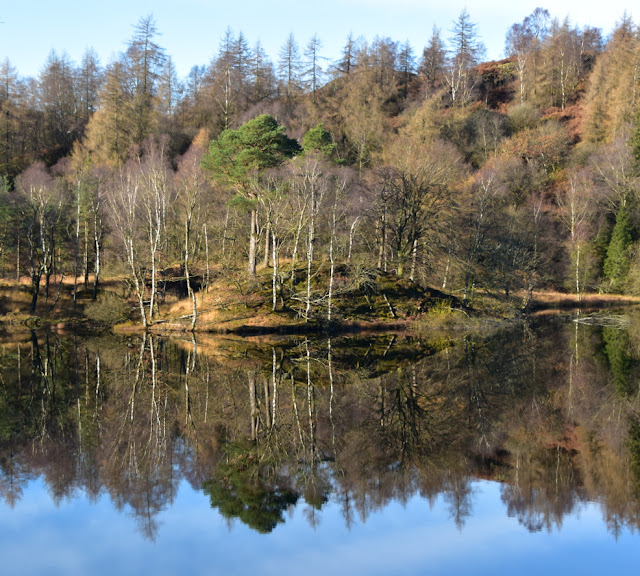 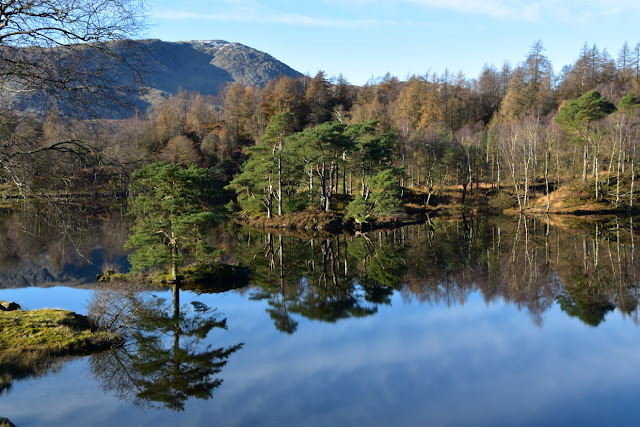 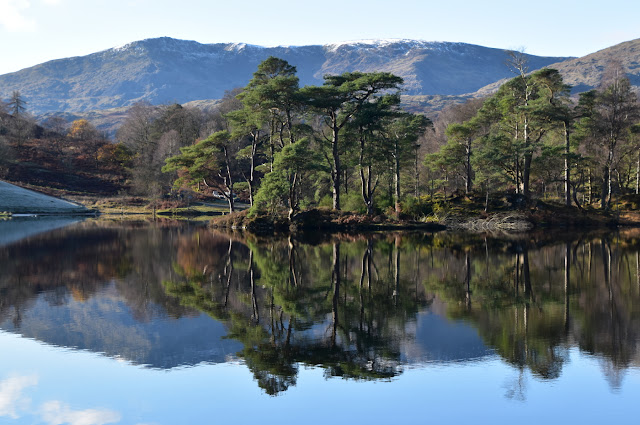 There's a few more pics over on our Flickr page.

The hill with the dusting of snow in the distance is Wetherlam. Many years ago when we were in training to climb Mt Kinabalu in Borneo we were up there in much snowier conditions and managed to slip very badly on some sheet ice we were actually doing our best to avoid as we knew it would be tricky not far from the summit. We really thought we'd done a knee ligament in and were seriously considering having to call the Mountain Rescue team out to stretcher us down. Being mid-winter it was already going dark in the valley below us but somehow we managed to hobble/slide down the trails to the car parked at the foot of Coniston Old Man from were we had a horrendously uncomfortable drive back to Base Camp barely being able to press the clutch to change gear, think we only used second and fourth all the way back. A lucky escape!
Yes we did make it to the top of Mt Kinabalu, the conditions and view were much the same as those at the top of Wetherlam or Coniston Old Man most days - cold wet and windy with a view of the inside of a cloud! 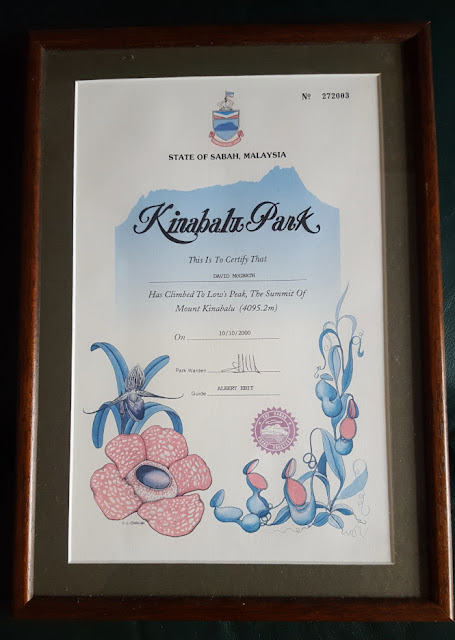 Where to next? A bit of a sunset and a Starling murmuration to be a enjoyed means another visit to the prom.
In the meantime let us know who's clinging to the wires in your outback.