It had been months since I’d seen a Barn Owl after something of a bonanza in 2019 when almost every outing had produced one. So what could be better than to start Saturday morning with a Barn Owl and a good one at that?
A drive over Stalmine Moss on Saturday morning in the half-light of 0730 saw the owl as almost the earliest bird and the first to make me stop and then lift the camera. It was snap decision time - the light was poor. A clicked on F7.1 at ISO 1000 and crossed fingers. A few snaps and the owl detonated off the tree stump and out of sight. So it goes, all of fifteen seconds with the ghostly apparition. Barn Owls are not there for our human ephemeral delights but to simply grab a meal without worrying how long their pose lasts. 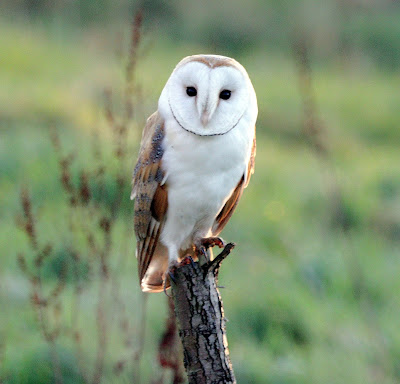 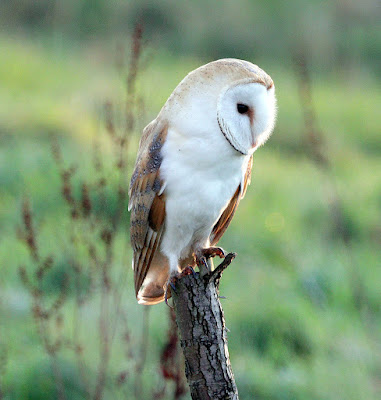 Barn Owl
That’s all very well but how does one follow a splendid creature like a Barn Owl? Well how about a major rarity, a Corn Bunting? There were two along Union Lane that flew from a straggly bush and into the rough field beyond and where I struggled to see them again. It’s a location I have seen Corn Buntings in the past and where a couple of years ago one sang from the same roadside post for a week or two. 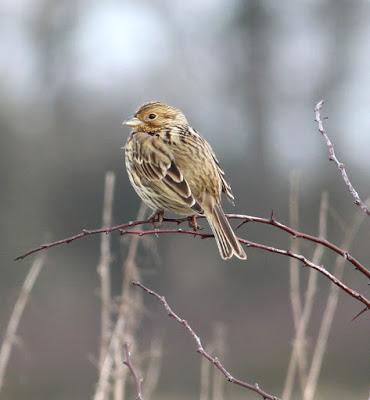 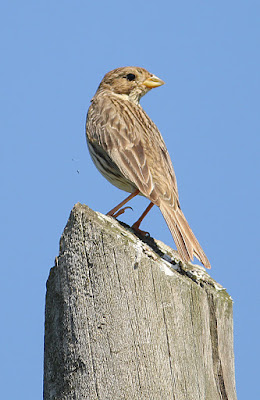 Corn Bunting
Recent WhatsApp forums report more Corn Buntings, up to 100, not far away at Eagland Hill in recent weeks. These may be addition to these two on Saturday plus the five to ten I’ve seen on Rawcliffe Moss in the last ten days or so.
It's likely that all of these Corn Buntings are of the same ilk, ones that at times congregate together at scattered feeding sites or form overnight roosts. This is very much a mystery invasion because no one knows where these Corn Buntings come from. They have not returned as a precursor to the breeding season but more of a visitor who arrives in deepest winter and then departs very soon after.
As discussed a number of times on Another Bird Blog, the Corn Bunting is more or less extinct as breeding species in this flat Fylde of Lancashire, as for a number of years now it is a winter visitor only.
As a species the Corn Buntings is known to be pretty home loving with its movements and migration on a small scale although both the 1998-91 Atlas and the Winter Atlas suggest that some breeding areas are abandoned in winter as birds move to coastal areas. My own theory is that the Corn Buntings we see in winter are part of the fragmented population of the most northerly and eastern parts of the UK, whereby some individuals move a little west during the coldest part of the year.
The Bird Atlas of 2007-2011 shows the English population of Corn Buntings consists of small scattered populations along the South Coast from Dorset to Cambridgeshire and then Kent to Suffolk, plus arable farmland on the East coast from Norfolk and up towards Durham. Almost certainly, the larger population of England has declined again since 2011, just as in the Fylde.
Meanwhile, the Corn Bunting is now probably extinct in Ireland and almost so in Scotland where a tiny relic population clings on in the Uists of the Hebrides.
If only we could ring some of these winter birds, both BTO ring and colour ring, a relatively easy way of learning more about a species; unfortunately Corn Buntings are notoriously difficult to catch in both the breeding season and the winter during times of bare cover. A search of BTO data reveals the number of Corn Buntings ringed in recent years as:
34 in 2014
90 in 2015
36 in 2016
52 in 2017
56 in 2018
These figures include nestlings ringed, just 53 for the five years above 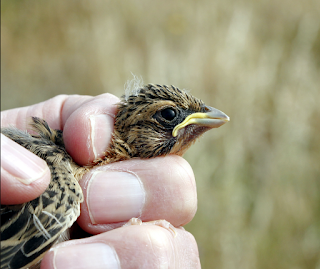 Corn Bunting
In other words, a pretty poor data set from which to work to discover just what is happening to our Corn Buntings. I fear we may be past the point of no return for this most iconic species but I hope not.
I managed to resist the lure of Eagland Hill on Saturday, the now long lost Purple Heron, the subject of millions of digital images. 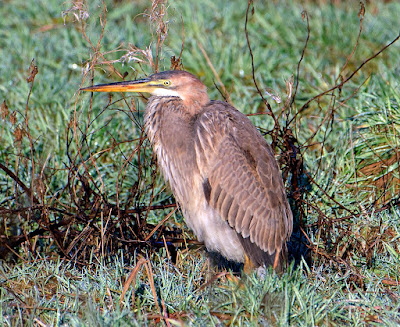 Purple Heron
It seems the local farming community are fed up of countless tickers parking in their single track passing places. One such farmer, sick of the daily stream of ne'er-do-wells has decided to cut his field of heron-friendly long grass in mid-January. It’s a task normally left for the warmer, dryer days of March. But now in an effort to kill two birds with one stone, fettle the field so as to encourage the heron to find another source of animal matter many miles away while at the same time inspire selfish and inconsiderate tickers to follow suit. Perhaps go birding instead?
I think Plan B may be to shoot the heron and return Eagle Land to rural peace and quiet of Old Lancashire where eagles, kites, harriers and buzzards soared all day and the sheep knew the rules. 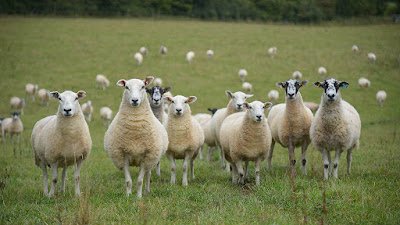 Sheep at Eagland Hill
Another Bird Blog is back soon with more tales of birds and folk. Don't miss the news.