If only! Forty refers not to the ages of the ringers but to the number of Linnets captured at Gulf Lane this morning.
Morning arrived with overcast skies, a slight frost and zero wind so Andy and I set a couple single panel nets in what is basically a field of flat vegetation. After the catch of 25 Linnets on Thursday last we set the whoosh net again, hoping that one or even both catching systems might work. 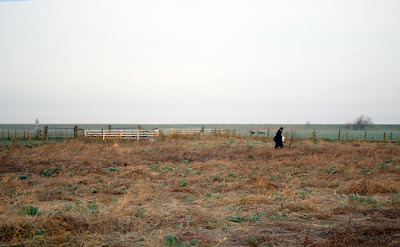 Morning Start
We have noticed how in the last week, and as the natural seed depletes, the Linnets are more prepared to come to our supplementary seed. 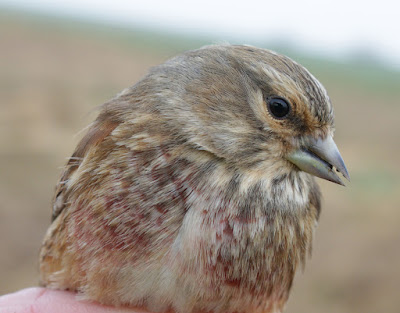 Linnet
Lack of food in winter has been identified as a contributor to the national declines in numbers of some farmland birds. The observation that many farmland birds use of game crops in winter prompted research into the potential of seed crops as a conservation measure and to then develop it further in helping those species that had suffered. Nowadays wild bird seed mixtures are included as an option in agri-environment schemes and appropriate Countryside Stewardship habitat options.

Different seed crop species retain their seed for differing periods through the winter. By January and certainly into February overall seed supply reduces greatly, and is often completely exhausted. For these crops, seed supply declines as bird numbers increase during the first half of the winter, and bird numbers then drop in response to the continuing decline in the supply of food, the so called “hunger gap”.  This is a time when supplementary feeding is hugely beneficial in keeping birds alive.
Our supplementary seed proved its worth today when we fired the whoosh net three times as the Linnets came back for more of the millet/rape seed.  Of the forty Linnets caught, 30 came from the whoosh net and 10 from the mist nets. 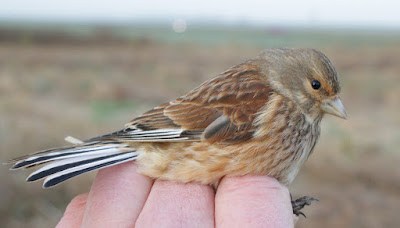 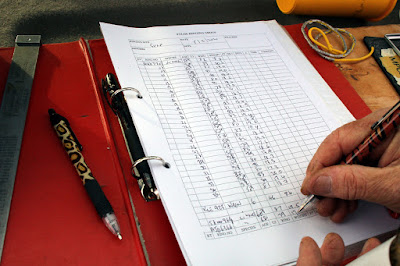 Field Sheet
The forty comprised 38 new ones and 2 recaptures from previous years. It’s very unusual to have recaptures here at Gulf Lane, the huge turnover of Linnets during a typical winter means the odds of catching the same bird twice are very low.
At the foot of the sheet are the two recaptures - S800964 an adult male, and AJD6366, an adult female, the first recaptures of the 2019/20 autumn/winter.
S800964 was a large male with a wing length of 87 mm, the only recapture since it was first ringed on 9 March 2018.  Female AJD6366 was first ringed here on 22 November 2018 but not in the intervening period until today.
A single Wren made 41 birds for the day. This is the only capture of a Wren on site throughout the whole of the winter, even though there is always one around. 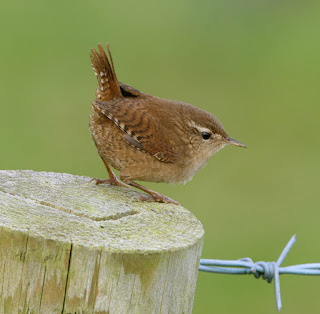