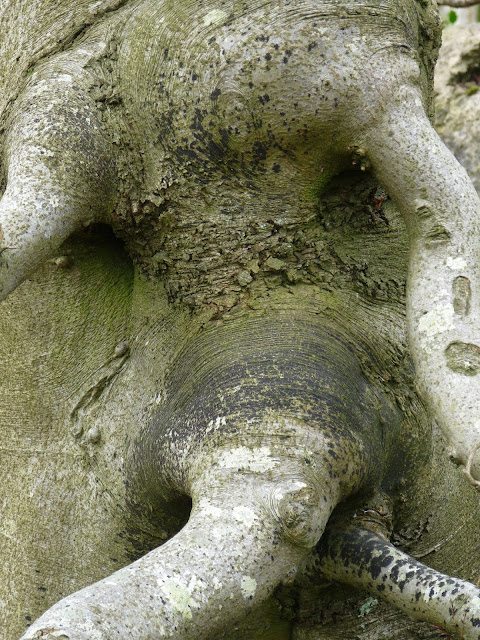 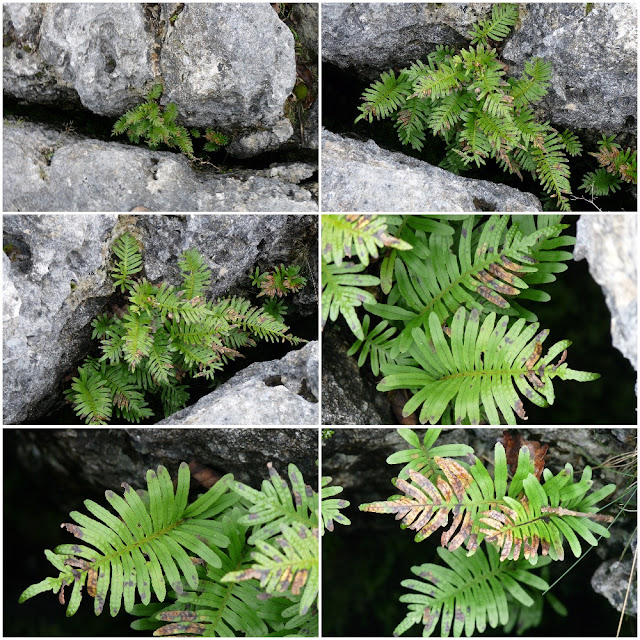 (Southern Polypody) - Polypodium Cambricum No.1 which lies down a gryke on LCS (CWT)
Photo: 4th March 2020 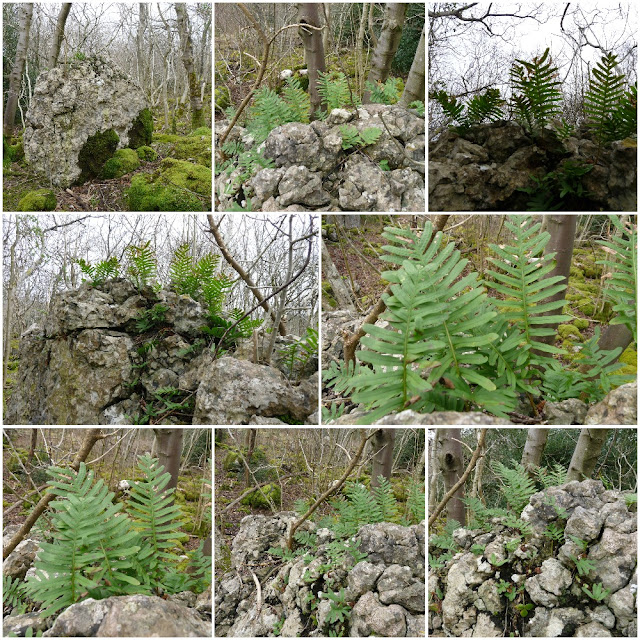 (Southern Polypody) - Polypodium Cambricum No.2 which lies on top of a large limestone boulder within a woodland on LCS (CWT)
Photo: 4th March 2020
Today I set out hoping to catch a few hundred Geese (Pink Feet) flying above us, seeing as the East Coast has been getting blitzed with them for the last three days all heading North or North West... I have scanned the skies until I was dizzy and NO GEESE!! but lots of other stuff to take on.

My first call was Dalton Crags, then over on to the Hutton Roof Common, before making my retreat down through Lancelot Clark Storth.

As I entered Dalton from Nineteen Trees, I could not help but hear and see hundreds of Chaffinch mooching about in the trees overhead, flying across and leaving the floor.. then further on they all decided to move to another part of the woodlands.  I counted them as they flew over in the regular parties and had a total of 626 birds over about 20 minutes.

It wasn't long before I was hearing SKY (the skylark), she's finally back on territory singing her little heart out in the regular spot as we see her every year, just has you enter the upper Dalton Crags. I met a friend who confirmed she was back yesterday.  Also whilst going through the deforested section I had a male Stonechat.  The bonus soon came with my very first Meadow Pipit on the return to the uplands and crossing in front of me heading to the North West.  If the weather stays similar I would expect a few more over the coming days. Also whilst in this section there was a lovely singing Song Thrush who occasionally would do renditions of Curlew and Tree Pipit.. Lots of Bullfinch around at the moment all singing away with their sad "peeu" calls. In Lancelot I had a lovely sounding Great Tit who was doing the hou-whit - who was so clear on the returning whit part.  In fact this was only one of his OVER 200 SONG REPERTOIRE. Normally I hear him doing it later in the year when he can confuse you with the contact calls of the Willow Warbler, Chiffchaff, or Common Redstart (which all make the hoo-whit call). But today he was so clear and precise, in fact I called him back a few times which I thought was a good imitation and he was such a good chap he responded without problem... Also a Green Woodpecker yaffling away, odd Nuthatch and 8 Redwing foraging.

Now then checked out the Early Purple Orchid rosettes and they are doing well with plenty this year, certainly seems that way in comparison to other years. Here below is a sample of some of todays rosettes which were averaging around the 3". 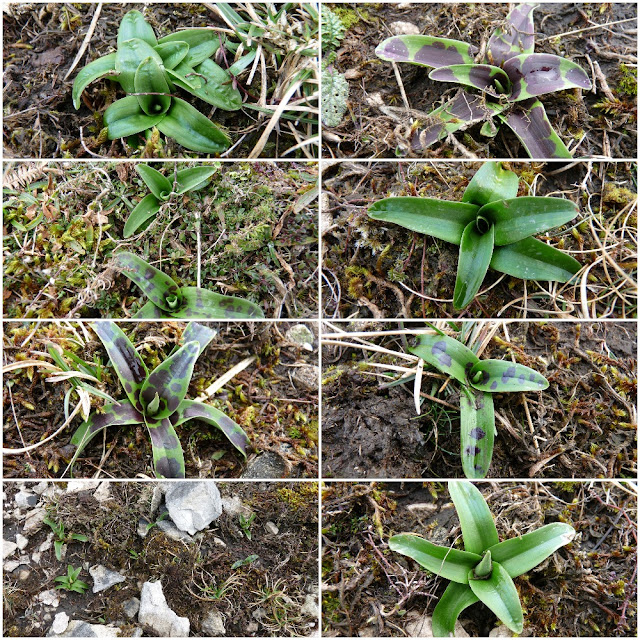 Next was to find a few ferns hidden away. Well first of all I checked out the Polypodium cambricums of which we have 3 on Hutton Roof and two where within striking distance (see photos at top of page). Not bad to say they were last years,  No.1 lies about one metre down a gryke on a limestone pavement and No.2 lies within the middle of woodland on the top of a large limestone boulder.   Also I found some of last years Rigid Buckler Ferns (Dryopteris sub-montana) and also some nice Hard Shield Fern (Polystichum aculeatum) 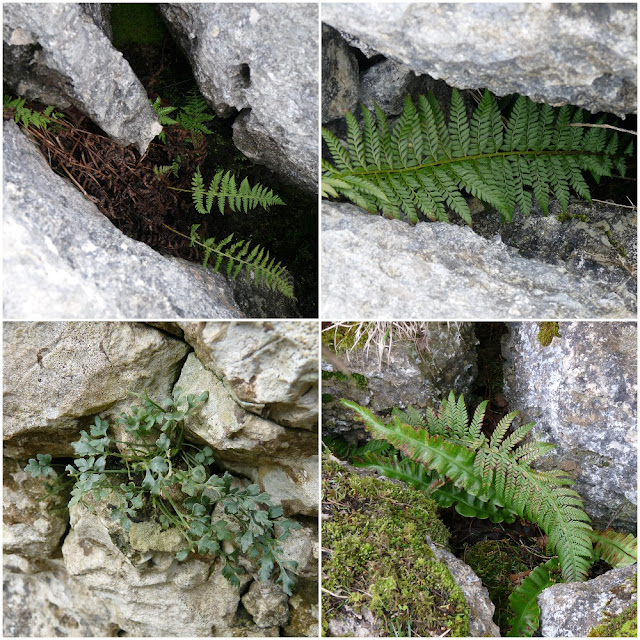 Top left: Sub-Montana (Rigid Buckler), Top right: Polystitchum aculeatum (Hard Shield)
bottom left: Asplenium ruta-muraria (Wall Rue) bottom right: Aculeatum and scolopendrium
Whilst checking out cambricum no.2 I just could not resist taking a few pictures of this fabulous tree and such lovely faces it was pulling, it definately was worth a few minutes staring at it. It sort of reminded me of a kids programme or pantomime or some far recollection. Here are a few photos. 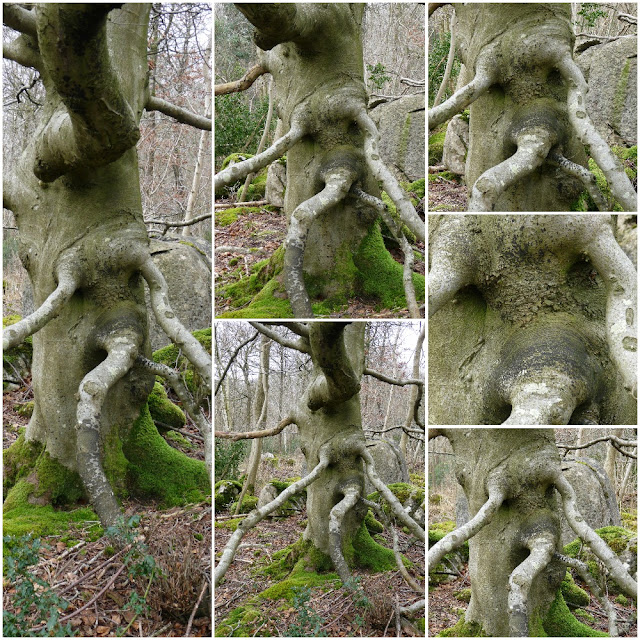