The Safari has been quite busy with wildlife and other stuff since Christmas, mostly other stuff including another operation on my already butchered hand at the end of January which curtailed safariing for most of February but is now mostly fully recovered.
With good news from the Sand Lizard project we've been working on for the best part of a decade we decided to celebrate in hip n trendy style and get ourselves a congratulatory tattoo. 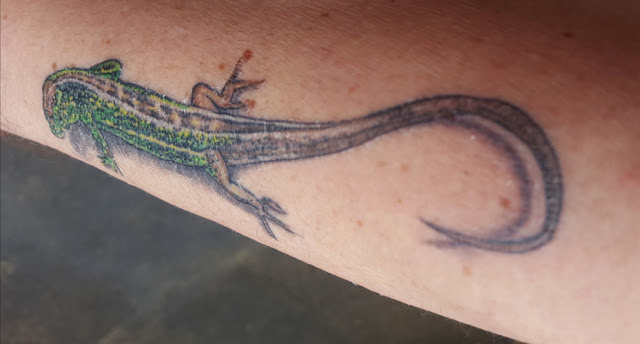 In wildlife news we've been continuing or Photo Year List Challenge with Monika and the gang. This year it's open to all vertebrates and so far we've managed 132 species. This Lesser Spotted Catshark eggcase we found the other day was accepted as a 'Yes it counts' by all in the group to become our 132nd species. 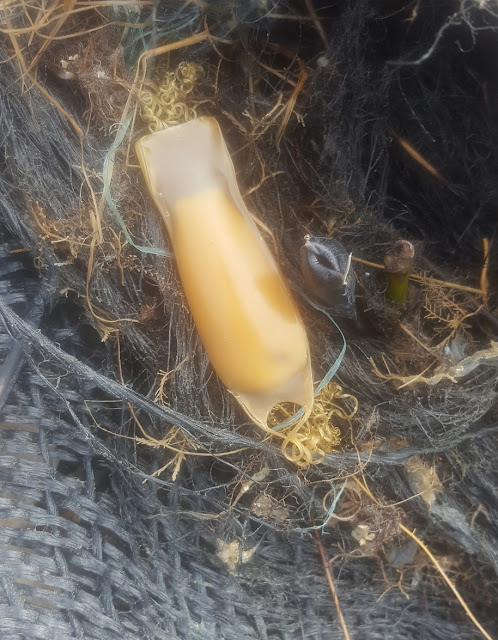 No doubt you're all aware there's a bit of a health issue going round at the moment - seems akin to the Black Death of the Middle Ages - so although not entirely put on hold the Vertebrate Challenge has been replaced by a 2 Week Photo Bird Blitz taking us up to the end of the month. One simple rule - All species must be photographed within a mile of home - a good excuse to get out with the camera, get some excersise see some wildlife and maintain the all important Social Isolation. This Sparrowhawk was soaring over Base Camp yesterday.
Deadly disease or not the mutt still needs a walk and Chat Alley and the beach are within our mile radius. Neither a bird nor other vertebrate we found these odd cocoons made of sand stuck to the sea defences a couple of days ago. Wonder what they'll turn into, Anyone any ideas. 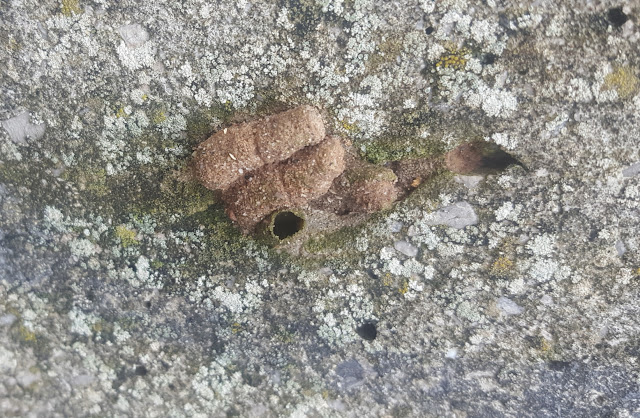 This morning there was a brisk cool south easterly blowing and a few birds were about especially Meadow Pipits there were a few grounded, one doing its parachuting display flight and most going over more or less due north. 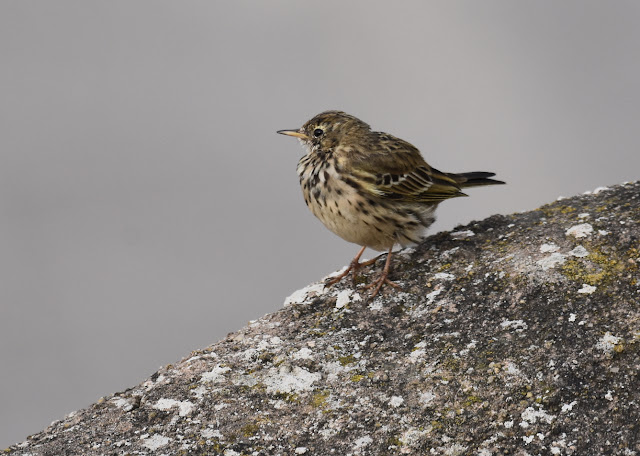 One of the local Pied Wagtails doesn't like the pipits landing on his  patch and chases them off calling noisily as he does. Great to watch the twisting and turning of the chase as the pipit tries to make an escape.
We named Chat Alley as it turns up chats like Wheatears in reasonable numbers each spring and autumn and occasionally Stonechats too. So far this year we've not come across a Wheatear and today was no exception and also the mean date we first see one along here. However there were a couple of Stonechats, a species we've not recorded along the cliffs for at least a couple of years so we were very pleased to see them 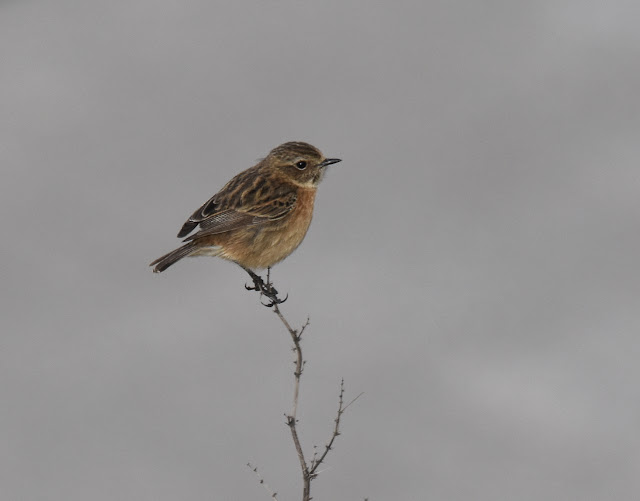 On closer inspection of the photos when we got back to Base Camp what we thought were two individuals now looks like the same one moving northwards along the cliffs. 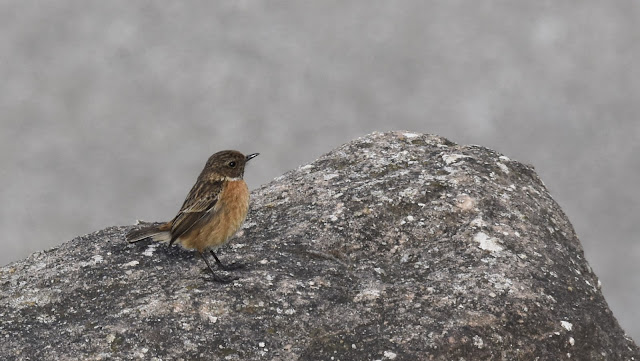 The return journey gave us yet more Meadow Pipits. 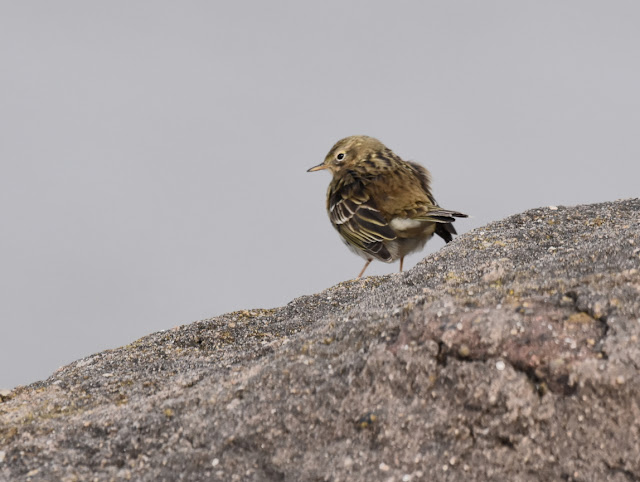 And finally we stopped off at the Go-Kart track wader roost and found the Purple Sandpiper still present as it had been there yesterday too - the first time we'd looked for it in a while with all the rough weather probably meaning the birds had had to roost elsewhere. 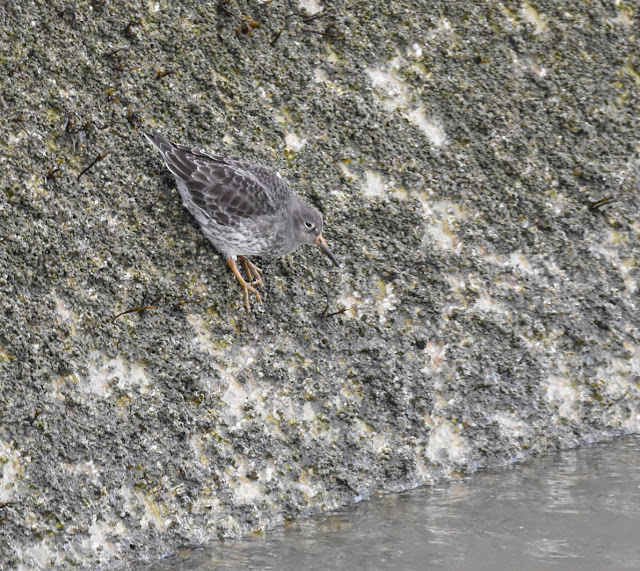 Well that's it for now. We'll try to be more regular in our posts now we.re forced to spend much more time at home.
Where to next? More of the mile from Base Camp we suppose
In the meantime lets us know who's reappeared in your outback

And don't forget the natural world is a great escape from the problems of today's issues and there's always something to see and new to learn right outside your door or even through your window if you can't get/aren't allowed out.