Well that's it then. We are in lock down for a month or two with no birding or ringing. Life must go on and luckily I have an archive of pictures and experiences to draw upon. In the garden there are Goldfinches without rings so I can do some ringing in the days ahead when the wind drops.
For now here’s a post with pictures from way back in 2009.
It was in November 2009 that Sue and I spent two weeks in Cyprus. Black Redstarts were absolutely everywhere and it proved impossible not to take lots of photographs of these welcome migrants from Europe. 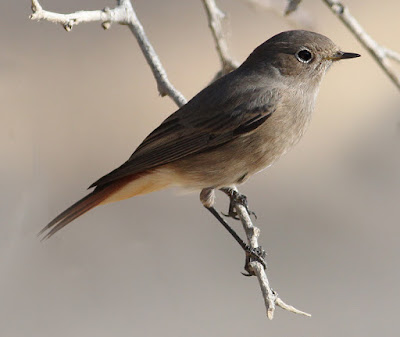 Black Redstart
For anyone who isn’t aware, the Black Redstart is a surprisingly scarce UK species and where the breeding population may be about 100 pairs only. Since about 1900 the UK population grew to include urban habitats that resembled their ancestral habitat of mountainous stony ground. Both during and after World War Two this included bombed areas, and then in subsequent years the species also colonised large industrial complexes that have the bare areas and cliff-like buildings it favours; in the UK, most of the small breeding population nowadays nests in industrialised areas. 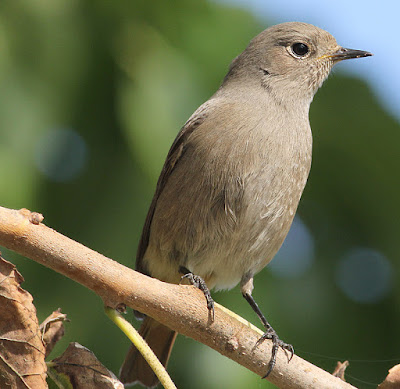 Black Redstart
Black Redstarts appeared very numerous in Cyprus, not entirely surprising as the species is a common winter visitor from October through to February. These birds are mainly of the European race Phoenicurus ochruros gibraltariensis which breeds in the bulk of Europe and east to Ukraine and Crimea. The area of the Mediterranean Sea is the main wintering area with a small number of birds as far south and east as Egypt and the Middle East. 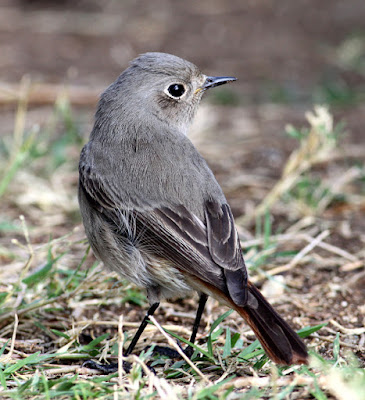 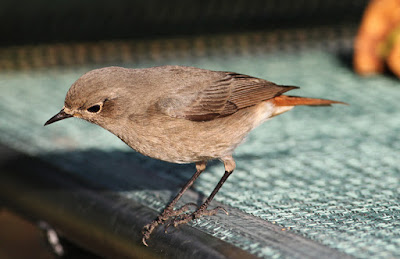 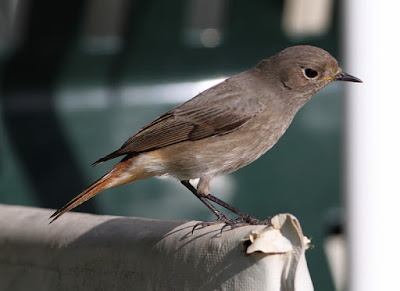 Black Redstart
Of course by November juveniles greatly outnumbered adults, and I thought that on most occasions I was watching a bird of the year. Additionally, from about August first year males have an almost identical appearance to the duller female, and the whitish wing panel of this western subspecies does not develop until the second year. In one or two photos there are the visible remains of a nestling’s yellow gape, and in the extended summers of parts of Europe this feature is perhaps to be expected in November. 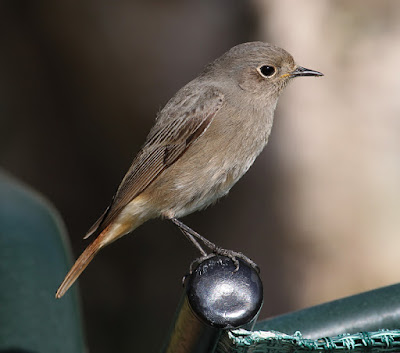 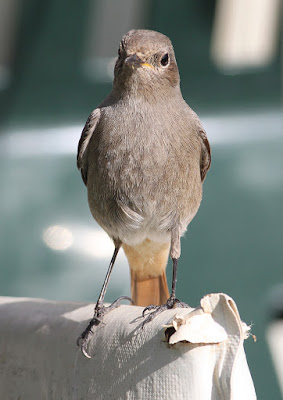 Black Redstart
Unfortunately, with one exception, a confiding hotel garden bird seen above, the redstarts weren’t too easy to approach, like almost every other bird species on this over-hunted, infamous island.
Back home in sunny Stalmine, this morning I went out to the shops for essentials, our local small shopkeepers, not the rip-off Co-op supermarket. Ten minutes from here at Knott End village is a wonderful array of shops; butcher, fishmonger, baker, cheese & delicatessen, fruit & veg.
As we all cope with the current disruption to everyday life there is one thing that all of us can do that will help - shop local, shop UK, with YouK.
Our society depends on farms, manufacturers, fishing boats, and UK businesses big and small. Without them there are no jobs, no income, no money for schools and hospitals.
Home deliveries of household essentials from small companies will help support them, take pressure off supermarkets, and support delivery workers. Breakfast cereal, soap, tea, shampoo, jam, wine, hand cream, meat, cleaning products, face moisturisers, there are UK companies covering all of these everywhere.
Pubs are closed - so let’s keep the brewing industry going so that things can start up quickly again with home delivery of UK craft beers - over 700 brewing companies across the UK. Most people will have many local options including ourselves with a local brewery, Farm Yard Ales along Gulf Lane, Cockerham - Farm Yard Ales.
We are powerful together – help UK business, keep our jobs, and let’s get through this.