Whilst the moors are fresh in my mind following a visit to Bowland last Friday. I learn of the fire brigade being called out yesterday to a moorland fire at Deer Hill Reservoir in West Yorkshire. 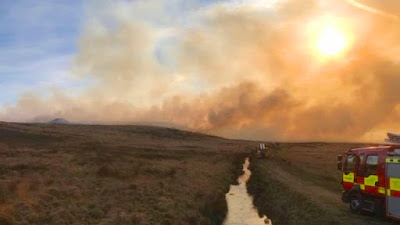 Photo West Yorkshire Fire & Rescue Service. Clik the pik
Thought to have been caused by an out of control 'controlled burn', the fire service is now calling for a ban on this practice of grouse moor heather burning. Fifteen crews with twenty appliances attended which had a mile long fire-front.
Of course there's a connection between these burns, the grit roads featured in my last post, and wildlife crime, including the attempts to eradicate the Hen Harrier. I encounter traps for other small fry on my often visits to the moors, which gets in the way of the industry, whose motto is....if it's wildlife get rid of it.
Apart from the fact heather burning is nothing more than vandalism on the moors and serves no other useful purpose, this burn is against the law, the legal dates for heather burns are 1 October - 15 April.
On 21 March 2007, I did a survey in the Clougha and Birk Bank area and found 23 Stonechat which were seen as 11 pair and a lone male. Four weeks later I went to do my April survey, to find a heather burn had taken place, borderline or more likely outside the permitted date in mid-April. The result was to find just 4 Stonechat, with the rest of the 9 pair driven from the area and certainly nests/eggs and possibly young destroyed.
The Great Bustard.
I wanted you to see this 'person' who I featured in a recent post, but made the mistake of pointing everyone in the direction of my side-bar where it soon got buried beneath new posts on Tweets by RBA with which there is absolutely no connection to my comments below. 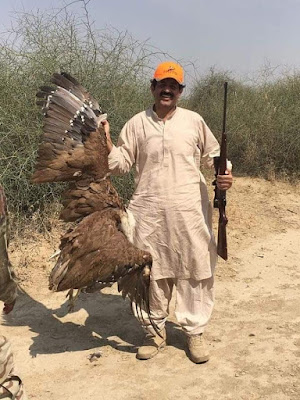 Here's the nice man in India who shot the Great Bustard, then stood with it hanging from it's wing, whilst he grinned his head off for a pik....BASTARD, he's a even bigger bastard if you Clik the pik.
I found a Peacock in our garden today, my first identifiable butterfly of 2020.