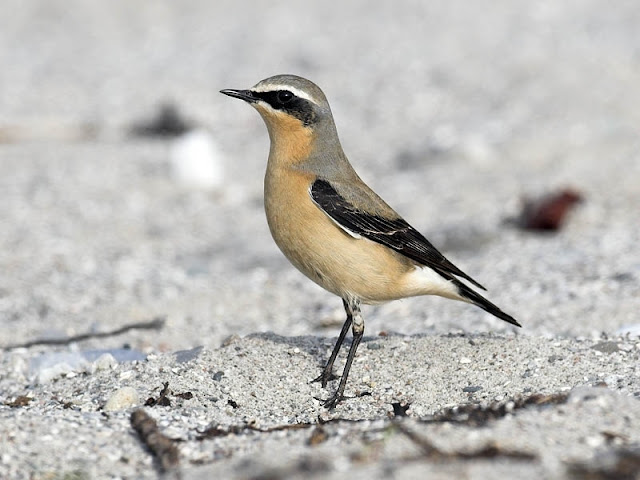 Northern Greenland Wheatear (Oenanthe o. leucorrhoa)
(Photo: Thanks to Manx Birds for kindly allowing me to use this photo
Note how upright stance 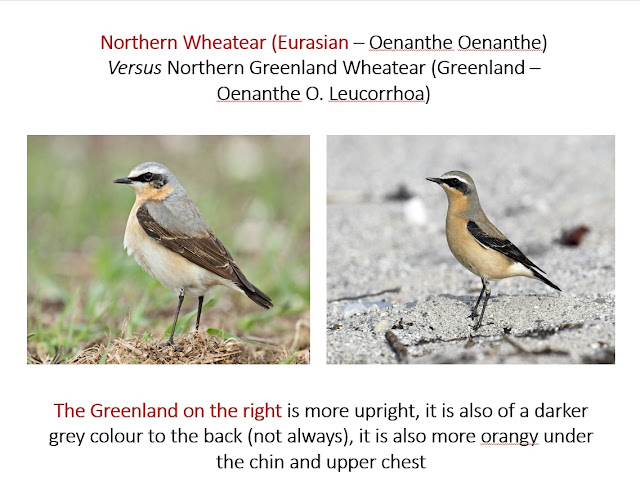 These birds are just something really special and must rank as one of the more determined of the long distance migration travellers, especially the sub-family "Leucorrhoa" (Northern Greenland Wheatear) which will have travelled all the way from the African savannas south of the Sahara to their breeding grounds in Iceland, Greenland, Faroe Islands. During their vast migration.  I have had the privilege to witness parties of them whilst both down in Lancashire and also more recently, here on my doorstep in Cumbria.

I have always be drawn to and loved the Wheatear (Oenanthe, oenanthe) right from my first viewing of it in the small pocket Observers book on Birds, and again by finding a special card from within the outer lining of the Brooke Bond Tea package. It's always held special and still does today.

When I lived back down in Haslingden, Lancs I would make my regular trips each year to go up on to the local moorland (Haslingden and Oswaldtwistle Moor) in search of Dotterel trips. It was usually from about mid - late April or even the first week in May. I would regular get the Dotterel stopping over on their way through to Scotland or Scandinavia, in fact the best count I had was back in the mid 80s when I had a trip of 32 birds.

The reason I mention here about the Dotterel is that on more than one particular year, I would get parties of Northern Greenland Wheatear accompanying the Dotterel or arriving at the same time as them, I think it was these particular experiences which actually brought the larger more upright and colourful Wheatear to my attention in the first place, and gave me my first understanding of the sub-family 'Leucorrhoa".  They always came in groups of maybe half a dozen or even as many as teens.  You would go up and see them quite close together, but the day after they would have separated with a lot more distance between them whilst they engaged in the spoils of small craneflies which always seem to be available at the time of the Wheatear's arrival. They would hang around for about 3 days at most gorging themselves before continuing on their onward journey.

Back in the 1980s whilst still living down in Haslingden, I witnessed about ten of them on the Haslingden and Oswaldtwistle Moors.  I also had a party of about 8 to the East side of the Ogden Reservoir - Musbury Heights corner. 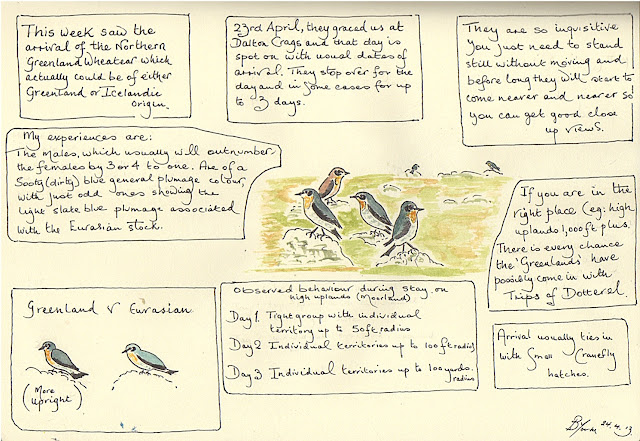 Greenland Wheatear (leucorrhoa)
Please click over sketch to enlarge
It is difficult without true science to be able to be confident to recognise the differences between the nominal race (Oenanthe, oenanthe) against the sub-family Oenanthe O. Leucorrhoa.  There are several pointers which give you clues and these I have already outlined in the information sketch above eg (sub-family Leucorrhoa) the birds are a little larger in size, they are more upright in their stance, they seem to have a much more colourful orange bib, the males can show a much darker blue, the dates of arrival will be as a rule from mid to late April and into early May, and they will be usually seen in collective groups.

They are a very nosy or inquisitive bird and I have noticed that if I can be patient and afford the time to hang about, then just stand still in the same position and the birds seem to gradually get closer and closer to you as though to sound you out!
I have found them in 3 different places around Hutton Roof with regularity, two of the sites are upland (700ft approx) and the other site is probably only at about 200ft.  They do say that they are regularly seen at coastal sites. 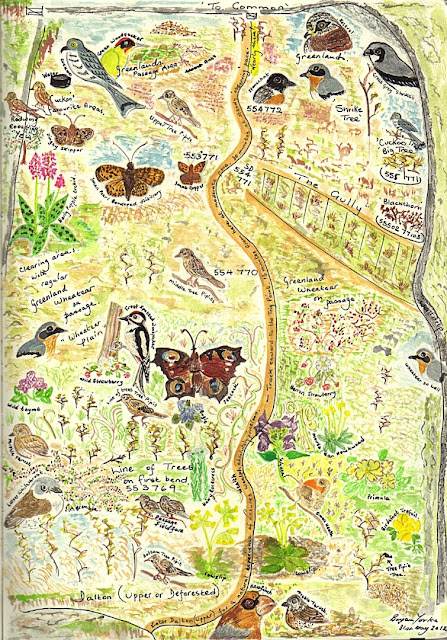 This is Dalton Crags (deforested)
It shows Wheatear Plain 1/2 way up and also the wall on the right
1) Dalton Crags (deforested) After walking up the main track towards the Trig point, and having just gone through into the upper deforested part of the Crags, about 1/2 way up on the left hand side is what I call Wheatear Plain just before the gully on the right hand side. They will usually be seen here or on the stone wall that borders to the right hand side.
2) Farleton Fell.  This is probably one of the more reliable sites. Having parked up to as near the summit of the Clawthorpe Road as possible at the area just before Whinn Yeates Farm, and just before you start to head down the other side to Lupton (Park up there).  From the large metal gate go on to the footpath here and follow the wall side on your right, you should see the wind turbine to your right hand side and as soon as you see the steep cliff on your left hand with the farm over the wall on your right, start looking there up to the top boulders that line the tops, and keep looking all the way along, and also as you leave the farm on the right hand start looking to the right hand as well they are often in the fields or walls.
3) Side of the Canal near to Holme Mills.  Heading from the Burton direction towards Holme, when you arrive to the area which is behind the Holme Mills and its duck active lodge, look immediately to your right hand side on the other side of the canal.  Its a large field which usually has horses in it. I have had large parties here and well spaced out.  See the map below. 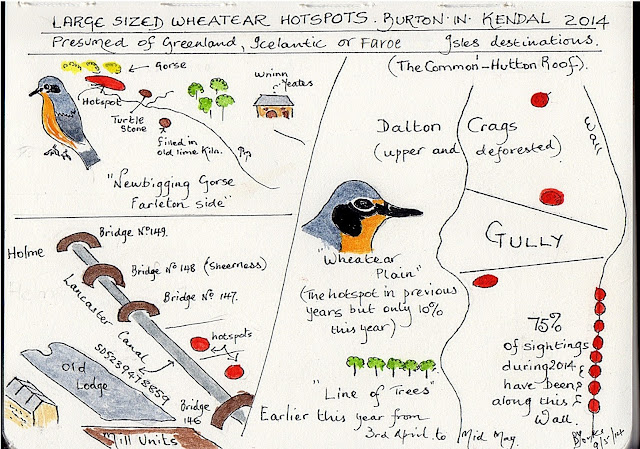 Sub family: Wheatear (O.o.leucorrhoa)
Shows the hotspots in and around Burton In Kendal

Taken from my blog of Sat April 22nd 2017 (Dalton Crags and Farleton Fell. (1100hrs to 1430hrs)
Today (Saturday)  Still no Garden Warblers and still the single Tree Pipit doing some fabulous displays whilst giving off his song.  Had three "Leucorrhoa" Wheatear with two on the walls and one on the ground on Wheatear Plain.  All very upright and all showing the dirty blue backs (presumed male). Stonechat male and female seen around the "line of trees" areas.  A Tawny Owl crossed my path and coming from South to Storth Wood - Dalton where I heard it calling from five minutes after passing.
Today (Saturday) - Farleton Side
I had Chiffchaffs calling from Farleton Rise, Rowley Copse, and 50 yards below Rowley Copse where I also had a Blackcap calling. On the Fell itself I had ten Wheatear of which 8 were presumed of the "Leucorrhoa race" and all were dirty blue coloured, these were spaced out along the full length of the fell and mainly in pairs.  I had a further two presumed to be O.Oenanthe - Eurasian which were a male and a brown female and thought to be breeding local.  Also several Swallows from the Whinn Yeates Farm, a single female Yellowhammer on territory. Views of a splendid "Lesser Whitethroat" was seen just above the Gorse areas.  The area were I have recorded them now for the past couple of years.

0900hrs-1200hrs.
A lovely suprise was to see a group of eight confirmed, but could have been more, "Northern Greenland Wheatear" which were half way up on the Dalton (upper/deforested). I was watching them for ages, absolutely beautiful plumages, more erect in stance as usual, and perhaps a little larger.
I remember in the 80s, it was always my cue to go and check out the Dotterel sites, because whenever I had parties of "Northern Wheatears", there where on most occasions, accompanied by Trips of Dotterel on passage, this was the case on the Haslingden/Oswaldtwistle Moors, dont know whether or not it happened on Pendle. I dont know whether the situation is the same up here in North Lancs/Cumbria, but can't see why not!!

Thursday April 25th 2013 (Dalton Crags deforested)
Nice to see the six "Greenland Wheatears" are still here (and they are the same ones which came in on Tuesday).  No idea where they where yesterday.  But definately the same birds, instantly recognized five males and one female, and the give away was the single male in very light colour much like our Eurasian birds plumage, but the top of his head and forehead was of a very light bright silver blue which stood out a mile, in fact this was quite noticeable on Tuesday last also.  They were there on my way up starting from the "Line of Trees"  and worked their way up past "The Gully" and as I walked up they kept going forward to the point where I last saw them at the "Shrike Tree" area.  I looked all around for them on my way back, around the Trig areas on the Common, the Crag House side but just could not find them again.