The Safari like a lot of folk has been mostly confined to barracks this week.We have been able to get out on Patch 1 for a short walk with the dog every morning but so far haven't taken the camera just the phone for any pics. We've seen a nice variety of wildlife like a small flock flock of migrating Jackdaws, a the female of a pair of Sparrowhawks narrowly missing catching a Wood Pigeon, a kettle of four soaring Buzzards, which is the same number as seen in total at the nearby Marton Mere NR between 1950 and 1991 - how much more common are they now persecution has almost stopped - and a Blackbird which looks to be nesting in the big Gorse bush in the middle of the field that is now smothered in bright yellow flowers - it's such a shame that thsi field will probably be built on before the end of the year.
So far we've only heard singles of Chiffchaff and Blackcap but we're sure we'll clap eyes on both of them before too long.
For vast majority of the time we've been poking around in the garden, taking snaps of the regular garden visitors doing their usual thing. 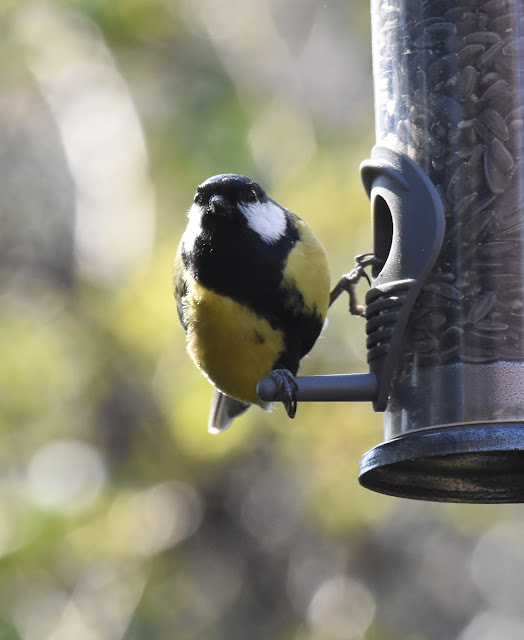 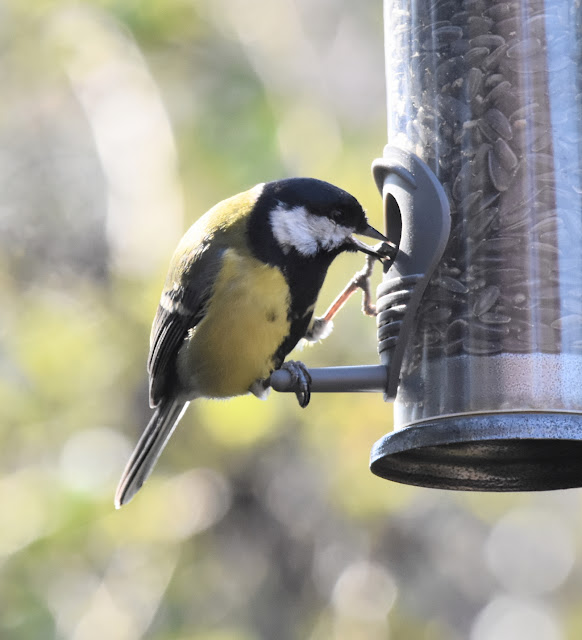 One regular visitor was seen doing something most unusual. Our resident female Blackbird was quite often seen perched in the Crab Apple tree pecking chunks off the suet block hung from one of its lower branches. On odd occasions it was able to perch on the feeder, this was seen when the suet block begin to get smaller and smaller. What we didn't expect was it to cling to the sunflower heart feeder once the suet block had been finished. In all our five decades of birding, feeding the birds in a variety of gardens and watching bird feeders in 101 locations throughout the land we've never seen this behaviour from a Blackbird before. We were lucky to get a pic as it's quite shy and flies away at the slightest hint of movement from either indoors or out. But it has been back to repeat the performance on at least one occasion.
Has anyone else seen a Blackbird (or any other of the typical thrushes) do this?
We've had some half decent sunshine and that has brought a few invertebrates out, mostly queen bumblebees - we've had a Tree Bee and a few Buff Tailed Bumblebees and a queen Common Wasp. A large 'colony' of the solitary Buffish Mining Bees (at least that's what we think they are) is on the street corner a few doors down where they burrow between the stones in a revetment banking and butterflies have so far been only represented by Peacocks.
The moth trap has been on all week but so far only one night has produced any moths and then just these two, a Common Quaker, the pale one, and a Hebrew Character (this is an old pic) 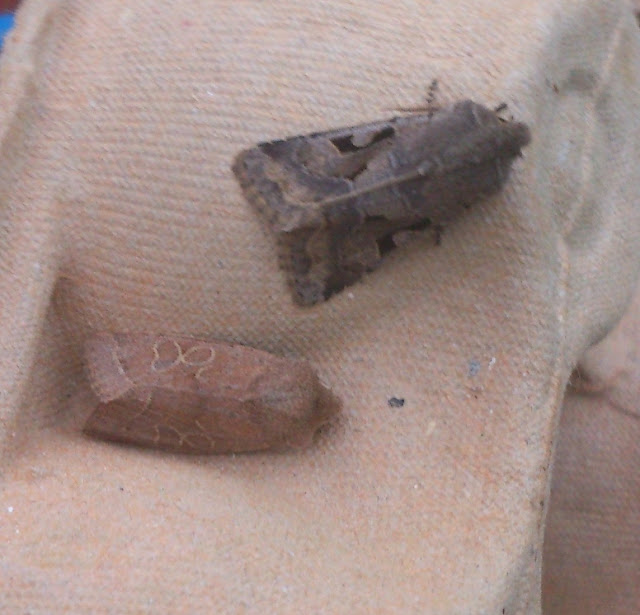 The only other news we have spotted an absolutely butchered Holly bush in the park in Patch 2 and to quote a senior arboriculturalist friend "Sack them - Pr*ck with saw alert!" or if it was done by volunteers some serious training is required. But the big question is why on earth do you need to chop a Holly bush in half in the first place. But then there's been some serious devastation to trees and shrubs in the park since we last visited at the beginning of the winter with some good trees having disappeared reduced to a pile of woodchip but again for reasons which seem inexplicable to us like an old gnarly Hawthorn and a standard Cotoneaster waterii that was full of berries among others. 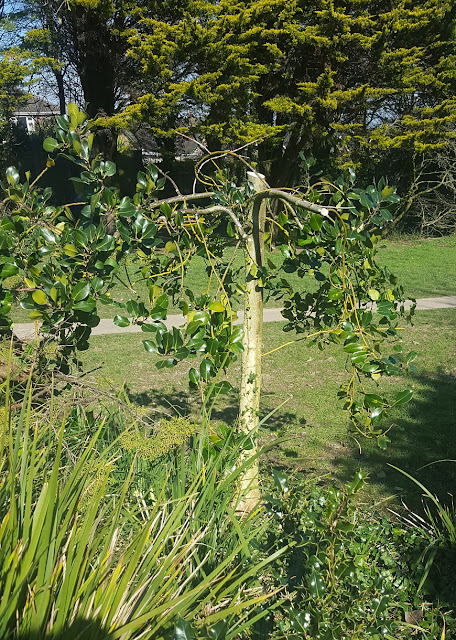 Some seem to have been taken out to open up the view to the huge pylons that carry the electricity cables across the Wyre and beyond to the huge organised wildlife crime scene that is the Forest of Bowland hills. Whatever the reasons it looks like they're trying to purge any and all wildlife from the park. We're just a bit gutted...and the little pond has been cleared so the Moorhens have vanished but the Typha will grow back so they will probably return in a year or two if the clear out doesn't become an annual thing, it is full of Frog spawn though, acres of the stuff and we're hopeful there'll be a Smooth Newt or two still lurking in there too.
Word on the street is that the Roe Deer is still in the vicinity, one of our dog walking friends reporting it second hand as being seen on the golf course across the road and another saying he disturbed it in the park at 05.00 taking his dogs out before going to work a few days ago...it wold be great to get a pic of this Roe Deer only a few hundred yards from our front door.
Where to next? For the coming week the weather has turned wintry cold again but we'll keep you posted with what we find on our early morning walk and any offerings from the garden.
In the meantime remember - Keep your distance, stay safe and don't forget there's loads of fantastic wildlife to enjoy and learn about right outside your door or through your window.