The Safari like everyone else has been stuck at home. We have been able to walk the mutt around the local fields early morning but haven't taken the camera as yet.
The days have been cold and windy but there has been some sunshine and in those sunny spells saw some Buzzard passage, we saw several but all too far away until the last one which came right over the garden not too high up. 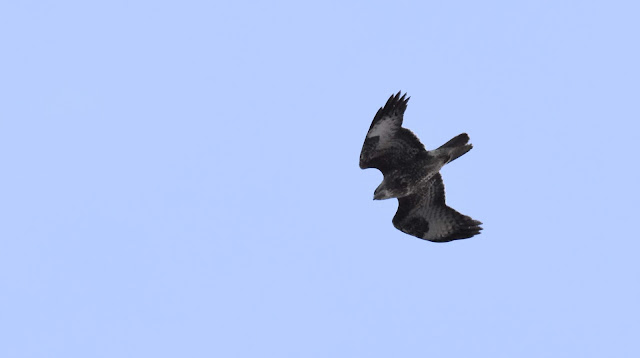 Overhead Buzzards we like but overhead Ospreys are better. So far everyone and his uncle around here seem to have had one or more, some people or soooo greedy, over their gardens except for CR and ourselves. We've got a hotline between us in case one ofr the other hears the gulls making a racket but so far no joy but there's still time...
The sunshine also brought out some invertebrates including our first 7-Spot Ladybird of the year. 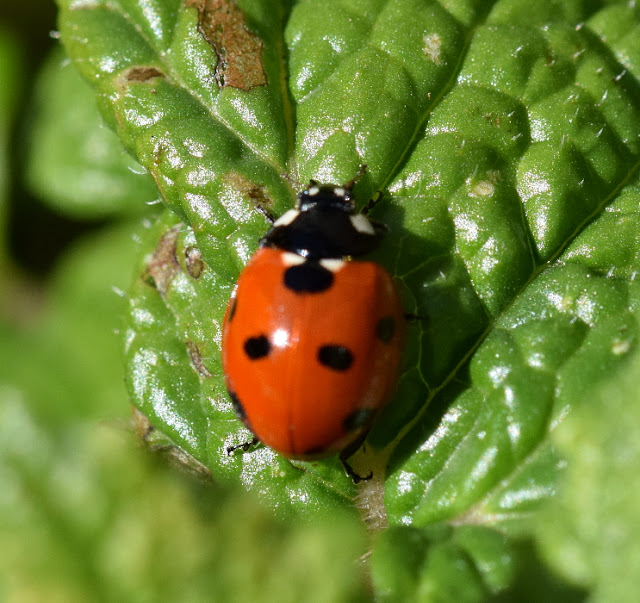 A check of the stealth-cam left out in the garden for 10 days gave us the hoped for Hedgehog. It appeared on several consecutive nights always around the same time - until the batteries died. Hopefully it'll have been recorded since we replaced the batteries but we won't know until we bring it in at the end of next week. In the meantime we'll try sneaking out to see if we can spot it for real. 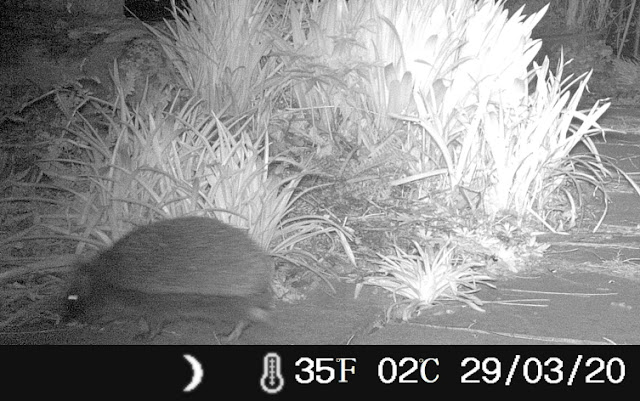 Our morning walk to the park to give the mutt a run passes a garden with a little wild patch tucked in the corner obscured from the other side by some shrubbery. A couple of Violets have appeared, not sure which species as we can't reach them to have a look at the rear of the flower and pick out the leaves from the other plants growing there. Nice to see all the same. 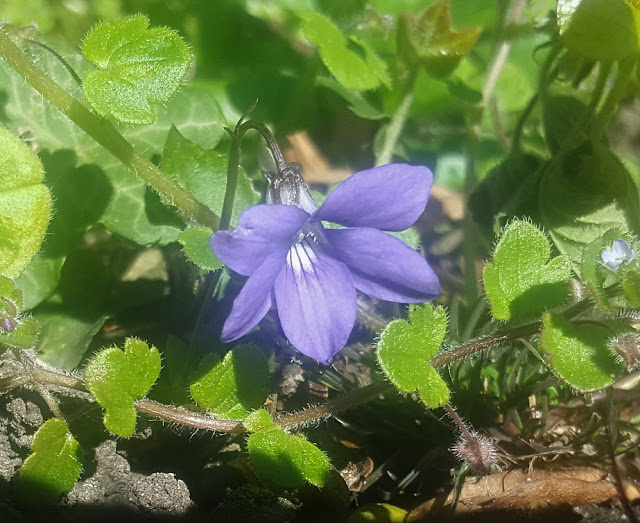 But mostly we have been confined to the garden and towards the end of the week the weather warmed up enough to bring out some more invertebrates and on Sunday there was an explosion in the number of Eristalis Drone Fly hoverflies, one, I presume a male, held a territory perched on the laundry drying on the washing line. From there it would make sorties after other Drone Flies chasing them relentlessly if another male or mating in flight if a female - An action packed half hour and fascinating to watch until the sun went in and they all disappeared. 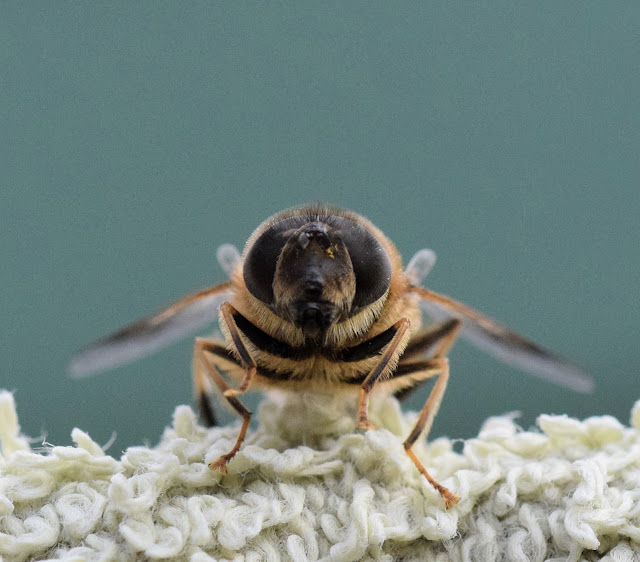 They weren't the only insects soaking up the rays. There were a few solitary bees about from the 'colony' in a neighbour's dry stone bank and a couple of these big black Flesh Flies. 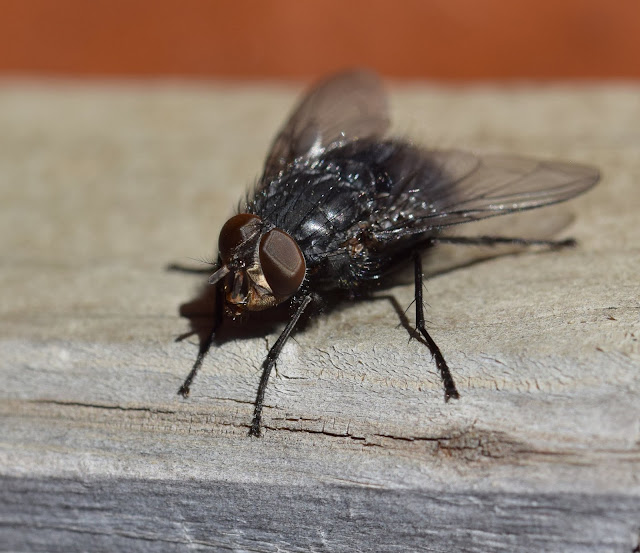 The feeders have been fairly busy but we've not had many photo opportunities. These Goldfinches had to be snapped while sitting at our desk at the far end of the living room from the window. 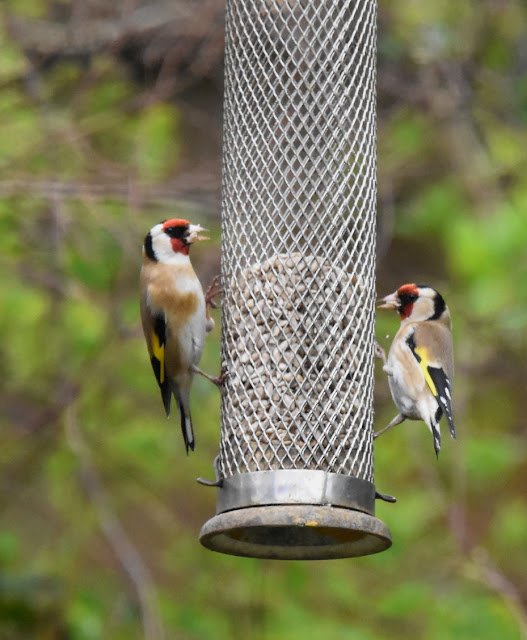 We've had the usual feeder suspects, Great and Blue Tits, the latter investigating our recently erected bird box but only from the outside so far as we know, not sure they're entirely convinced it's the 'Des Res' they're after just yet. A pair of Greenfinches are regular visitors several times a day and a Robin has a quick in an out a couple of times a day and we still have occasional visitors from the female Blackbird that thinks it's a Blue Tit but we've not been able to get a better pic than last week's.
Less welcome is this chap. 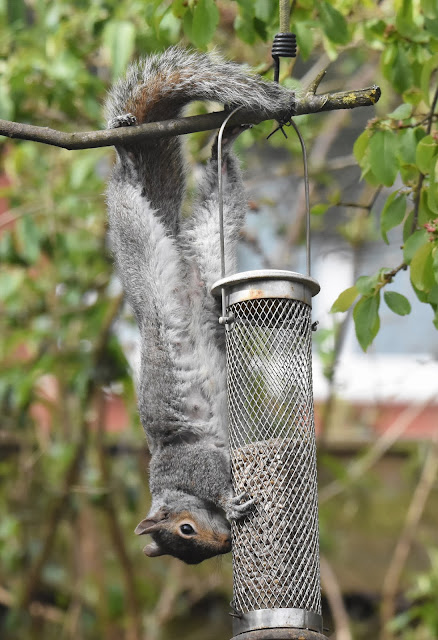 A trip to the shop was combined with a dog walk on the beach at low tide and after a bit of breezy weather we had a couple of interesting finds; our first Sea Gooseberry of the year, 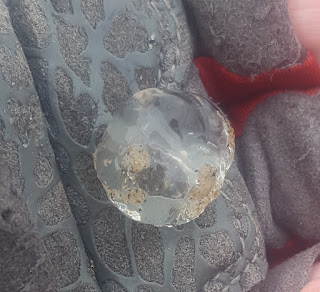 and a Wentle Trap Shell, these are pretty scarce along this section of beach, this is only the second we've found here in hundreds of hours wandering along the strandlines searching for anything a little out of the ordinary. 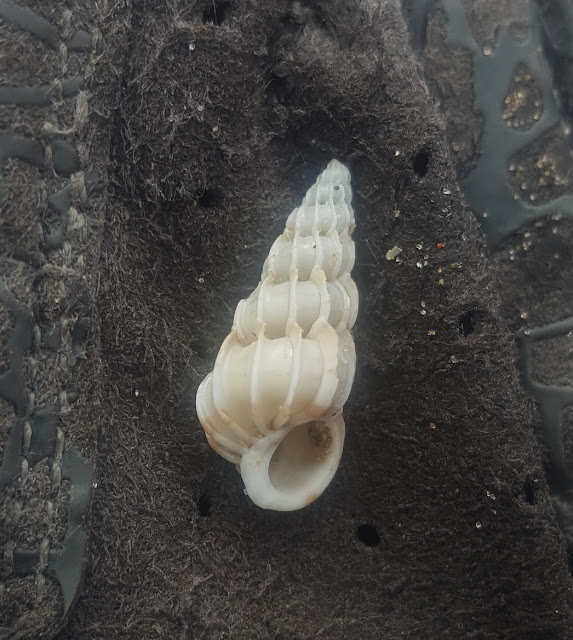 We'll leave you with Lord Snooty looking down his beak at us from his lofty perch atop next door's chimney pot.
Where to next? More of the locked down same from from the park, the occasional visit to the beach as shopping trips allow and loads from the garden we hope.
In the meantime let us know who's up and about in your locked down outback. Don't forget it's migration time and anything could appear anywhere so eyes to the skies folks - and wherever you are Stay Safe!