The Safari has had a rather productive week despite being on Lockdown. Last week ended on a high too with our first ever spring record of a Rook flying over Base Camp, they are very infrequent in the autumn, usually tagging along with flocks of Jackdaws on passage.
An early morning visit to the prom last Monday gave us a distant flock of Eiders heading south and the day got better still when a Chiffchaff dropped into the Base Camp garden staying a while to have a  little bathe in our ornamental waterfall. That gave us just enough time to grab the camera and fire off a few shots through the increasingly dirty kitchen window - time for the mop, bucket and Windowlene. Number 32 on our 1 mile from home challenge which was a two week challenge but has now been extended to six weeks - we get the impression it might be expanded even further yet too. 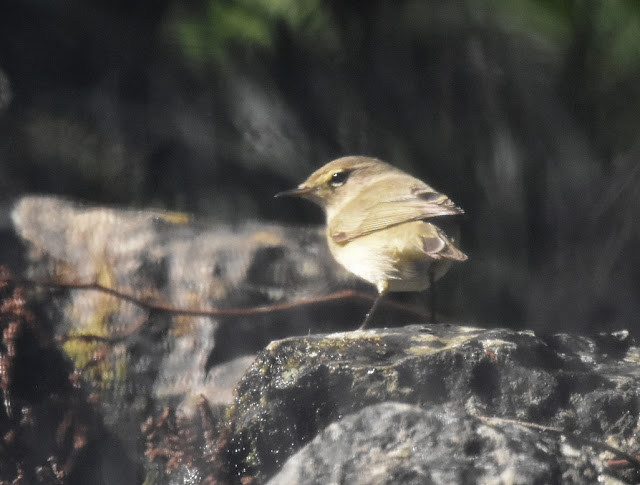 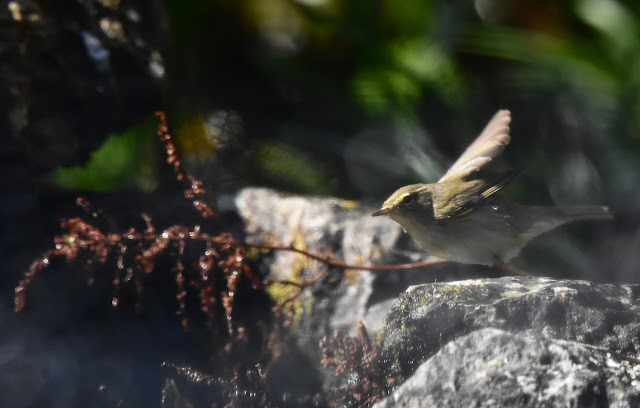 It wasn't the only bird having a spruce up that day, a Blackbird was in there too. 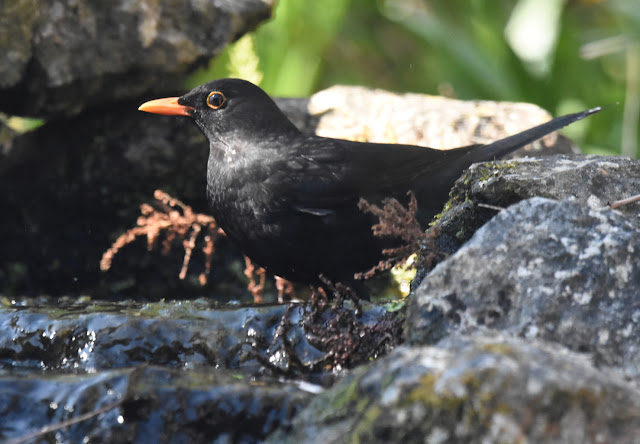 The following day we were back in the park this time we'd taken the camera to see if we could get a pic of the local House Sparrows that hang around the perimeter of the field where it backs on to the neighbouring gardens. Crikey it took some doing they were either very flighty not allowing any sort of close approach or keeping hidden in the dense Ivy or thick twiggery of the bushes. It took several circuits to finalyy get one submitted to the SD card for #33. 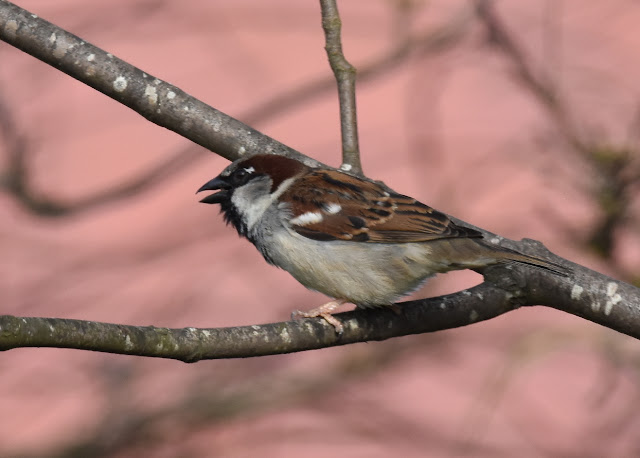 On a further lap of  the fields we heard a commotion of Sparrowhawk yikkering coming from the Butterfly Zone. We headed over that way to see what all the racket was about only to find the pair mating in one of the Sycamores at the edge of the scrub but requiring a very tricky shot through plenty of intervening branches and twigs. 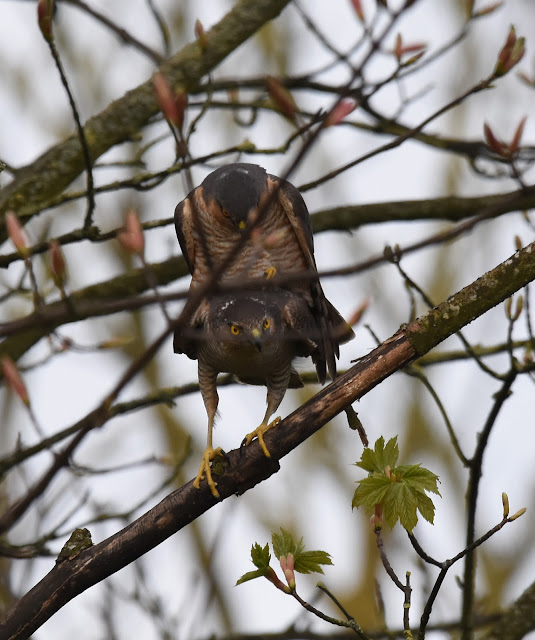 Never seen that before and very lucky to witness we guess.
Nearby Green Alkanet was flowering in a sunny glade 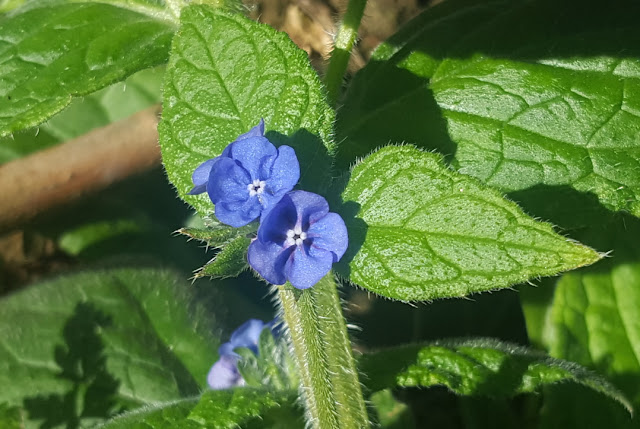 Bright sunshine, warm too, brought a Peacock to nectar on the Aubretias in the garden tubs. Our first and so far only butterfly pic this year. 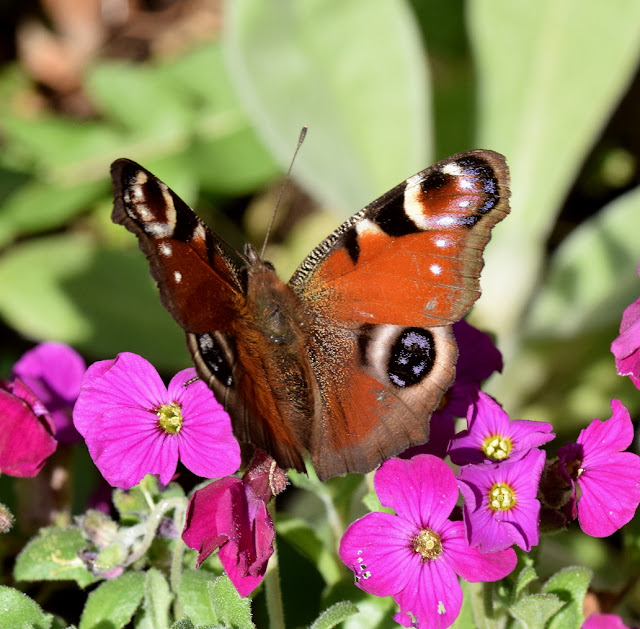 The fine weather got us to thinking about doing a bit of gardening so out came the stout gloves and secateurs and we ventured into the Bramble-infested no-man's land behind the garage. Now Brambles aren't that bad and provide habitat and food for a humungous number of invertebrate species but in a very small garden it's easy to have too much of a good thing. While doing a bit of snipping we heard the gulls go up in alarm and looking up we saw about a dozen of them chasing an Osprey almost directly over our head, tantalisingly close to being a Garden Tick but at least we'd joined the Osprey-from-the-garden-during-Lockdown club. We dropped the secateurs and tried to remove our gloves as we sprinted back down to the kitchen where the camera lay waiting. Too late - by the time we'd grabbed it the Osprey as nowhere to be seen, obscured by all the neighbouring houses. We called CR but sadly he missed ti too. There's a moral here - if you go up to the furthest reaches of the garden take the flippin camera with you!!! A Blackcap was singing very close to Base Camp much of the day too but never ventured in to the garden.
That takes us to Thursday. Leaving Base Camp for the early morning quick dog walk we had a skein of about 90 Pink Footed Geese fly over us. Later, on the proper exercise/dog walk we heard or first  Coal Tit for a long time, singing away in the line of tall conifers by the water tower and further on in the park the Chiffchaff and Blackcap now seemed to be settled in the Butterfly Zone which incidentally is so far devoid of butterflies.
Base Camp's moth trap has been dire, a combination of the Super Moon, neighbouring high intensity security lights and severe local habitat destruction aka garden tidying has butchered the local moth populations. A tatty Hebrew Character was a welcome find but we're getting to the stage of How many kilowatt hours per moth!
Good Friday was a good day on the prom early morning, out on the beach we came across a Green Leaf worm in a little puddle, not something you see ervyday and it soon buried itself in the soft sand. A few yards further on a recently deceased Lesser Spotted Catshark lay on the beach. Probably a victim of the anglers that are still out angling abeit in much smaller numbers than usual.

When we got up to the top of the cliffs at the furtheest point of our walk there was a bit of passage going on. We counted at least 35 Meadow Pipits and 21 Linnets going northwards, five Pink Footed Geese heading NW out to sea, got our first Swallow of the year, quite late we've ususally come across one in the earliest days of April rather than into the second week and a Blackbird was singing from a promenade rooftop - most unusual, the first we've heard along here in several years of 'treading the beat'.
Back at Base Camp several Nomad Bees were flying around and a Sparrowhawk soaring away to the north got the gulls going and our pulse racing again.
Easter Saturday started well with 50 Pink Footed Geese going north and a few minutes later we heard our first Willow Warbler of the year, which, like the Swallow, was quite late for us. We heard the conifer Coal Tit singing again and followed it up with a second this time in the big conifers in the park.
Most unexpected, although at migration time birders should always expect the unexpected, a pair of Shelducks flew towards the sea just east of the park - a Patch Tick!
In the garden a female Light Brown Apple Moth graced the trap and up to four Greenfinches graced the feeders. 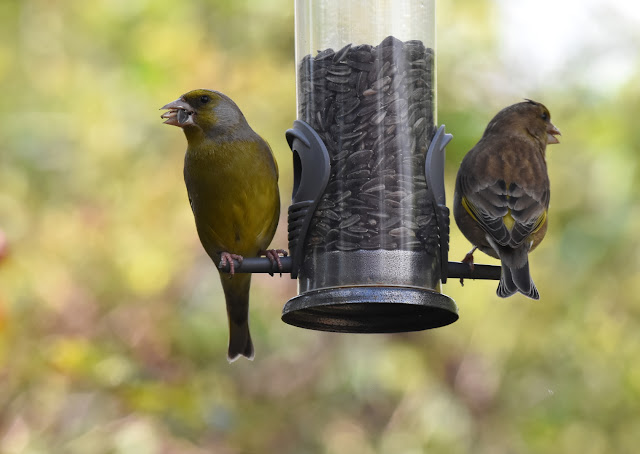 Best sighting of the day was a female Orange Tip butterfly, really scarce here, flying through the gardens just round the corner on our very quick lunchtime dog-pee walk. In the afternoon another good sighting was had, a Red Mason Bee, a new species for the garden, was discovered when we ventured behind the garage to bash some Bramble again. 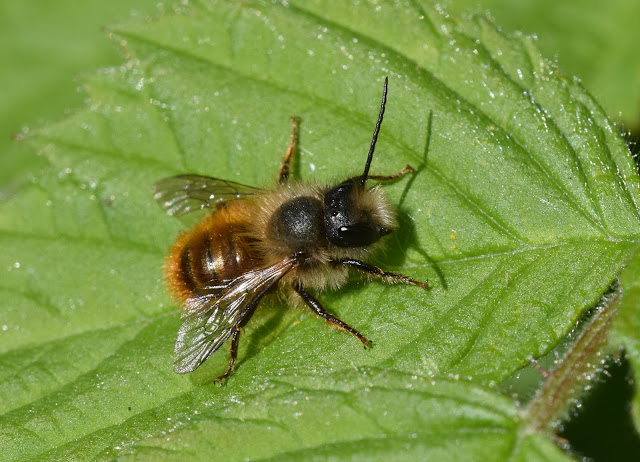 A Common Quaker and a large Crane Fly were in the moth trap on Easter Sunday. 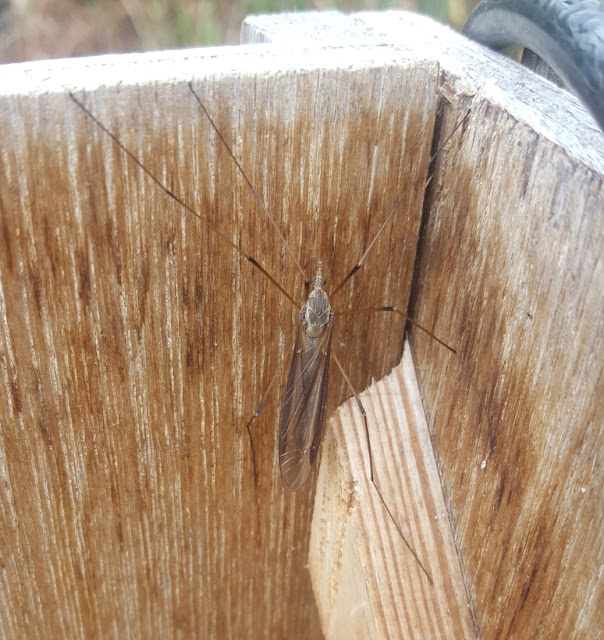 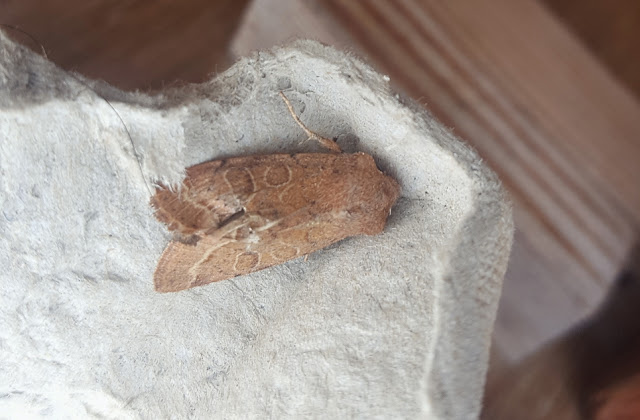 And a review of the stealth-cam revealed the Hedgehog is still about if only an occasional visitor this week. we've repositioned the camera to see if we can get a better view of him for next time.
In other news the sunny week has given us lots of invertebrate photo opportunities at Base Camp - here's a selection of what we've seen. 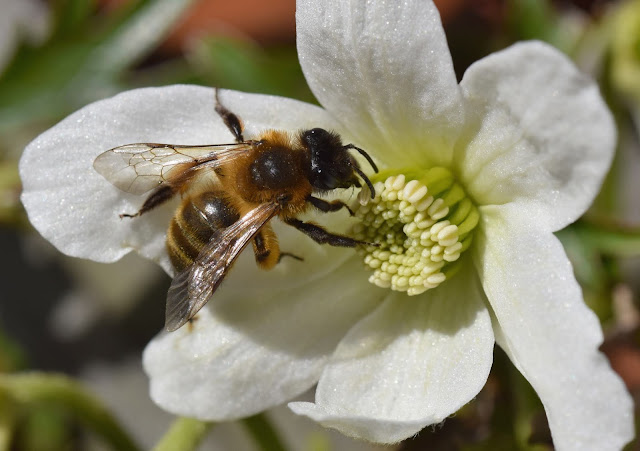 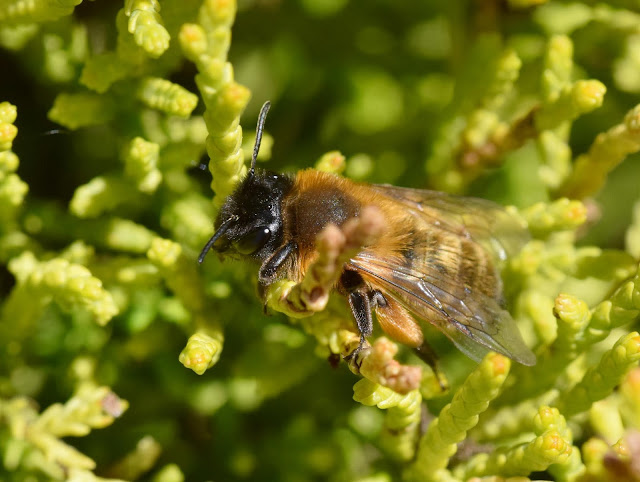 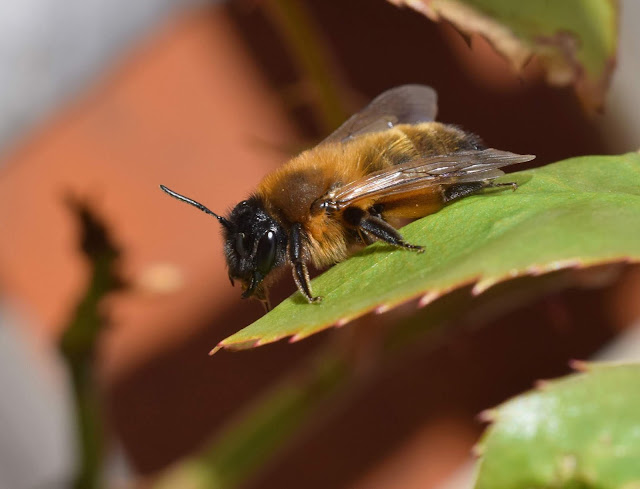 Several Eristalis Drone Flies take up positions around the garden. We've not had a proper look at them but guess they'll be E. pertinax. 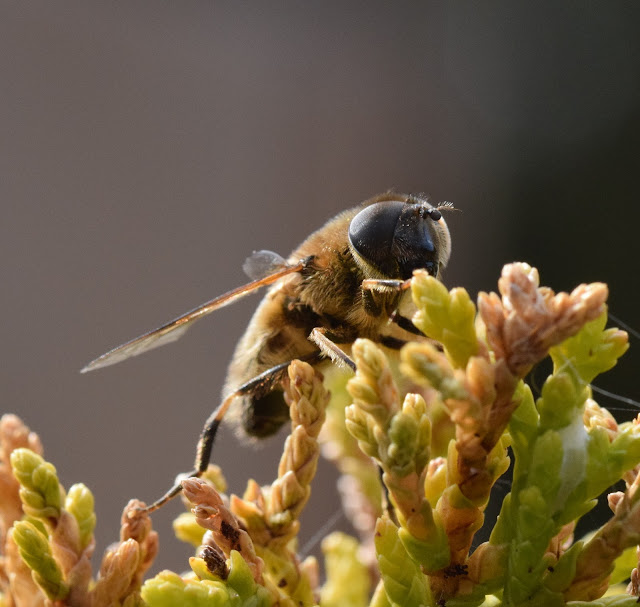 Some of our plant pots have more moss than plant! 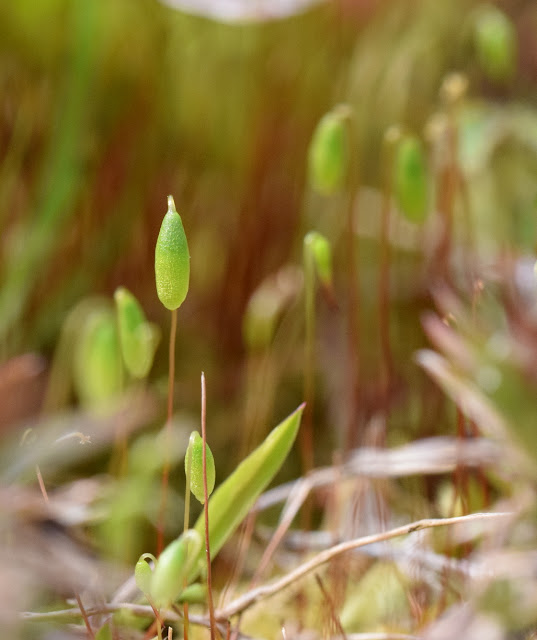 In the latter half of the week Gooden's Nomad Bees became regular visitors but they're a nightmare to photograph as they just won't settle for more than the briefest moment - here's a few of the hundreds of pics we've tried to take of them. 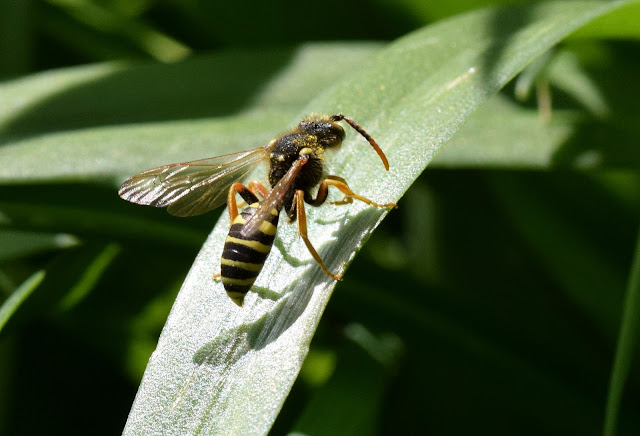 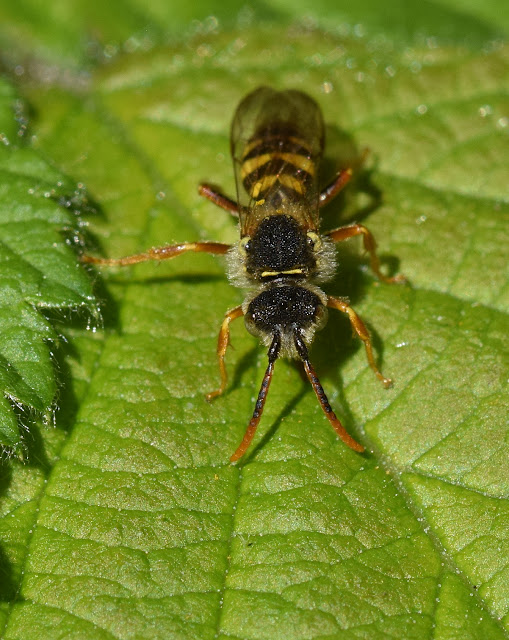 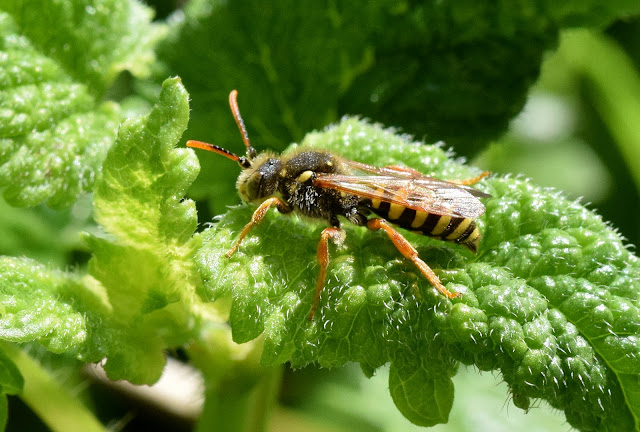 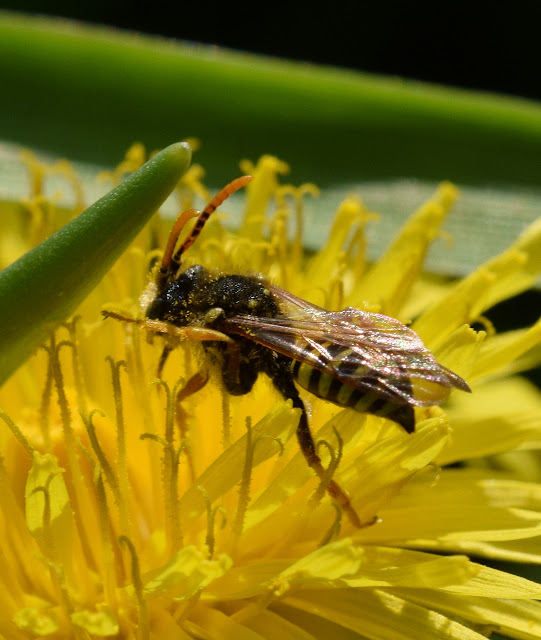 Another good find in the 'Bee-line' was this Tawny Mining Bee sunning itself on the fence, a rare find in the garden. 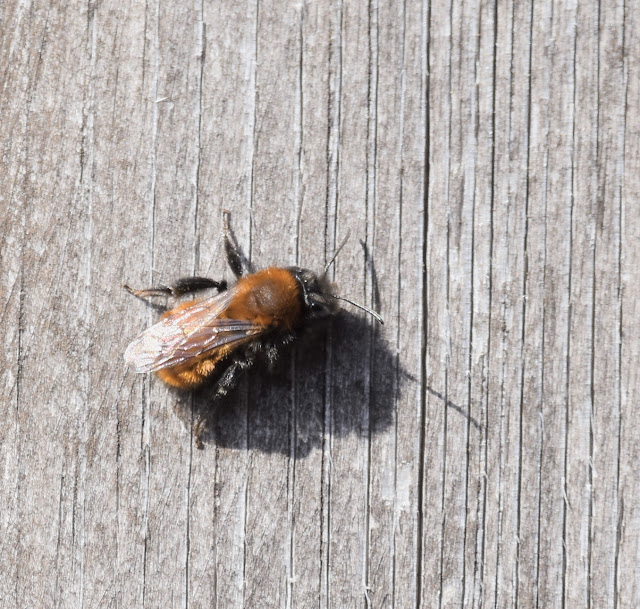 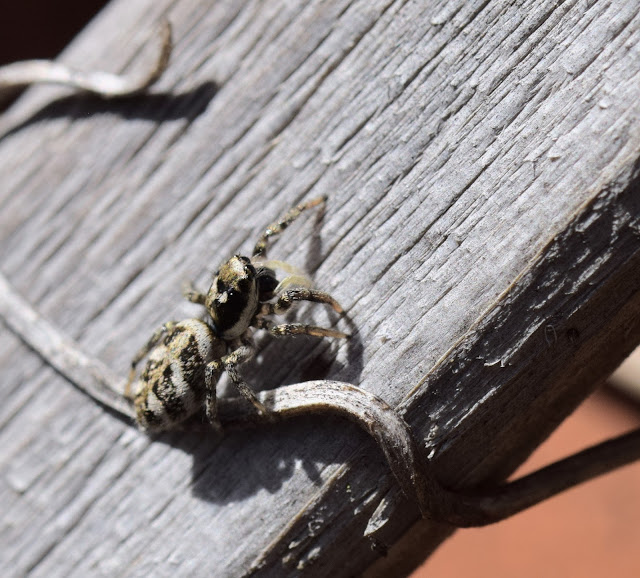 we spotted this tiny Hoverfly flitting around the flowers by our knee - no idea which species, one of the Sphaerophorias perhaps. 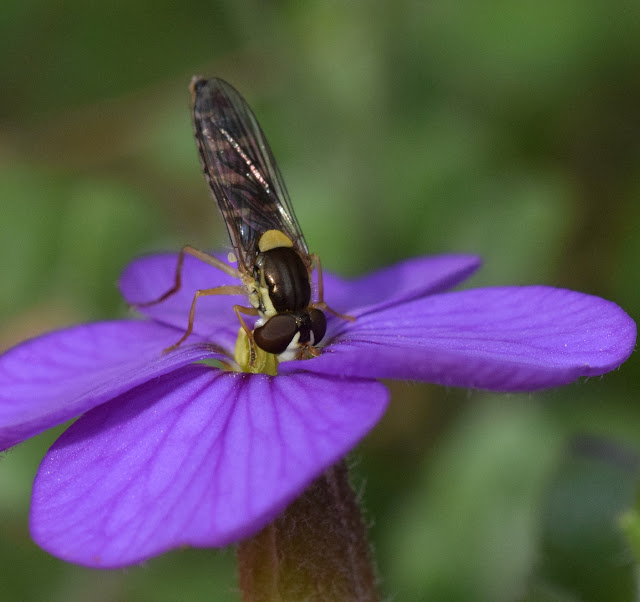 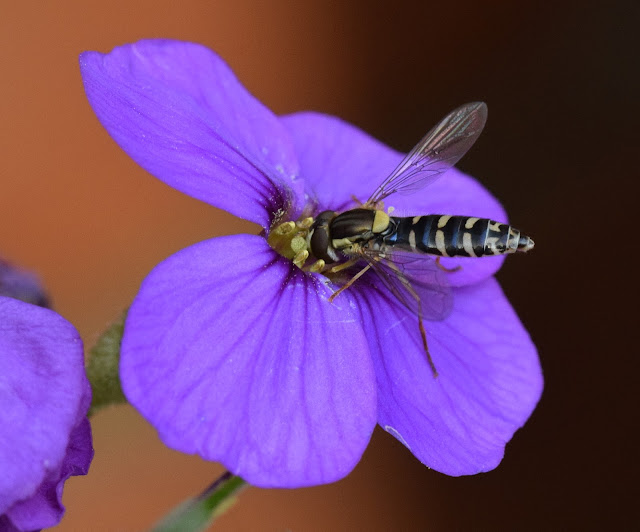 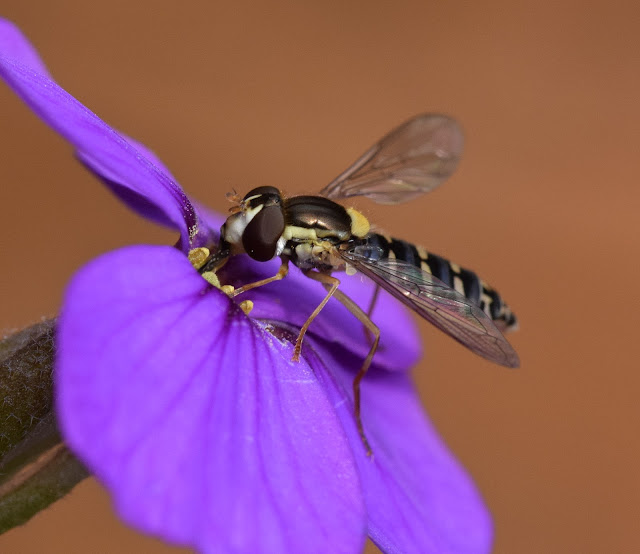 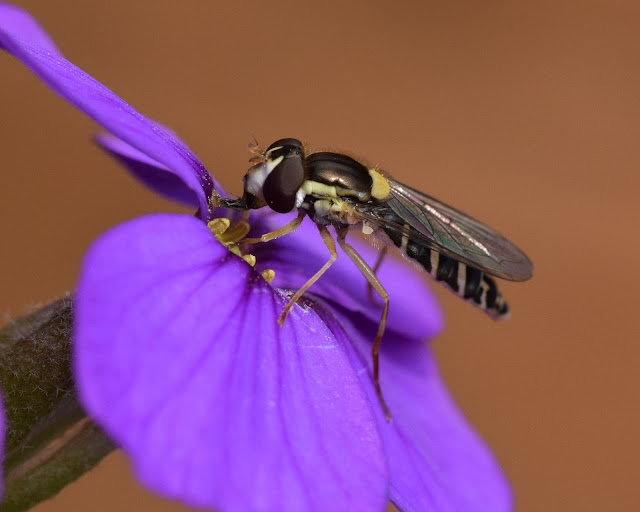 Where to next? More of the same - here's hoping the weather stays fine for daily Base Camp safaris and there's still the opportunity to take the dog for his walks round the park and occasional visits to the beach which he loves.
In the meantime let us know what's in your very much restricted outback. Stay Safe - Keep your distance!!!