The Safari has been enjoying the sunshine but not the strong, cold wind but at least it's an easterly which means the sea is mostly calm and there's a good chance for finding a decent migrant bird or two, either on one of our exercise/dog walk patches or flying over the garden. and then at this time of year there's always new common migrant birds to look out for too.
The week started cold and windy with absolutely nothing to report from the garden!
Tuesday saw us out on the beach - loads of room to be socially distanced out there, only three or four other people in at least three square miles of sand as far as the eye could see. Of initial interst at the bottom of the steps was the Loch Ness Monster, not sure how that managed to swim here given the restrictions on movements. 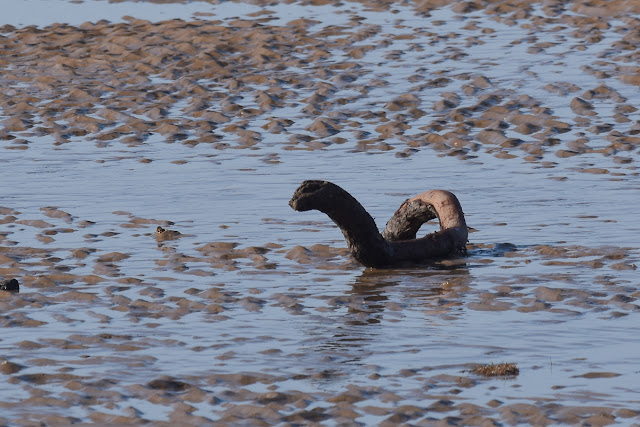 Not great lot else out there but the nice light meant we could have a go at snapping some of the regular gulls that hang out on the beach.
A flock of Sanderlings was a nice bonus for our Lockdown 1 mile photo challenge, shame we didn't nail the focus!

Back at Base Camp there was a little bit of a raptor fest when Buzzard then a little later a Sparrowhawk went over. 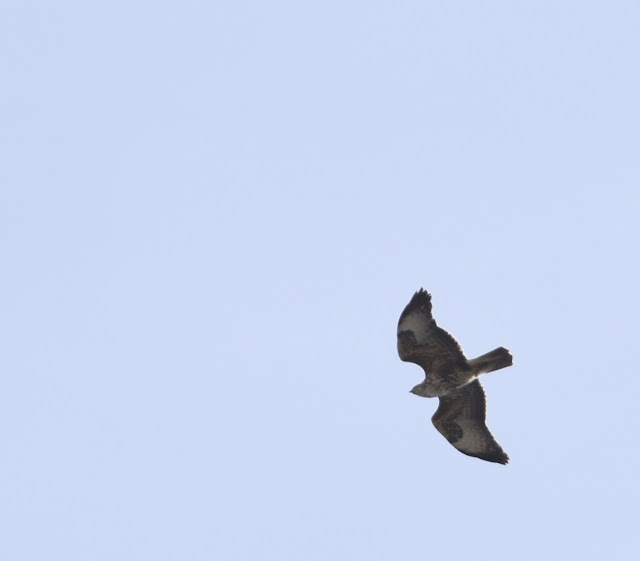 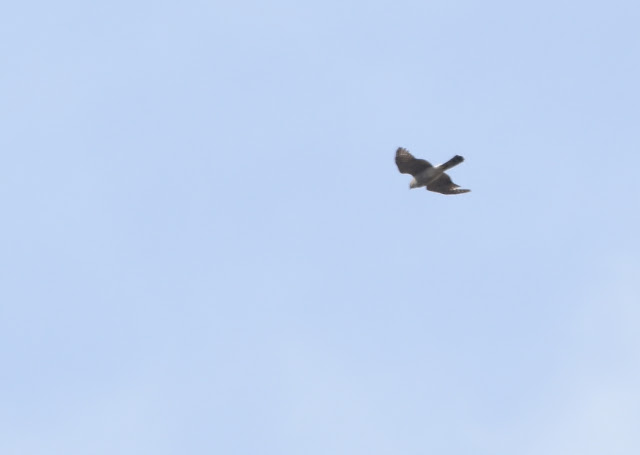 There was little by way of invertebrate activity at Base Camp either , easily best of the day was this (assumed) Tenthredo sp Sawfly, sort of similar to the Figwort Sawfly (Tenthredo scrophulariae). Not the best pic as it was obscured deep in the vegetation in our tubs and wouldn't keep still for more than a millisecond. 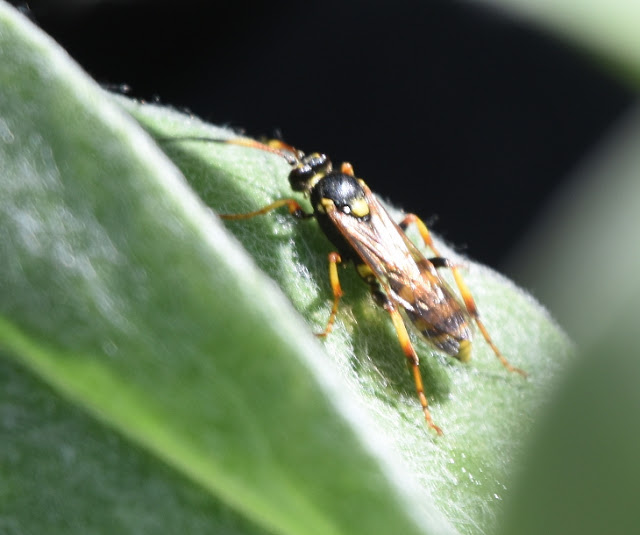 We were back on the deserted beach again on Wednesday morning and again took the opportunity to fire of some shots at the gulls.

A bonus was a drake Eider sitting quietly on the flat calm sea. It was quite a way out but was looking resplendent in the morning sunshine even at that range. Another one for our Lockdown 1 mile challenge.

Sandwich Terns were out there too, we were alerted to them by thir rasping calls and looking round had just enough time to swing the camera upo and get a pic of this one leaving the water with a small fish. 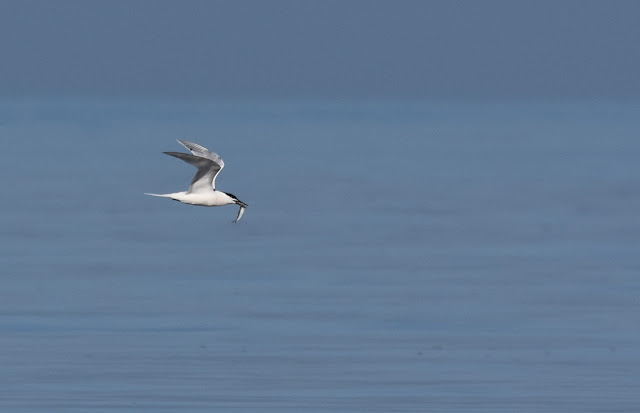 A few came a bit closer further up the beach 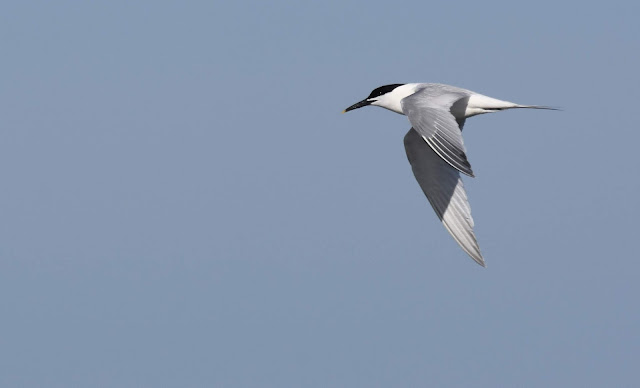 A flock of Shelducks also went past us within camera range. 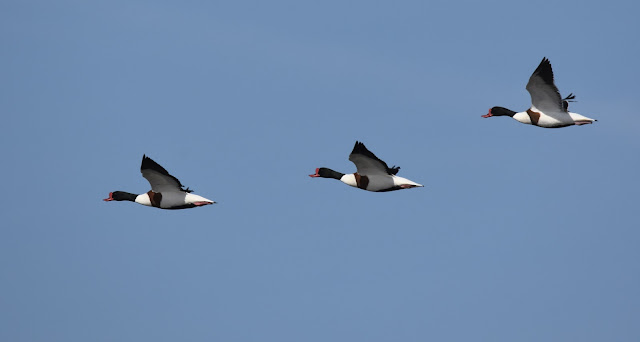 Sadly back at Base Camp there was nothing to report from the garden all day.
Thursday started well, the moth trap was out again and scored a hit in the form o f a single solitary, lone Hebrew Character - it might not have been a record breaking catch but it was very welcome none-the-less.
After breakfast we were back on the beach and once again we were enjoying glorious sunshine. Fewer gulls today but this crisp adult Lesser Black-Back took our fancy. 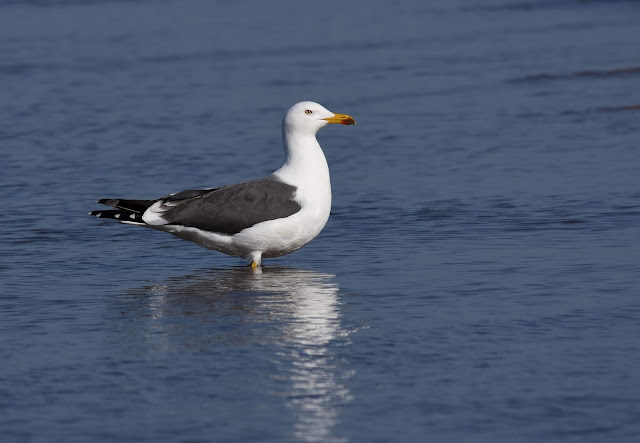 Up on the top of the cliffs a little later there was a bit of Meadow Pipit movement going on with a few other species thrown in for good measure bit this Pied Wagtail could be one of the local breeders. 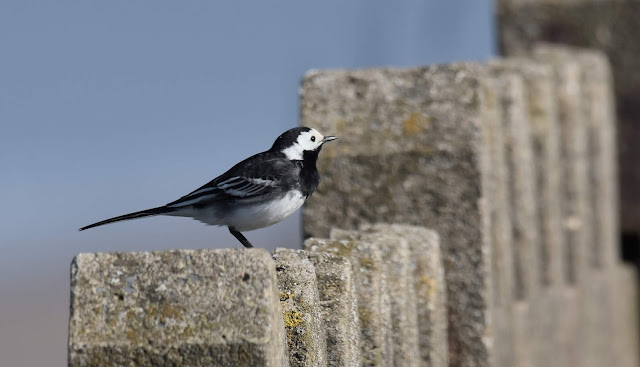 A minute or two later a quick movement caught our eye. A small bird, obviously a warbler of some sort was making flycatching sorties off the top of the fence. Cautiously we approached and we thought that's nice a Willow Warbler, which was a first record for us along Chat Alley so we got some shots off.
But when it flew in to the shadows down the cliff it then looked rather Chiffchaffy. 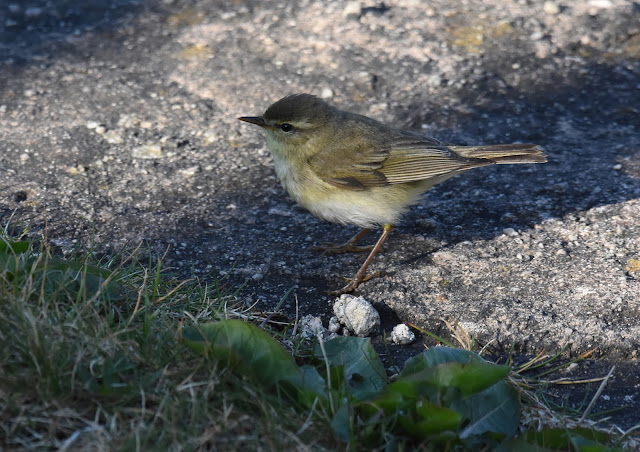 We couldn't decide which it might be so we put the pics out on the old social mediums. Interestingly the majority of respondents on Twitter went for Chiffchaff while the majority of those on Faceache plumbed for Willow Warbler - so that worked out well then! Hmm - we're still erring on the side of Willow Warbler - Thoughts anyone?
Easier to identify at the end of our walk was this stunning male Wheatear. 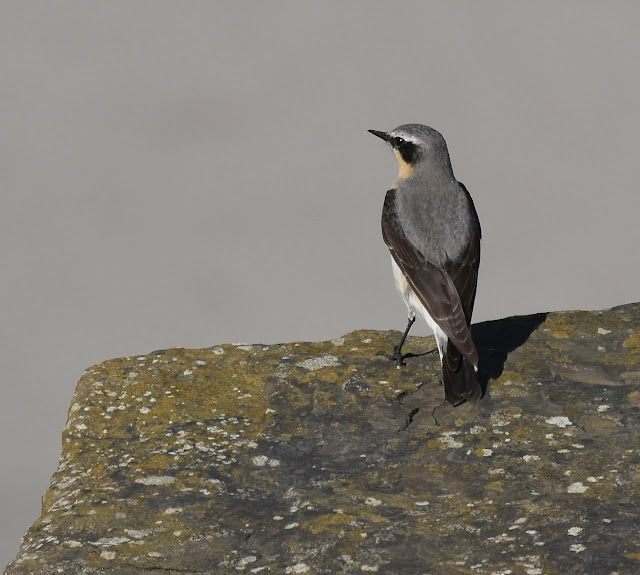 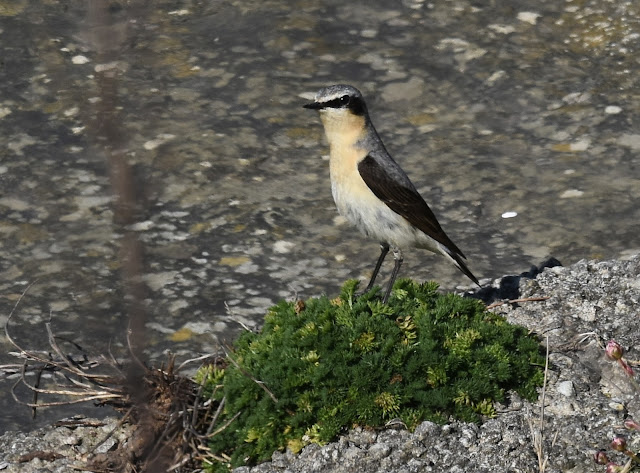 It was much better in the garden too as we had a few more invertebrates to enjoy. Along with the regular Drone Flies this chunky bright hoverfly was lurking in the shrubs behind the garage. 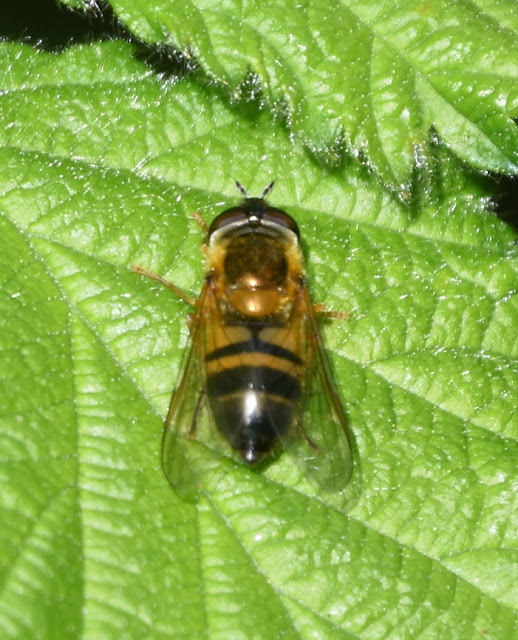 A brief visit by this Small White was the first of the year in the garden. 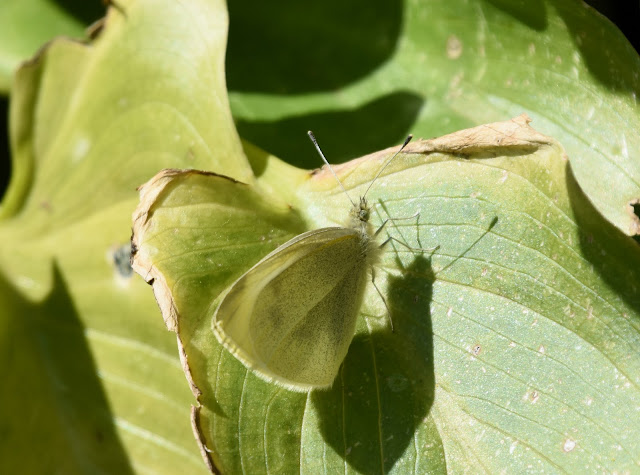 If it's warm enough we do get fairly frequent visits from queen Tree Bees. This one was rescued from the sitting room floor and put outside on the Aubretia flowers where it took a few minutes to come round and start drinking some nectar. 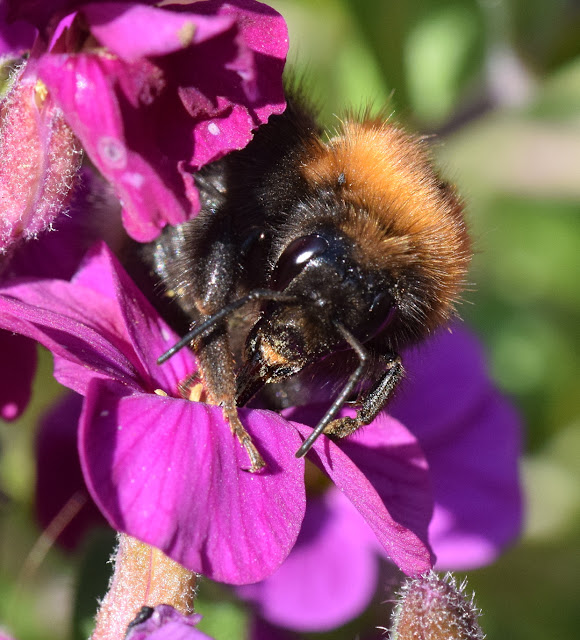 Less welcome was a huge queen Wasp which fortunately took itself off in to the distance over the garage roof.
Bird-wise we had a fly-over Meadow Pipit - Big Wow!!! But there haven't been many over Base Camp so far this spring. Then we got an excited call from CR telling us another Osprey was coming our way and he'd just got some pics of it over his garden. As he was speaking he called out a Sparrowhawk also heading our way whcich did come over us unlike the Osprey which didn't unfortunately.
With very cold temperatures forecast the moth trap wasn't set up on Thursday night. So it was off to the prom for walkies again after breakfast. A joyous sight met us as soon as we arrived in the form of the pair of Swallows that nested in the garden of one of the houses along the prom were back. 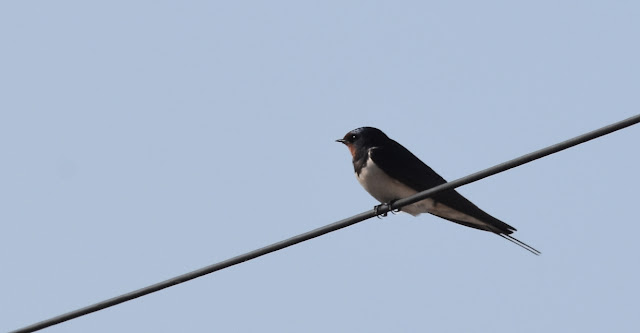 It was very calm for a change, so calm the sea was struggling to reach the shore. 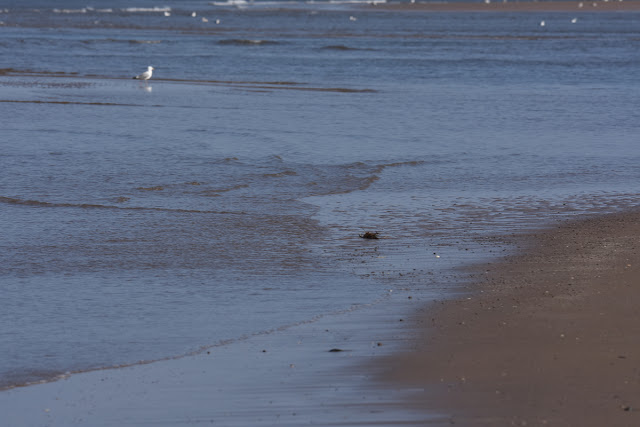 At this time of year the last few flocks of Pink Footed Geese should be flying north west out to sea in the general direction of Iceland, these three were gong in the opposite direction, south east!

The garden held a bonus, our first record of Red Mason Bee. It was checking out our bee hotel too, so fingers crossed. 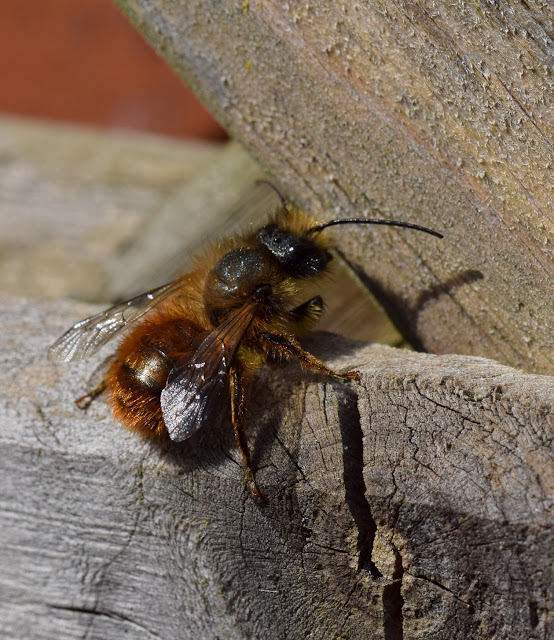 The moth trap was empty again on Saturday morning, so far this year mothing has been a dead loss and we really hope it picks up soon.
Down at the coast we had our first Gannets of the year. A long way off shore but great to see. Hopefully there'll be some nearer ones before too long.

Over the past few days we've been putting out some of Monty's moulted dog hair and today was the day it was discovered, first by a Blue Tit 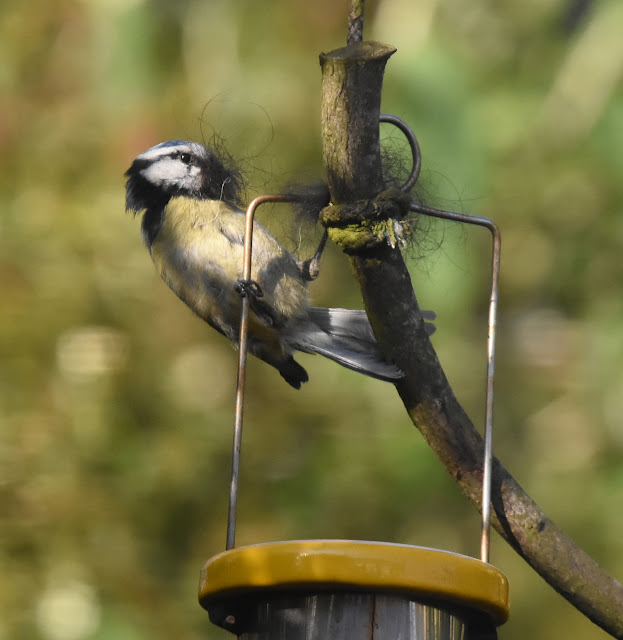 And then the local Great Tit pair come in for the left overs. 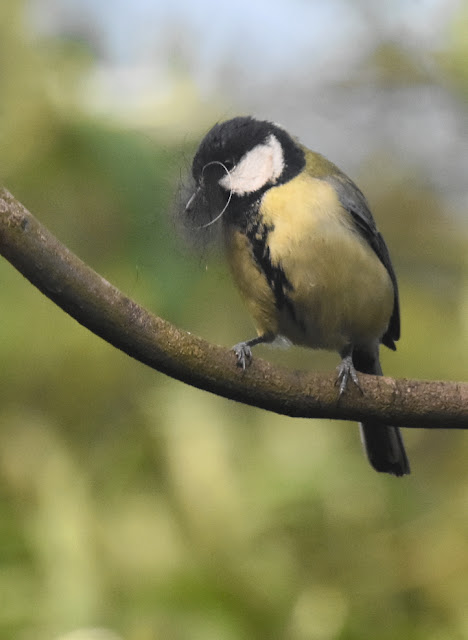 Nothing insecty in the garden in the cold wind despite the pleasant sunshine.
Yet again there were no moths in the trap, it's quite worrying even though we know the strong wind and cold temperatures are very much to blame.
Back at the prom we did get a closer Gannet but muffed up the shot and what's that grey thing below it? Have we missed some blubber, a Grey Seal maybe? 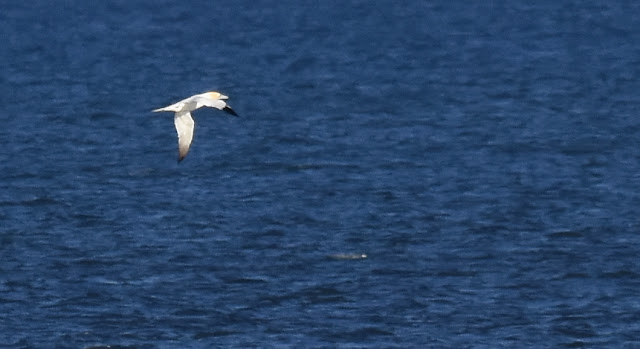 A Little Egret going south at eye level was a nice surprise and a bonus bird for our 1 mile challenge. Our tally now stands at 40. 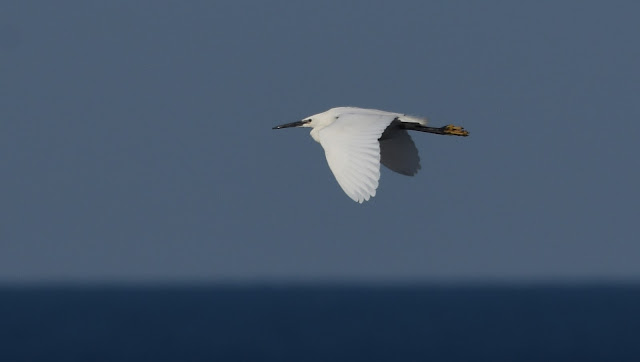 unlike the last Pink Footed Geese this skein was heading out in the right direction - Iceland here we come. 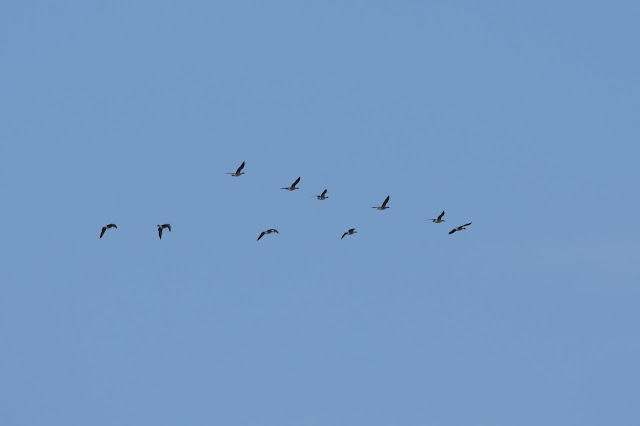 A while back we saw some Starlings on the cliff top but had no camera so had to make do with a grotty phone pic for our 1 mile bird blitz. Today we were able to better it at last. 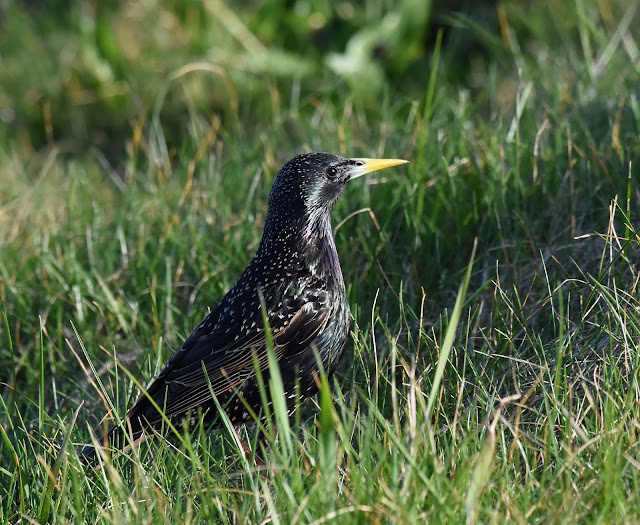 Another Wheatear was sat where they often sit on the rocks at the bottom of the cliffs. 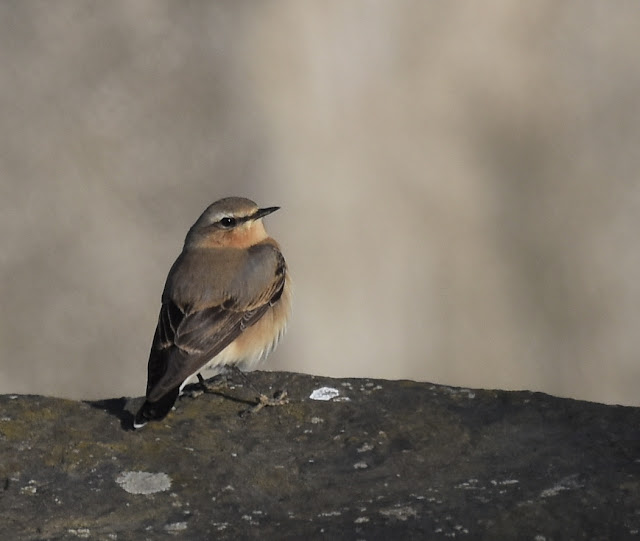 Nowt in't garden again so we amused ourselves with trying to get some pics of the Cowslips in the tub by the back door. 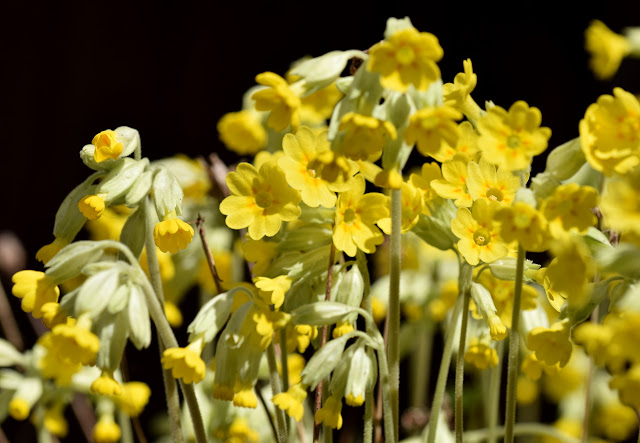 So mixed results during Lockdown Week 4. Looking forward to what we'll find in Week 5.

Where to next? More of the same few sites...hopefully ther'll be plenty of interest to recant to you next time.
In the meantime let us know who's hanging around or passing through your restricted outback.