The Safari was struggling with the poor weather early in the week especially in the garden. On Monday only a Buzzard low over the chimney pots made it into the garden notebook and Tuesday's only entry was of a Blue Tit collecting dog hair for its nest again. We made no further entries until Sunday! The camera didn't see much action most of the week either.
Highlight of Day 1 was four high flying Whimbrels heading seawards early morning and a few minutes later a Sparrowhawk flew across the main road heading to the park with prey in its talons.
On our exercise walk round the park - about a dozen times - we had a Whitethroat and Lesser Whitethroat on the rough field but otherwise it was quiet.
Tuesday was a bit of a better day and we took our exercise walk the other way along the North Blackpool Pond Trail. It was lively enough.  Pick of the bunch were two Lesser Whitethroats, three Whitethroats and a showy Sedge Warbler but we hadn't taken the camera - dohhhh. A shed load of butterflies too, don't think we've ever seen so many Orange Tips in one place in Blackpool before, we also got our first Speckled Woods of the year too.
A modicum of excitement was had in the garden when a female Blackbird dropped in for a quick dip in our little waterfall. It was very wary keeping tabs on us as we raised the camera cautiously from behind the kitchen window's blinds. 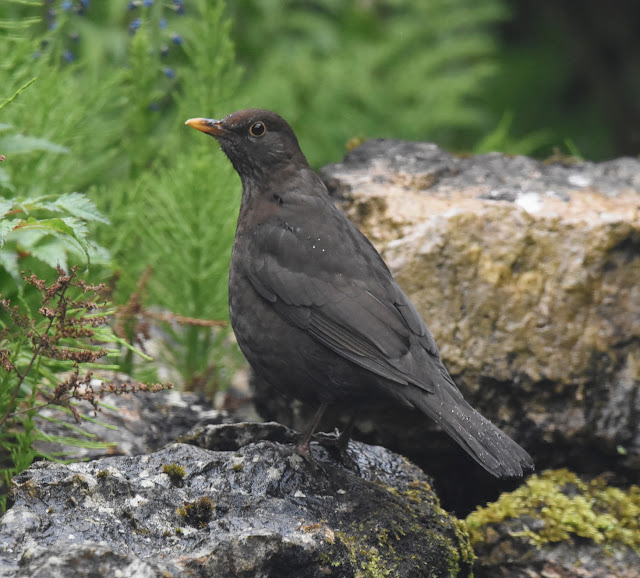 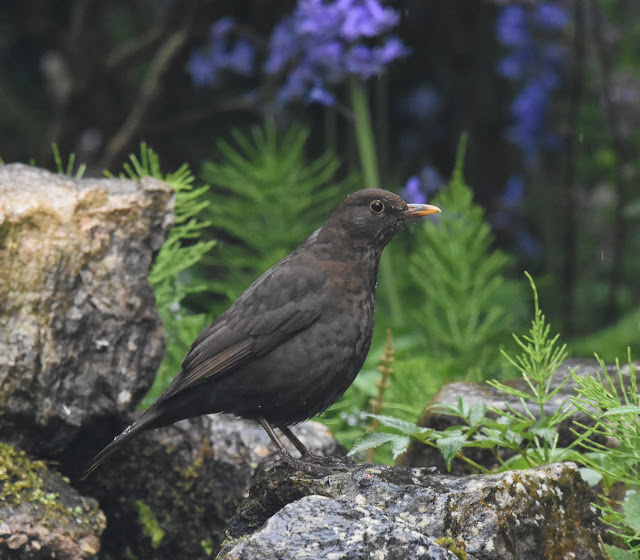 The following day we had another change of scenery with a visit to the prom. It was cold and blustery with very little on offer either out to sea or along the cliffs. Out to sea was marginally better half a dozen Gannets and a male Eider versus a couple of flighty Wheatears along the cliffs.
We were back there again on Thursday, not entirely sure why it was always going to be pretty dire. Easily the best sighting was of four Gannets diving for fish just beyond the low tide water's edge, four Sandwich Terns were there too. Again no camera but they would have been too distant anyway. Along the cliffs we had another Wheatear and a Swallow heading north as well as one in the side street where they nested last year.
May arrived on Friday and once again we were up at the cliffs. Slightly better today with a flock of 11 Gannets followed by a few others. On the return leg we stopped for a scan and hit a bit of jackpot - way out on the horizon we spotted the unmistakable cruciform shapes of careening Manx Shearwaters. In the few minutes we stood watching we counted over 50, there could have been many more out there we couldn't see with just our bins.
In the afternoon we broke the rules a bit and went out again with Wifey and the mutt, we made sure we kept well away from anyone else, we prefer five metres rather than two anyway. This time we went up to the North Blackpool Pond Trail and came across our first brood of cutesy Mallard chicks. 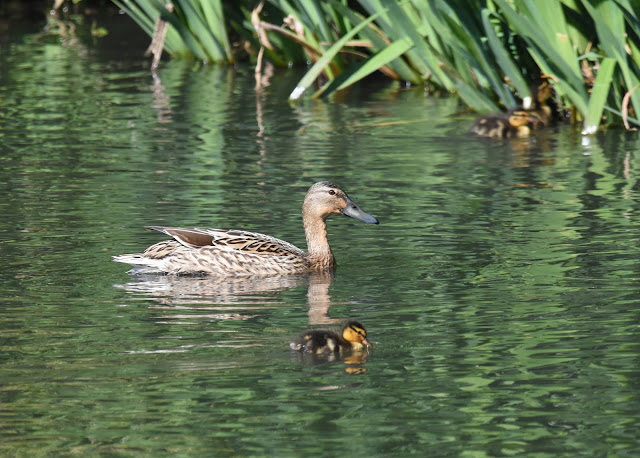 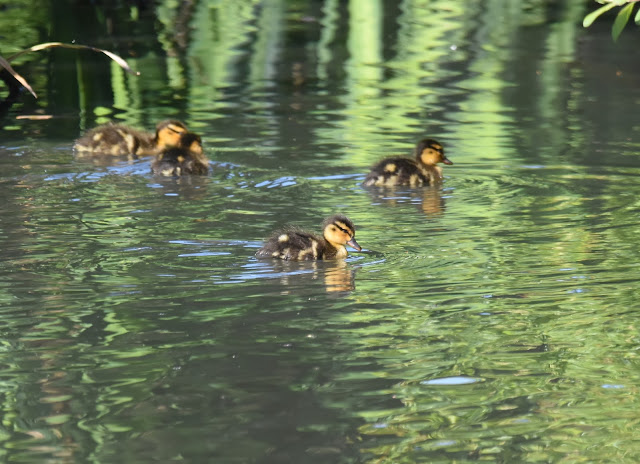 A Robin was 'cock of the rock' singing from the top of the tallest tree in the area. We didn't have much opportunity to point the camera at anything else but as you can see from the colour of the sky it was a very pleasant hour out. 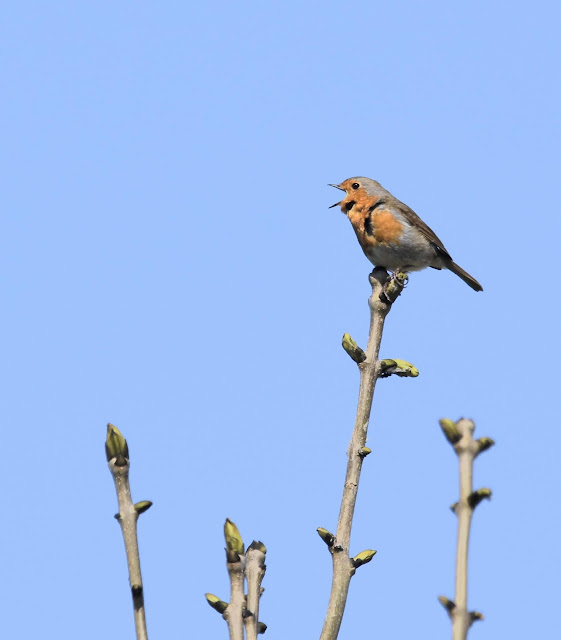 Saturday saw us having an earlier start down at the park. Not taking our phone was a mistake as when we got back to Base Camp we learned we'd missed a couple of Hooded Crows only 200 hundred yards away over the road. Found by the same lad who found the Redstart we dipped for the very same reason. Once is unlucky, twice is a bad mistake, thrice is just plain stupid - there's best not be a third time!
The afternoon was warm and sunny and saw us in the garden at Base Camp hunting down whatever invertebrates we could rummage out.
There's still a few a few Gooden's  Nomad Bees about. 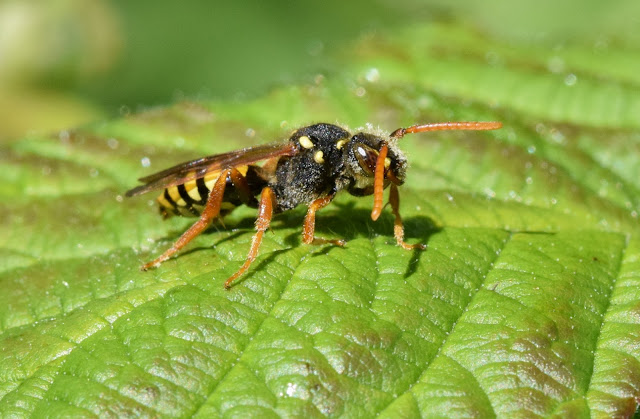 While watching the bees we spotted a Green Shieldbug, then another then another, four in all. 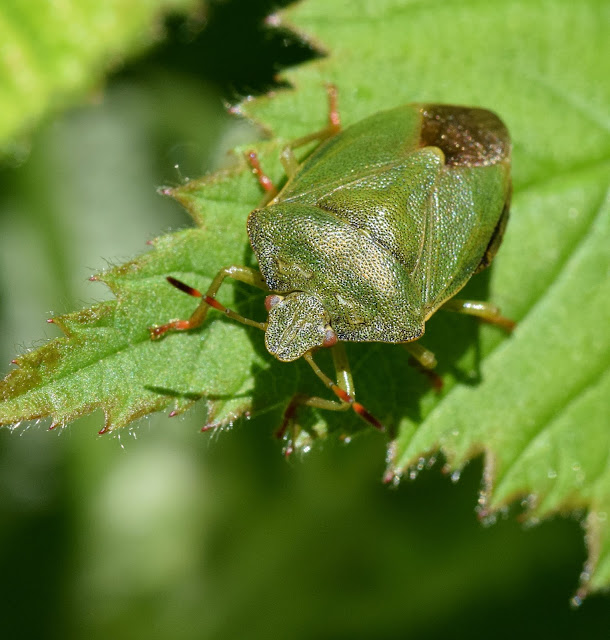 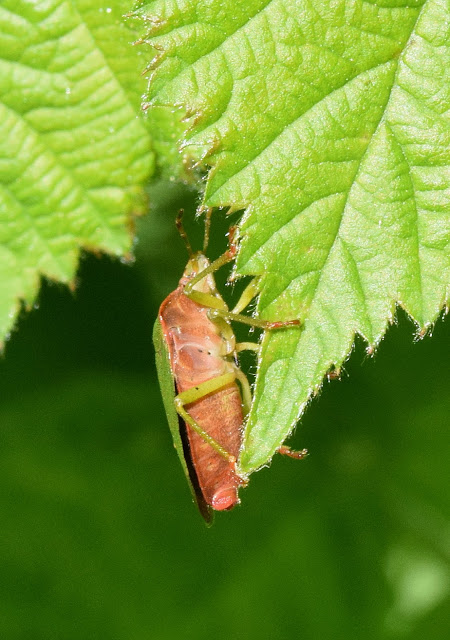 Also out n about were the first Honey Bees we've seen this year, that's bees plural we did see a solitary one a few days ago. 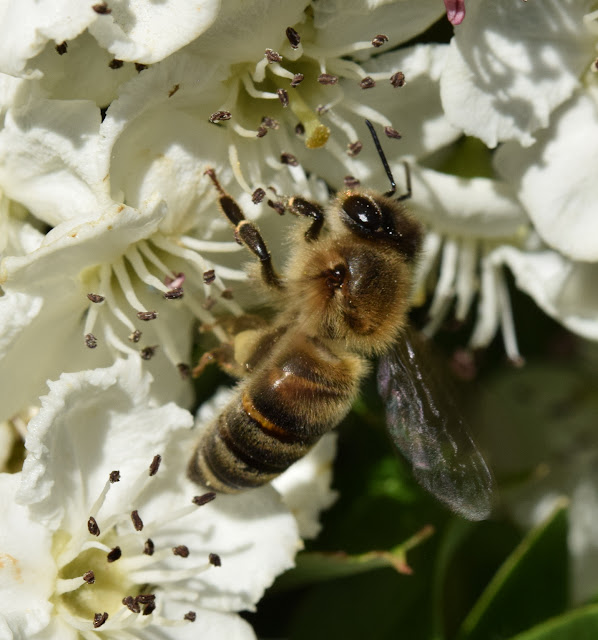 Other solitary bees included this long thin dark Andrena species - as yet unidentified. Any one got any ideas. 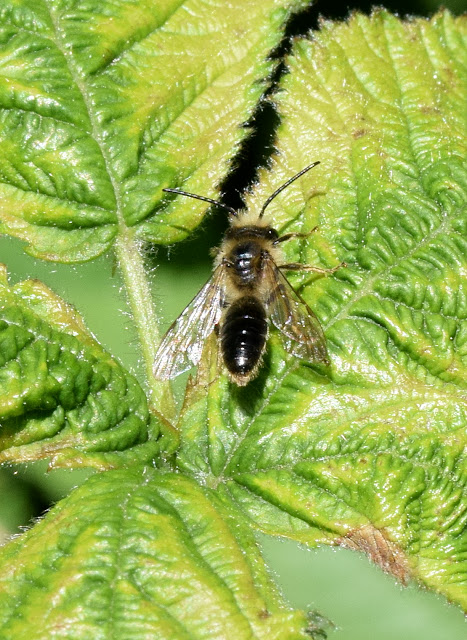 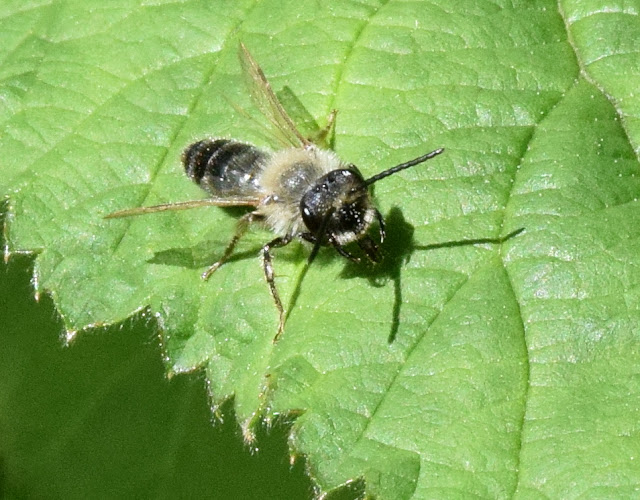 Much easier to identify, especially now we've got used to them, are these bonny male Blue Mason Bees. 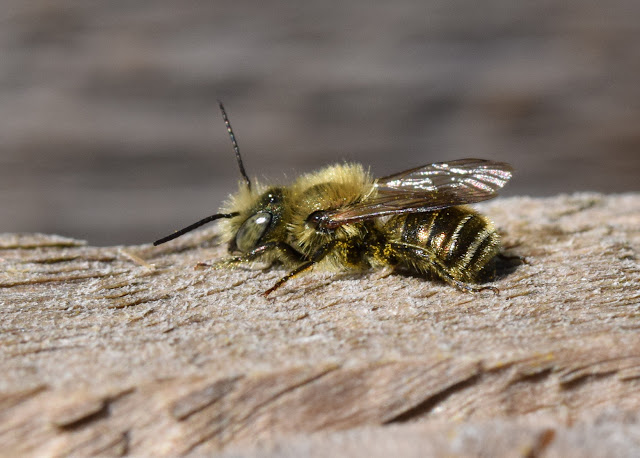 The only bird to report wasn't seen by us but 'discovered' on a friend's Facebook page - a Cuckoo calling at the crem along the North Blackpool Pond Trail - - that'll need further investigation next week for sure. Fingers crossed it sticks around.
The morning started cool but it warmed up just before lunchtime and while out in the garden we spotted a row of faces peering out of the Bee Hotel. We dashed inside to get the camera but by the time we got back out they'd all left bar one.
The compost heap is a good place to watch spiders, mostly Wolf Spiders, but further inspection had us looking at a dangly thing which when we touched it the spider shot out to defend its nest or at least check it wasn't damaged by the huge lumbering oaf of a human. The dangly thing looks like it's made from a Nettle leaf, the spider is most likely to be Tetragnatha extensa, quite a beauty when inspected closely.
The other spiders out in tthe light don't hang around for their pics to be taken they're always on the move. 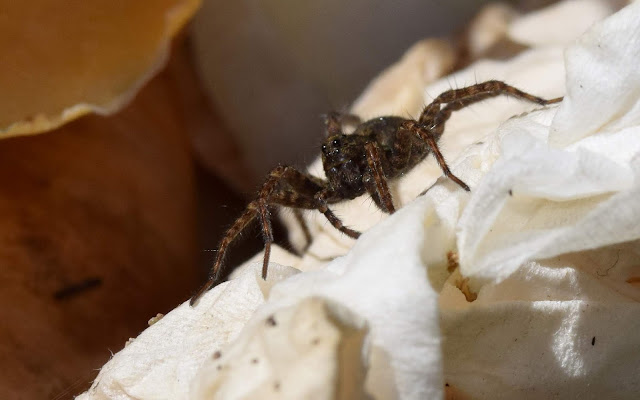 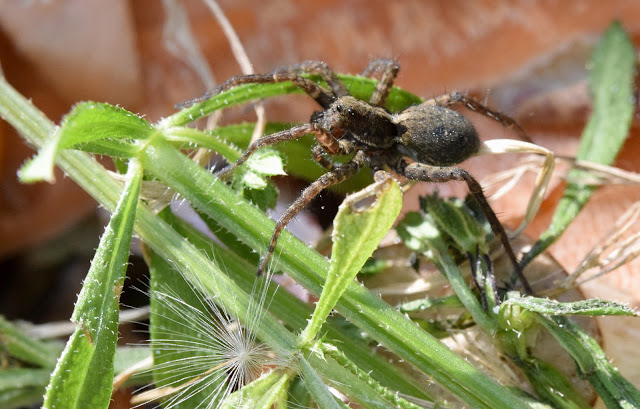 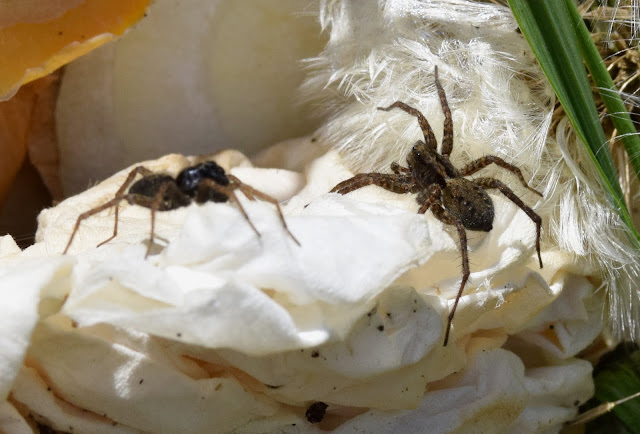 Judging by the way this one is signalling it would rather be the later than the former. 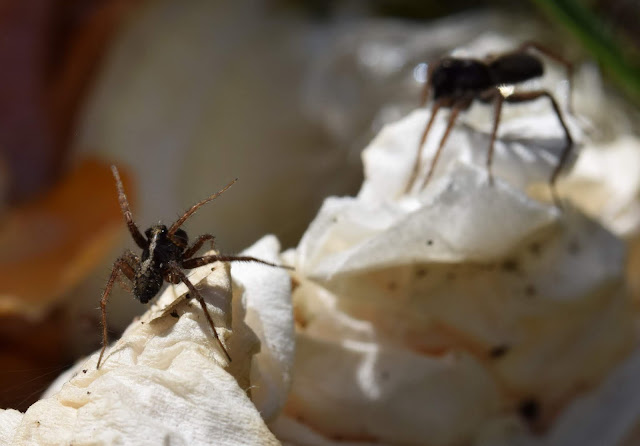 After getting the pic of the tiny Ichnumeon Wasp last week we've been keeping our eye out for some more. We've seen a few tiny flies when we saw another that looked a bit different so we fired a few shots off, but without our specs couldn't really see what it was on the screen. Downloading the pics on the laptop we saw it was a beetle, indeed a Longhorn Beetle, but which? CR offered an ID Grammoptera ruficornis. Turns out to be quite a little find - emphasis on the little - not recorded in the Fylde before (or if it has it's not reached the NBN maps yet) and there is quite a big hole in Lancashire away from the Morecambe Bay limestones. 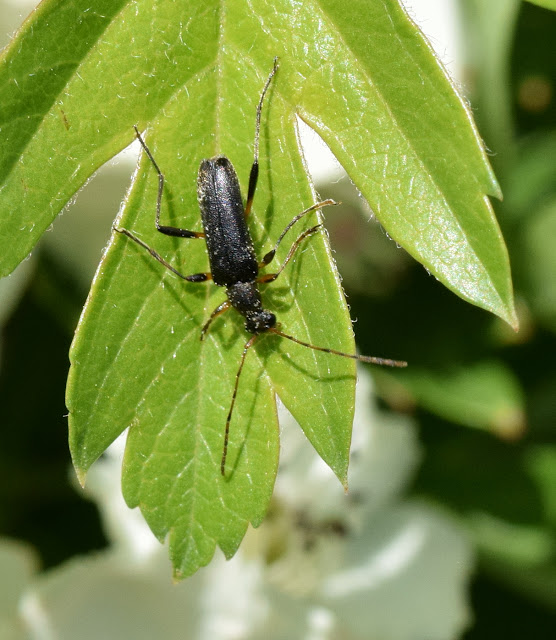 We're confident C has got the ID right but have put it on iNaturalist to see if we can get a confirmation or two. Not a bad (but very lucky) find in a small garden that's just been left a little to wilderness.
Where to next? Lockdown continues so it'll be more close inspection of what's on offer at Base Camp and the same three walking sites where something is bound to turn up, after all it is May and anything can turn up anywhere.
In the meantime let us know who's turning up in odd places in your outback

Stay safe - stay socially distant - enjoy the wildlife on your doorstep, it's out there for you to find all you need to so is look..and have a bit of luck.