The Safari has spent a little more time away from our immediate area now that travel restrictions have been lifted but we've still not bit the bullet and ventured very far away from the Fylde coast. With summer-like weather conditions many places have been bombed out by 'Covidiots' getting far too close to one another in huge numbers so we've played it safe and kept well away, we're quite happy not to risk becoming a statistic in the Second Wave.
A pleasant morning on the dunes early in Week 9 had us looking for lizards, only two very brief sightings, and butterflies which were more obliging in that the few we saw did actually keep still.
While we were there the biggest butterfly in the world turned up and flew directly over our head as it did a few training passes practicing almost landing at our small airport.
In recent years we've not been seeing many Small Heath butterflies at all an it's been several years since we last got a pic of one so we were especially grateful to see a good few today particularly this one that settled long enough for a quick snap. 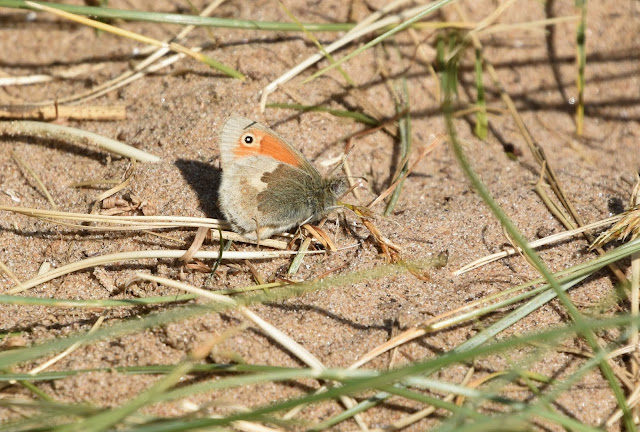 Back on the cliffs one morning we watched an angler bring in a Bass, too small to keep so had to be returned to the sea. However, his treatment of his catch was abominable. He left it flapping around on the concrete for nearly five minutes while he faffed around getting a new rig back in the water. Surely as an angler your first responsibility is to your catch whether you're going to take it homer for tea or release it back to the water.
But this chap seriously abused the fish while trying to unhook it. There's a cloth there could he not have held the fish to get a good look at what his disgorger was doing rather than trying to flick the hook out while the fish was in mid-air with the inevitable gravity-induced consequence when the hook did eventually dislodge. 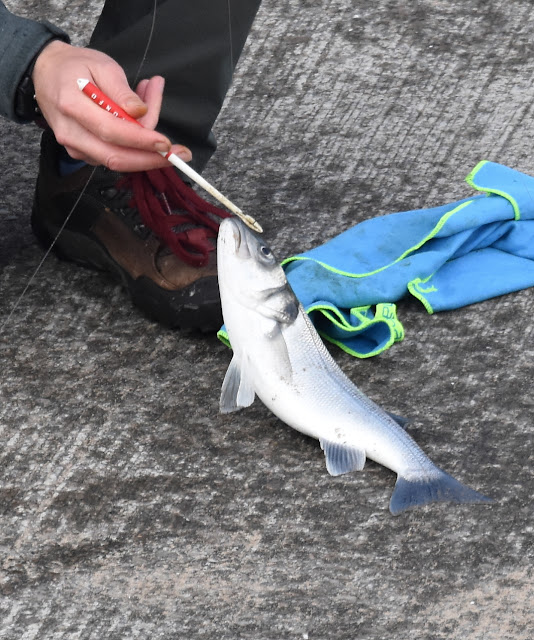 The poor fish's traumatic time wasn't over even then. It was dropped over the wall probably onto the sloping concrete apron below as the tide was on the ebb, the guy never bothered to check never mind walk the 15 yards to the nearest steps and gently let it swim off. Disgraceful behaviour and sadly he's not the only one to act like that.
Fortunately the fisherman who caught this Lesser Spotted Catshark had it unhooked and back in the sea within two minutes. 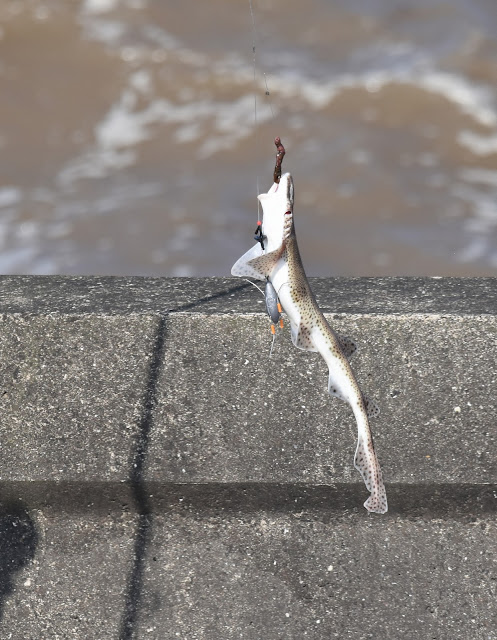 Back at Base Camp it was good to see a brood of two recently fledged Greenfinches in the garden. This one hasn't quite got the hang of feeders but you'll be pleased to know it sussed how they work not long after the pic was taken. 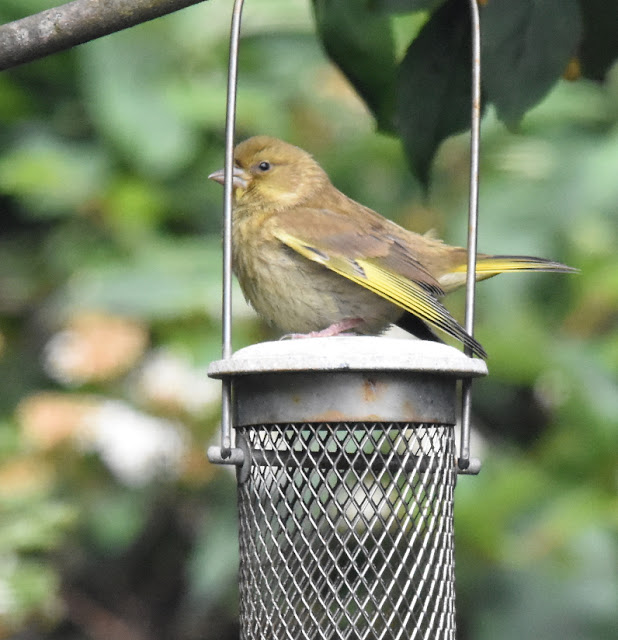 A safari to Marton Mere gave us the opportunity to take about 300 snaps of the Swifts cruising around about double tree-top height just to get this one almost usable shot. We've hardly seen any Swifts this year and it's fair to say we've seriously missed the screamy sky-scthyers.
Another bird we've not seen many of is the Kestrel so it was nice to have one fly past us quite low down, might have helped the composition of the pic if it wasn't quite so close and was coming towards us instead of going away but hey-ho a little stunner whichever way they're going. 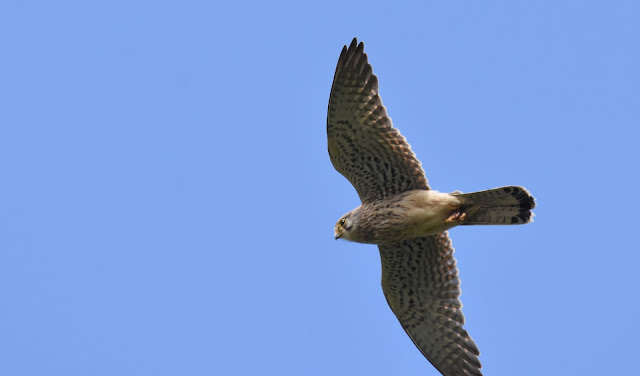 Not far away deep in the undergrowth a Wren blasted out his song and for a few brief moments sat out in the relative open. It always amuses us that something so small can produce so many decibels. 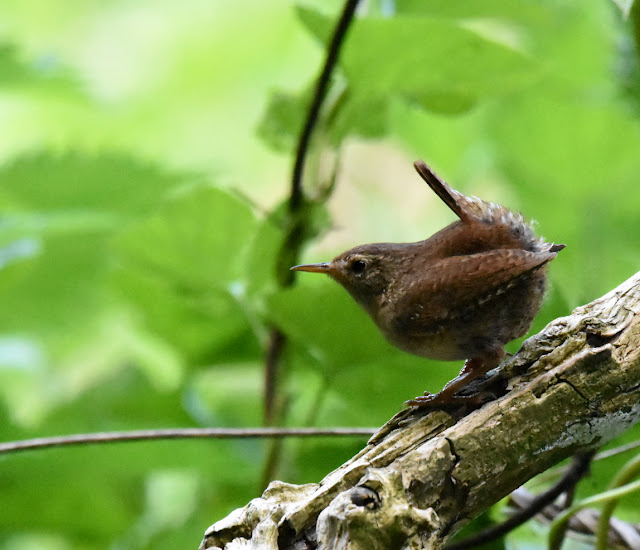 Getting back towards the car the farm buildings had a few Swallows and House Martins tazzing about, trying to get one in good light was another matter
During week 10 we spent more time in the garden watching the bee hotel where the Blue Mason Bees are still active. The males hang around resting on the nearby plant pots in the sunshine 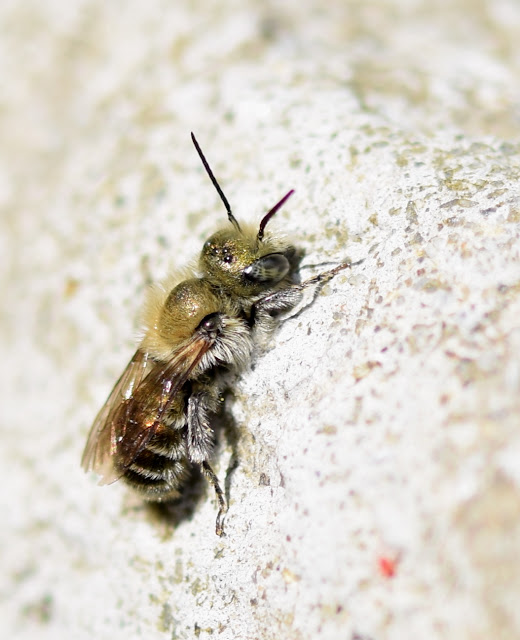 waiting for new females to emerge, like this one that's pushing a blob of the mud seal of its cell in front of it. 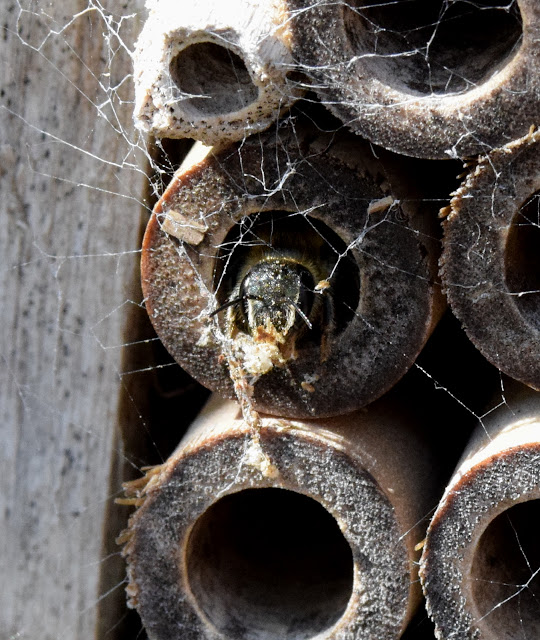 The Red Mason Bees are still busy too. So busy they have to cleave their growing brood cells backwards and upside down. Beneath the bee hotel our God-only-knows-where-they-came-from Madeiran Orchids have come into full bloom. 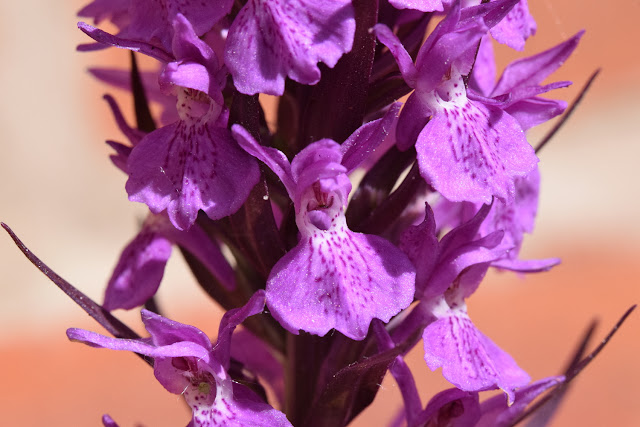 Back at the bee hotels there's been a lot of interest in them from this parasitic wasp, Sapyga quinquepunctata. We've seen it several times hanging around on the sides or tops of the hotels, it seems to be waiting for the right moment to make its dastardly move. 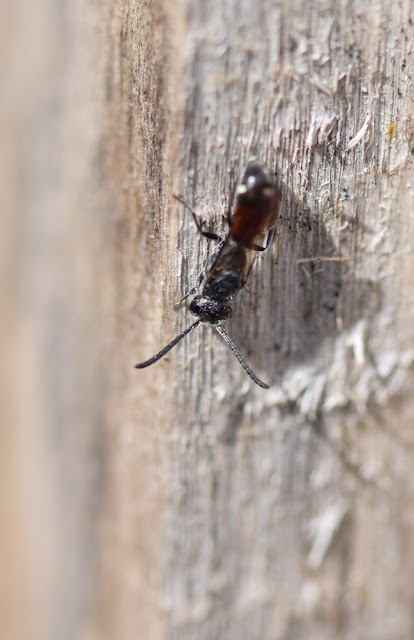 Always keeping an eye open for other stuff around the garden we saw this Sawfly land on a nearby rose leaf where it appeared to be ovipositing on the top surface of the leaf - we'll have to keep an eye on that particular leaf to see what, if anything, transpires... 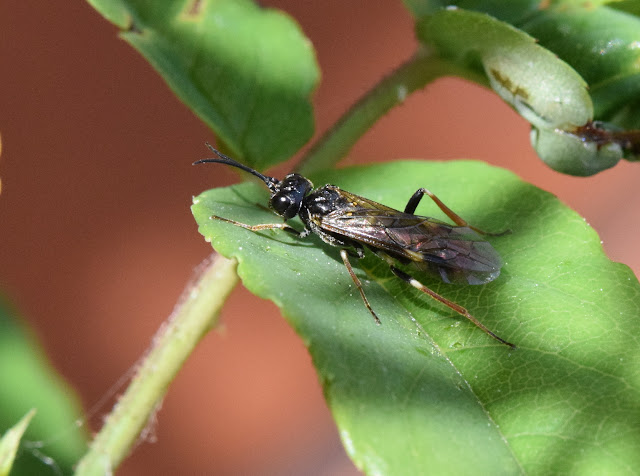 lso creeping around was this Zebra Spider, one of several in the garden now. 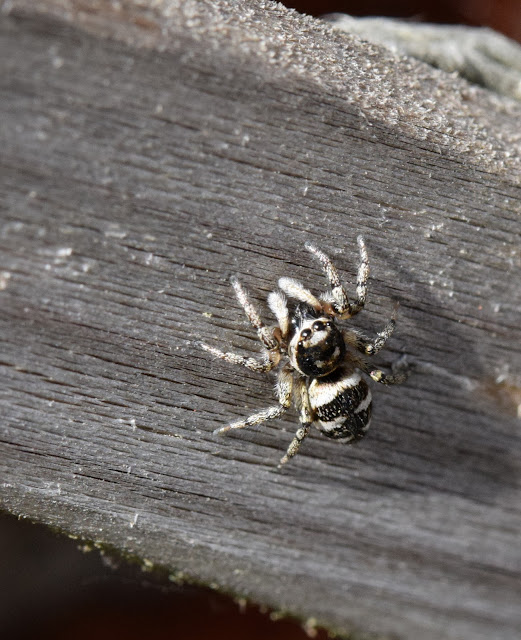 And noticing a flutter had us chasing this pristine only just emerged Mint Moth round the plant pots beofre it finally settled in a suitable spot for a snap.  Who said moths are just butterflys' boring cousins, this one would knock many butterflies into a cocked hat if only it were 3/4/5x bigger. 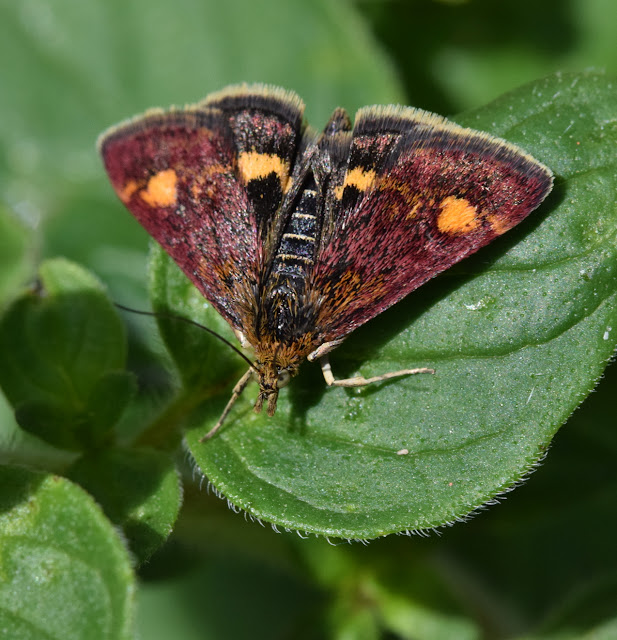 In the heat we decided to take the mutt round Heron's Reach where he could stay a little cooler in the shade of the trees. We were surprised to see so few bees and butterflies around the flowers - has the very dry weather affected nectar production? There were some good sightings though including our first Emperor dragonfly which flew off as soon as we lifted the camera - many thanks to the photographer who pointed it out to us. We did get the lens up in time for our first Azure Damselfly pic of the year. 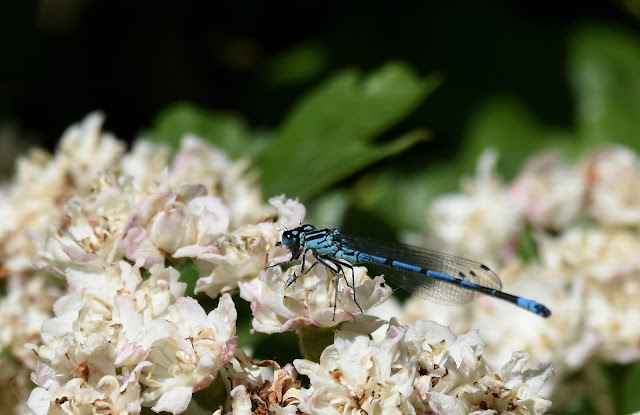 Chiffchaffs were singing all over the shop, by the time we'd realised we'd heard about half a dozen we thought we really should have been counting them - similarly the Blackcaps too, just how many are there round there these days? 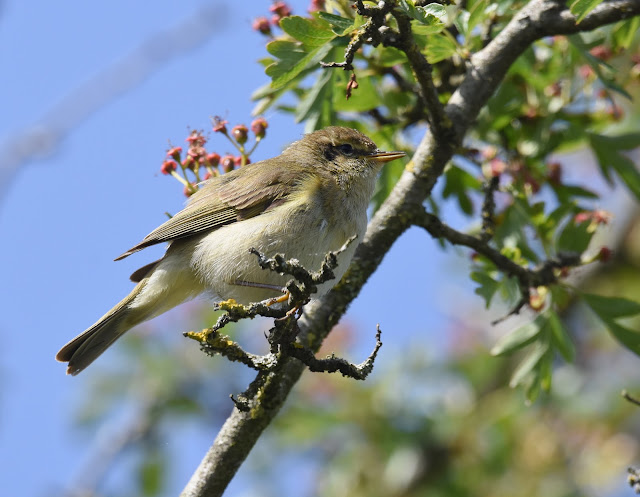 Back with the invertebrates we saw this damselfly in somewhat lumbering flight and once it settled could see it had captured a rather substantial prey item.  Once stationary we could see it was a Common Blue Damselfly and not another Azure Damselfly. 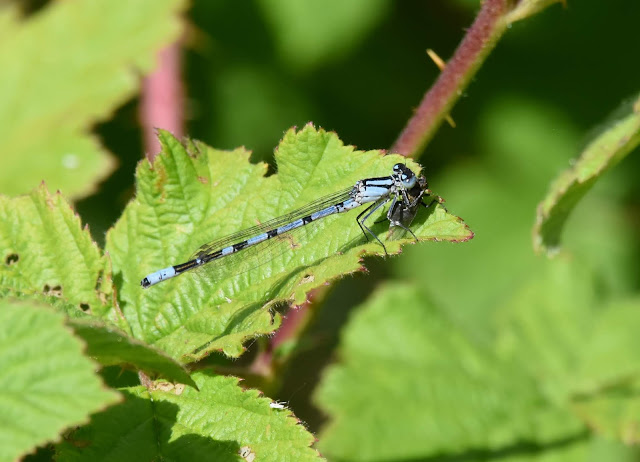 We'd seen a Large Skipper butterfly sitting on a small patch of Nettles and while trying to get a pic managed to disturb it and then not be able to relocate it. But while trying to re-find it we spotted this unusual beetle. We managed a couple of half decent phone pics and later discovered it to have the rather long winded name of Golden Bloomed Grey Longhorn Beetle and that it could be the first record of the species in the Fylde. 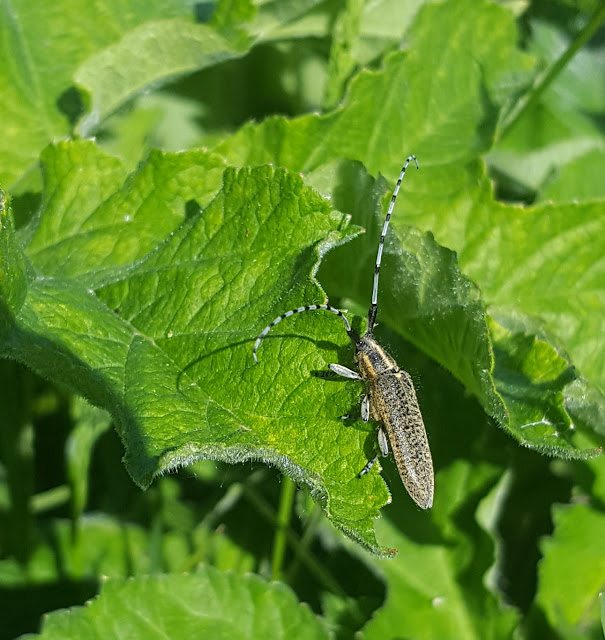 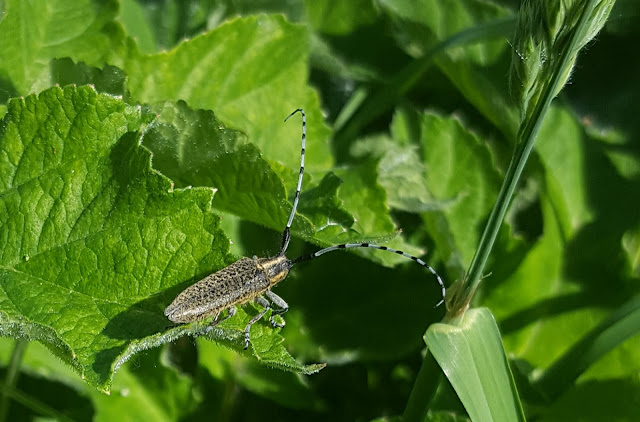 Further on a Song Thrush sat up nicely for us. 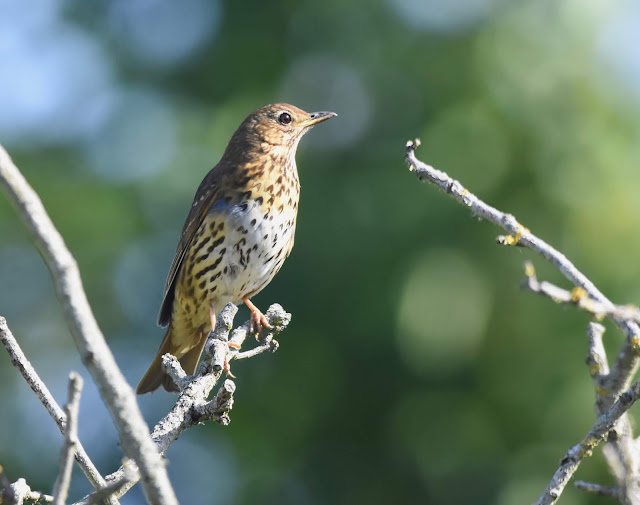 A very good morning's walk but the mutt did get too hot despite being in the shade of the trees most of the time - it was a very warm day!
Back at Base Camp the Sapyga quinquepunctata was still to be seen lurking furtively around the bee hotel. 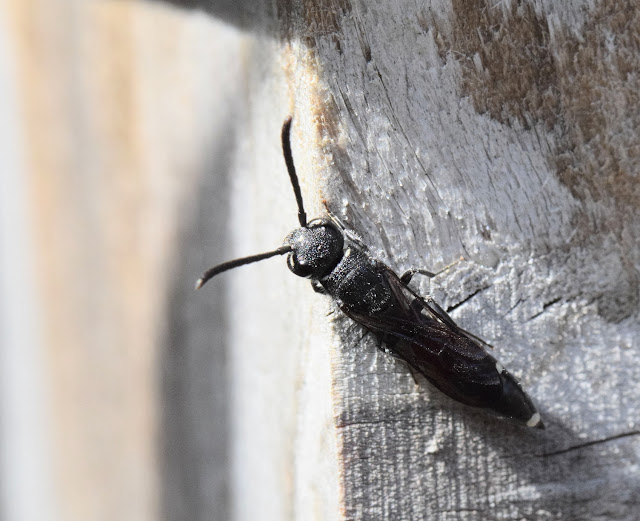 Bottlenose Dolphins had been seen a couple of morning's on ther trot down at the coast so we gave that a go knowing full well that if we took the big lens they wouldn't show. You guessed right they didn't. At least the local House Sparrows aren't so camera shy. This one has seen something moving in the grass and was about to fly down to snaffle it up to take back to its nestlings across the road. Their eyesight must be phenomenal because what ever it was was too small for us to make out in its beak as it departed - how on Earth did it spot something so small tucked up in the grass from about five metres away? 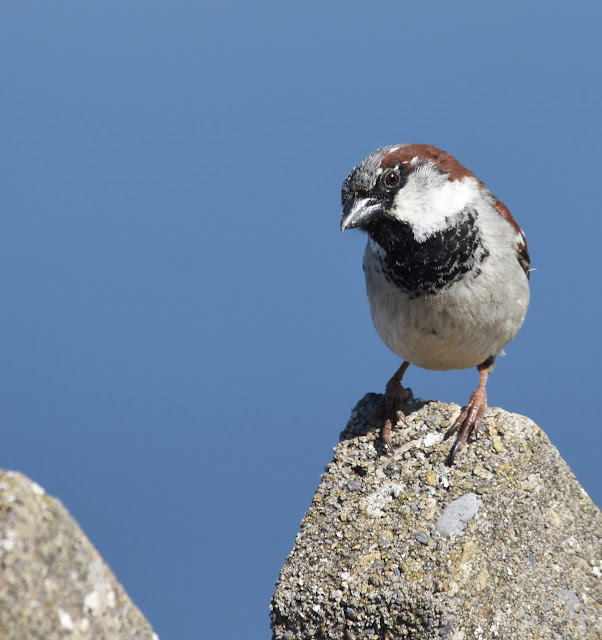 There wasn't much else about although one of the local Pied Wagtails was very confiding and allowed close approach and for us to get down low for an eye-to-eye shot. 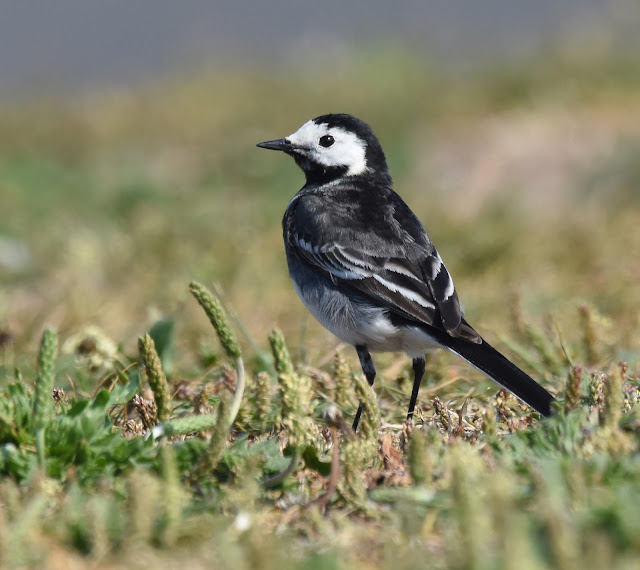 On our return, almost back to the start, we spotted a black dot in the water a long way down towards the pier. We knew what it was and wished it was neared, Our first Grey Seal along this section of the prom of the year - can't believe they've been so few and far between, we would have expected to have seen a t least a few by now given that it's the end of May. But at least it's blubber even if it;s not a dolphin.
The bee hotel is now under constant attack from the wasp and it's venturing across the front inspecting the holes. 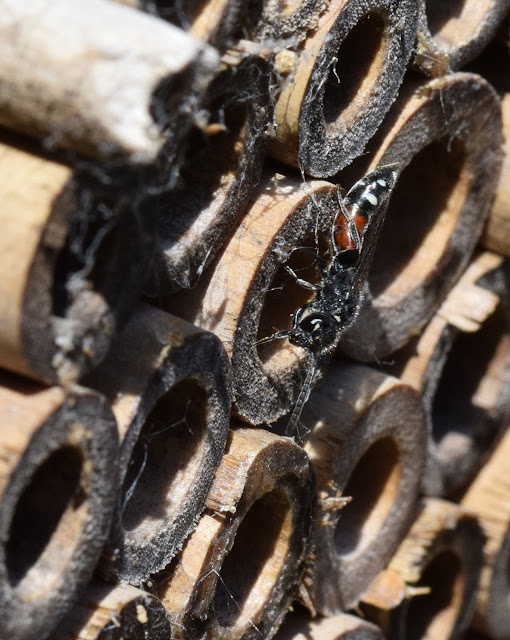 Elsewhere in the garden the pond has been very quiet this year until the last few days when we've been seeing Bumble bees dropping in for a drink...what was that we were saying about the dry spell and nectar production earlier... 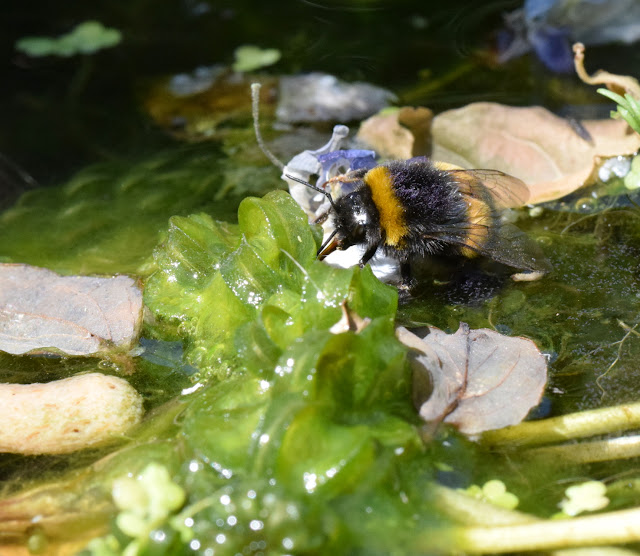 We've not had any Blue Tailed Damselflies emerging yet, really hope they've not become extinct in there at the hands of the fish - or should that be mouths of the fish?
The garden did turn up this rather wonderful Red Legged Robber Fly which we though tat first might be one of the Spider Hunting Flies. Turns out it could be another first record for the Fylde although having said that the NBN maps we check on can be notoriously out of date for many species. 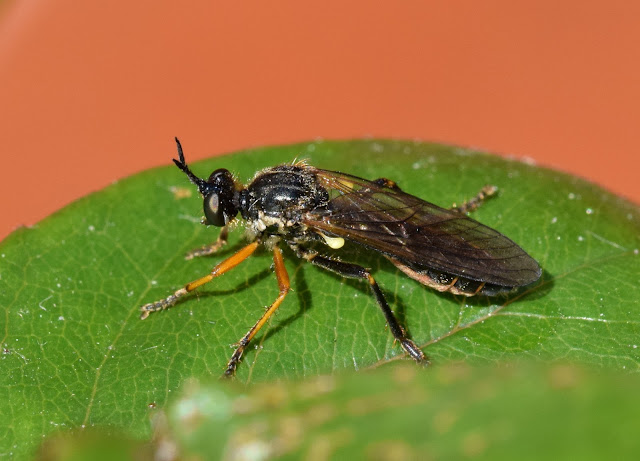 Much bigger than the tiny Zebra Spiders that scurry around the trellis is this Tegenara Spider that has set up home in one of the plant troughs by the garage wall. 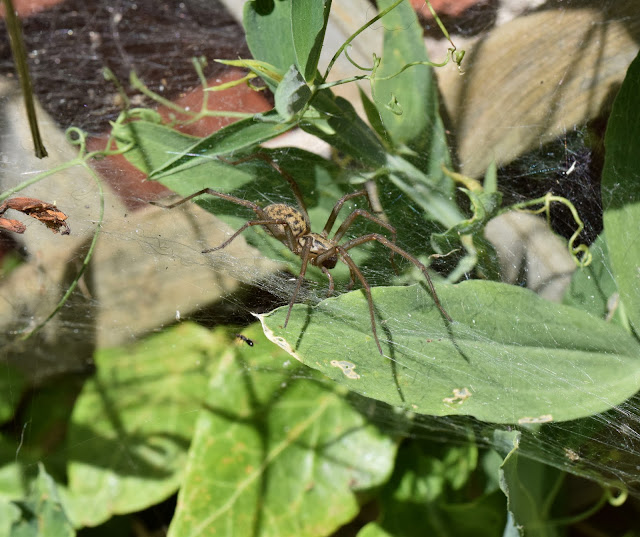 While looking at more bees coming in to the pond fro a drink we spotted this larva moving around, we guess it's some kind of hoverfly larva but could be horribly wrong. 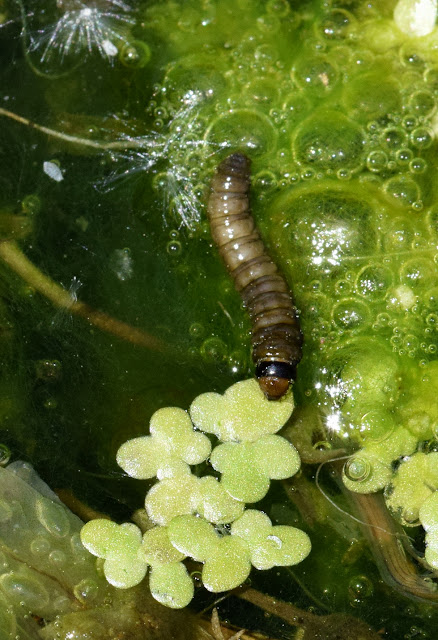 Another fruitless dolphin search did give is a female House Sparrow to compliment the male from a couple of days earlier. 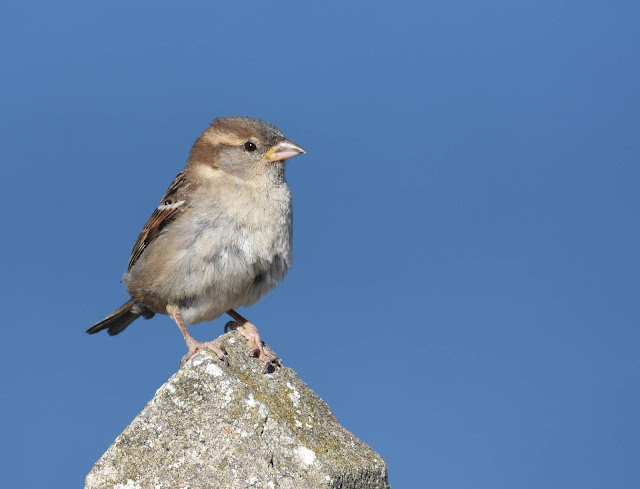 And finally we managed, or nearly managed, to get a pic of the parasitic wasp leaving one of the active nesting holes in the bee hotel, Blue Mason Bee is the victim in this case. 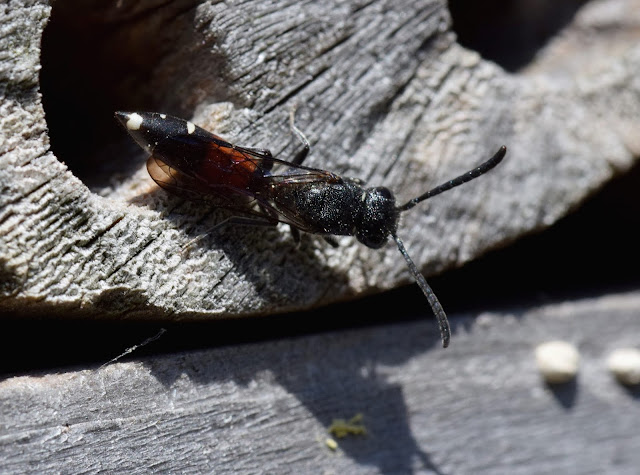 This type of parasitism is the reason why bee hotel tubes should be at least 10cm deep and preferably 15cm. The females bees are produced at the back leaving the males at the front much more vulnerable to attack but the females are much more valuable to the population as a whole, one male can fertilise several females so it doesn't matter if many/most get parasitised. On the other  hand if most of the females get parasitised because the holes are too short then the bee population will start to decline. So take care when buying bee hotels from the likes of supermarkets and garden centres, make sure they are at least that important 10cm deep. Better still make your own but again you'll need long enough drill bits or bamboo tubes.
So there you have it, plenty has been happening almost far and wide.

Where to next? The weather has taken a big turn for the worse so some of our favourite places further afield may be less busy and we can give them a try.
In the meantime let us know what's been seen in your locked down outback.