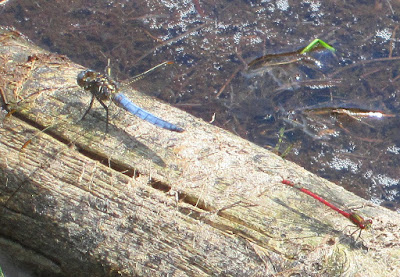 Keeled Skimmer/Large Red Damselfly Pete Woodruff Clik The Pik
It was excellent that I found a pair of Keeled Skimmer on the bog at Birk Bank yesterday, with the/a female ovipositing. I was also pleased to see a pair of Large Red Damselflies coupled, a male Broad-bodied Chaser was being seen off by the male skimmer every time it came close.
Over the bog and on a circuit via Cragg Wood and back down Littledale Road to return along Rigg Lane, 8 Small Pearl-bordered Fritillary seen. When I arrived at the stream which is the young River Conder flowing over the ford by Cragg Cottage, I sat a while to eventually spot a dragonfly shooting over the surface, it turned out to be a Golden-ringed Dragonfly which was the main reason for my heading that way....Brilliant.
Birds on the day were as much to be heard than seen. Sightings started of with a surge of excitement when I came across a smart male Stonechat just a few minutes after leaving the car park on Rigg Lane, but it was disappointingly the only one seen in the 5 hours spent there. Up to 5 Garden Warbler and similar Blackcap heard, uncounted but probably 10 Willow Warbler, 4 Mistle Thrush and very few Meadow Pipit, a crouching female Red Grouse probably had young with it, up to 4 Wren singing, 2 Chiffchaff, 2 Robin, and a Spotted Flycatcher on the woodland edge at Cragg Wood, with House Martin seen entering nests at Cragg Cottage.
Butterflies were a bit thin, but noted 6 Small Tortoiseshell, a Red Admiral and Meadow Brown seen.

I had an interesting conversation with the gamekeeper at Cragg Cottage, during which I secured his permission to enter Cragg Wood with the proviso that I did so before the end of August.