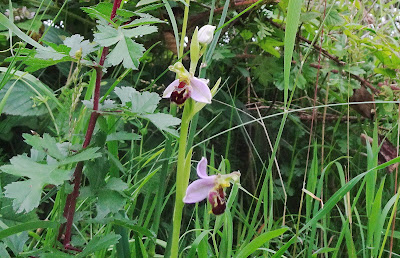 Bee Orchid 22 June. Pete Woodruff. 'Clik the piks'
It was third time lucky when KT and myself visited the site on the outskirts of Lancaster again, where we found three spikes of Bee Orchid, not that all that easy to find in the long grass on the bank. Other Orchids in the area have gone through the roof, when 378 Common Spotted were counted. Thanks to AC for his contribution here. 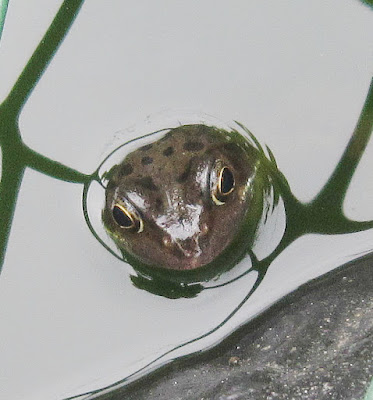 Garden Pond Frog. Pete Woodruff.
Everyone was chuffed to find a Frog in our garden pond recently, it has been seen three times since in various parts of the garden.

I had an excellent update from Howard Stockdale, with all the news from Conder Pool. 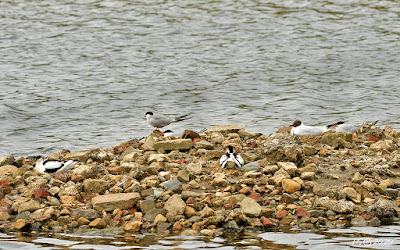 No Vacancies. Howard Stockdale.
The news included this image of a full house, with two Common Tern, two Avocet, and a Black-headed Gull all sitting on the island.

A Common Tern appeared to be an immature on the marker at Conder Pool two days ago on 22 June. 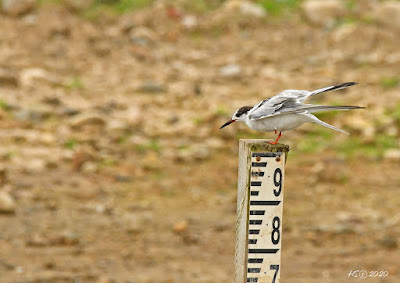 Common Tern Conder Pool 22 June. Howard Stockdale.
It was an older bird with stunted growth related to it's injury, having lost most of it's lower left leg contributing to poor health.

The header image is of the first breeding Common Terns of Conder Pool 2014, and shows an adult with two young including one of the runts I mentioned in my last post as being a tradition with the terns here.