The Safari received an email from the water board imploring their customers to save water. Well that did the trick it has hardly stopped raining since! And as a consequence our forays with the camera have been somewhat curtailed.
Needless to say though we have been out on safari looking for all manner of interesting wildlife.
Our first trip was down to the docks at Preston to have a look at the tern colony which apparently hasn't been doing so well this year. A Combination of ferocious predatory Coots and ever-present Lesser Black Backed Gulls have meant far fewer Common Tern nests this year. We met up with SB to give her a skull a dog-walking friend's son had found at the bottom of their garden. We thought it was a Fox as it had extremely worn teeth but as soon as S saw it she said Cat. taking up our usual position on the south side of the dock where the light is supposed to be better it was immediately obvious that there were no  tern nests at all on the pontoons on this side. Rather than take the car round the far side and look into what little light there was we walked across to the bullnose within the dock and tried to get some shots of the Common Terns coming and going along the short channel to the lock gates. Had we gone round to the other side and viewed the northern set of pontoons there's a chance we might have seen the pair of Arctic Terns. 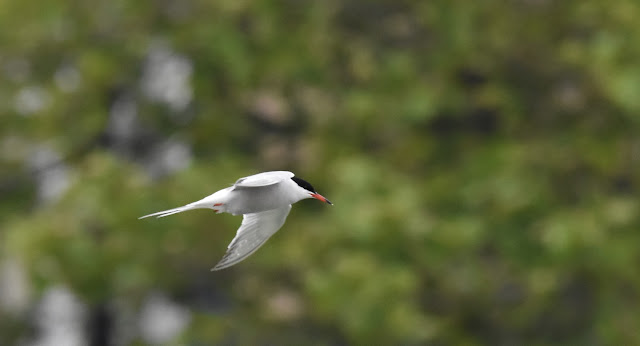 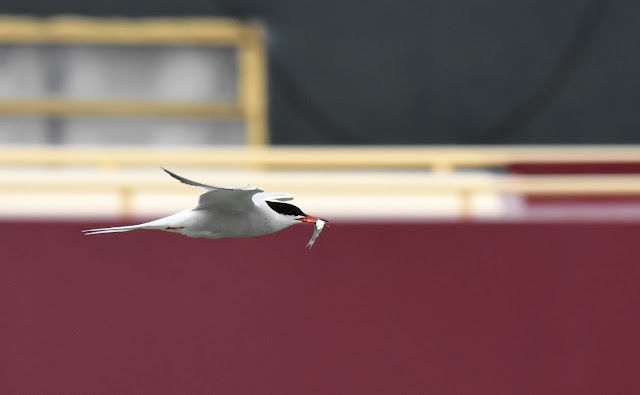 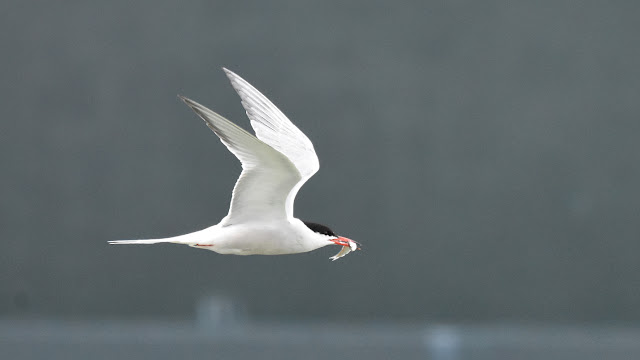 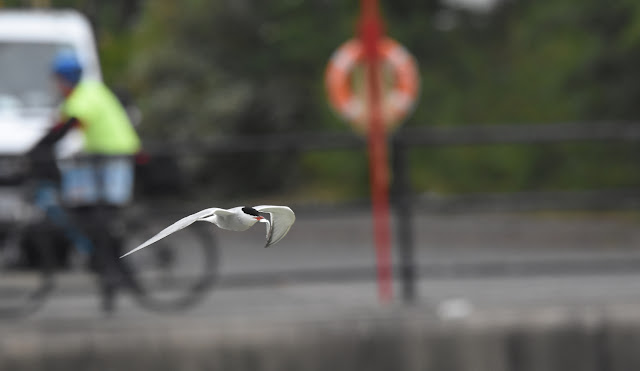 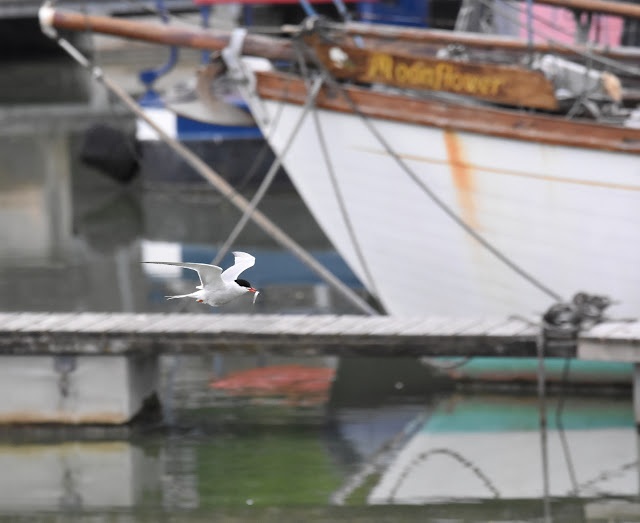 Nearby in a gap between the blocks of flats is a small patch of 'amenity grassland' which has  a superb range of wildflowers on it including a sizeable population of Bee Orchids. Unfortunately it had been mown the day before because long grass is 'untidy' not that it was very long anyway. This was the only Bee Orchid to survive the mower out of at least a dozen others apparently in flower a couple of days earlier - what a shame! This out-dated out-moded Victorian 'control nature at all costs' attitude has to stop or be stopped and soon. 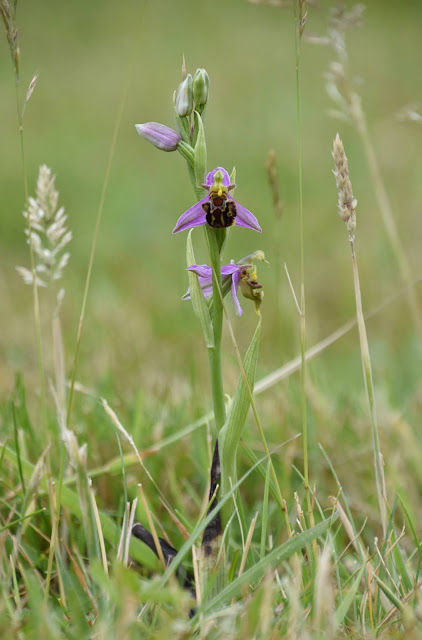 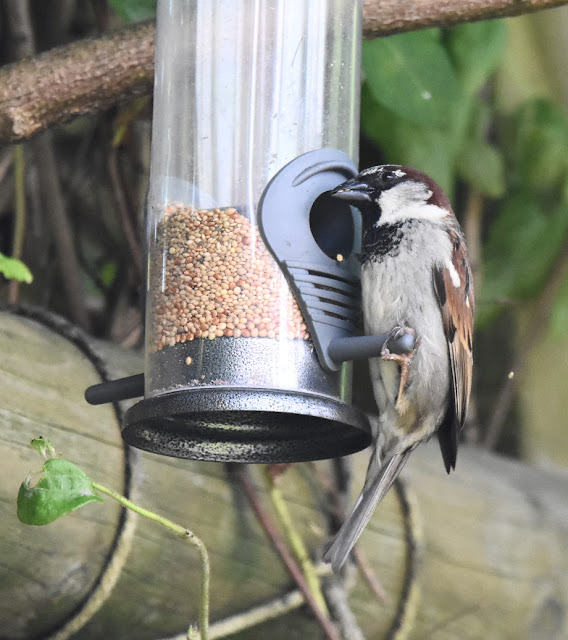 so much so that we went and ordered a ginormous bag of the stuff so we're praying he sticks around and brings the wife and kids to the feast in due course too.
A visit to the rock pools at South Shore which we ransacked regularly when we worked down that way was a little disappointing. The loss of the old over-spill pipe along the beach seems to have allowed much more wave action on the wall and there is now far less seaweed for the creepy-crawlies to hide in.
We struggled to find more than a handful of Common Prawns although this one in berry was a welcome sight. 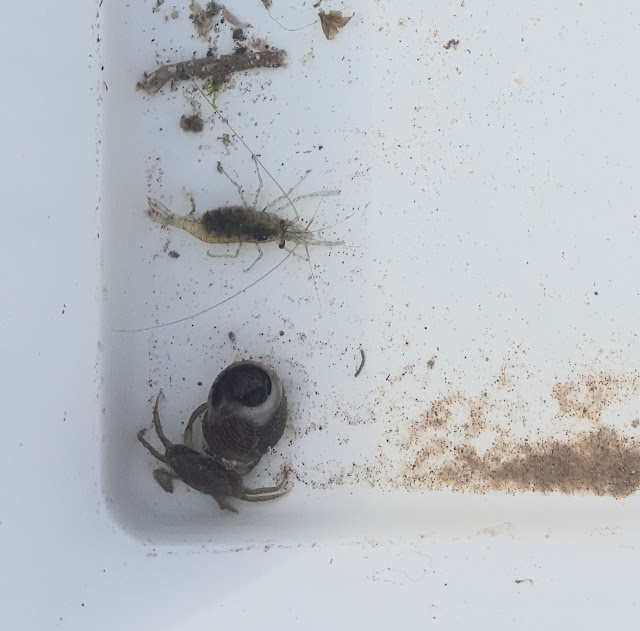 Green Shore Crabs were similarly hard to find unlike the Periwinkles of which there appeared to be more than we've previously noticed.
One of our main aims of this safari was to find some fish for our Vertebrate Photo Year List Challenge. In the pots we saw a few small Blennies but couldn't catch any, they're just far too quick for us with no seaweed to hide in they see you coming long before you can lift a net. The runnels below the seawall held a a small number of Sand Gobies but agaqin they were too quick for us. Normally another net is required and some team-work to out-wit them; fancy being out-witted by a fish with a brain the size of a pin-head - sad but true!
Further down the beach in the next runnel over the sand-bank we did catch this juvenile Sole (PYLC #155) and some rather large Brown Shrimps that were bigger than it. 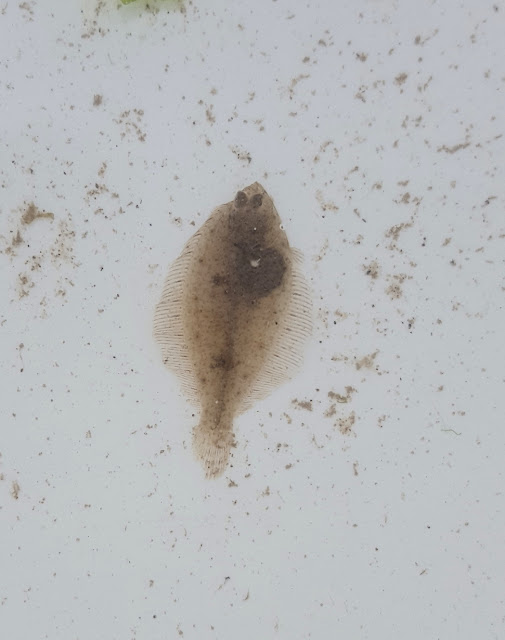 Also on the beach were masses of Sea Gooseberries. There were several different strand-lines of them as you went down the beach. 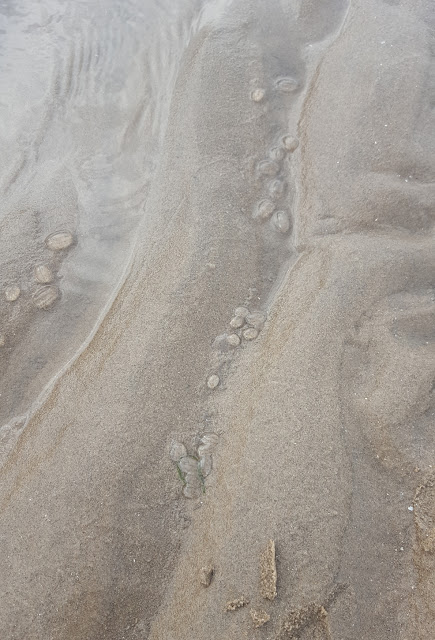 A quick back of the fag packet calculation gave us a figure of somewhere between 10 and 15 million between St Anne's and Fleetwood, based on the density we noted above and there may have been more as photos on the local media sites showed them much more tightly packed than we saw them in various places along the coast.
The following week we had a surprise visitor to Base Camp. A Coal Tit turned up - not seen one here since the end of the winter. 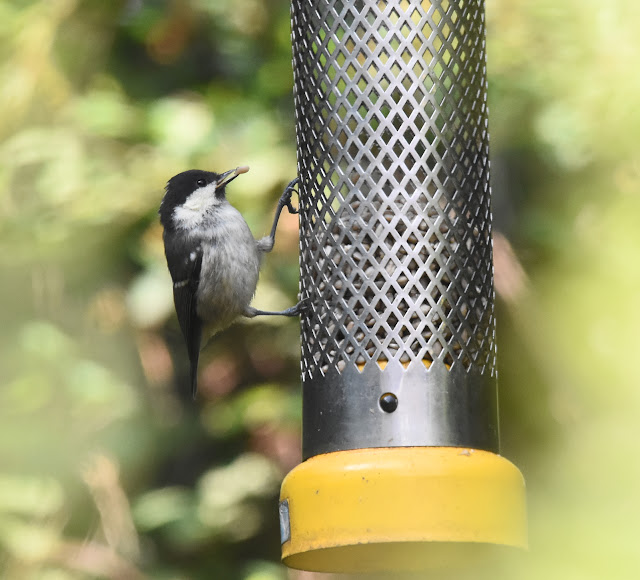 A wander round Heron's Reach starting out in the Woodland Gardens gave us this massive Parasol Mushroom, a real corker! 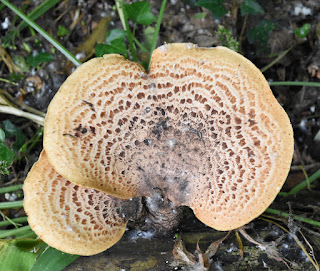 Once out on the more open track we came across a few butterflies including our first Painted Lady of the year. 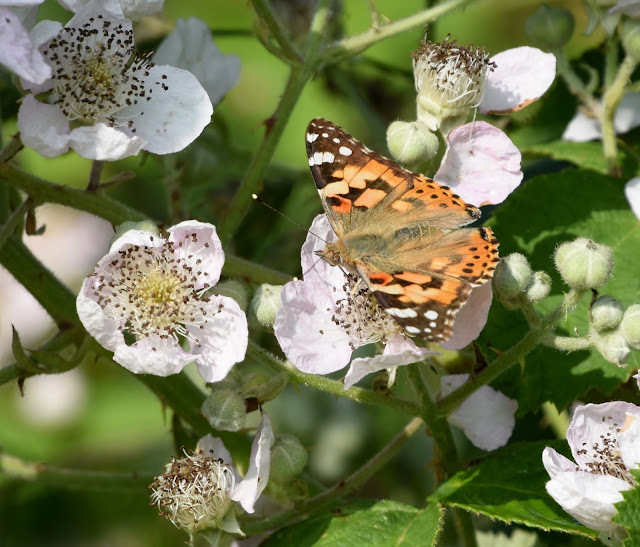 Another good find was this hybrid Marsh Orchid spotted in a place we regularly check but have never seen one there before. 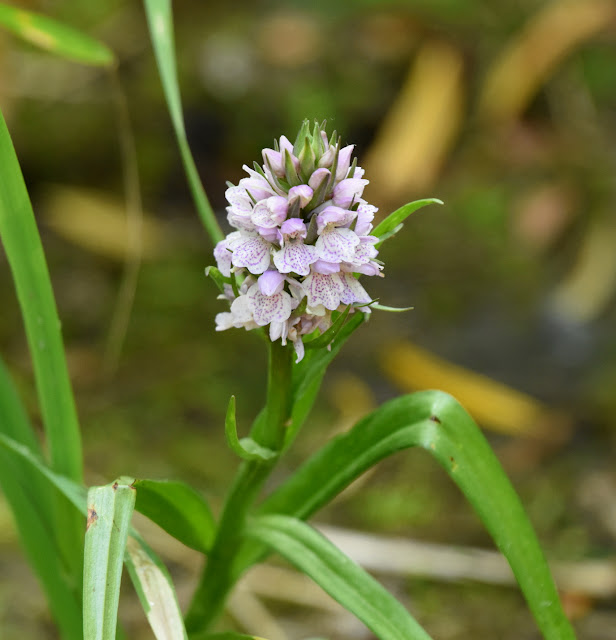 An interlude of bright weather had us nipping out to the Rock Gardens to see if the earlier hot spell had brought the White Letter Hairstreaks out. It was a bit blustery and their favourite tree was being tossed around so we didn't hold out much hope after half an hour we gave up and went around the rough fields to see what else we could find - not a lot was the answer. but we did get great views of this hoverfly holding territory in the lee of the big trees at the edge of the park.
Back at Base Camp the first juvenile Blackbird of the season turned up. Rather late, either a second brood and we'd missed the first or the first broods failed when it was so dry that the adults couldn't get food. 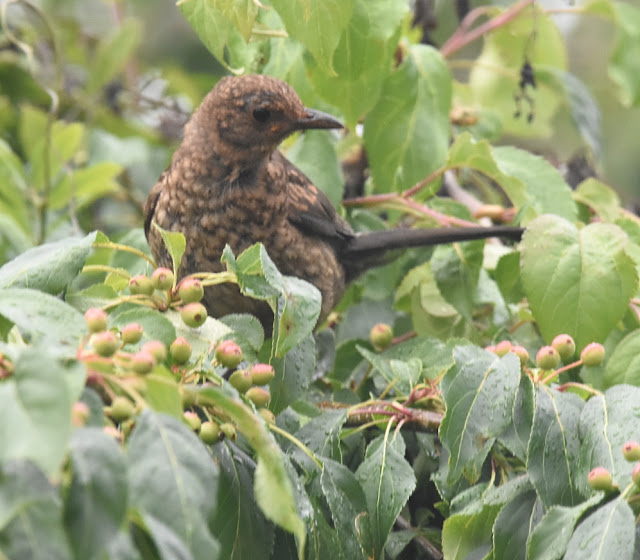 In poor weather the driest, cleanest place to walk the mutt is along the cliffs where there is far less opportunity for him to become a mud-mop. So far this year we've not had much success with Grey Seals so it was a nice bonus to have one bottling not too far offshore although another 50 yards closer to the lens might have been better - can't have everything that'd make us spoilt and no-one like s a spoilt brat! 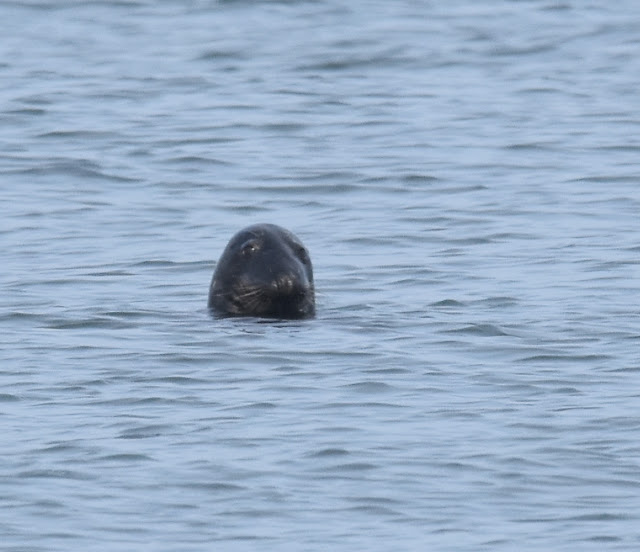 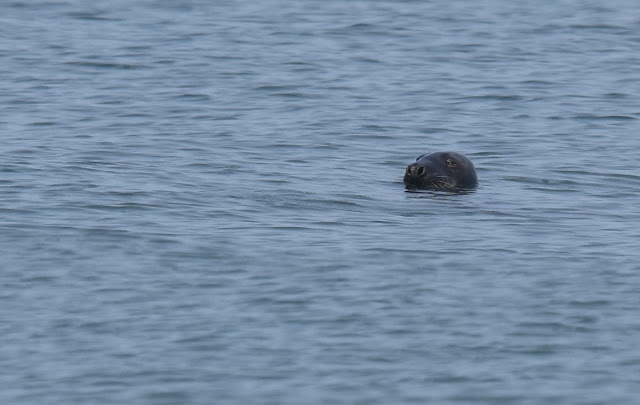 With Lockdown restrictions easing still further we arranged to meet CR for a mooch round Marton Mere. Gee it's different (good/better) in the summer when the dreadful caravan site adjacent is closed, no numpties, far fewer dogs around and no booming music from the clubhouse.
A good selection of wildlife was enjoyed
A species we had hoped to see well and until now had had only fleeting glimpses, nothing to point the camera at was the Reed Warblers. But from the Fylde Bird Club Hide we were entertained by a family flitting around the reedbed for about half an hour, just great to watch. 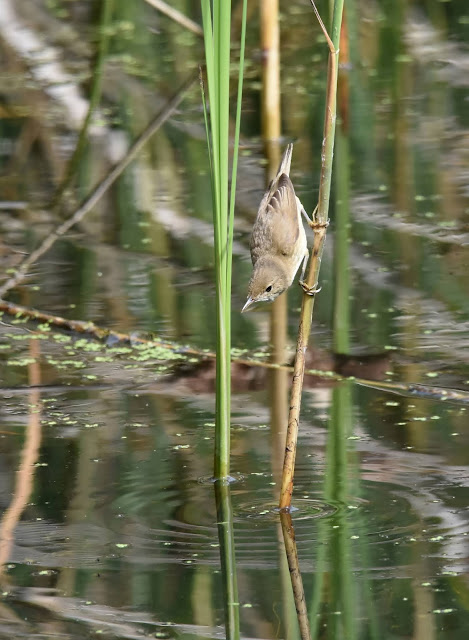 We left the Reed Warblers to their business and carried on the circuit. After a few yards C says look at this...there was a small mammal we assumed (never assume nothing!!!) was a Short Tailed Field Vole. We fired a few shots off but even the best one's not that brilliant but does show a pointy nose rather than a blunt one so it's a shrew not a vole and from the tail length it's a Common Shrew (PYLC #157). Not a species we expected to see out in the open and certainly not one we'd have expected to add to our challenge tally. 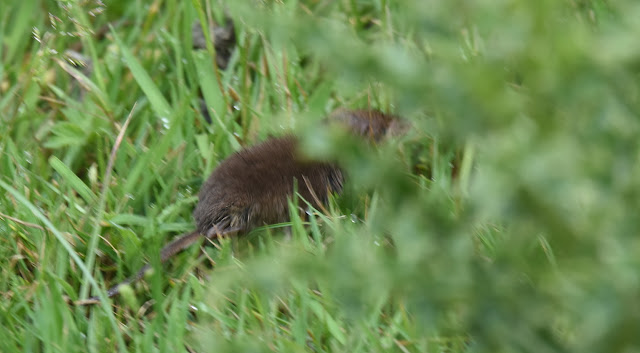 Further on still we could hear nearby Cetti's Warblers but as usual they were all doing remarkably well at staying hidden and out of camera sight. While waiting for a particularly loud and therefore close one to show - it didn't - we spotted this awesome nest of Peacock butterfly caterpillars. 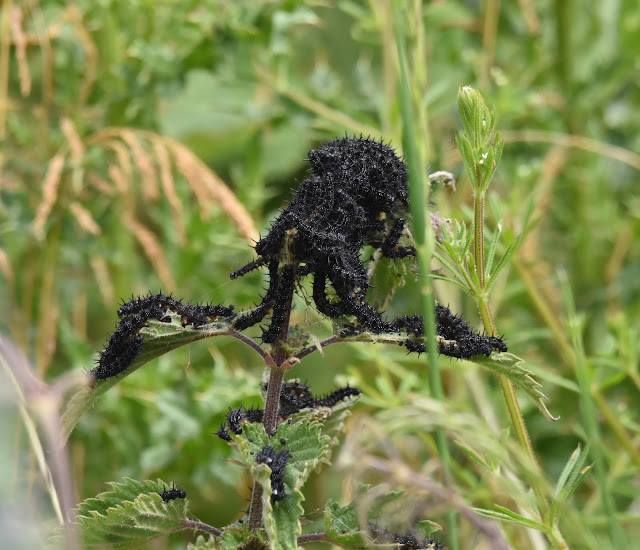 For the final week of June the weather was more like March although we did get a couple of hot days (see previous post about our safari to Lunt Meadows).
First up we headed back out to Marton Mere inspired by our previous visit. This time it as much duller and much quieter. we'd got half way round before we'd come across anything to point the camera at and when that happened it was at this very distant but still lovely and brightly coloured male Linnet. 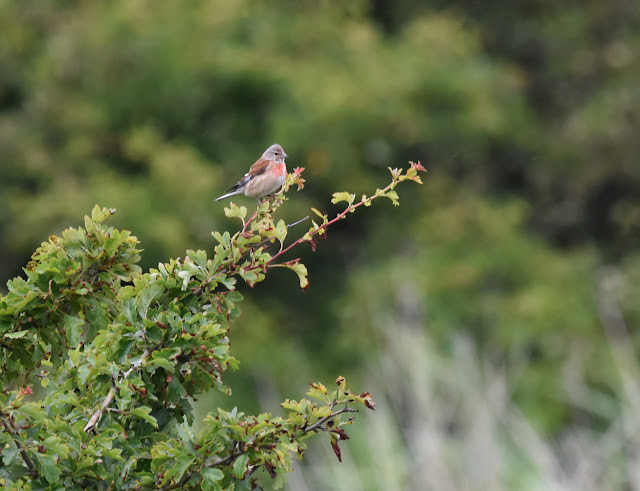 Nothing else made it on to the SD card, which has got to be a record, there's always something worth pointing the camera at there.
The following day we were back, this time with CR. We'd hardly left the car behind when we came across this very confiding Sedge Warbler. he was totally oblivious to our presence flitting from song post to song post and giving a us a chorus of his extensive and loud repertoire. 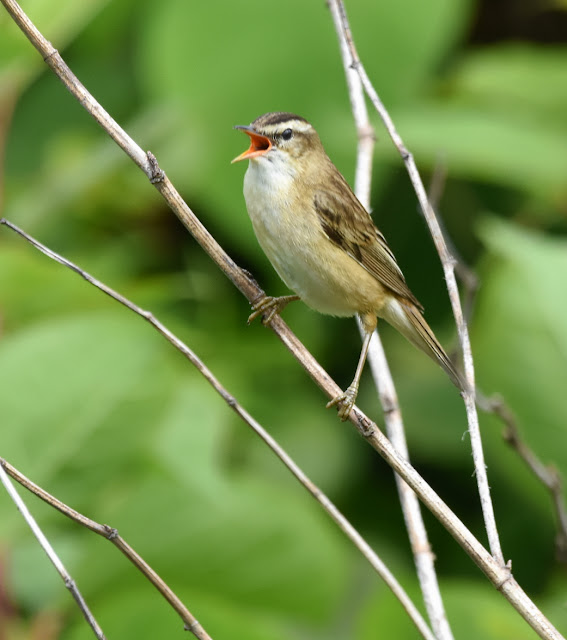 A few Swifts were about too.

But again the weather wasn't conducive for a lot of the wildlife to be on show, particularly the invertebrates.
Back at Base Camp we tried a different tack with the mealworms trying to entice the local Starlings to come into the garden. no Starlings just this brute polishing the mealworms off in a matter of seconds again. We're sure he can smell them, there's no sign of him when we put them out but within a matter of minutes he's turned up. 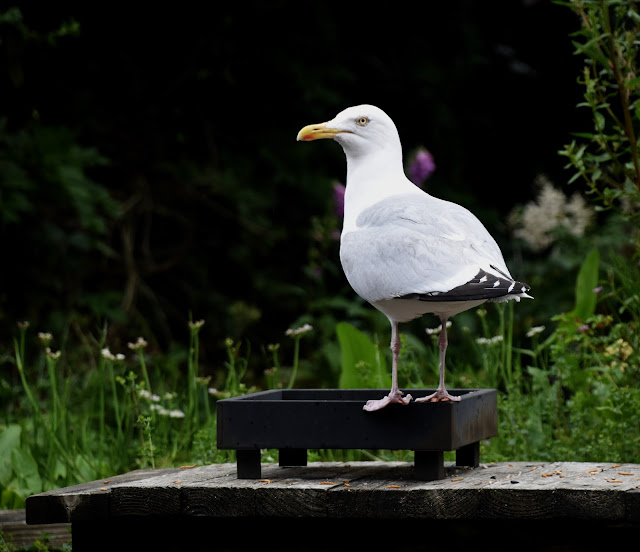 An early morning dog-walk round the rough fields at the Rock Gardens had us see some ginger movement close to one of the big Bramble thickets. We only had our phone with us at that time of the morning and were very surprised that the Fox sat and watched us fumble in our pocket for it, turn it on and point it in her direction AND the dog was sniffing around very excitedly where she had been only moments earlier. We had to use full zoom and couldn't see the screen for the low early morning sun  hence the rather grotty pic. But hey it's identifiable (just) so goes on our Challenge tally as #158 - Result 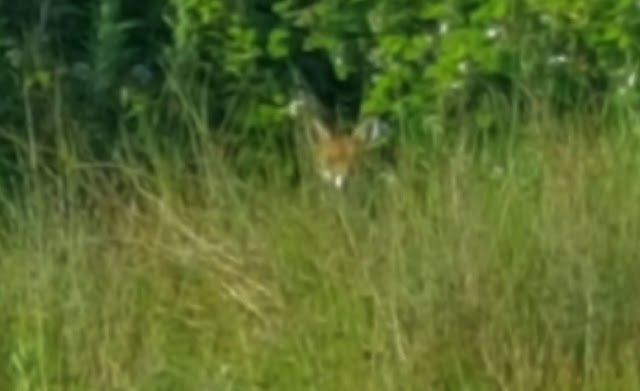 And so ended June.

Where to next? Well the rain continues into July but we've already got a few wildlife moments to share with you next time.

In the meantime let us know who's sitting still watching in your outback
And don't forget to stay safe and socially distanced.