After another week of rain and rubbish weather we hoped that today’s forecast of a decent morning would be accurate.
On the drive towards Oakenclough a hint of sun broke the early clouds. At 0630 roadside trees hardly stirred. This was all too good to be true. And so it proved.  For the next four hours Andy and I dodged periodic drizzle and showers that blew in from the west until we packed in at 1030 when light rain turned to a heavy wetting shower.
Had the sun stayed around longer we felt sure that our catch would have been higher as despite the cool showers and grey skies, there seemed to be good numbers of birds moving through the area. Between the drizzly showers came post-fledging parties of Nuthatch, Chaffinches, titmice and Swallows. One of these moments brought in a Hobby that gave a rapid fly past before heading south east and out of sight. A birder who lives not far away reports seeing a Hobby every day of the week.
Given the stop-start nature of proceedings we were quite pleased to finish with 28 birds of 13 species – 24 juvenile birds of the year and 4 adults - 8 Willow Warbler, 3 Chaffinch, 3 Coal Tit, 2 Chiffchaff, 2 Blackcap, 2 Treecreeper, 2 Great Tit and singles of Goldfinch, Robin, Wren, Blue Tit, Goldcrest and Garden Warbler.
Pictures below - all taken at ISO800/1600 in poor light yet again. Whatever happened to summer? 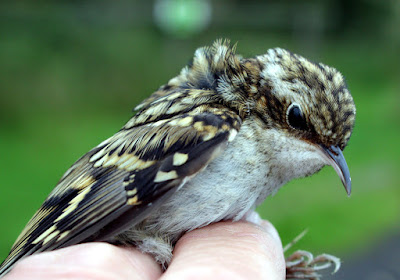 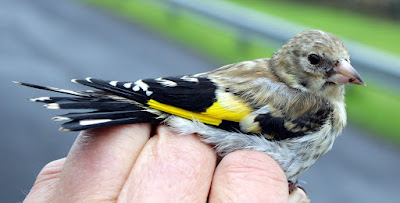 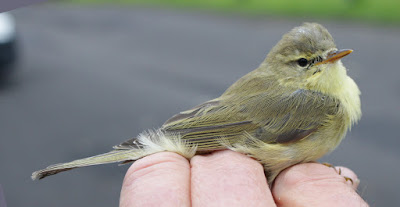 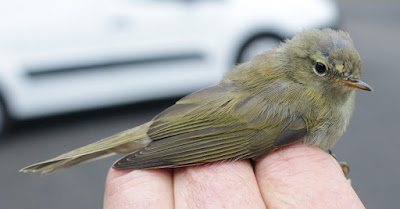 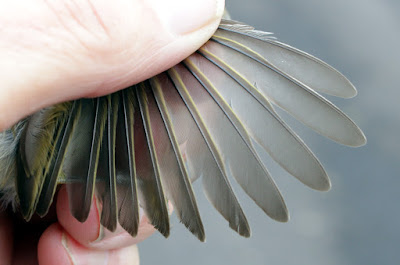 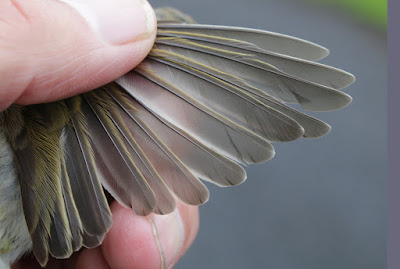 Wing of Willow Warbler
The differences are easier to see from the drawings in my 1984 dog-eared edition of "Svensson". But the facts remain the same in 2020. 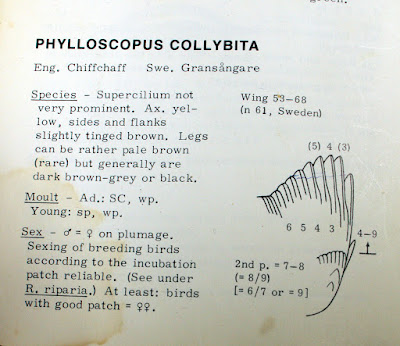