The Safari hasn't been far for a while, Not because of lockdown or anything like that it's just that the weather has had us more or less confined to barracks apart from the usual dog walks.
The garden hasn't offered up many bird photo opportunities but it's been good to see the male House Sparrow returning on an almost daily basis. For some reason he doesn't bring his mates from the front but they are making significant inroads into the sack of millet we bought for them.When he flies from back garden to the street to join his chums he goes past our sparrow 'terrace' nest box, we can only hope he's made a mental note that it's there for next year - it's been a couple of years since we've had nesting House Sparrows in the street. 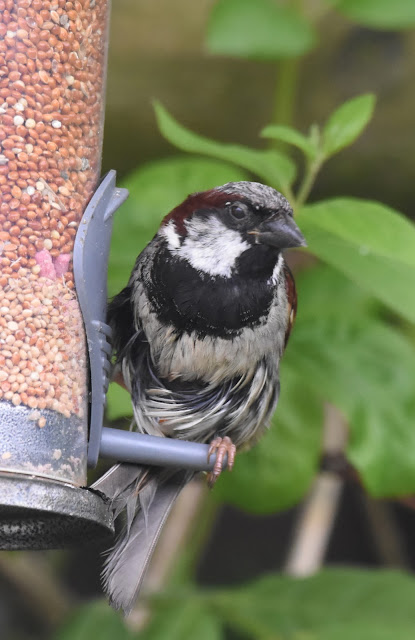 We've had a bit of joy with the moth trap on the nights when it hasn't rained although we did put the trap out one night when rain wasn't forecast only to wake up in the morning to find it had rained and a new bulb and resetting the outdoor electrics were required.
We've had reasonable numbers of the more common species such as Rustic and/or Uncertain, Common/Lesser Rustic, Dark Arches, Large Yellow Underwing and Heart & Darts. But we;ve had a few scarcer species too including a couple of 'New for the Garden's like this Eucosma hohenwartiana, more to do with Black Knapweed than Harry Potter. 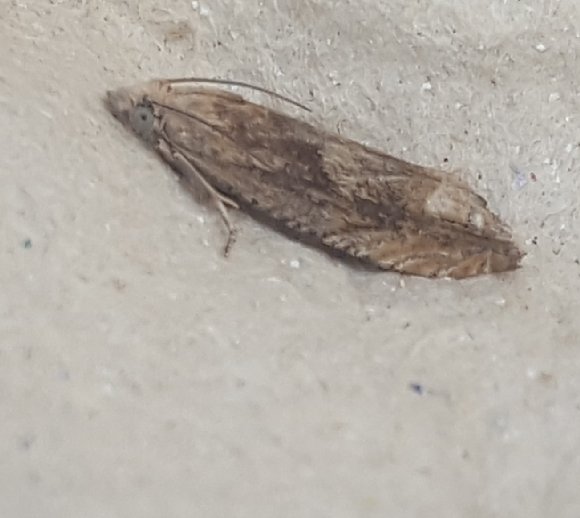 And this rather dapper Pine Shoot Moth. Some of the micros are really stunningly coloured and marked it's a real shame the're not a bit bigger so that more people might appreciate them. 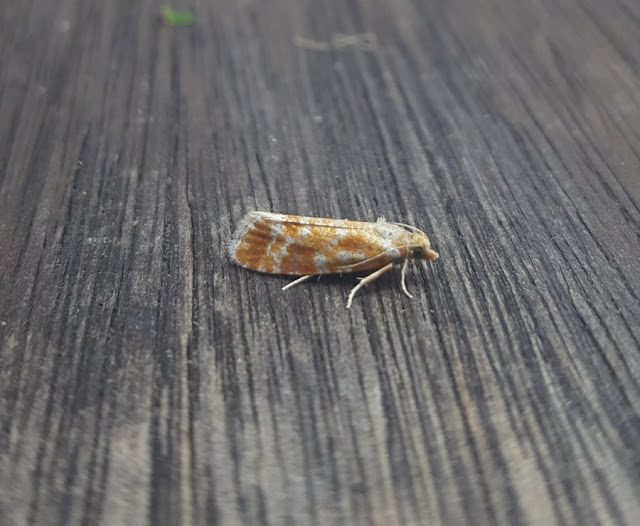 Small but perfectly formed, indeed smaller than some micros but still a macro moth is this Lime Speck Pug, a species we only find in the trap every few years or so. 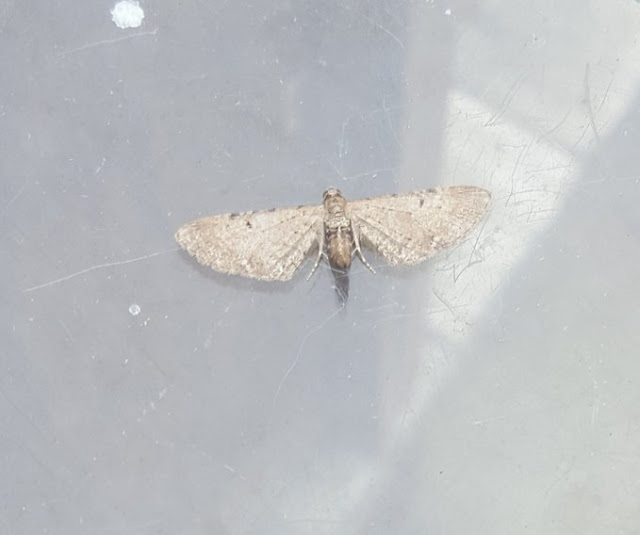 Small Angle Shades is always a nice one to wrangle out of the trap. 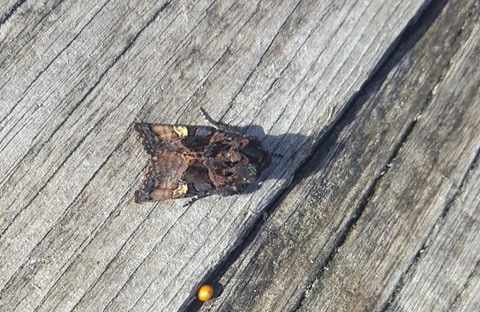 However, easily our best looking moth so far this season is this Pebble Prominent. 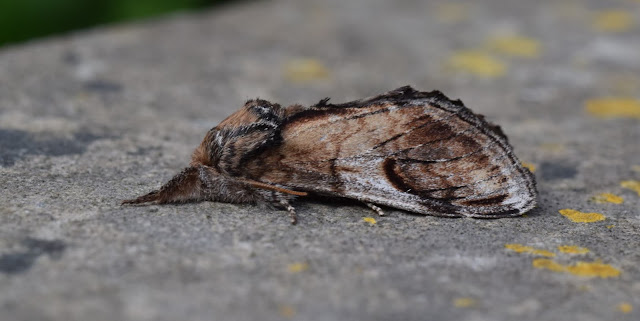 We've had a couple of looks for the local White Letter Hairstreaks on the few occasions when the weather has been promising both with and without CR but certainly without much success. We'd had a couple of early looks with no joy and then saw that good friend PL had managed to get a lucky pic of one down on the Brambles beside the track. Our only success was during a camera-free dog walk on a warmish but windy day when we saw one briefly high in the usual tree.
Our rambles around the site with CR have given us some butterflies and other interesting insects though.
The top Small Skipper had us going for a few seconds, well someone has to be first to find an Essex Skipper locally. But the angle of the scent brand is wrong and there's probably not quite enough black on the antennae tips and you can't see the underside anyway.
The Dung Fly is interesting as it's very common everywhere but totally under recorded in our area according to the national maps. As no doubt many other flies are.
We've also had a few dog walks along the beach - it's the driest place to take the dog when it's raining! Some good finds too.
We had a meet up with LW to have a look at the rockpools at South Shore. We were hoping there would have been more of us for a socially distanced womble but in the end only she could make it. Again we had some good finds and indeed the Spotter's Badge went to L as she found one of the only two (as far as we're aware) Blackpool Limpets. 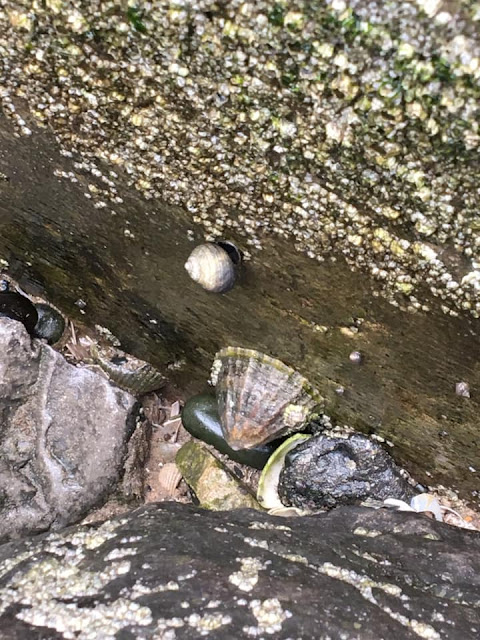 There were lots of Beadlet Anemones 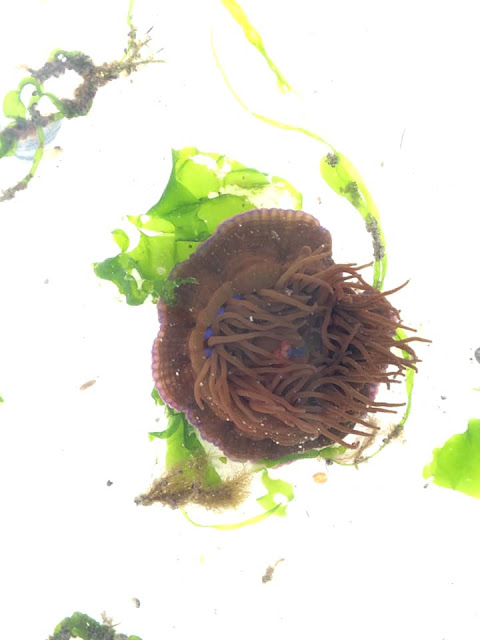 But we could only find a couple of decent sized Green Shore Cabs. Although to be fair there were masses of Common Prawns and Brown Shrimps, so many shrimps that we don't think we've ever seen so many up by the seawall. 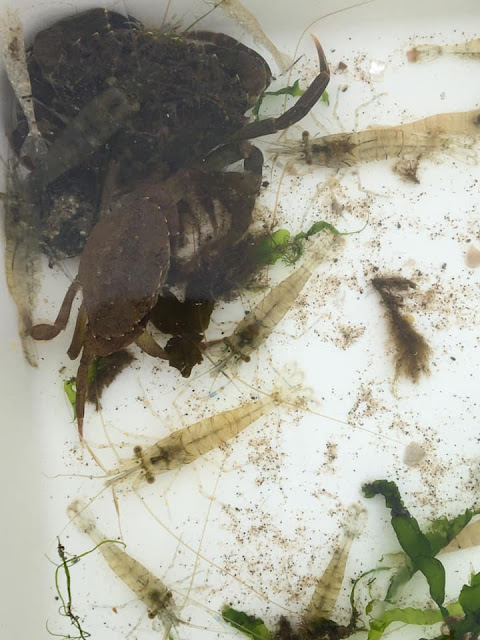 Squid eggs were a bit of an unusual find but they have been reported by others on Facebook further north along the coast and in much bigger clumps than this one. 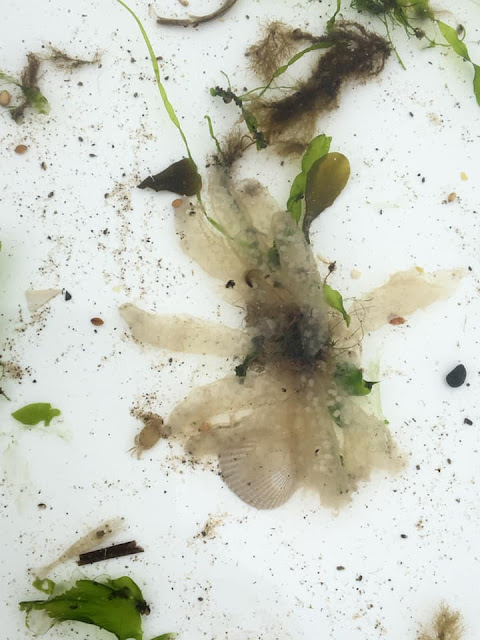 We also got a couple of fish for our Photo Year List Challenge
Sadly we couldn't catch what looked like a Smelt which would have been a great find if confirmed and as usual the few Sand Gobies managed to avoid our nets. Never mind it was a cracking hour and a bits afternoon entertainment and good to have company too.
Diurnal garden invertebrate wildlife has been few and far between with the weather turning iffy. Activity at the Bee Hotel has quietened down and apart from a few Bumble Bees only this Leaf Cutter Bee has been of note..
The Field Scabious has proved the most popular of our plants. We've hardly seen any Small Tortoiseshells this summer but this one stayed around the garden most of the afternoon. 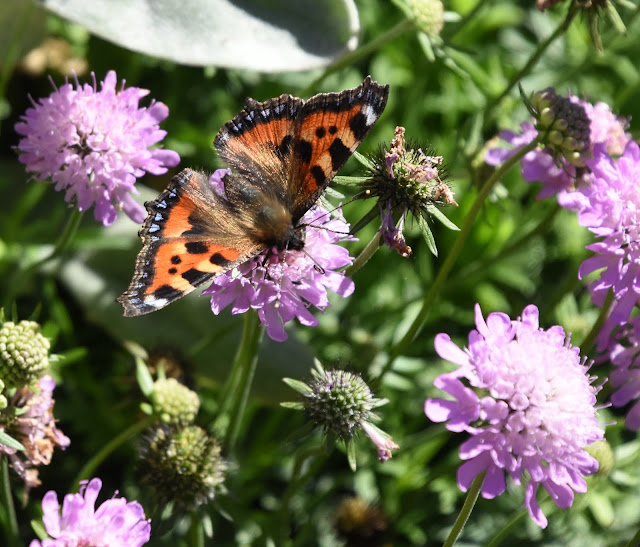 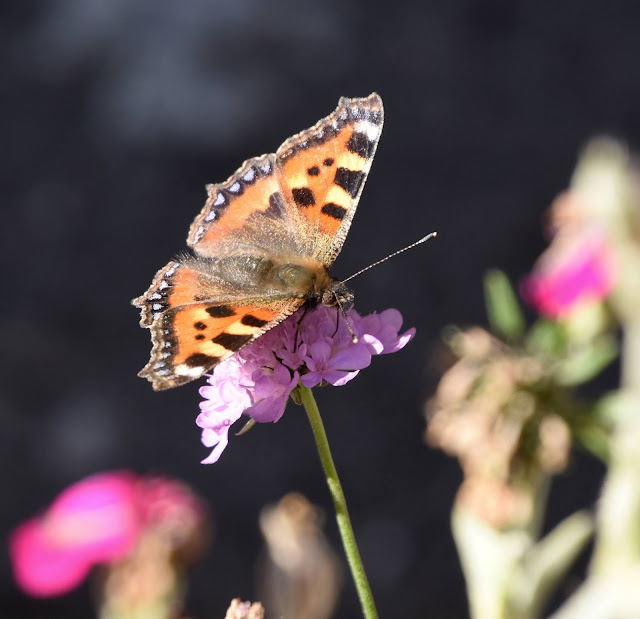 Hoverflies too have been rather thin on the ground or should that be in the air. The Field Scabious came up trumps again when this one colloquially known as The Footballer due to its stripy thorax turned up for a good old slurp of nectar. 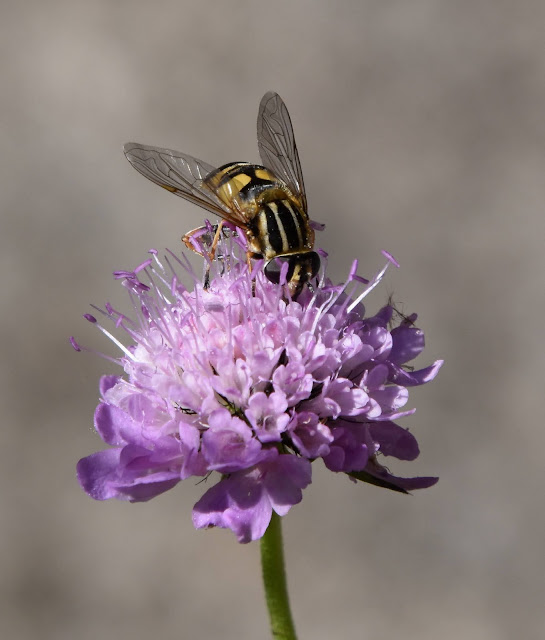 A short overnighter to deepest darkest Yorkshire found us staying at a pub which the literary veterinarian James Herriot spent his honeymoon. We'd read all his books well before the TV shows came out. 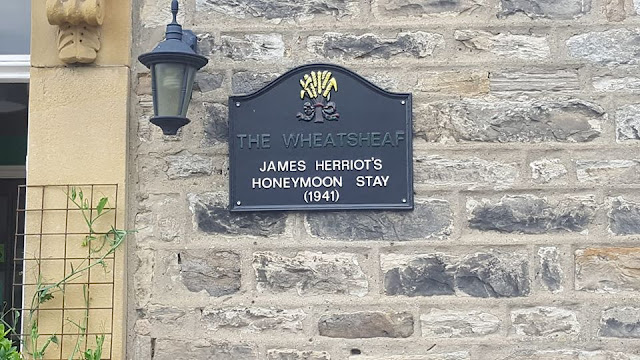 Over the road tucked in a weedy patch behind an old barn lay this rotting Field Marshall tractor, it's possible said vet saw it in action on his rounds in the late 40s/early 50s 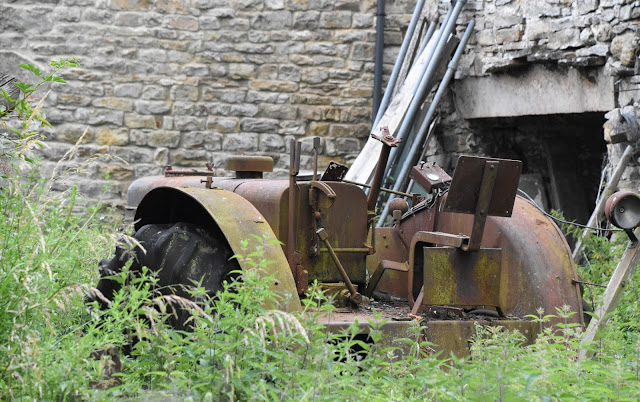 The weather was mostly mizzle and drizzle and we didn't have much tme for wildifing although we did see our first bats of the year - yes it's taken that long for us to see a bat - they've sadly totally disappeared from around Base Camp. We also got a lucky Red Grouse (PYLC #163) when one walked across the road right under the bonnet of the car up on the moorland road twixt Wensleydale and Swaledale. 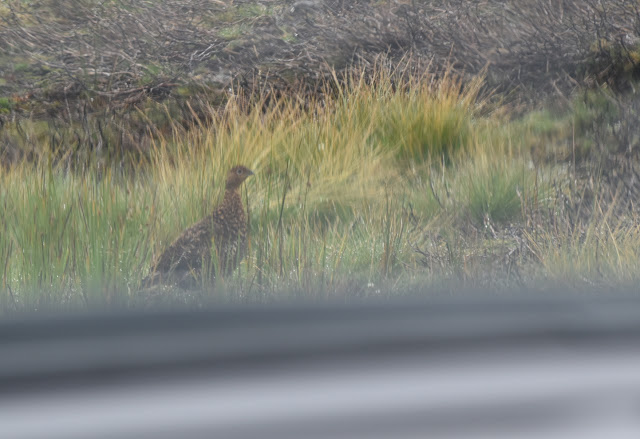 Luckily it didn't fly off as we coasted to a stop. 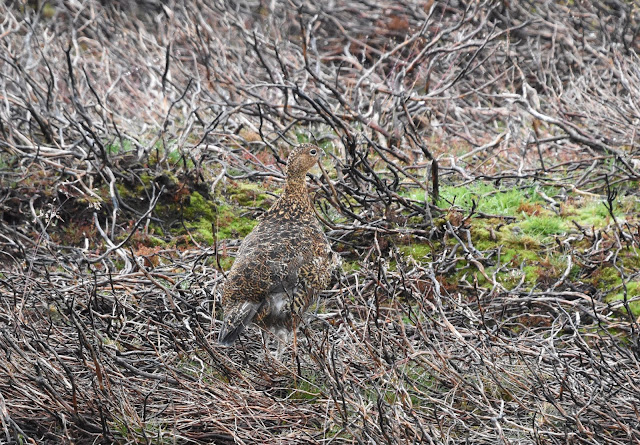 For pics of the lovely scenery visit our Flickr page
And finally we had a jaunt out with CR to look for the Purple Hairstreaks at Singleton churchyard. They were active in bouts but mainly stayed high up in the tree tops making getting any pics hard work. We only got one record shot that was almost in focus. 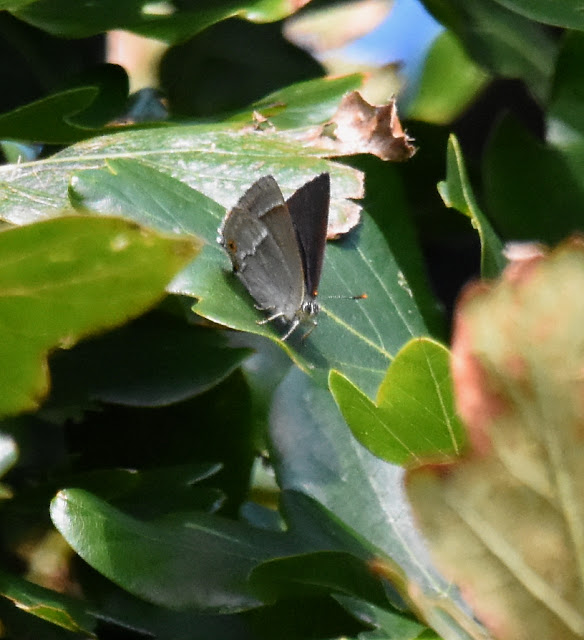 Good to see but a quick look for the White Letter Hairstreaks a short way further down the lane was unsuccessful.

That's it for now...and we thought nothing much had happened in July!

Where to next? We've got some beach work lined up and a further flung safari next week.

In the meantime let us know who's having a purple patch in your outback.

And don't forget to stay safe and socially distanced.