The Safari was given the opportunity to join CR on a socially distanced trip up to our favourite reserve in south Cumbria. The weather was a bit iffy on the drive up but we were hopeful it would improve by the time we arrived. C informed us it was exactly five months to the day since our last pre-lockdown visit in some ways it didn't seem that long ago but in others it seemed an age since we were last there, either way it was great to be back even if all the facilities aren't open yet.

We were after anything with scales and some exciting invertebrates and hopefully some of the special birds that can be found there. Taking the trail across the moss the weather was obviously beating us as we saw nothing with scales, hardly any invertebrates, an no birds apart from a couple of juvenile Great Spotted Woodpeckers and hearing a Wren, the woods were deadly quiet all the 'good birds', the Redstarts, Spotted and Pied Flycatchers seemed to have moved on.

By the time we reached the bridge and had a look down the wildlife devoid stream we decided not to go any further but retrace our steps back to the car and try another venue. However, once we'd reached some open ground a white dot near the Osprey's nest caught our eye and a scan with the bins revealed it was indeed one of the Ospreys - very distant but a welcome addition to our Photo Year List Challenge at #170 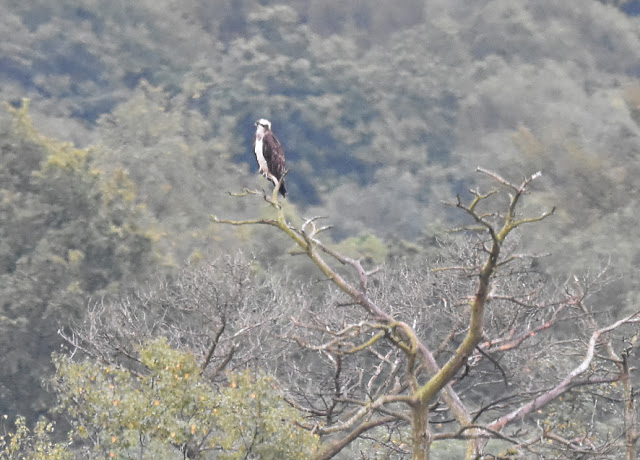 The return walk gave us nothing else, everything was very very quiet. So off we went on a short drive to a site we've not visited for many years Meathop Moss. By the time we'd reached the reserve the sun was trying to break through and the mercury had climbed a couple of notches up the thermometer. The difference was immediately noticeable with Speckled Wood and a couple of white butterflies flitting along the access track. We did a couple of laps of the boardwalk trail picking up plenty of Black Darters particularly on the second round. Unfortunately we only spotted one other dragonfly which was probably a Common Darter. 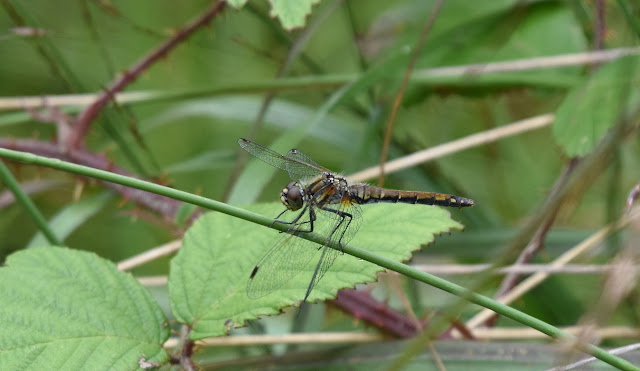 Somehow we noticed several bumble bees but neglected to take any pics which on reflection was probably a mistake as they could well have been Heath Bumble Bees and Bilberry Bumble Bees. There weren't many butterflies about just a couple of Small Tortoiseshells and towards the end of our second lap only our second Green Veined White of the year - how have we managed not to have seen more than than that? 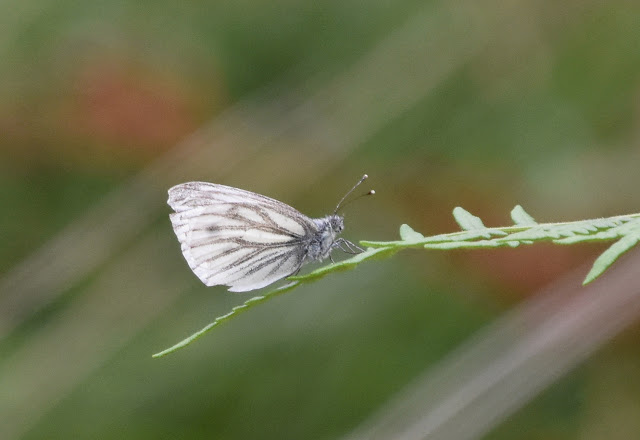 It was good to see so many Common Lizards too, shed loads of them and better still about three quarters of them were juveniles. Almost all of them were spotted on the edges of the boardwalk apart from from these two that were upto no good in the grass just off the edge of the woodwork. 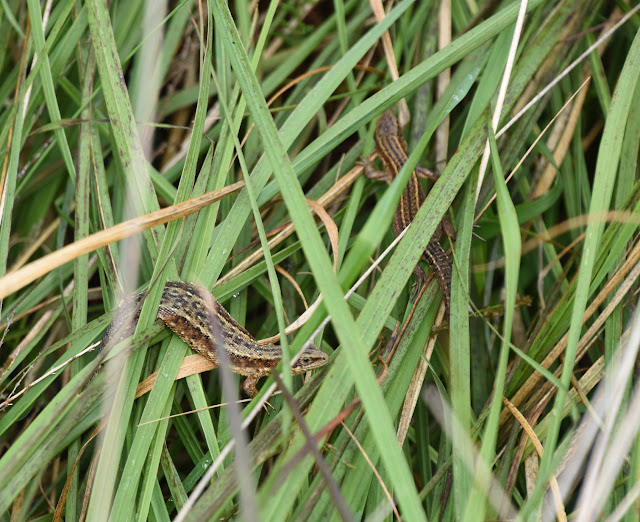 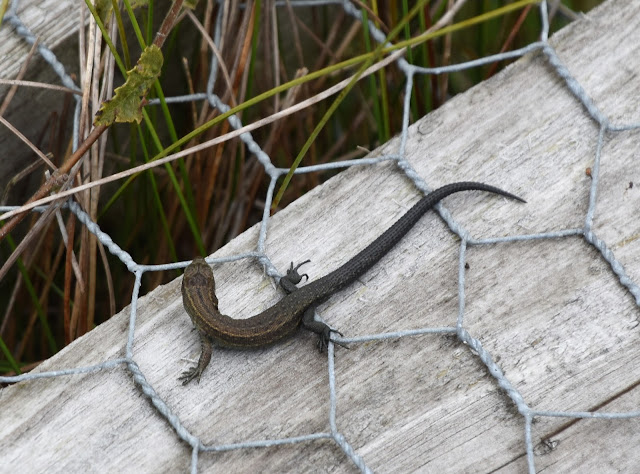 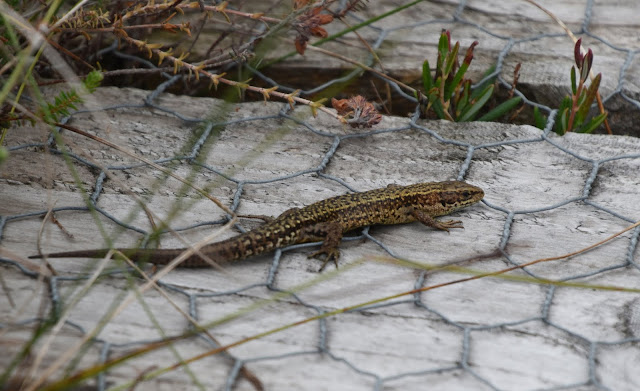 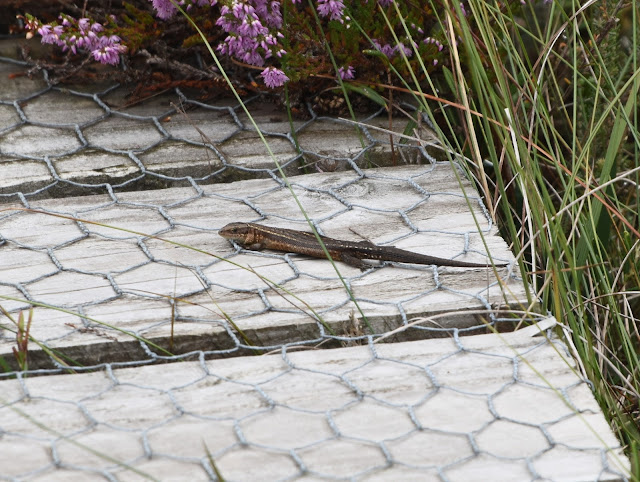 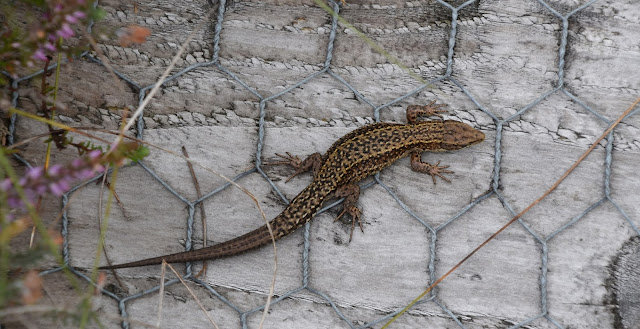 The spiders, later identified as 4-Spotted Orb Weavers, were having a field day catching hoverflies mainly the stripy Footballers but C spotted a right dobber soaking up the heat from the boardwalk, a local speciality a Common Bog Hoverfly, Sericomyia silentis. 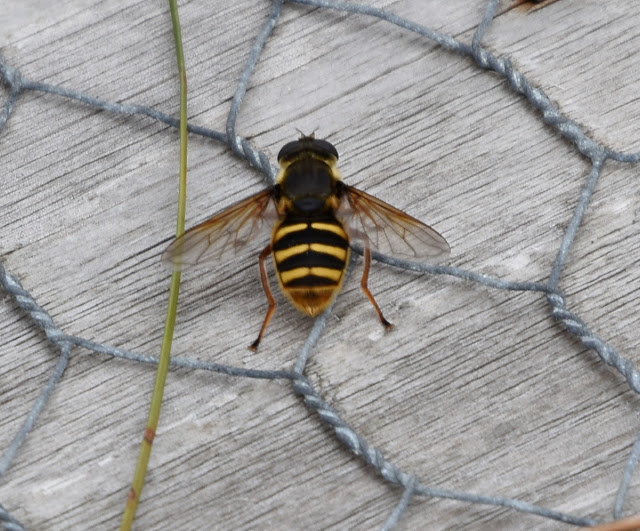 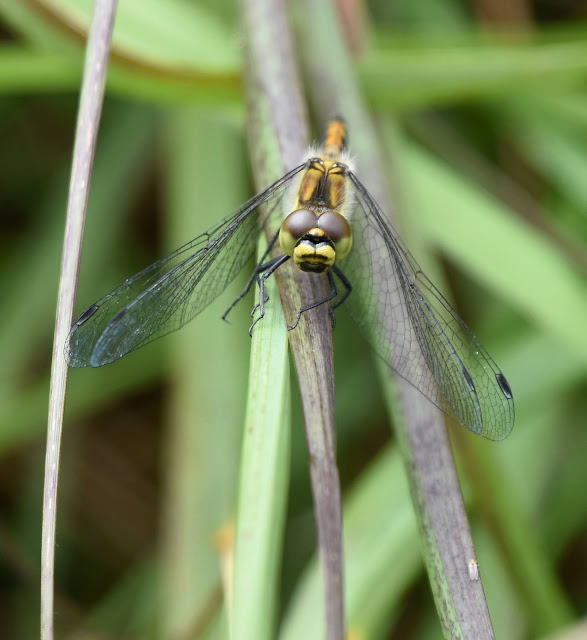 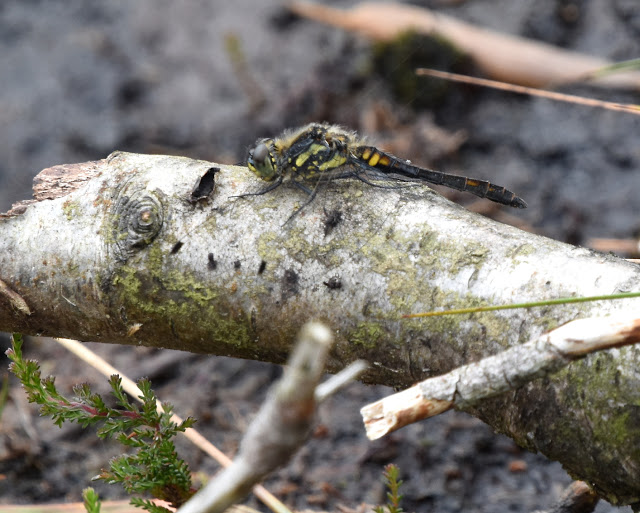 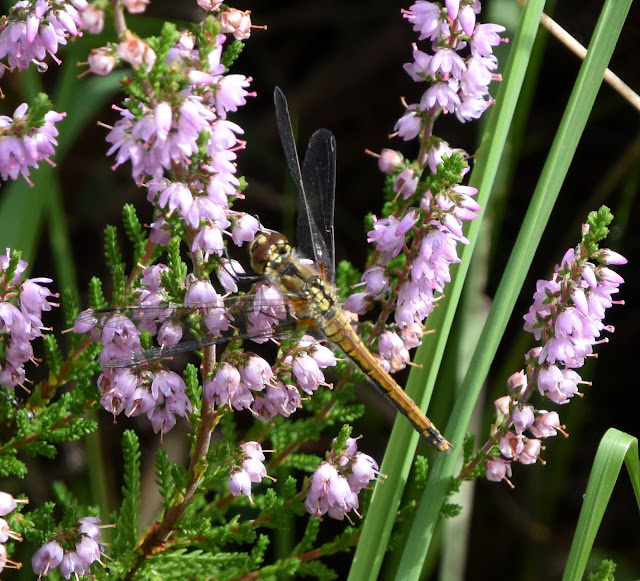 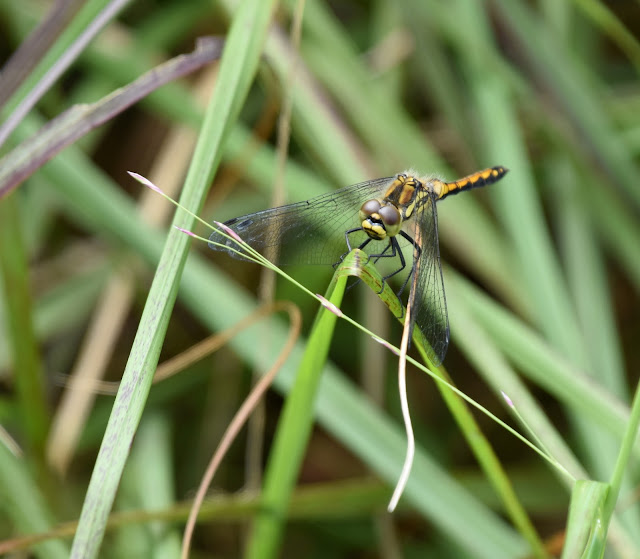 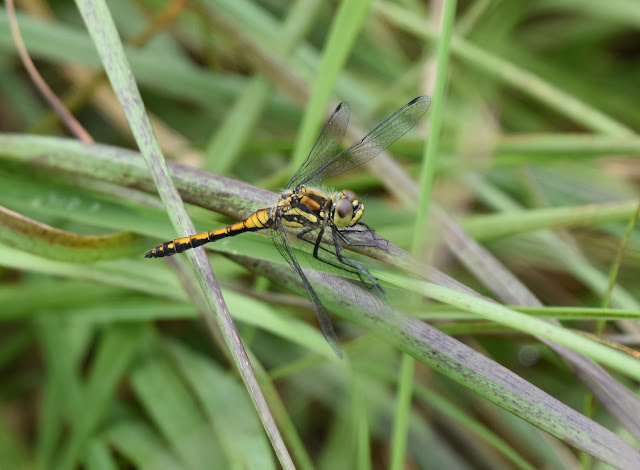 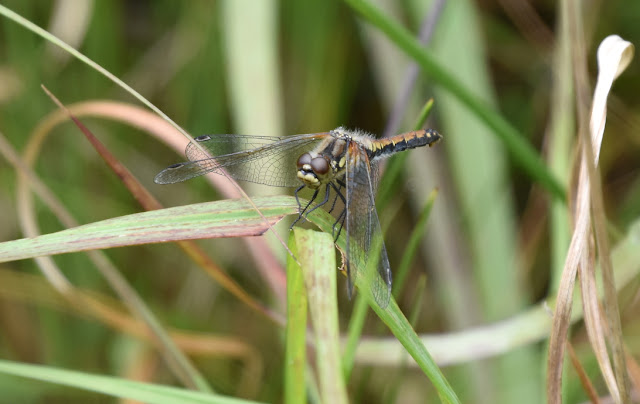 A quality true bug was spotted too, a Spiked Shieldbug. 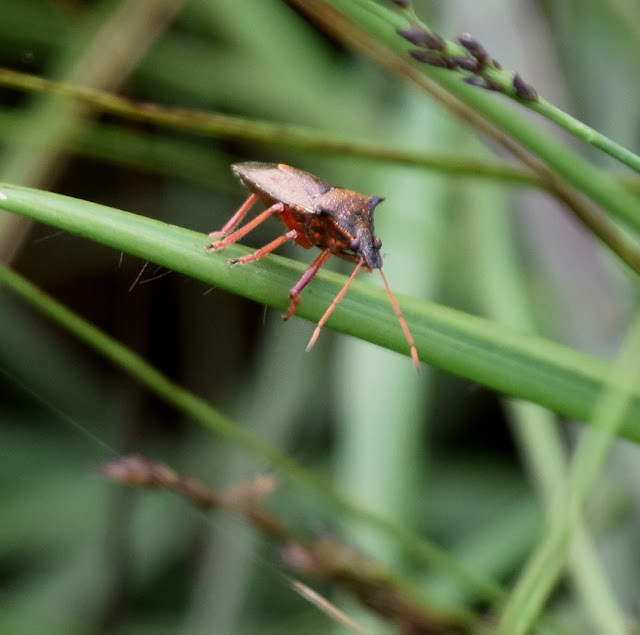 After exhausting the possibilities at Meathop Moss and failing to bump into any of the apparently numerous Adders we decamped to another site to see if we could to see any butterflies, Latterbarrow,

A bit of sunshine had a few more Black Darters on the wing including this one which settle very close by. 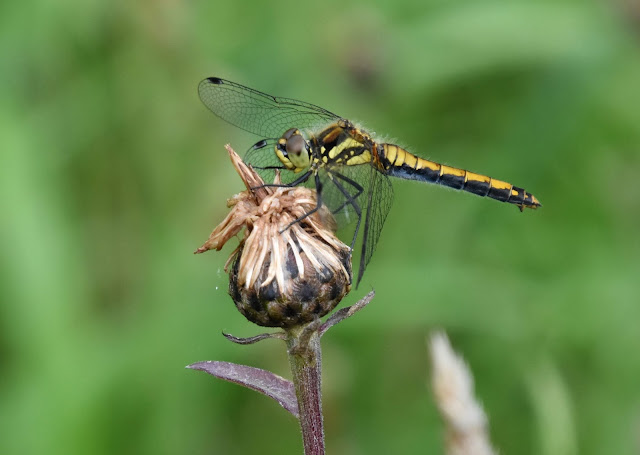 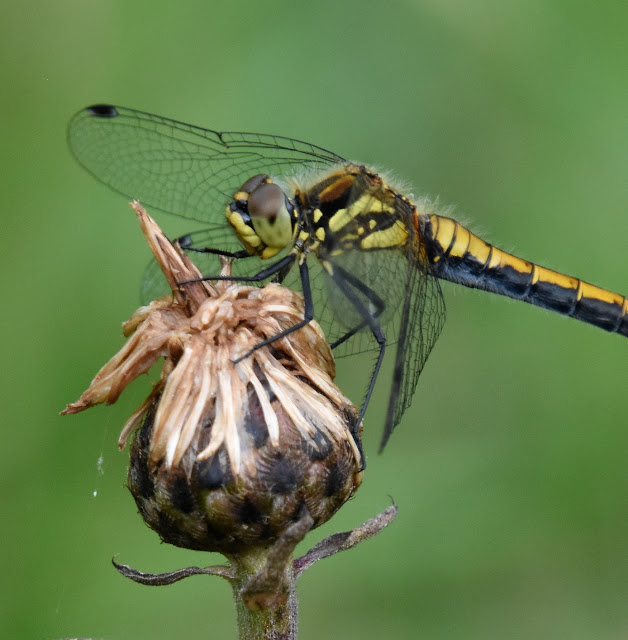 An interesting bee mimicking hoverfly was seen. One of the forms of Volucella bombylans? 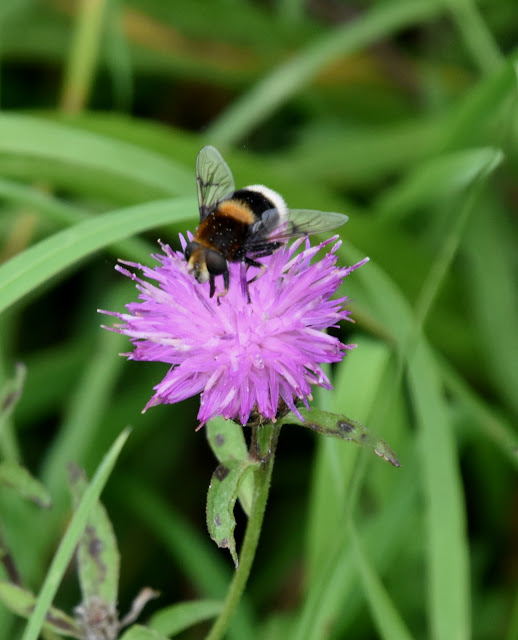 Despite the warmth there were few butterflies on the wing, one of the few was this tatty Meadow Brown. 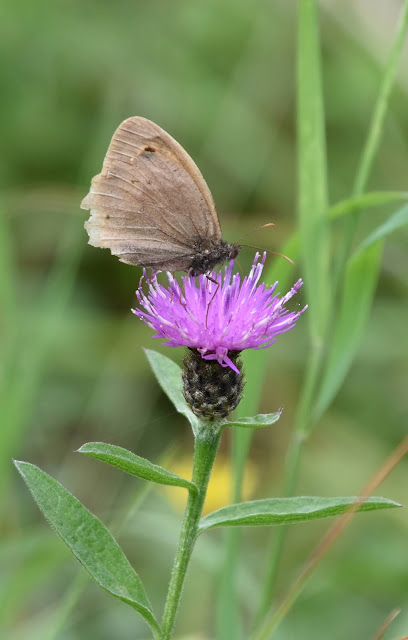 A bumble bee gave us a bit of a headache but turned out to be 'just' a male Red Tailed Bumble Bee all be it a somewhat faded one. 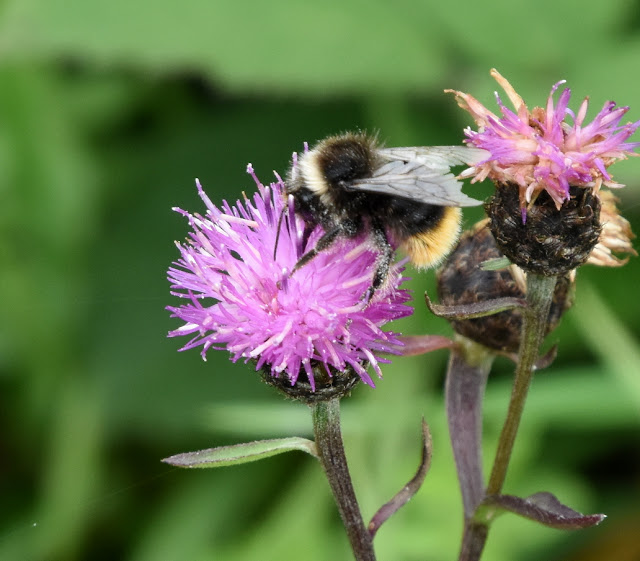 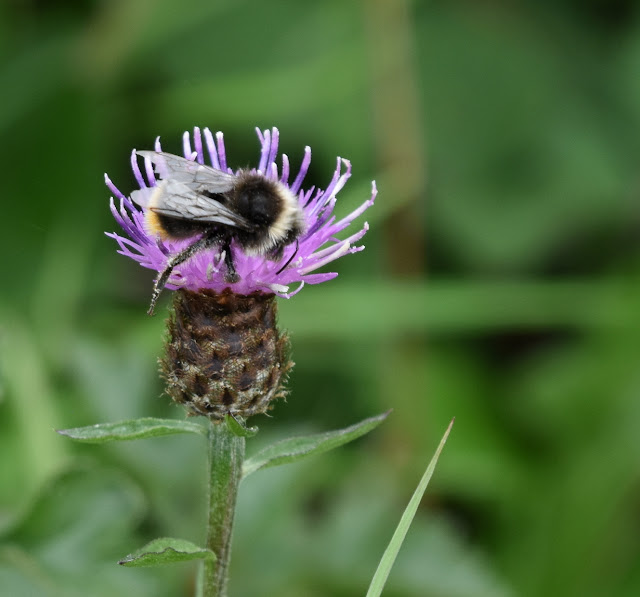 After finding little else, although a probable Southern Hawker dragonfly sped round but wouldn't slow down enough to give us a confirming view, we called it a day and headed back to the motorway. One last stop, a new site for C and one we've not been to for several years, a bit of a waterfall/rapids that on its day can produce leaping Salmon. We only stopped a few minutes noting that the water was very high and with drains issuing sheets of water over the slippery rocks meant we couldn't view the bottom end of the rapids. Well worth another visit and a longer one at that! 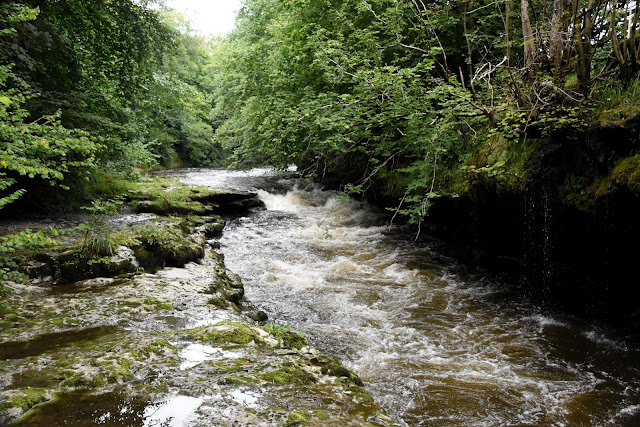 We'll leave you with that wet n wonderful image.

Where to next? Another safari coming up, this time to the south again. And maybe a bit of a rant too...

And don't forget to enjoy your local wildlife - it's good for you you know. Keep safe - maintain your social distancing.