The Safari met up with the South-side gang for a bit of wildlifing and good old fashioned banter at Martin Mere WT reserve a few days ago. As we passed through Infection Control and out into the wilderness beyond the first thing we spotted was a family of young Mallard ducklings snoozing in the grass by the path with eh-up muvver watching over them a couple of feet away. As cute as buttons they were. And not the only brood of young ducklings we saw either. 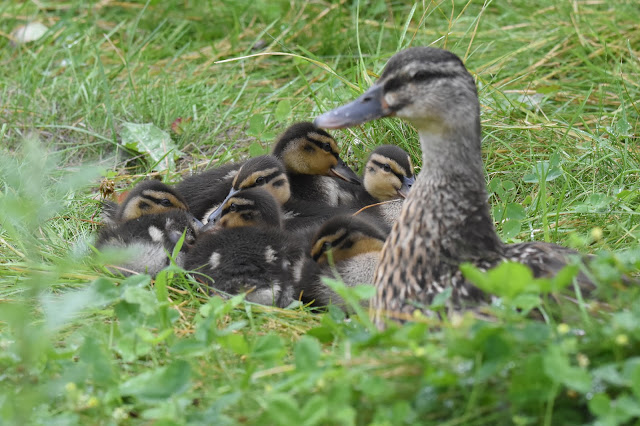 From the Discovery Hide the in-your-face cool wind meant everything was on the far side of the pool trying to take advantage of whatever shelter they could find.  As usual there was a bit of a Black Headed Gull flock thing going on but that part of it we could see held no Mediterranean Gulls.

There were a couple of Common Sandpipers footling around on the muddy edges and a Green Sandpiper came in to view briefly as did a Ringed Plover. So we decided to wander round that way to see if we could get closer views and inspect more of the gull flock.

The gulls were now nearer and broadside on so making checking for odd-ones-out a lot easier not that we could find any and to make matters worse the Ringed Plover and sandpipers had done a bunk too. 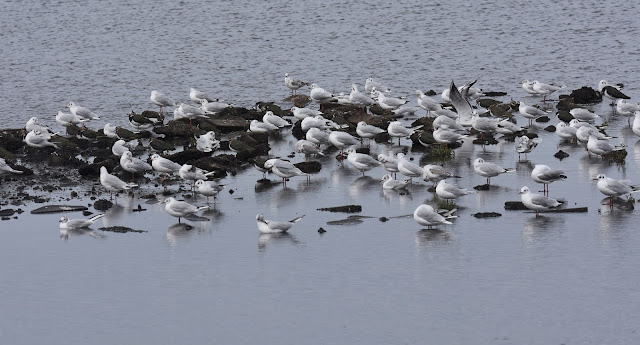 The gull flock did hold a few sleepy Lapwings, always good to see this lovely bird and this year they seem to have had a good breeding season, at least in this area, with plenty of local sites reporting good numbers. 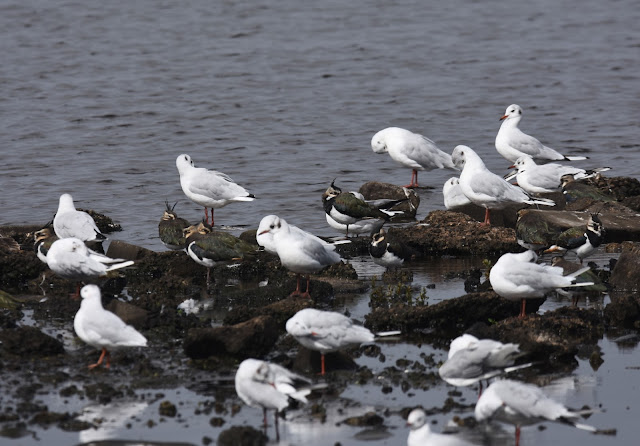 A quick stop at the Feeding Station was quiet to start with and no sign of the stars of the show, the Brown Rats. Slowly birds started to return to to the feeders, Goldfinches and Chaffinches and a couple of Great Tits but as numbers built a little male Sparrowhawk belted through like greased lightning scattering all and sundry. It was that fast we must have blinked as it was going through as we totally missed it and right under our nose it was too!
A quick look from the Harrier Hide gave us lots of Gadwalls and an unlikely 'family' of a pair of Little Grebes with a young Great Crested Grebe sat with them.

With not great deal on offer A had spotted a new construction off to the right he'd never seen before not having visited for quite some time. It was the new hide - "How on earth do you get out there?" he asked. Easy-peasy walk this way...Turned out it was a good move rain came down heavily on the way keeping all others away and giving us an empty hide to enjoy our lunch and some stunning views of a Marsh Harrier as it swooped low over the water disturbing Lapwings, Black Tailed Godwits and a lovely wisp of about a dozen or so Snipe. 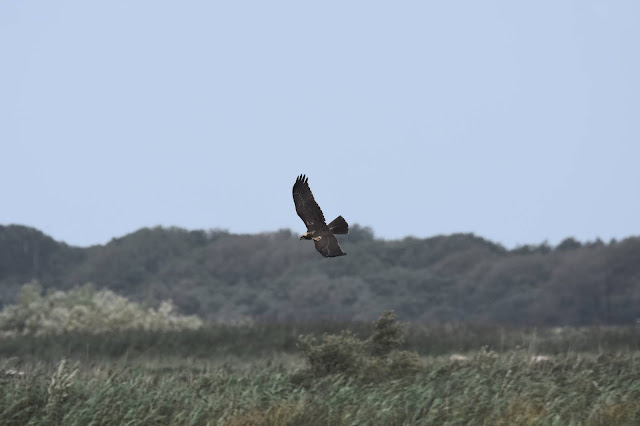 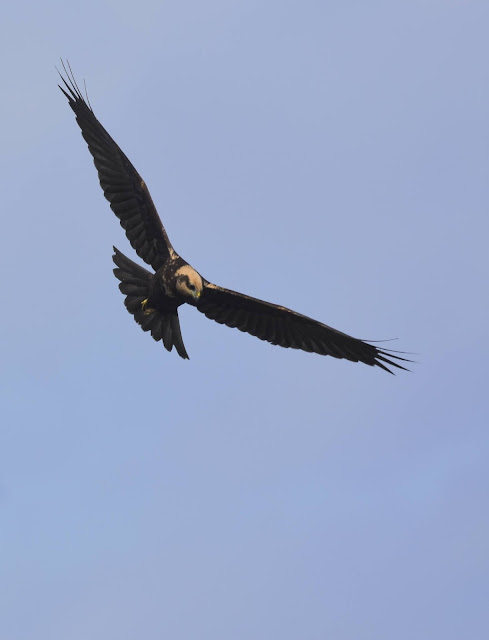 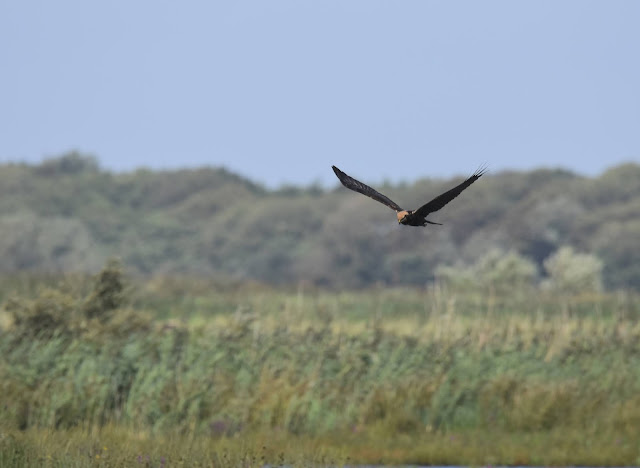 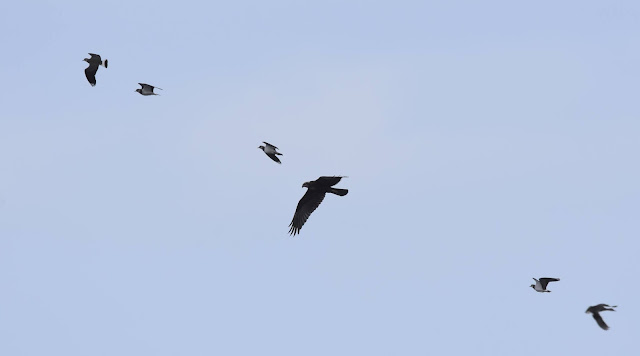 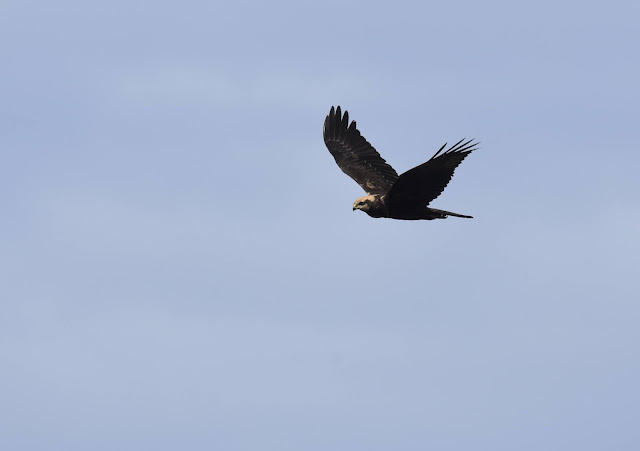 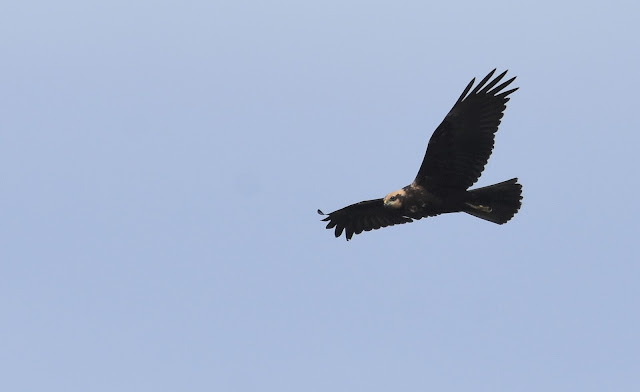 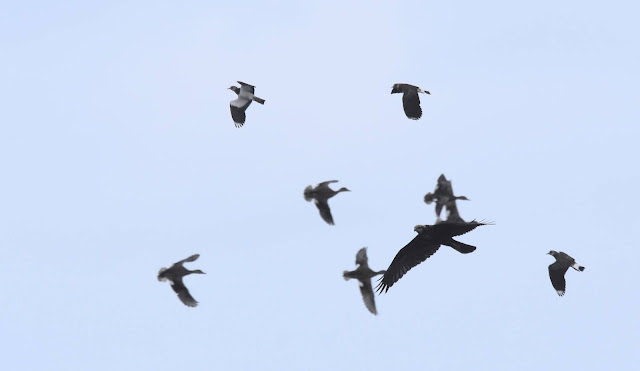 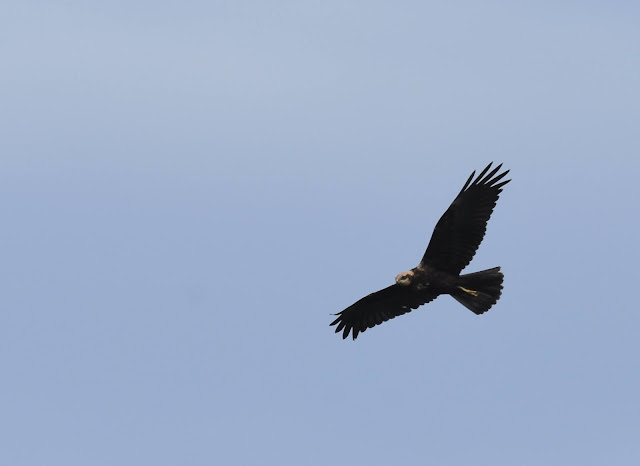 A superb twenty minutes or so of aerobatic skills in the stiff breeze. We've still never seen them catch anything other than gull chicks and dead goose/swan carrion but as this one appears to have a full crop we assume it must have eaten something fairly sizeable not so long ago.

Back at the visitor centre there is a ool of captive ducks that we almost invariably ignore apart to think should we take a pic of the tame Eiders???  Well today we did. 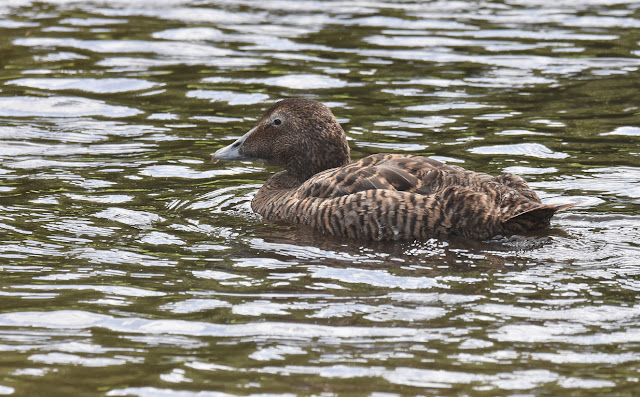 Not much else was seen on our travels around the rest of the reserve but we did have our first Common Darter of the season. It was a bit gloomy and the little dragon wouldn't face the front but we fired off a few shots anyway. 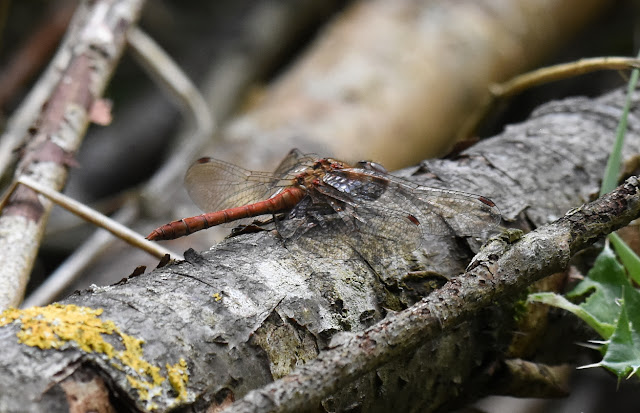 All too soon our time was up and we had to leave. A great day out in good company.

Where to next? More of the same coming up.shortly.

In the meantime let us know who's doing the swooping in your outback.

Enjoy your wildlife, there's plenty right outside your front door. But take care and maintain that safe social distance.