The Safari is but one of many who would like to see the end of the extremely environmentally damaging hobby (it's not sport!) that is driven grouse shooting. "But why?" do you ask "what harm is there in using living animals as target practice?" "If you've got a few bob more than the average Joe why shouldn't you pay a few thousand bucks to kill as many Red Grouse in a short a time as possible, it's not as if they're endangered or anything is it?" "And anyway they all get eaten in posh restaurants don't they?"
No they're not endangered, more the opposite; they're 'farmed' to produce excessively unnatural numbers far more than the carrying capacity of the environment so that Mr I've-got-a-bigger-wad-than-you has a chance of shooting 100 in a day rather than just 10.
But why should that bother you, they're still wild birds living out their lives in a wild environment aren't they? Unless of course you don't like the idea that living beings are being killed and maimed for target practice fun but then that make you a left wing commie pinko or worse an animal rights 'activist' or even worse a bunny- or even a tree-hugger - - when did doing or even thinking the compassionate thing become the 'wrong' thing and demand a derogatory term from the rest of society?
And then there's all the landscape scale destruction that goes with this perverse pastime - you can't call it a sport. Now if the grouse had AK-47s to shoot back that might be more sporting!

But 'They' will tell you that moorland is rarer than Tropical Rain Forest - which is true but so are golf course  and urban areas as a world-wide habitat. They don't tell you of the awful cost their precious moorland comes at though. The thousands of incinerated animals during the burns,

the total lack of trees due to burning and sheep grazing - which should and could be present. See the pic below of a lone self-seeded conifer (OK so it's a weed that shouldn't be there but is growing quite nicely thank you) almost at the summit of the highest point in SW Scotland.

And where's all the upland scrub of Bilbery, Juniper Gorse, covered in lichens and mosses - burned to a frazzle
They've neglected to tell you that Atlantic fringe temperate rainforest is a truly rare habitat, mainly because most of it has been destroyed and the tiny pockets that remain can't spread due to over-grazing by sheep and in some cases deer.
Then there's the knock on effects that affect us. Peat stained water running off the denuded areas cost a fortune to clean before it reaches our taps - who pay? Us in our watter bills, not those that caused it. Downstream flooding is made worse by their drainage and lack of sufficiently dense natural vegetation to hold the water back, although there are some projects to re-wet upland peat, who pays for that damage? Not them, us through higher taxes for flood defence and higher insurance premiums.
And then there's just the almost lack of any wildlife interest in the uplands. OK they'll say what about the waders and yes their extensive and excessive predator control probably does help breeding Lapwing, Dunlin, Golden Plover, Snipe, Redshank but their land management doesn't help other upland species like Redstart, Tree Pipit, Pied Flycatcher, Black Grouse, Whinchat,  and a whole host of small mammals and invertebrates. And of course anything with a hooky beak gets suspiciously 'disappeared' with their populations artificially low and almost impossible to expand their ranges in to areas they once frequented, Golden Eagle, Hen Harrier, and still Buzzard and Red Kite in some areas.
But it shouldn't be like this and hopefully the status quo won't last much longer. Another way is possible.
It's great that there are a few places where the sight below can still be found but this should be the norm not the exception.
Our brother lives in NE Italy. There between the major regional centre of Trieste and the capital of Slovenia, Ljubljana (they are only 60 miles (100km) apart lies a National Park which hosts these magnificent animals. Not only the Brown Bears but also Wolves and Lynx! 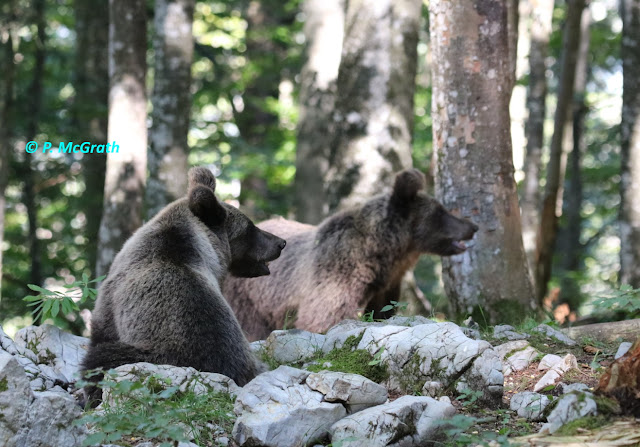 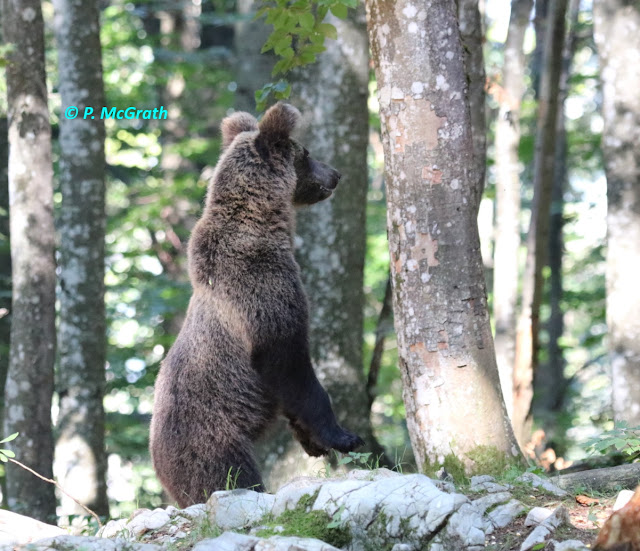 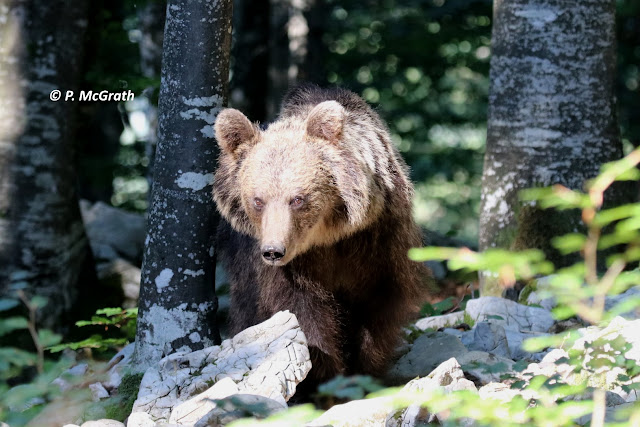 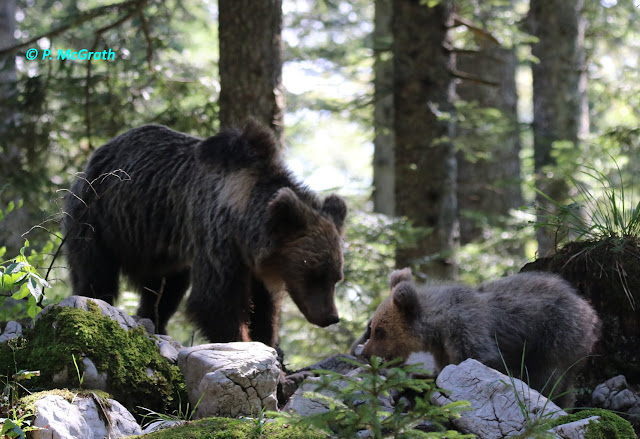 He took these from the hide run by Slovenian Bears. Can't wait to go!!!
Our uplands do have space for amazing sights like this...if only there was the political will from government and the 'vested' land owning interests.
We've got as a 10 point plan for better , more natural, wilder uplands for all to enjoy.
1. Black all drainage above the in-bye
2. No burning of heather - cut after mid-October and before end of the year. If too wet or too steep to cut - tough! Use the cuttings to block the drains mentioned above.
3. All tracks not shown on the last edition of the 1 inch to a mile OS maps to be dismantled and re-vegetated.
4. No predator control i.e. no traps, snares, stink pits, vermin shooting (what is vermin other than an out-dated Victorian term anyway)
5. Any trace of banned poisons get a mandatory prison sentence for senior land manager and land owner (assuming the land 'owner' isn't an off-shore 'trust')
6. No medication of wild animals either medicated grit and catch-and-dose
7. No farming subsidy for any land seen as patchwork heather on aerial photos - Agriculture is not the primary land use
8. No produce to be eaten off-estate, i.e. in the general food-chain, unless shot with non-toxic ammunition
9. No mass releases of non-native species. Shoots should begin the process of eliminating Pheasant, Red Legged Partridge, Canada Geese, Muntjac and Sika Deer from the landscape where possible.
10. 50% grants should be available for fencing upland gullies, cloughs, valleys, to at least 100m from their edge to allow natural regeneration. No planting required and any non-native conifers self-seeding should be removed.
11. OK we said it was a 10 point plan but we've added an extra one. All clear-fell forestry plantations to be allowed to regenerate naturally but again self-sown conifers except Scots Pine to be removed. Additional timber forestry can be started on adjacent suitable land with the proviso that once it's harvested it is allowed to revert to native woodland.
Lets try that for starters and see how we get on in 10 years - see if we need any tweeks.
Where to next? Sunshine on the cliffs maybe?
In the meantime let us know if you've got a bear behind in your outback.
Stay safe ,enjoy your local wildlife but keep that social distance.
That lot should do for starters - if the sheep and grouse business models can't manage that then it's time they were cosigned to history, certainly the latter.