The Safari seized the chance to do a bit of a sea watch last week as another Atlantic storm blew through. It was getting a bit rough out there as the tide rose but it didn't deter a couple of fishermen. 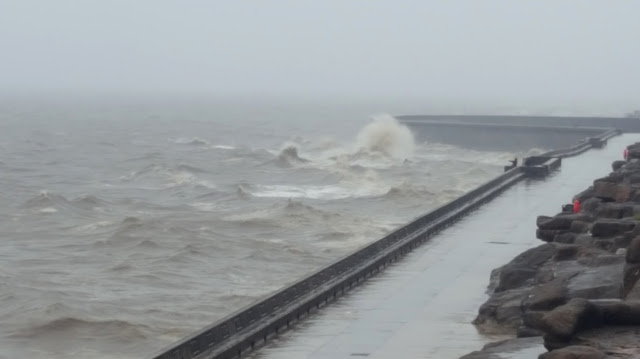 The torrential rain made focusing the scope tricky but there wasn't a lot to see any way. The local gulls caught a few small fish by plunging into the rough stuff just beyond thee distance the fishermen could cast, an unidentified duck flew through at the edge of the murk and a handful of Sandwich Terns past closer than usual southwards.  Easily 'bird of the session' was a dark bulky juvenile Pomerine Skua that came out of the grey to the north and briefly sat on the sea at the edge of the grey. We were about to try to ge ta phone-scope pic of it when it lifted and headed out in to the gloom again. After about another 20 minutes and increasingly heavy rain we called it a day.
We were out on the beach with the mutt the following morning and really didn't expect to bump into an exhausted/injured Purple Sandpiper, about the only thing of note we did see apart from a small number of Wheatears buzzing around on the cliffs.
On the return leg of our walk we could find no trace of the Purple Sandpiper, there were quite a few Herring Gulls kicking around on the sea wall in the general area and we hoped it had recovered and flown off and not disappeared down one of the gullet of one of the gulls.

The pools left by the receding tide are full of small Sand Gobies at the moment. Seeing them is easy enough as you can spot their shadow on the sand as they dart away at your approach but getting a pic is another matter. It requires stealth and patience as usually just as we've found one in good light and keeping still the mutt charges through the pool and disturbs both the fish and all the fine sand making the water muddy and impossible to see through for a good few minutes. 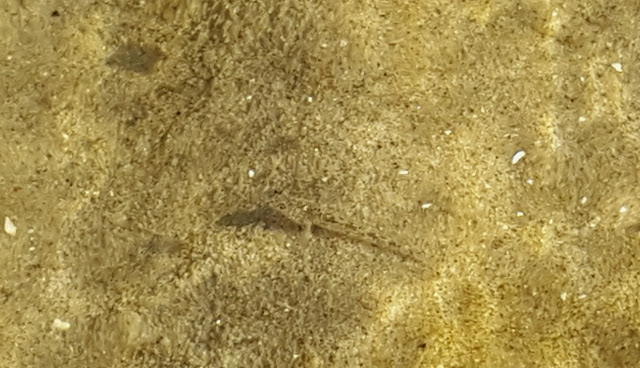 We took the big camera with us for the afternoon dog walk as it was nice and bright and sunny. We hoped that a couple of the morning Wheatears would still be about. They were and as a bonus we bumped in to good friend PL who had had the same idea.

Turned out to be a good move as there were still several Wheatears at various points along the cliffs, they were very active taking advantage of the fine weather bringing out lots of flies. A supporting cast of a few Small Tortoiseshells, a Carrion Crow breaking open a Mussel it had found washed up on the beach and a young Herring Gull standing sentinel over the proceedings along with a handful of Pied Wagtails, one of which looks like it has lost a foot. We filled our boots! 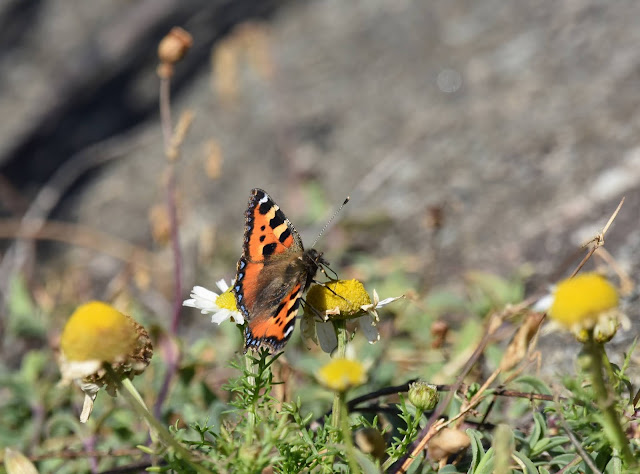 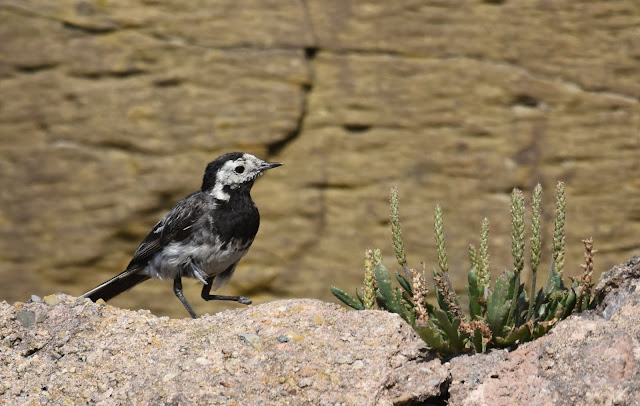 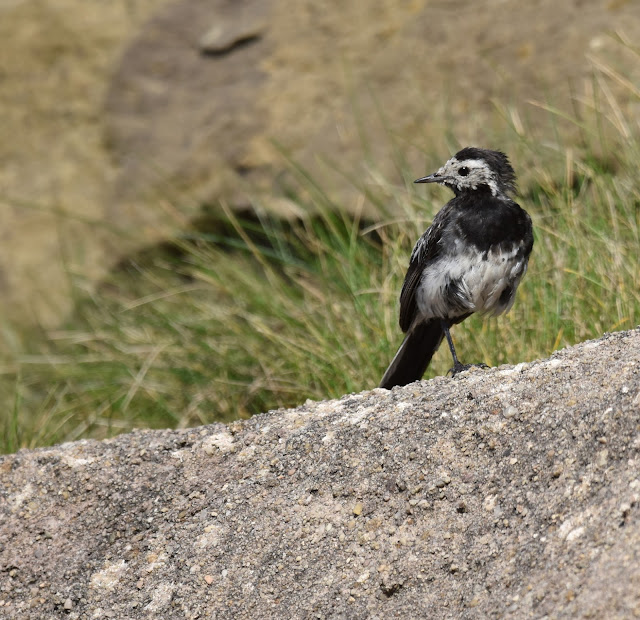 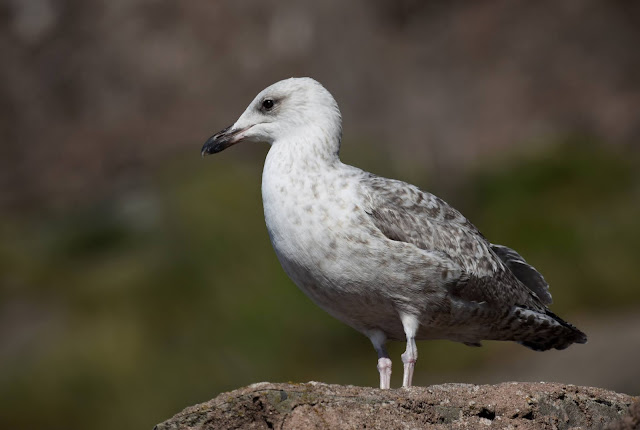 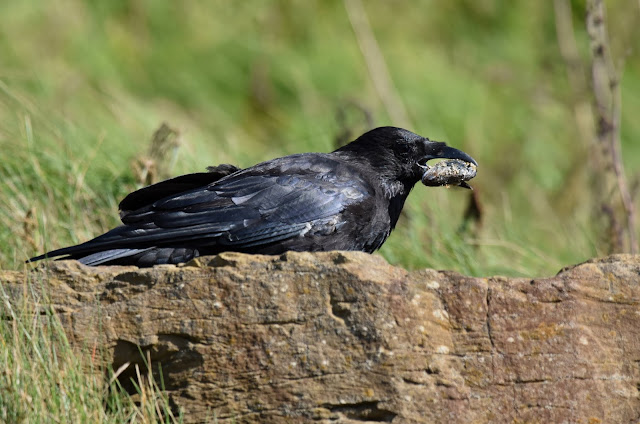 The Wheatears didn't disappoint either, after a bit of to-ing and fro-ing they eventually gave themselves up settling in convenient places and poses. 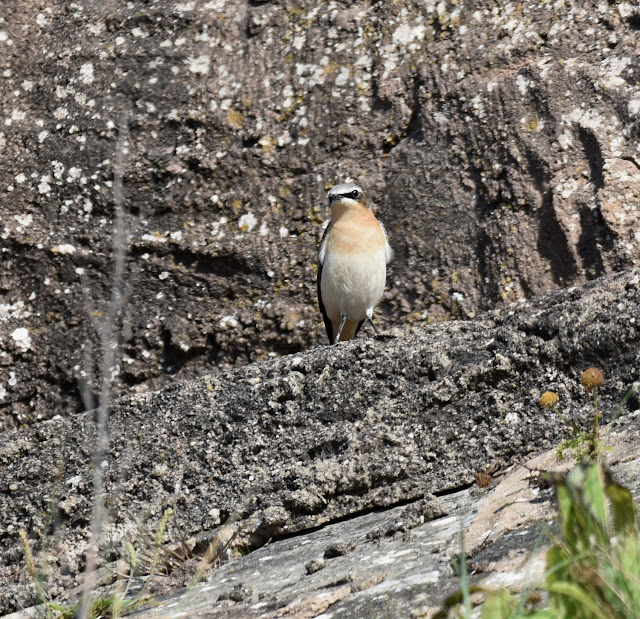 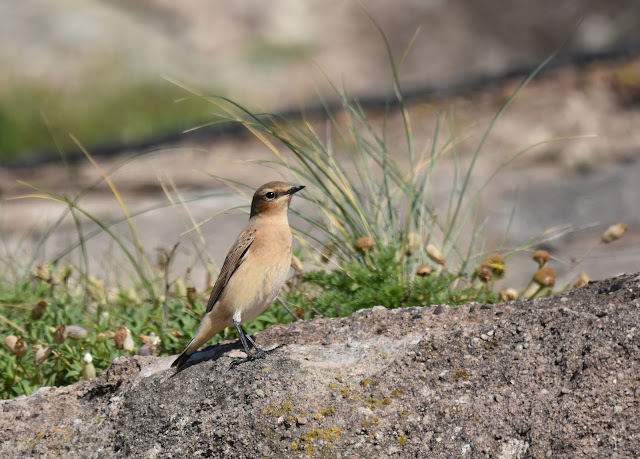 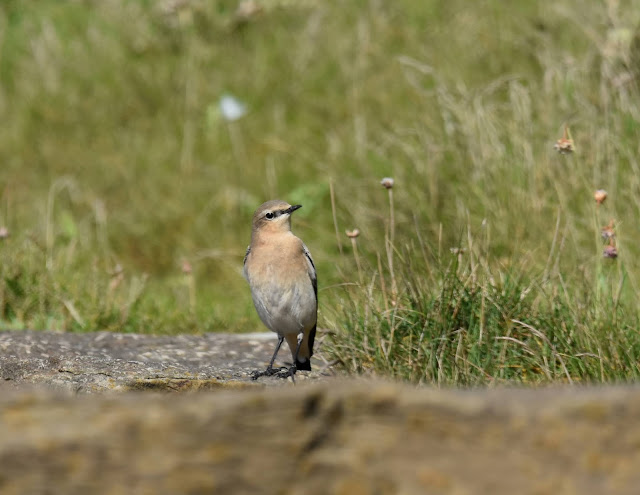 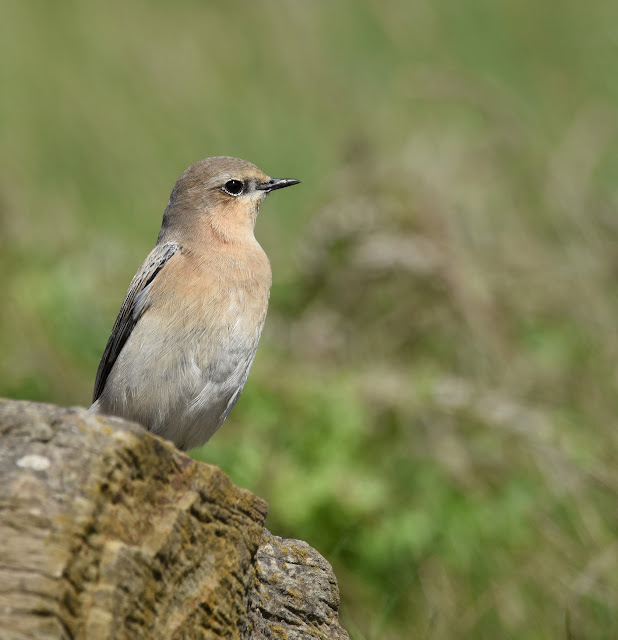 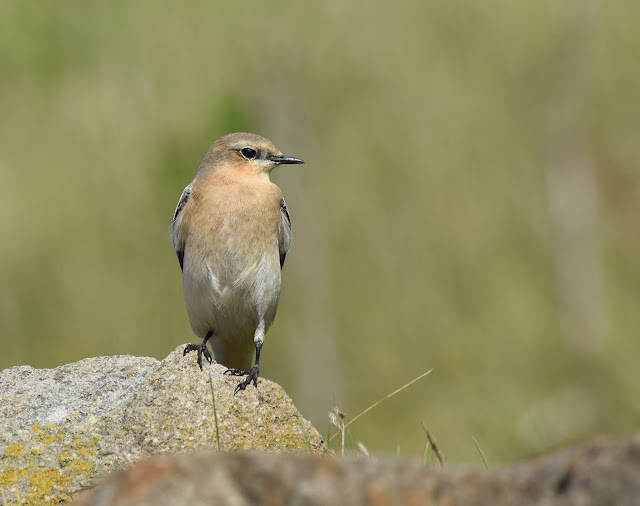 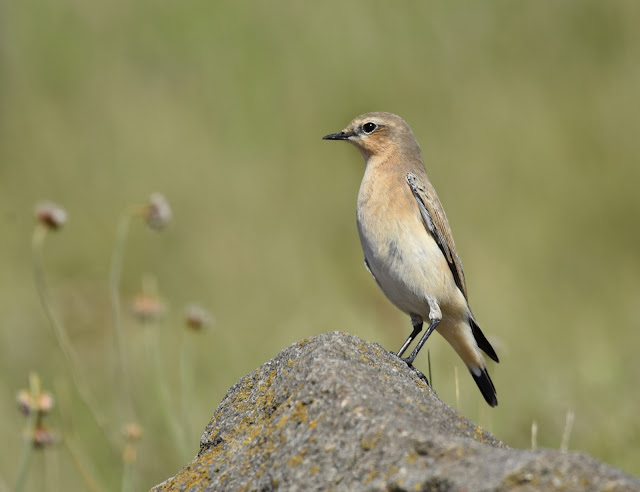 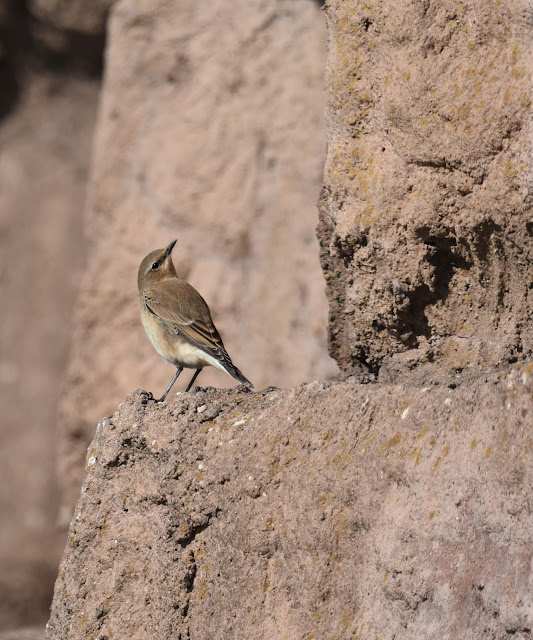 While enjoying the Wheatears we happened to notice that one of the Pied Wagtails was very pale and wasn't a Pied Wagtail at all but a White Wagtail fresh in from the continent. A nice little bonus fro the days birding. 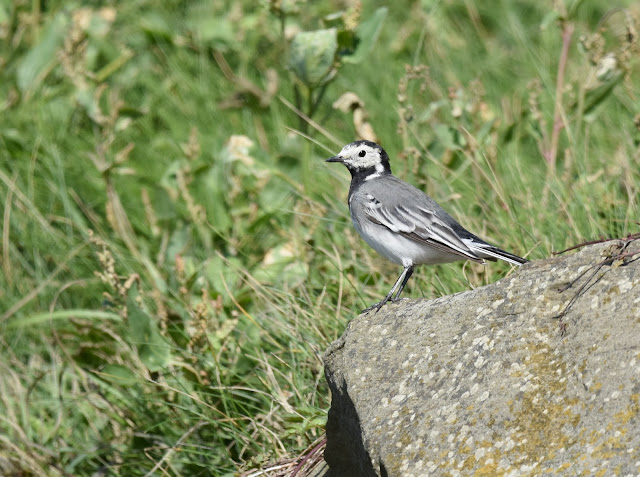 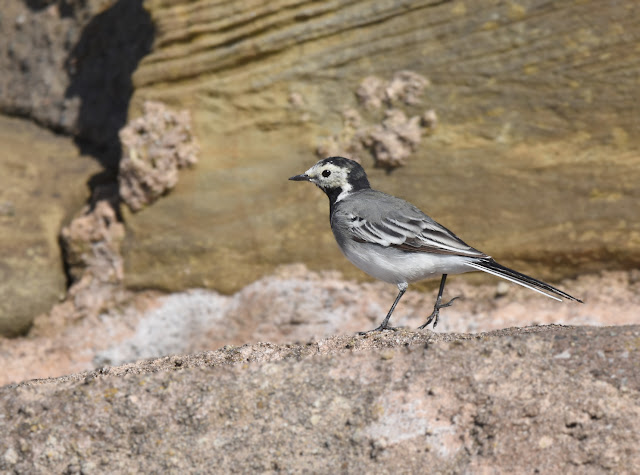 We've also had the moth trap out several times recently. Plagued by Large Yellow Underwings we've been - plagues we tell you - - plagued! But we've had none of the other yellow underwing species. Like Small Tortoiseshells they seem to be noticeable by their absence this summer.  Fortunately just in the last few days or so Small Tortoiseshells have become numerous at last, and we've started to get Lesser Yellow Underwings too, nowhere near as common as their larger cousins but still the second most numerous species in the trap. 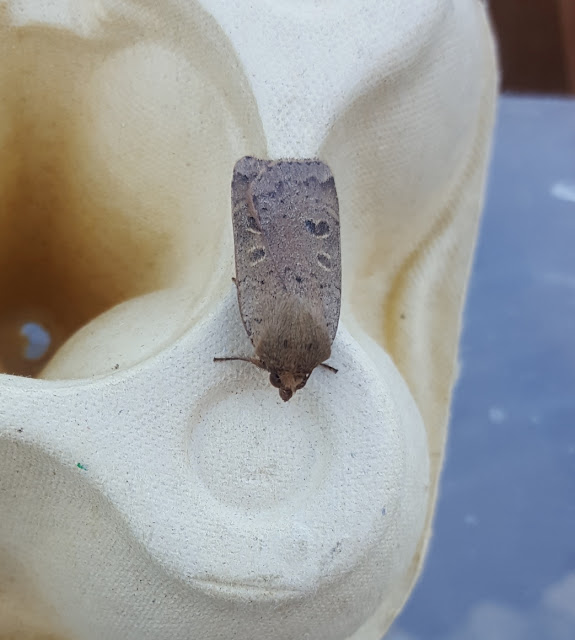 We had a little run of Willow Beauties. 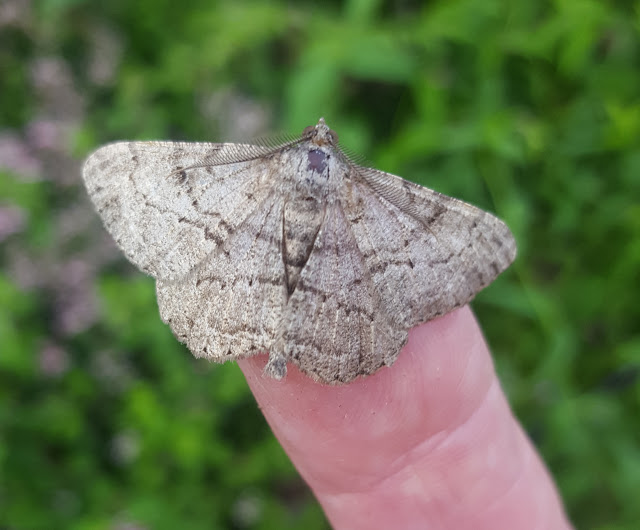 Setaceous Hebrew Characters have started to come to the trap. 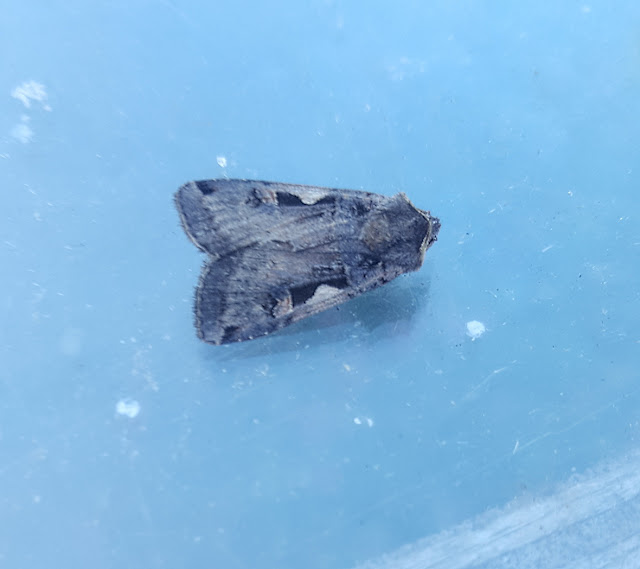 As have these pesky things - they're often lurking unseen underneath the egg boxes so it's always wise to watch where you're putting your fingers in the trap at this time of year. They're too cold to fly away first thing in the morning so are much more inclined to use their sting, as we've found to our our cost in previous years! 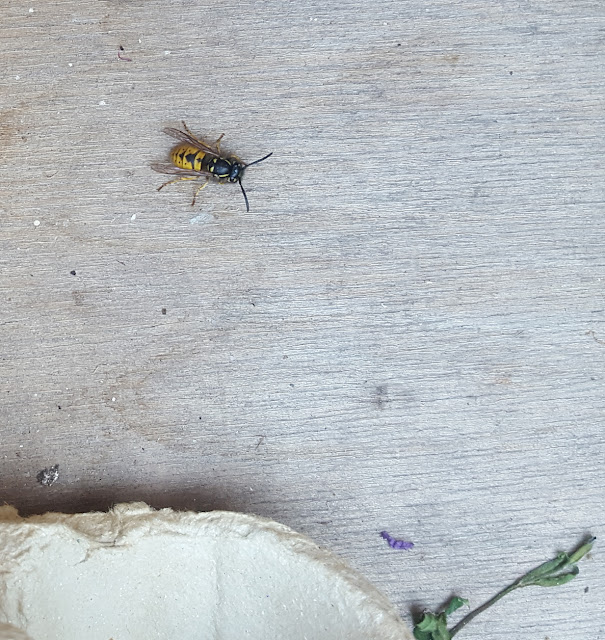 Another sunny afternoon visit to the beach saw us attach the 1.4x converter to the big lens - it's a while since that's been out of the box! We were hoping for some more Wheatears but there weren't any on the cliffs so we had make do with what was on the beach.

Even wit hthe advantage of the converter on the lens giving us extra reach we still managed to take one step too many and flushed it - damn; we hate doing that! 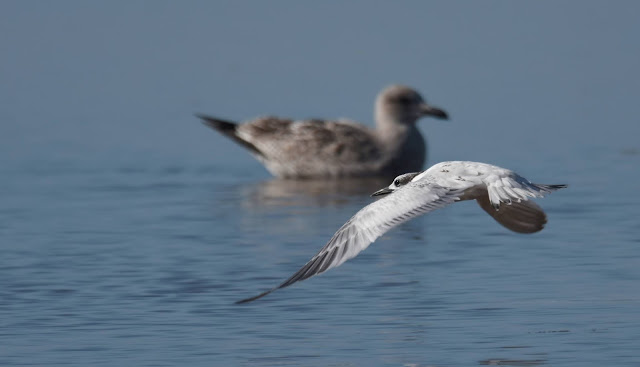 Where to next? We've been back to the wetlands and had a great time and  done some more moth trapping to tell you about

In the meantime let us know who's got all the 'W's in your outback.

Remember - enjoy your local wildlife but stay safe keep that social distance up.