Here on Another Bird Blog we have featured the long running saga of the Turtle Dove and France on a number of occasions.  Recently we also highlighted the issue of birdlime (or "glue") hunting in France.
Now it seems that France has at last decided that the indiscriminate killing of 17,500 Turtle Doves is not good for the reputation of the French nation. 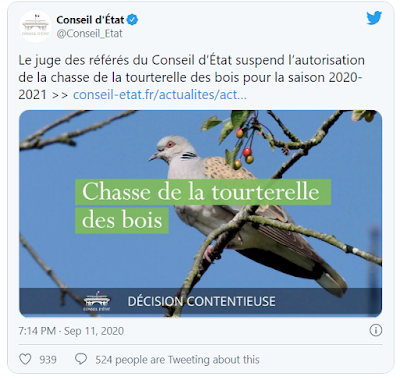 https://twitter.com/Conseil_Etat/status/1304483459096817666
The European Turtle Dove will no longer legally be killed in France this autumn, after the Conseil d'Etat  (in effect the Supreme Court of France) banned hunting of the Vulnerable-listed species. 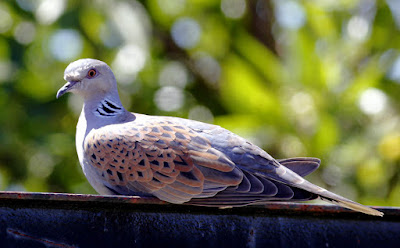 Turtle Dove
On Friday 11 September 2020, the highest administrative court in France outlawed the practice for the 2020-21 season. The Conseil d'Etat judgement said: "The Council notes that as the species has dropped by 80% in 15 years, experts recommend a hunting ban for this wild bird – and the government has not brought any arguments allowing it to justify its authorisation of hunting."
This comes weeks after the French government had approved the legal hunting of 17,460 European Turtle Doves this autumn, following a decree passed by Barbara Pompili at the end of August, despite public consultation in the summer finding that some 77% of 20,000 contributors were against the idea.
The Ligue de Protection des Oiseaux (LPO) lobbied hard against the decree and says that a minimum of 7,000 Turtle Doves – and as many as 10,000 – have already been killed this season. The decision also comes as the European Commission has requested that the French state "put in place all measures" to help the European Turtle Dove population return to a "good state of conservation", the LPO said.”
Readers will note that the ban is for this autumn only whereby Turtle Dove migration is probably over when many thousands have already been slaughtered for pleasure. Also, unless the ban can be extended by way of local or wider pressure in EU countries it seems likely that French guns will be blazing again in Autumn 2021 and beyond,
====================================
And from The Connexion . “French News and Views “- 16 September 2020.
A French MEP has called for “a gradual stoppage of hunting” in France and said that hunters in the country currently “hunt protected species in a totally illegal way”.
Member of the European Parliament and ecologist Yannick Jadot told news service FranceInfo: “This is not a leisure sport; the death of animals cannot be leisure. “In France, we hunt 64 species. That is two to three times’ more than the rest of Europe. We hunt protected species in a totally illegal way - for example the Eurasian Curlew. In Europe - the EU - pays farms in Poland to save the species, and in France, we shoot them.” 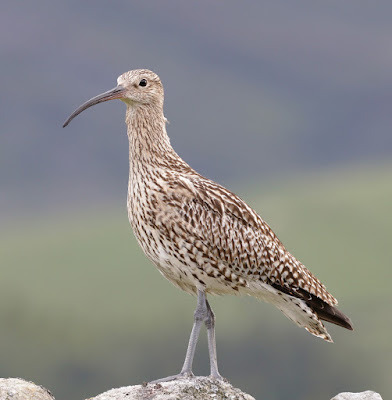 Curlew
Mr Jadot called for a “gradual stoppage of hunting” and said: “Allow us to begin by hunting down all the illegal hunts.” He criticised the government for undermining European conventions, and said there had been 13 instances in which the government supreme court Le Conseil d’Etat had made “scandalous exceptions”.
Mr Jadot also called out justice minister Éric Dupond-Moretti, who recently said he is against bird glue hunting, but before taking his role in the justice ministry, wrote the preface to a book by Willy Shraen, head of French hunting federation, la Fédération des Chasseurs. 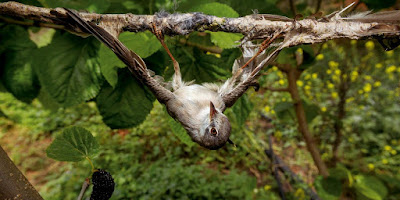 Glue Hunting
Mr Jadot said: “The least we can expect from the minister for justice is to not write anti-ecological prefaces on a hateful pamphlet by the head of hunting. It is to respect European law.”
Animal welfare and hunting are highly-contested issues in France. Animal rights groups last month called for there to be a dedicated minister for animal welfare, while more than half a million people have signed a high-profile petition calling for a vote to outlaw several practices considered to be cruel to animals.
Thank goodness there are people in France able and willing to speak up for nature. While the UK’s is not without irregularities and law breaking it is fair to say that we are light years ahead of many if not all European states.
When Britain finally leaves the European Union on 31 December 2020 we as an independent nation state with our own laws and judiciary can justly say that British people will no longer put our names to or play any part in the barbaric practices taking place in too many parts of the EU.
Back soon friends. I will be in Europe but not France.