I headed to the cemetery for first light, although first light isn't that early at this time year with sunrise just after 7:00 a.m., to look for grounded migrants. At first light, there was one okta cloud cover with a 10-15 mph NW wind.
Grounded migrants were thin on the ground with just a single Redwing, three Robins, two Goldcrests and two Coal Tits falling into that category.
There was some vis, and interestingly everything was heading north from here into the wind. It's almost as if direction of travel isn't that important for some of the partial migrants that I recorded, but more important was gaining the extra lift by flying into wind (increased air flow over wings = extra lift with little energy expenditure). So, heading north, which after a few wing beats would take the birds out over Morecambe Bay, I had two Grey Wagtails, 23 Linnets, four Goldfinches, 34 Chaffinches, three Greenfinches, two Siskins, a Reed Bunting, a Meadow Pipit (why so few Mipits in early October?), a Carrion Crow and twenty Jackdaws.
I was going to go to the coastal park next, but a text from Ian telling me not to bother, as there were workmen in the park with radios blasting out, meant that I did a u-turn and headed to the coastal farm fields.
The vis had really quietened off, and you could argue that it really never got going, but what I did have was a mixture of birds both heading north in to the wind, and also travelling in the classic autumnal direction of south. Of interest were nine Skylarks (3N & 6S) and 44 Pink-footed Geese south. 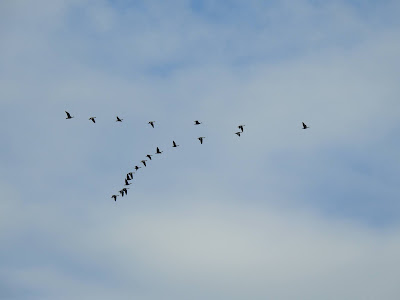 Pink-footed Geese
I did have a quick look on the sea, but I was plagued with heat haze and after just three Auk sp. and four Common Scoters I gave up. Grounded migrants were limited to a Wheatear, a Coal Tit, six Robins, three 'agitated' Dunnocks and another Redwing.
The farm fields are listed as a Biological Heritage Site (think Site of Importance for Nature in counties outside Lancashire) for their botanical interest, particularly surrounding some of the ditches, but also for the population of Roesel's Buch-cricket that occurs here. Until the early 20th century Roesel's Bush-cricket had a southeast distribution, but they have expanded slowly north and west. It favours damp meadows and grassland, and this is what is found here. They were in fine song this morning, and their long, monotonous, mechanical song accompanied me in places on my walk round.
It warmed up as the morning progressed and I had a lovely Migrant Hawker sunning itself on the south facing side of a scrubby Hawthorn hedge. See picture below. 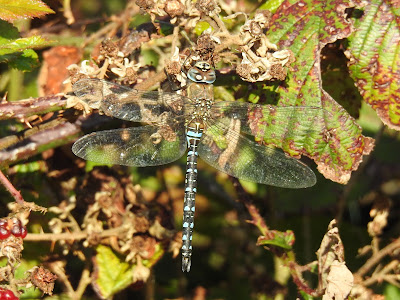 Migrant Hawker
I also photographed another invertebrate this morning, which was a Common/Garden Snail making its way along the mollusc motorway, aka the sea wall to you and me. 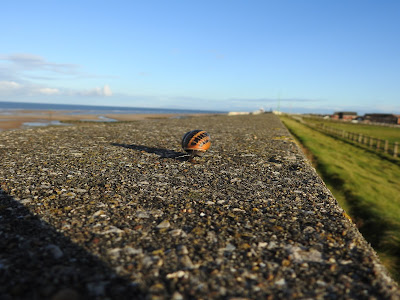 Common Snail motoring along the mollusc motorway (above & below) 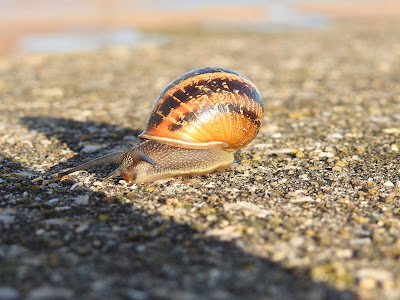 It's not a brilliant forecast for the morning, but it is October after all, so I'll try and make the effort and get out for a couple of hours.