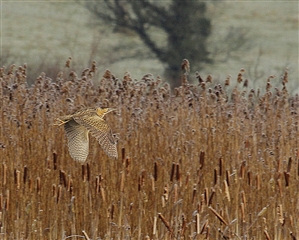 It’s been another busy week or two here at Leighton Moss and as we’d expect at this time of year the main attraction is of course those perennial favourites, bearded tits.

Many visitors are getting great views of these enigmatic birds as they emerge from the dense reedbeds to gather grit and pick up fallen seeds from the paths. They seem to be a bit slow in taking to the grit trays this year; perhaps the mild weather is still making insect food easy to come by and so they are in less of a rush to fill up on grit?

As always, rather than standing staring at the grit trays I recommend walking slowly along the Causeway listening to that distinctive 'pinging' sound the birds make – just a reminder, please don’t play recordings of bearded tits to attract them in. If you’re patient you should get good views. And looking at some of the photos our visitors have ben getting, good views are indeed available!

Bitterns have also been showing well lately, mainly in flight. In fact as I was opening Lilian’s hide this morning I got great views of a pair chasing each other over the reedbed. And earlier today a family had superb views of one as it flapped its way across the Causeway Pool. Are these newly arrived birds from further afield coming for the winter or residents simply moving around in search of suitable fishing spots? Photo of bittern by Dave Dimmock.

Marsh harriers are very in evidence too with at least seven different birds around the site in recent days. Meanwhile, such favourites as great white egret and kingfisher continue to please visitors at various spots around the reserve. 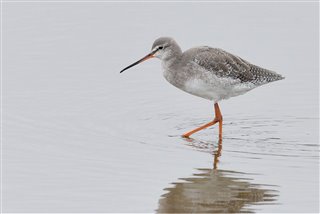 Other bits of interest include the return of last year’s rather distinctive cinnamon teal / shoveler hybrid whicj pitched up on Lilian's Pool earlier this week. A brief appearance was made by a drake ring-necked duck before it relocated to nearby Pine Lake. This North American vagrant is almost certainly the same bird that was present there last winter - will it stick around again for the next few months?  Yesterday, as I walked back from the Allen Hide I noticed a stonechat in the hawthorns alongside the track - things are still very much on the move. Spotted redshank and greenshanks are also hanging around and may be set to winter with us. Photo of spotted redshank by Mike Malpass.