Here I am showing my age in quoting Bob Dylan from 1963. I’m off the road for a few days but Thursday and Friday are look hopeful for my first ringing since arriving back from Greece.
Meanwhile, here’s a topic tackled previously on Another Bird Blog right back to 2013. Some might accuse me of “banging on about it” - the subject of so called “game shooting”. Below are just five links to previous posts dedicated to the subject in attempts to draw attention to what is a national scandal – the killing for fun of many millions of birds.
https://anotherbirdblog.blogspot.com/2020/01/an-unfunny-game.html
https://anotherbirdblog.blogspot.com/2014/06/buzzards-here-we-go-again.html
https://anotherbirdblog.blogspot.com/2013/11/these-sporting-times.html
https://anotherbirdblog.blogspot.com/2014/06/buzzard-update-birding-update.html
https://anotherbirdblog.blogspot.com/2017/03/theres-still-no-ringing-allowed-near.html
But now this weekend comes what is described as an “existential challenge” to the industry as none other than the RSPB takes sides in the ongoing debate. This from an article in The Sunday Times of 10 October 2020.
=======================
“Pheasant shooting is facing an existential challenge as the RSPB prepares to end its neutrality on the sport by demanding reforms to protect native wildlife. More than 50 million non-native game birds are released each year by shoots, and conservationists say this has a devastating impact on other species.
Only about a third of 47 million Pheasants and 10 million Red-legged Partridges released are shot and retrieved as the remainder become food for scavengers such as foxes, crows and rats, boosting their numbers. They in turn prey on threatened species such as Curlews and Lapwings.
Reptile experts have also blamed the rise in pheasants for the decline in adders as the birds kill adult snakes and swallow young ones whole. Another concern is that some shoots secretly dump dead pheasants because the number killed far exceeds the demand for game meat. The Times revealed footage of dozens of dozens of dead Pheasants being dumped into a pit by a digger on a farm in Leicestershire last year, 2019. 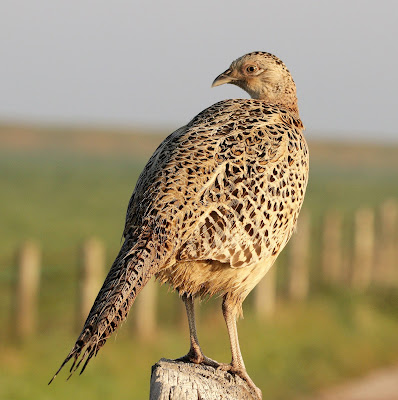 Pheasant
There are more than 5000 shoots and customers often pay thousands of pounds to kill hundreds of birds each day. The RSPB Royal Charter, granted by Edward VII in 1904 describes game bird shooting as “legitimate sport” and the charity has previously resisted calls from members for it to campaign against the mass release of birds.
The charter says “The society shall take no part in the question of the killing of game birds and the legitimate sport of that character except when such practices have an impact on the objects”. The objects include “conserving wild birds and other wildlife”. Mounting evidence of the harmful impact of the mass release of game birds, which has risen tenfold since the 1970s , prompted the RSPB last year to order a review of its policy. The results of that review are due to be presented at the charity’s annual meeting today.
This summer the charity quietly adopted a set of “conservation principles” on game shooting which pro-shooting groups feared would place severe restrictions on the sport. Under the principles, game bird shooting “must not adversely affect the population of any native species”. Shoot practices should be “assessed for their environmental impacts and regulated, enforced and in some cases stopped”. Eight out of ten RSPB members strongly supported those principles in a survey conducted by the charity in February and March.
Shooting groups fear that the RSPB which has 1.2 million members will use its influence to persuade the government to require shoots to obtain licences which could be withdrawn if problems were found. The charity has been calling since 2014 for driven grouse shooting to require a licence because of evidence that gamekeepers kill protected birds of prey.
Tim Bonner chief executive of pro-shooting Countryside Alliance said he disagreed with some of the principles, which “had no basis in international treaties or other conservation thinking that we can find”. He added “The RSPB has increasingly been influenced by a small clique of people who are obsessive about their dislike of shooting”.
Chris Packham, the wildlife broadcaster is a vice –president of the RSPB and also co-founder of the group Wild Justice, which is bringing a legal challenge against the government, accusing it of being in breach of the EU habitats directive by allowing the mass release of game birds without assessing the impact on wildlife sites.
A survey of shoot owners, managers and clients commissioned by the RSPB found that many saw the charity’s principles as “the start of a slippery slope towards restricting or banning shooting”. A report on the survey results said there was a lack of trust in the RSPB’s “underlying motivations” with some feeling “let down by the RSPB… for example a lack of acknowledgement of the benefits it can bring”.
The British Association for Shooting and Conservation and Natural England co-funded a review of the environmental impact of game bird releases and found that releasing large numbers could have negative impacts on habitats and wildlife. However, it concluded - “The evidence suggests that at least some of these effects can be ameliorated by following best practice relating to sizes and densities.”
https://www.thetimes.co.uk/article/game-shooters-fear-for-their-sport-as-rspb-chiefs-take-aim-vc9jpqkxg
=======================
The decision of the RSPB to now maybe take sides in this long going debate could well be a game changer. 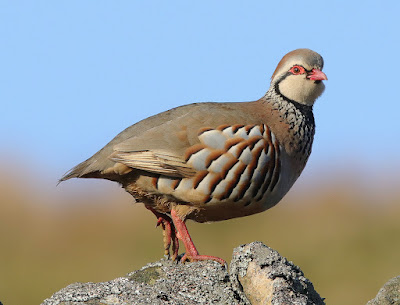 Red-legged Partridge
Watch this space for more news of the ongoing saga plus birding, ringing and photographs on Another Bird Blog.