I wasn't sure what time the rain was going to come in this morning, the forecast wasn't clear. Depending on which forecast you looked at, it could be around dawn, or an hour or two after. Was there a chance that it would drop a few birds in, or was that south-westerly wind going to be a problem?
I drove into the cemetery under full cloud cover, with a moderate south-westerly wind. Some of the trees and shrubs were moving back and forth, and it looked far from conducive for seeing a few migrants.
First up was the ubiquitous ticking Robins, autumn wouldn't be autumn without the soundtrack of ticking Robins, and five were 'ticking' away on my walk round this morning. A few Goldcrests called, four to be exact, and the same number of Coal Tits were never far away from the 'crests.
I'd walked the western side of the cemetery, and I was walking along the northern perimeter, before cutting across the middle and heading for the trees and shrubs that form the southern boundary, when I heard the distinctive call of a Brambling as it headed east.
There was nothing along the southern boundary, and as I continued on my circuit heading back along the western boundary, I could hear Whooper Swans calling, and looked up to see a pair winging their way south. 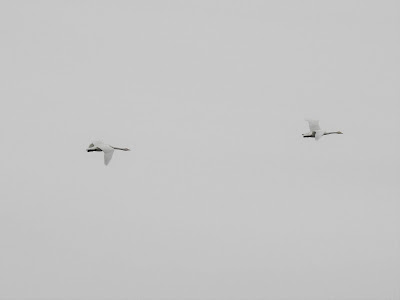 Whooper Swans
So far, there had been no rain, and at this point I bumped into Ian, and it started to rain. Straight away six Redwings and a Song Thrush dropped out of the sky, and a party of eight Long-tailed Tits carrying a Chiffchaff (not literally), moved through the trees. So, a little bit of migration action in miniature!
It was more of the same in the coastal park with more ticking Robins, Goldcrests, Coal Tits and a migrant Song Thrush. I headed to the coastal farm fields, and the rain had set in now, so I saw very little else. I did have a pair of Stonechats, and as always with Stonechats at this time of year, it raises the questions of whether they were migrants, local breeders or a soon to be over-wintering pair. The only way to answer that, is to see if they are still there over the next few days and weeks.
I bumped into a party of ten Long-tailed Tits, but they weren't carrying anything other than a couple of Blue Tits. Four Blackbirds and a Song Thrush feeding on Hawthorn berries along the big hedge by the ditch had a 'migrant' feel about them, or was that down to the morning, and a small flock of 22 Goldfinches also made it into my notebook.
I returned to my car via the shore and a group of twelve Turnstones were roosting on some exposed rocks not covered by the tide.
At the moment it looks like it's remaining northerly until Friday, then switching to easterly, and the wind is dropping, so hopefully that will bring a few birds in.