The winds were forecast to be a tad too strong for any ringing this morning, so I headed to the coastal farm fields at first light. I walked along the sea wall under two oktas cloud cover with a 10-15 mph east-notheasterly wind.
The tide was still running in, but most of the shore was covered apart from some large rocks that 18 Turnstones were roosting on. An hour later, and even these rocks were covered, and all that was left was a solitary Turnstone on the sea wall. 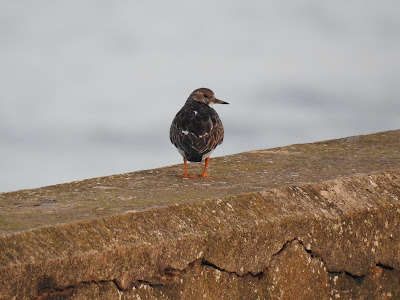 Turnstone
I stopped at my seawatching/vis mig position towards the end of the sea wall, and had a look on the sea. It still wasn't jumping, but there was a little more activity over recent days, in the form of a pair of Wigeon on the sea, 80 Common Scoters, twelve Oystercatchers south, a Little Egret south, 19 Golden Plovers north, two Auk sp., five Pintails, three Red-breasted Mergansers, a Shelduck, two Red-throated Divers, a Grey Plover north and four Dunlins north.
There wasn't really any vis until the Norse invaders arrived mid-morning in the form of some Redwings. We never get anywhere near the numbers of Thrushes that move down the western edge of the Pennine spine. I think the birds that we get, are re-orientating after arriving on the coast, and heading back east again to continue on their planned route. Bryan, at his Hutton Roof/Burton-in-Kendal (south Cumbria) watchpoint recorded 7,086 Fieldfares NW and 5,721 Redwings NW this morning, far more than we ever get.
However, I had 111 Redwings north over the farm fields, and a further 42 east-northeast when I was at the cemetery a little later. Starlings were on the move as well, and I had 58 head north. Other bits and pieces on vis were two Rock Pipits, five Alba Wags, eleven Pink-footed Geese, two Chaffinches, five Skylarks and a Brambling all heading between northeast and east, except for the Pinkies who headed south.
I didn't have any grounded migrants at all, it wasn't that kind of morning. The pair of Stonechats were still knocking about, so that answers the question as to whether they were migrants or not, and the answer is no.
The forecast is looking okay for some ringing tomorrow, so I'll let you know how I get on.