Thursday morning was starlit, dry and clear. To catch migrant birds our mist nets needed to be up and ready at dawn. I met Andy at 0630 at Oakenclough to an easterly wind of 15-18 mph when the forecast had indicated speeds of 5 to 8 mph. Far from ideal, but we cracked on working and hoped that the forecast was accurate if mistimed and that the wind would subside.
While I’d been in Greece Andy had caught the first Redwings of the year, including a likely Icelandic one. This is the time of year when we hope to catch thrushes. Not just any old thrushes but the five major migratory species of the family Turdus that arrive in the UK from now and for the next several weeks. Our main target is Redwings Turdus iliacus and Fieldfares Turdus pilarus. Normally we catch very few Blackbirds Turdus merula, Song Thrushes Turdus philomelus or Mistle Thrushes Turdus viscivorous at this site.
In autumn, Redwings gather along the Scandinavian coast at dusk before launching off on their single 800 km (500 mile) flight across the North Sea to the UK. In rough weather, many may crash into the waves and drown.
Some Redwings come from Iceland to winter in Scotland and Ireland. Others come from Russia and Scandinavia to winter in southern England and further south in Europe. Fieldfares arrive from Scandinavia and Russia but quickly pass through our area where for a week or two they can be seen to form large flocks, often in the company of Redwings. Both species gorge on hawthorn berries until the trees are stripped bare.
Prior to today and in six seasons here at this Oakenclough site, we'd caught 310 Redwings and just 18 Fieldfares, an indication of which species is the easier to catch. 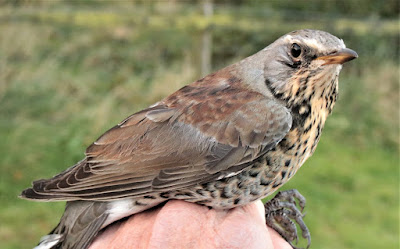 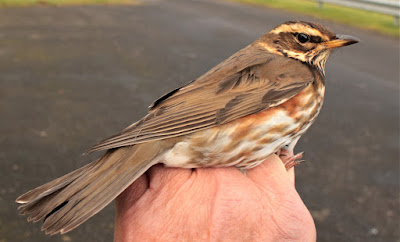 Redwing
Today followed a similar pattern with a total of 27 birds caught made up of 19 Redwing, 2 Fieldfare, 2 Chaffinch, 3 Blue Tit and 1 Treecreeper. 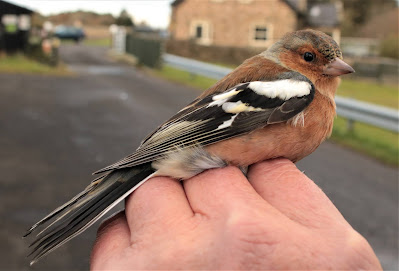 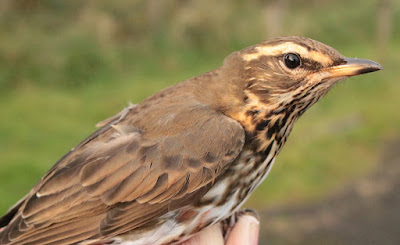 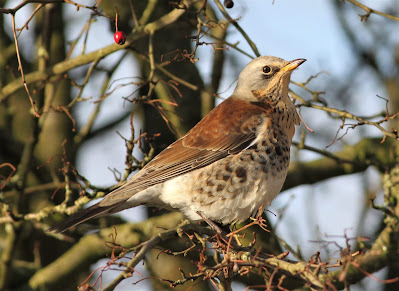 Fieldfare
Small numbers of Redwings began to arrive in the half-light of dawn. At first and due to the cold stiff breeze we thought that these had come from a nearby roost. At the sky lightened the small groups turned into larger associations of mixed Redwings and Fieldfares, and then into larger flocks. Mostly these flocks arrived from the south east and then flew north and west towards the visible Morecambe Bay and Fylde coasts. We saw flocks of Redwings and we saw flocks of Fieldfares, but mostly the flocks were mixed and varied in the number and proportion of each species.
By 1115 when we packed in to rain showers we estimated 1650 Redwings and 650 Fieldfares had passed through and overhead in four hours.
It was about 1100 when the wind finally died a little by which time we felt sure that had the strength been less from the off, and because of the large number of thrushes on the move, we would have had a bigger catch.  Due to the direction of arrival and departure we thought that these 2000+ birds were arriving via the east coast then travelling through and over the Pennine Hills to the west coast. From there they would eventually continue their southward migration.
The weather looks settled for a day or two. Maybe we will get another chance in a day or two?
Log in to Another Bird Blog soon to find out.