I had another venture to Bowland again this week, a very enjoyable venture, they always are.

If I'm doing revisits of the five moorland locations of Caton Moor/Harrisend/Catlow/Hawthornthwaite/and Birk Bank, the 75 Bowland Stonechat record now has to stand, but I need to visit again to establish the number of wintering birds.

On Thursday Harrisend produced 5 Stonechat, ten short of the count on 1 September. Also a decent count of 8 Reed Bunting, a Blackbird and Robin were the only other birds noted. Later on Hawthornthwaite Fell, I found no Stonechat despite a count of nine on 5 October, but noted 9 Red Grouse.

At Birk Bank on Friday, 4 Stonechat compared to 14 seen on 21 September. Also noted, 5 Red Grouse, and a Raven and Buzzard overhead. Off Rigg Lane, a mix of c.40 Fieldfare and Redwing seen. 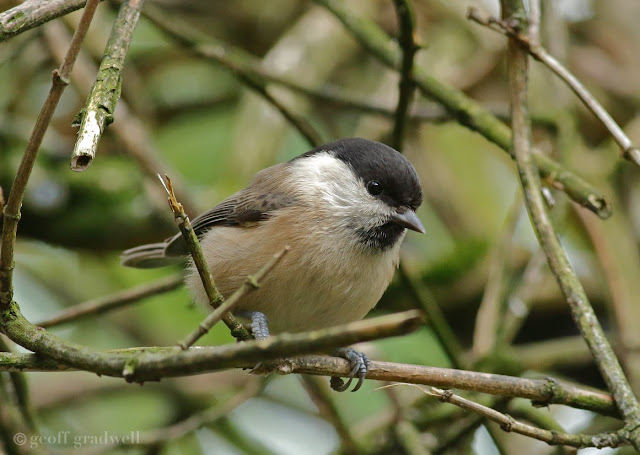 I reckon Martin Jump was well pleased to find a smart Willow Tit on the feeders on his allotment at Haslam Park in his home town of Preston last Monday 12 October....Beat that for a garden tick!
Martins record was soon followed four days later, when Malcolm Evans found another Willow Tit at Carr House Green Common on 16 October, as the crow flies about six miles away from Haslam Park.
Only the Turtle Dove is more imperiled than the Willow Tit as Britain's fastest declining passerine. The RSPB launched a national survey that is currently at the midway point. At this point the survey has revealed that the breeding population of the Willow Tit in Lancashire is similar to that of 10 years ago, bucking the national steep downward decline. Ref:Steve White/Lancashire Bird Report 2019
Thanks to the late Geoff Gradwell for his image of the Willow Tit.

Fungi. Pete Woodruff.
This fungi caught my eye in damp moss on Harrisend Fell on Thursday. It was unable to be specifically identified without seeing the gills, but assuming some colouration in the gills, the suggestion is that it is possibly either Mycena epipterygia or Galerina paludosa.
Thanks to Pat O'Reilly MBE at for the invaluable fungi help First Nature
There's no relationship between my header image and the current post, but it's just a nice one of the Black-tailed Godwits on the Lune Estuary at Glasson Dock in April 2016.