Yesterday morning Gail and I fancied a walk for a bit of fresh of air, and some communion with nature, so to kill two birds with one stone, we headed to our newly set up feeding station in the Hodder Valley in Bowland. The feeding station has only been operational for a week or so, so we wanted to see if the birds had found it yet, and at the same time we could have a walk in the wooded valley.
I suppose autumn is slipping away from us now, but there were still some autumn colours left in the landscape, which I hope the photographs below will attest to. 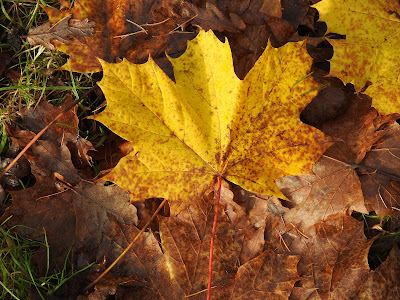 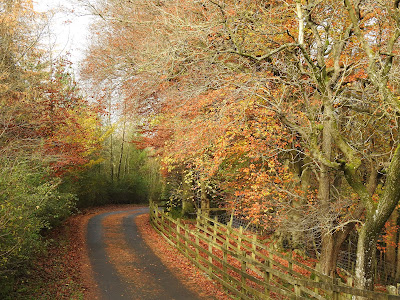 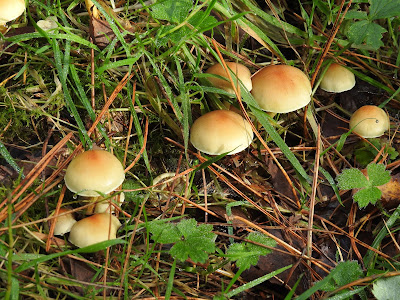 Sulphur Tuft (probably)
We started off at the feeding station itself, and there was quite a bit of activity from Nuthatches and Coal Tits on the feeders, and Chaffinches feeding on the seed that we spread on the ground. Walking down the wooded valley a Great Spotted Woodpecker, and a few Jays called, and a Raven 'honked' overhead. The calling continued with a single Song Thrush, and then we walked up the valley side and into the arboretum where it was the turn of Goldcrests, Goldfinches, Siskins and surprisingly three Bullfinches to announce their presence through voice. 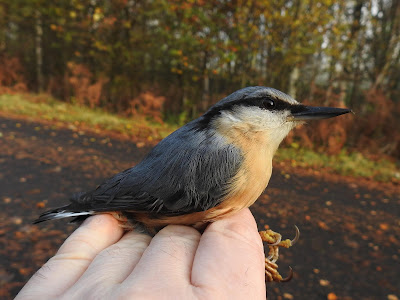 Nuthatch
I say surprisingly for the Bullfinches, as this was the first time I had recorded them at the site. In previous years I haven't spent as much time in winter here as I have this year, so perhaps they are more frequent than I think, because the habitat in the arboretum certainly looks good for Bullfinch.
This morning Alice and I returned to the feeding station to have our first ringing session, and when we put the single sixty-foot net up, we had 4 oktas of hazy cloud, with a fresh south-easterly breeze. In fact, the south-easterly breeze was a little too fresh and it was causing the net to billow a tad, and with it blowing leaves in to the pockets as well! This didn't auger well, and our totals reflected this.
We ringed thirteen birds as follows (recaptures in brackets):
Coal Tit - 7 (1)
Chaffinch - 2
Blue Tit - 1
Nuthatch - 3
Great Tit - (1)
From a birding perspective the location of the new feeding station isn't great, or should I say where we sit in relation to the feeding station isn't great, as we sit on the side of the track leading down the wooded valley, so our field of view is restricted by trees. Therefore, we didn't see a great deal, and it was more a case of hearing things, other than the 45 Redwings that flew over. So, on call we had Long-tailed Tits, Goldcrests, a Jay and a Great Spotted Woodpecker; like I said not great.
I'm hoping that we'll get out ringing at the feeding station next weekend, but I'll call and check it in the week. Also, I have a wintering bird survey starting this week, so I might have a few things to report from there. I'll keep you posted.