The wind had eased and shifted towards NW. After early rain it was mainly sunny. 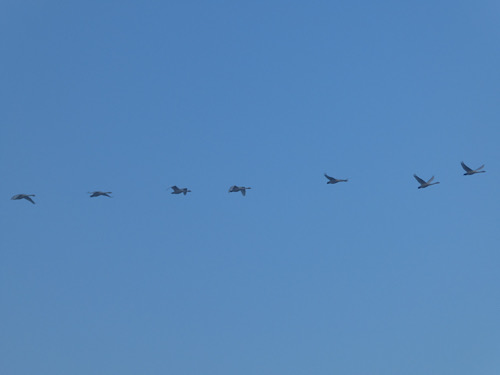 2 more Whooper, later on same line seen by PW
Pinkfoot 31 + 33 south, very high, didn't look like local movement.
From Pete (M) - Grey Wagtail in Dorset - Just had one of our colour ringed Grey Wagtails from this last autumn’s Ringing at Middleton NR, North Lancs seen here! Ringed on 30/8/20 and first seen in Dorset about a month ago.
https://www.nationaltrust.org.uk/hardys-cottage/features/hardys-birthplace-visitor-centre
South shore.
Surprise 1:
As the tide started to flood, this Guillemot was in the shallow channel next to No.1 outflow. Later it waddled out of the water to rest on the beach 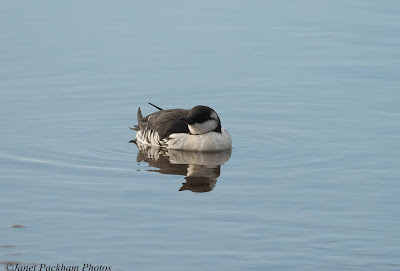 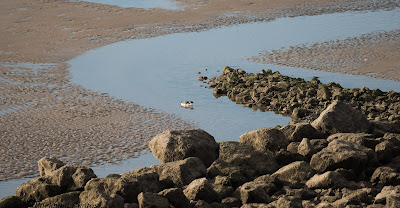 Report and pictures from Janet
Towards high water a visiting birder reported 2 female/immature Black Redstarts on Red Nab, which had then been flushed along the wall by walkers. Myself (MD) and Pete Woodruff were in the area, we split up, and after an hour, relocated them just 30m from the original sighting, on the rocks east of Red Nab. They were very mobile and kept disappearing then reappearing, sometimes two together other times a single bird. By this time we had been joined by Kevin Eaves, and between us managed some record shots.
These two by Kevin 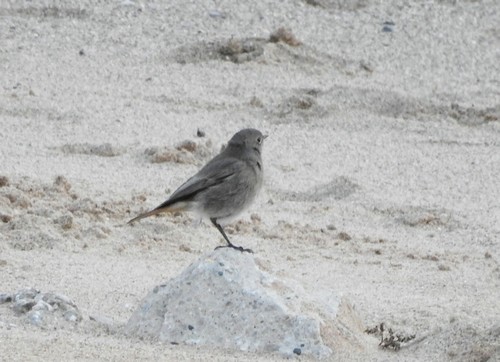 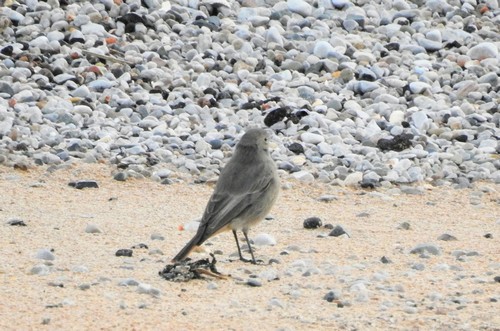 Surprise 2:
Kevin had "both" birds together at Red Nab and looked over to me and Pete who were photographing another 100m away - there were three Black Redstarts! That's why, sometimes we were only seeing a solitary bird.
This first  picture, plus Kevin's above, show how "plain" they can look when stationary 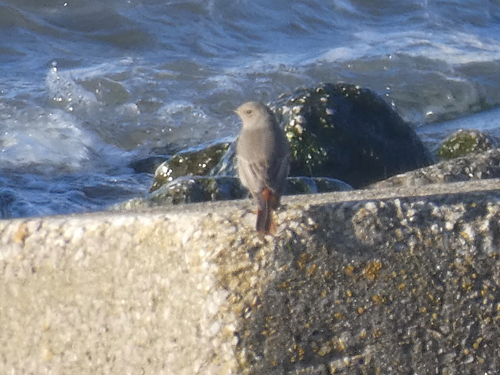 But this one, although rubbish quality, just shows how "startling" they are when they take flight. 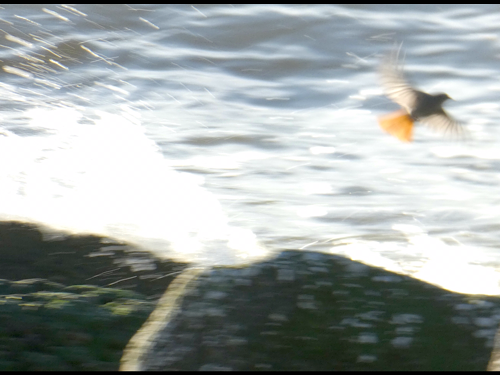 Surprise 3 - at one point just before high water, there were 6 Rock Pipit on and around Red Nab.
This video allows you to hear, one calling in response to other calls. - at one point it appears to be counting all the birds flying around - the background noise is the sea behind me.
And the final surprise:
This video shows just how quickly nature reclaims, what is rightly theirs, when left alone.
This fox casually strolled along the high tide line, out from Ocean Edge, checking for carrion. Ocean Edge has been locked down for two weeks, so only minimal disturbance. It knew I was there, but paid me no heed. Much to my delight!
I imagine that by tomorrow, it will be back to taking pleasure from a walk in the rain.