It's raining - again. An hour of typing then I have to down tools. At 0930 the electricity will be switched off for fifty homes until 1430 for “essential maintenance”.  Get accustomed to it folks. When Princess Nut Nuts gets her way with Boris wind farms will stretch 200 miles along the west coast and beyond until they encircle us.
Then along comes one of those prolonged winter high pressure systems that sits over Britain with zero wind for a week or more and there will be no electricity for us plebs. Unless of  course we build ten Hinckley Point reactors in the next ten years, starting next week. Meanwhile, be warned, “Smart Meters” are a smart way for providers to switch off your lights too.
The week has seen no opportunity for ringing as rain and wind again hold sway over the coming weekend. But we did receive another Lesser Redpoll recovery involving our site at Oakenclough. Ring number ALJ4399 a fresh juvenile Lesser Redpoll ringed at Oakenclough on 12 August 2020 was recaptured by other ringers at Whixall & Fenn's Mosses, Shropshire on 29 September 2020.
This is another quite typical autumn movement of Lesser Redpolls which shows a migratory pattern but yet again does not tell us the place of birth nor the bird’s final destination. 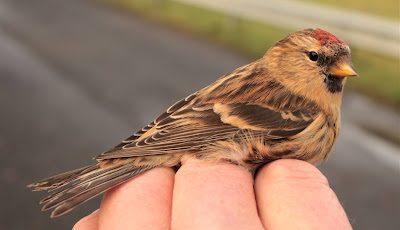 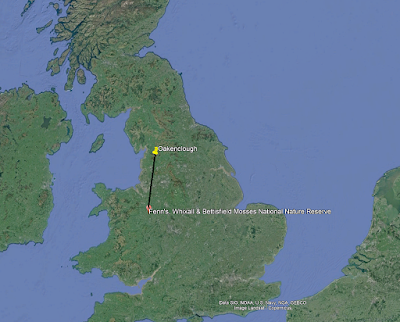 Lesser Redpoll - Oakenclough to Shropshire
On Thursday morning I finally caught up with the elusive Long-tailed Duck at Conder Green. For a week or two the self-same bird had played hide and seek with WhatsApp twitchers by not always being on the anticipated plate.
No need to panic. Although Long-tailed Ducks are pretty scarce, partly due to their status as an ocean-going duck with a diet of mussels, cockles, clams, crabs, and small fish, when one does appear on inland water it will often stay around for weeks. Here on Conder Pool this one may not find much shellfish hence it has probably been flying between the pool and the Lune Estuary 100 yards away.
It had been years since I’d even seen a long-tail but the sleek lines and tiny round head were pretty unmistakable, easy to locate at the far end of Conder Pool where it ducked and dived many times. 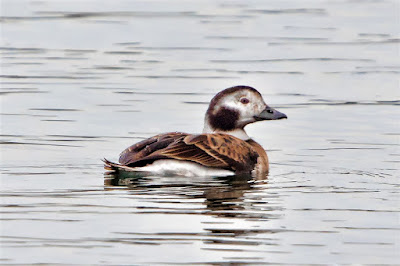 Long-tailed Duck
Other wildfowl and waders consisted of the regular 6 Little Grebe, 2 Little Egret, 90 Teal, 32 Wigeon 18 Tufted Duck, 12 Redshank and 8 Curlew. Passerines were few and far between with a single Meadow Pipit on the outflow looking slightly out of place. 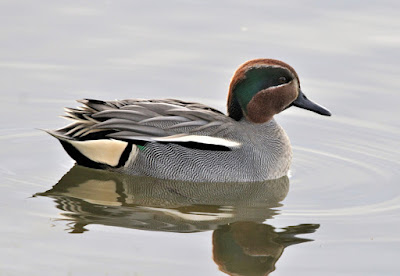 Teal
Both Moss Lane and Jeremy Lane held a few birds on the now established flash floods. Mixed, flighty and distant for the most part were hundreds of Dunlin, Golden Plover, Redshank, Lapwing and Curlew.
There are still very few Fieldfares around with a dozen or so very flighty ones hiding in what's left of the hawthorn berries. A couple of Grey Wagtails flitted around the edge of one especially muddy patch.

Grey Wagtail
At one point there was a Curlew in the road ahead that simply carried on walking rather than flying off as Curlews always do. I climbed from the car and found the Curlew quite easy to pick up from the roadside. Although it seemed lively enough and sported a muddy bill that showed it had been probing for food, it felt bony, thin and light in weight. I put the Curlew over a nearby fence and wished it well as it trotted off through the grassy field. 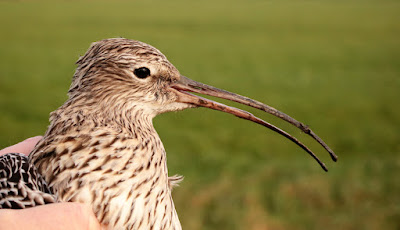 Curlew
At 4 pm and just as it began to go dark the lights returned. The leccy is back on so I hit the PC for the pictures.
Not having the electricity on tap for a while is a little like birding - great when it’s around but you don’t half miss it when it’s unavailable.
Linking this post to Eileens's Saturday Blog and Anni in Texas.