Earlier in the week I was back at one of my wintering bird survey sites in West Lancashire. The conditions were perfect with four oktas cloud cover and a light northerly breeze. Two of my VPs are from my car, parked in a layby on a busy A road. However, the fields to the east of my VPs can be good for wintering Pink-footed Geese, and I do watch them as they are close to home. 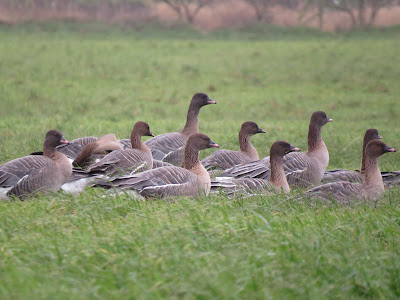 Pink-footed Geese
When I pulled into the first layby, I could see that there was already some Pinkies feeding in the field. Over the next hour, small numbers kept dropping in, and in total I counted 618. On a couple of occasions, I thought I had a Tundra Bean Goose, but it was distant and I kept losing it. Later in the morning I moved round to another location overlooking the next field along from the geese, but I could still see them through some gaps in the hedge, and they were a lot closer. I had just got my scope on the Pinkies through the gap in the hedge and a Tundra Bean popped its head up. A lot closer now, and no mistaking it, so my original thoughts were correct. Unfortunately, they were just too far away for a photo that would make any sense.
Only two raptors here, a Buzzard and a Kestrel. The Buzzard flew in and perched on top of a pylon, and one of the local Kestrels took offence at this and mobbed the Buzzard, but the Buzzard wasn't for moving! 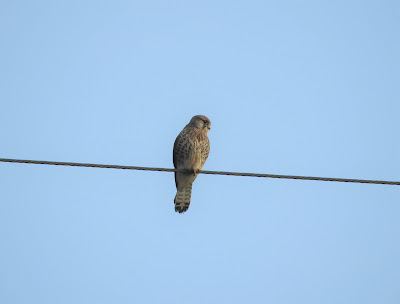 Kestrel
At another section of my survey that involves a transect over some rank grassland and scrub, a Sparrowhawk was perched on top of a building with a Magpie escort. After a few hard stares from the Magpies, the Sparrowhawk was off, and surprisingly it didn't receive any further attention from the black and white bandits. I like Magpies. And I like Sparrowhawks.
It seemed like there had been an influx of Blackbirds over these past few days, as I recorded 15 during my survey, and that is a good number for this site. Reading various east coast bird blogs etc over the past week, and a number of them have been reporting an influx of Blackbirds and Redwings, so that fits in with the west coast always being several days later for the birds to arrive here.
A calling Chiffchaff from the mature hedge was probably the same bird that I recorded here about ten days ago, and is probably over-wintering. I suppose if I record it over the next couple of visits I will know for sure.
I saw an unusual bird perched, well awkwardly stood really, in a Hawthorn this morning in the form of a Moorhen. It had flown/clambered up into the Hawthorn to reach some rose hips on the rose sp. that was using the Hawthorn as scaffolding. What made me laugh was the way it attempted to walk through the Hawthorn flicking its tail and bobbing, as if walking along the ground.
The Snipe were in the usual position roosting on the Bramble covered concrete hard standing, and the picture below shows where they are roosting by the number of droppings on the ground. 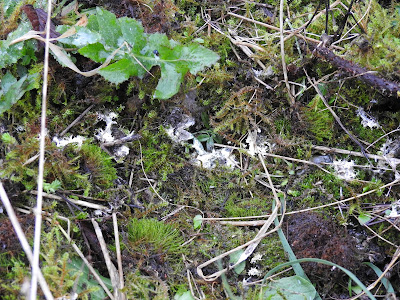 Snipe poo!
The weather didn't play ball last weekend, and it was dreich at best, and not good for any ringing at my Bowland feeding station. I did call to the top feeders up however, and caught the Roe Deer in the picture below taking seed from one of the feeders! The feeder was obviously at perfect deer height! 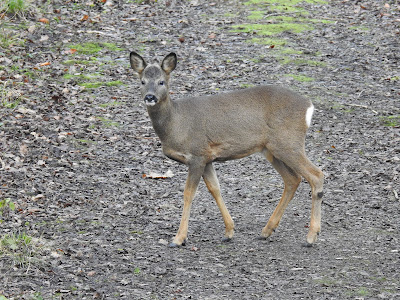 Roe Deer
I am hoping that the weather will be okay for this coming weekend, and that we can get some ringing done.