It's funny how quickly a site that you are undertaking a series of wintering bird surveys at, becomes almost like a patch. It will usually be a site that you have never visited before, it might not be the best site in the world, but after you have completed somewhere in the region of twelve surveys, with a minimum of 36 hours observation time, it becomes familiar, you get to know it fairly intimately, and you sort of, start getting patch ticks. And then it's over, the survey period has finished and you never return. I like to call them temporary patches.
I have one such patch this winter in west Lancs, and I have mentioned it before, it's the one with a bit of a marsh. I was there earlier in the week, on a reasonable morning with three oktas cloud cover and there was a light south-easterly wind. I also had a patch tick too!
I walked along the busy road to where I access the site down a bramble covered embankment and on to the first, now quite wet, arable field. It's always a relief to get away from the road, as the noise from the traffic does actually hurt my ears. There's a bit of a ruined orchard that I walk past, orchard might be too strong a word as there is literally a couple of apple trees, and a Song Thrush called from here, barely audible above the traffic noise.
I dropped down onto the field, and a number of Pink-footed Geese flew overhead, 128 to be precise, and then I headed north along the edge of the marsh to my VP. As usual I could hear Teal, Mallards, Moorhen and Water Rail calling, but it was the bird perched up on some Bramble and Willowherb stems that drew my attention. A male Stonechat, and a new species for this temporary patch! Another bird flew past me low, perched up, and it was a female Stonechat. So, a pair of Stonechats new to my temporary patch and I was made up! 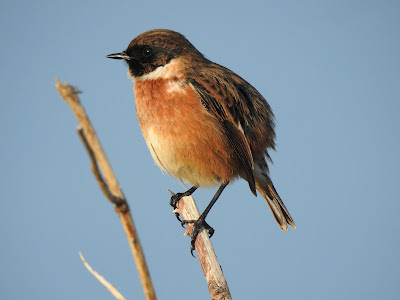 Stonechat (male above & female below) 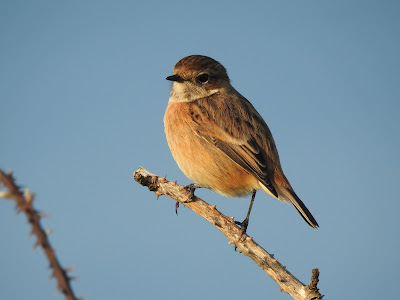 There were a few birds on the stubble field again, including 138 Woodpigeons, 74 Black-headed Gulls, 53 Herring Gulls, twelve Fieldfares, 86 Starlings and three Stock Doves. A Buzzard, and a female Sparrowhawk were causing a bit of mayhem this week over the stubbles.
I've got one more survey to get in, and that's me finished for the Solstice festivities until the New Year. Fingers crossed for some decent weather to get out birding or ringing, or maybe even both!