Although it's a little late, I would like to wish you all Seasonal Greetings, and hope that you enjoyed the solstice. Now that we are beyond the shortest day, and into the new year, we can celebrate the return of the light, and already the sun is setting nearly five minutes later!
On Christmas eve I visited my Bowland feeding station to top the feeders up, erect another feeder for sunflower hearts, and put some seed on the ground, along with some apples. It was a glorious morning with crisp, clear blue skies and a light northerly wind.
There were plenty of birds coming to the feeding station including 26 Chaffinches, 7+ Coal Tits, 2+ Nuthatches and five Goldfinches. As it was such a lovely morning, I decided to go for a walk up the valley along one side, and back down to the feeding station along the other. 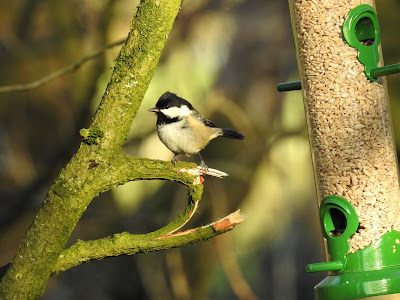 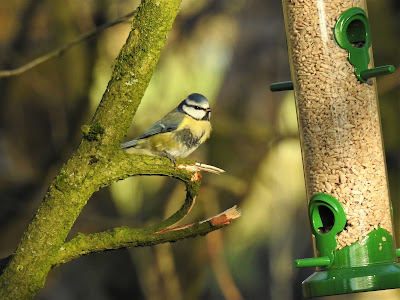 I didn't expect to see much, as it is mid-Winter after all, but it was just a pleasure to stretch my legs. Not long after I had set off, I flushed a Roe Deer, that ran a short distance and stopped to look back at me, before heading out of sight through the wooded valley.
On the eastern edge of the woodland, I came across a standing dead Birch tree with a community of Piptoporus betulinus, common names Birch Polypore or Razorstrop Fungus, growing on the decaying trunk. It takes its common name from an old use for sharpening razors. See pictures below. 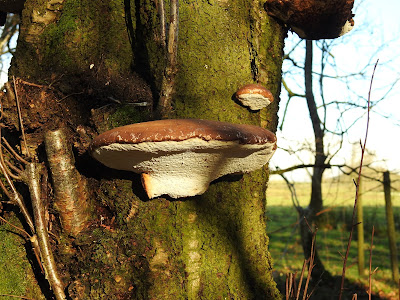 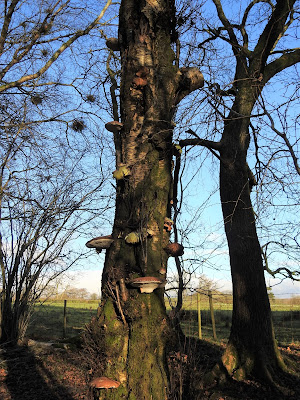 Further along my walk, I came across two males and a female Blackbird, and one of the males was a lovely sooty continental bird. Six Mallards on the pond at the top of the valley, and it was time to head back down.
On Christmas day I headed to the Point for an hour and a half to have a look on the sea as there was a tide. The sea was like a mill pond, but due to the differences in temperature between the relatively warm sea, and the cold air there was a slight heat haze. It's a pity, because without the heat haze the visibility would have been even better, even though it was already fairly good.
On the shore I recorded Turnstones, Sanderlings and Ringed Plovers, but the only species in any real numbers was the 128 Oystercatchers. A pair of Stonechats flitted along the dunes and across to the shore to forage for invertebrates as I walked along the path heading to my watch point. 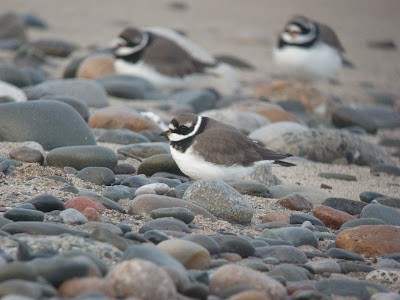 Ringed Plover
There were too many jolly people around for my liking, and numerous people wished me a Merry Christmas. That was very nice of them, but as somebody who doesn't really celebrate Christmas I would rather they would have left me alone. I'm not critical of anybody that does celebrate Christmas, but it's not for me. And anyway, when I am out birding, I just want leaving alone so I can concentrate on what I am doing and 'get in the zone'. I'm not complaining, honestly...well, maybe just a bit!
As for Christmas eve it was quiet, but again a pleasure to be out, and on the sea all I had was two male Red-breasted Mergansers, 20 Eiders, five Red-throated Divers, a Shelduck and a Common Scoter. 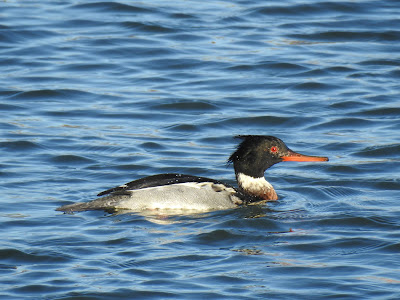 Red-breasted Merganser
The forecast is looking reasonable for next week, and I am hopeful of getting out birding, ringing and surveying!